On Boxing Day or St Stephens Day as they call it in Switzerland we started our journey to St.Moritz. Elvis, Steve and I left the house about 7.30am and walked down to the Post Office in Buochs to catch the bus to Stans where we then caught the train in the direction of St. Moritz. We had a few train changes along the way and Karin got on the train in Ziegelbrücke. We got to Zouz at 1pm and checked into our accommodation for the night. We had a wander around the village before catching the train onto St Moritz which is about half an hour from Zouz. 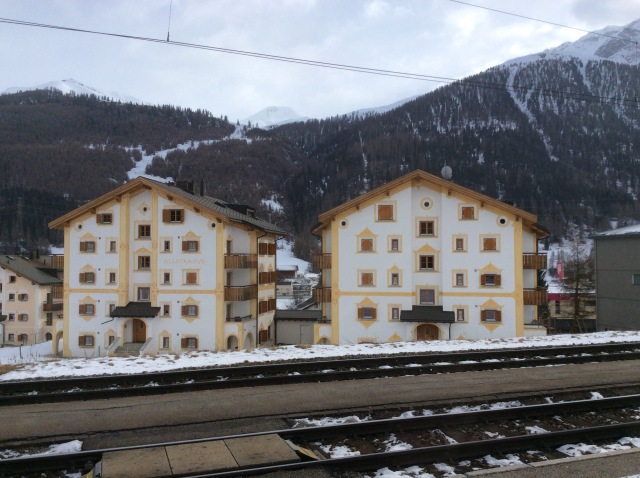 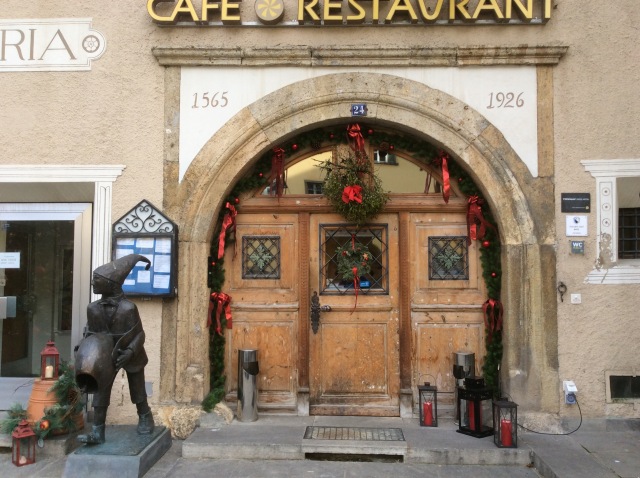 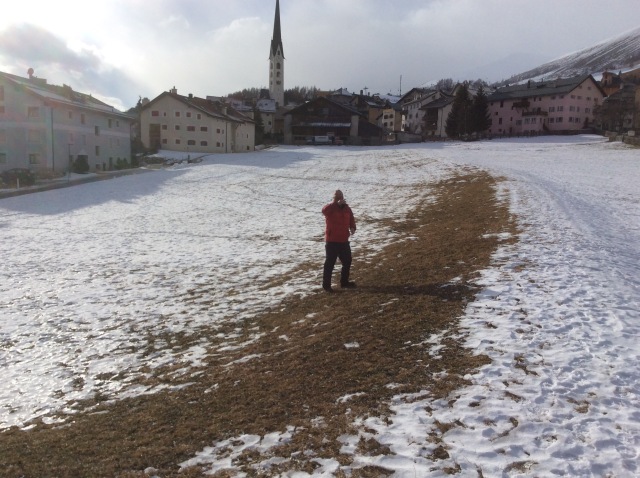 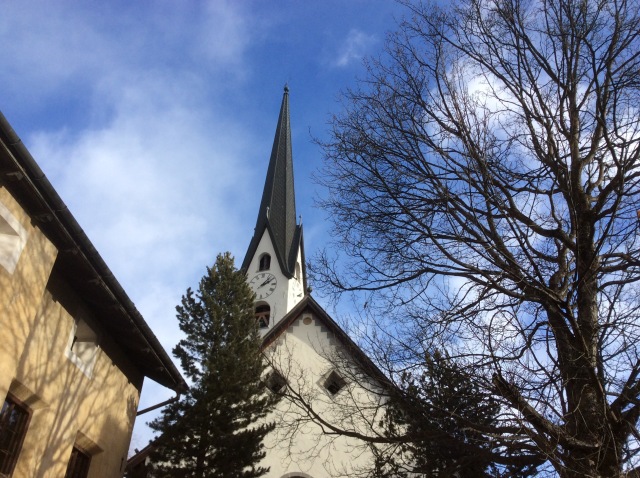 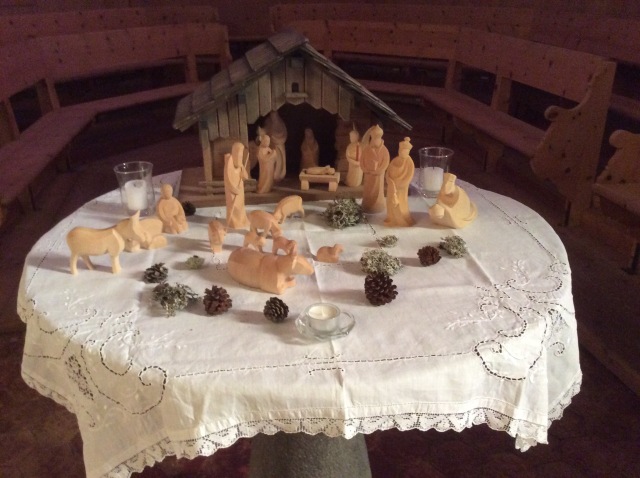 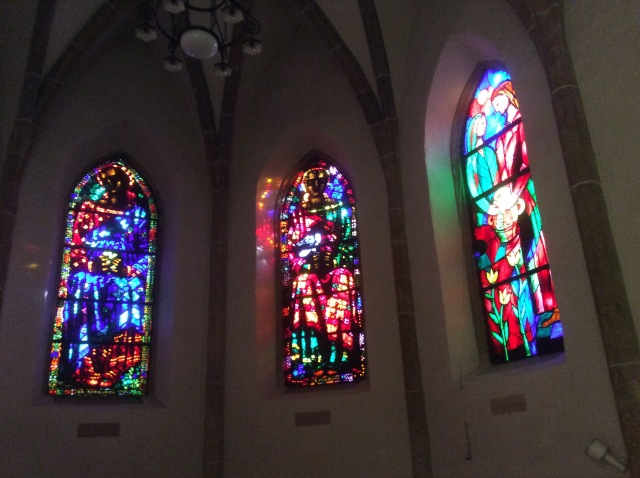 St. Moritz is a resort town in the Engadine valley in Switzerland. It is a municipality in the district of Maloja in the Swiss canton of Graubünden. The highest summit in the Eastern Alps, the Piz Bernina, lies a few kilometres south of the town. St. Moritz hosted the Winter Olympics in 1928 and 1948. It is a popular destination of the upper class and international jet set, as well as one of the most expensive ski resorts in the world.

Thanks to its favorable location, St. Moritz enjoys over 300 days of sunshine a year. Every winter it hosts the “White Turf” horse race on the frozen Lake St. Moritz attended by the international Upper class.

Popular pastimes include skiing, snowboarding, and hiking, and nearby there is also the world famous Cresta Run toboggan course.

The year-round population is 5600, with some 3000 seasonal employees supporting hotels and rental units with a total of 13,000 beds. 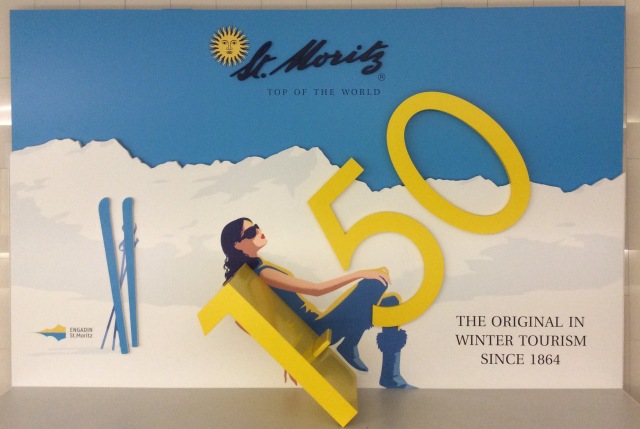 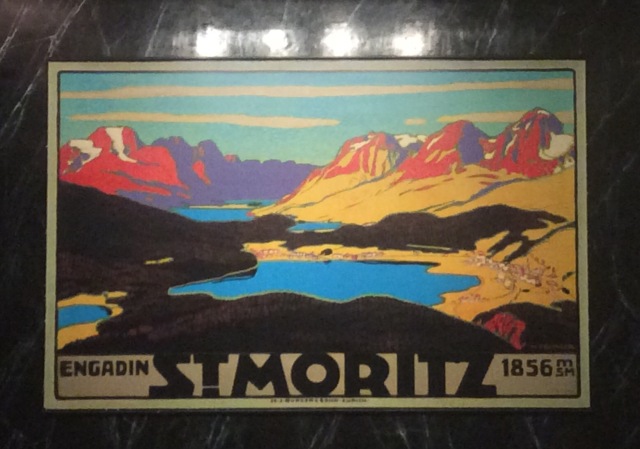 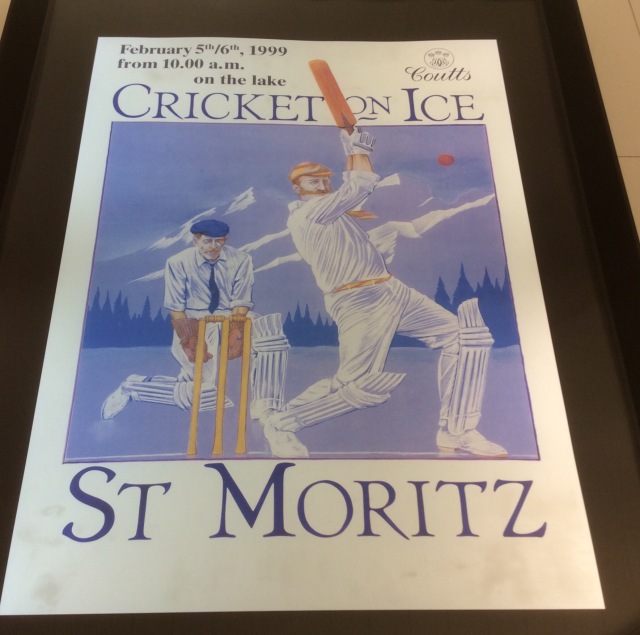 We got off the train and wandered along Lake St. Moritz of which the outer edges were frozen. Steve was quite fascinated by this and went down to get a closer look. The sun was shining but it was pretty chilly. I kept taking my glove off to take photos and it didn’t take long for my fingers to feel sore because they were so cold. We then walked into town to check out all the fashionable people and high end designer stores. Fur is back in fashion so we saw a lot of people with some degree of fur on. 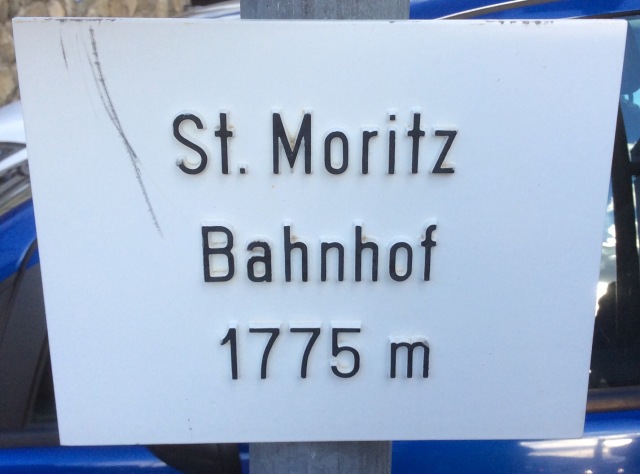 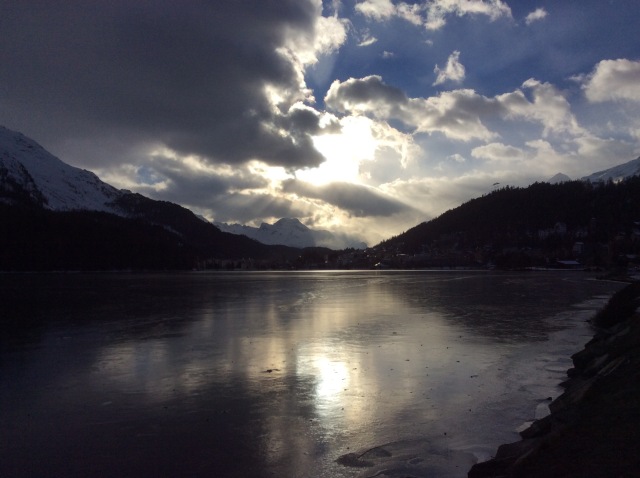 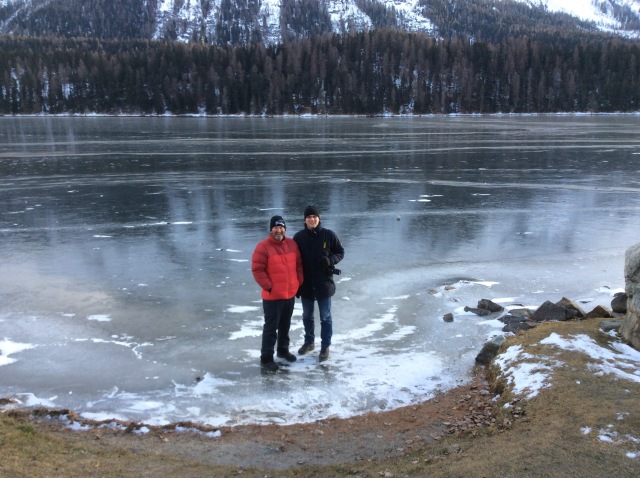 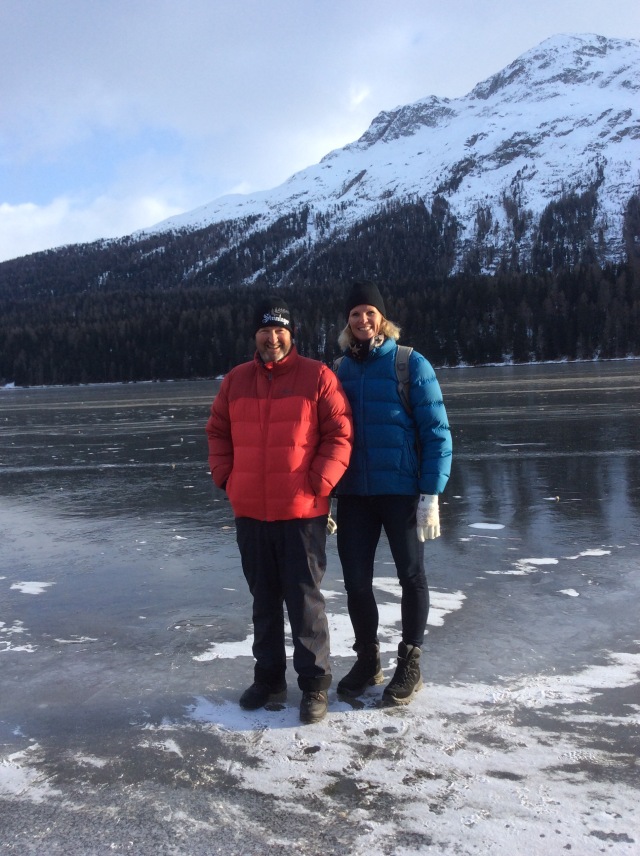 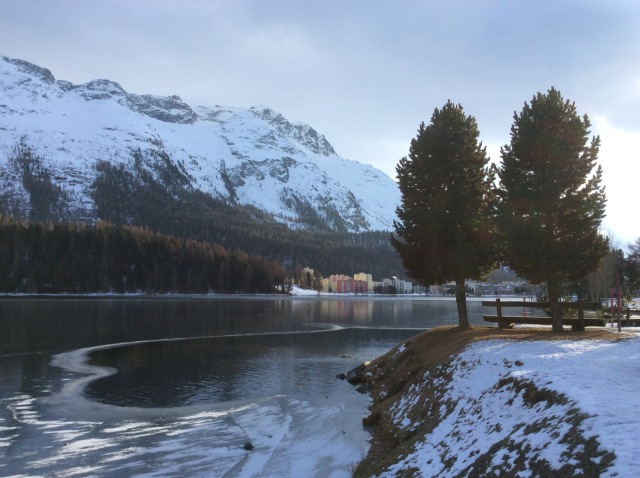 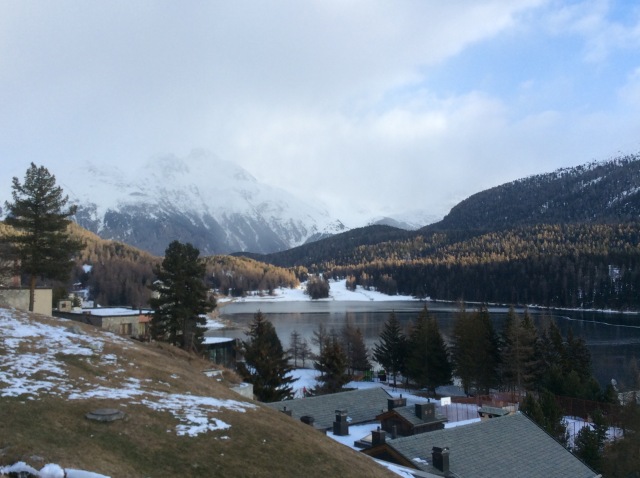 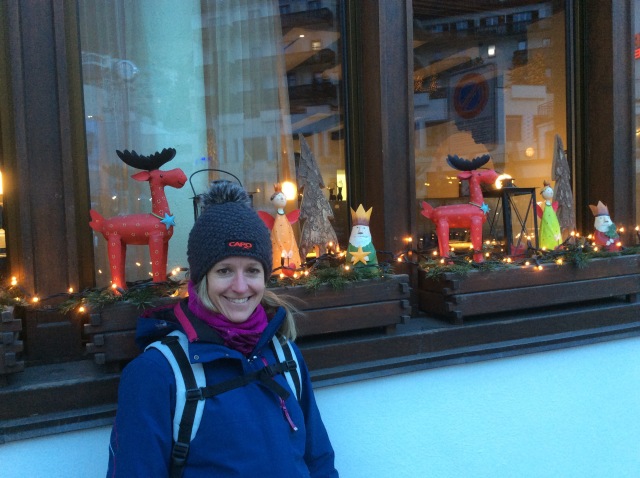 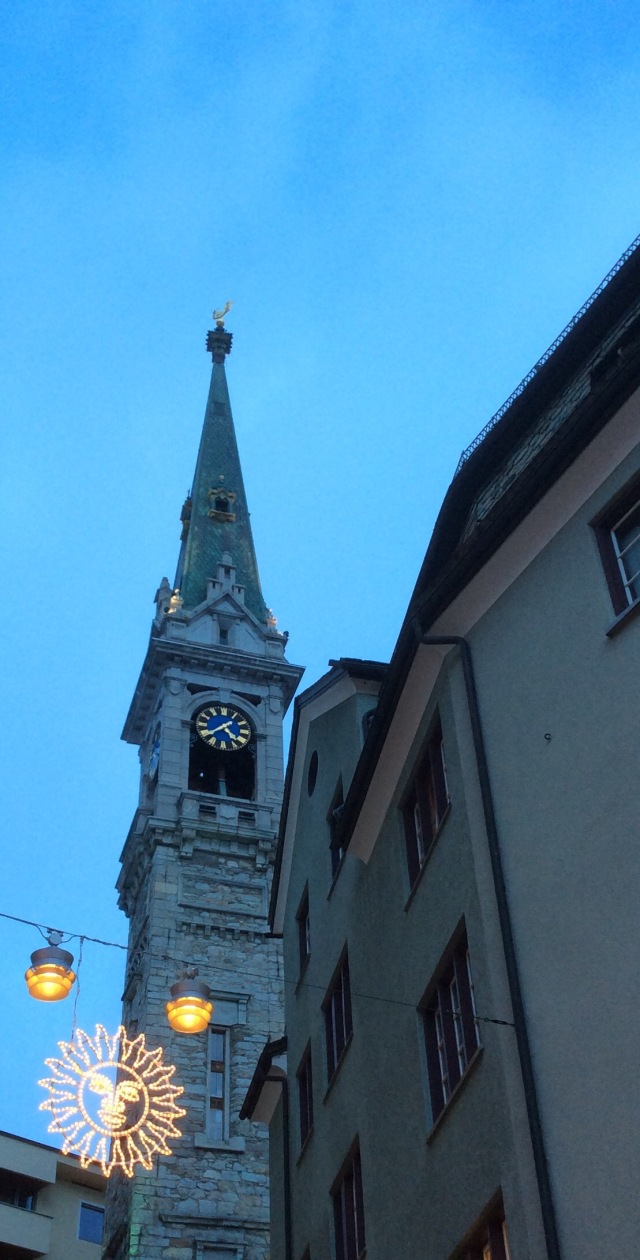 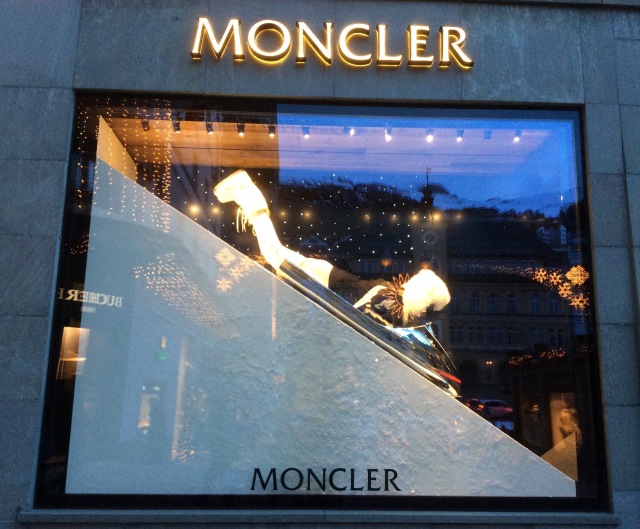 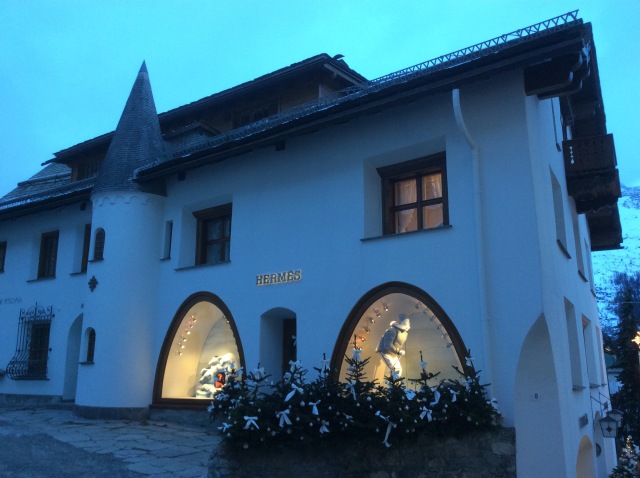 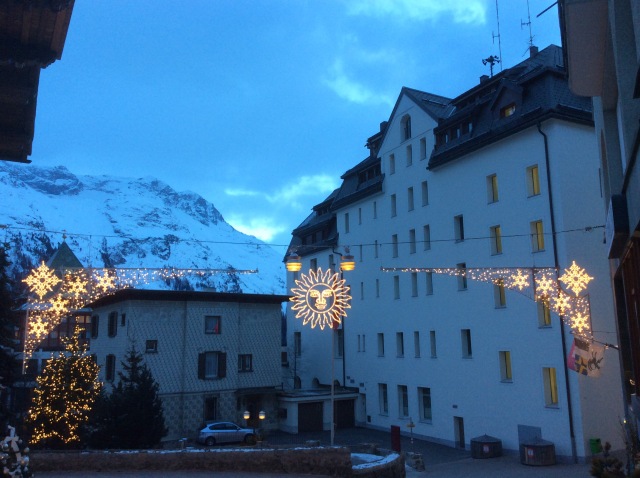 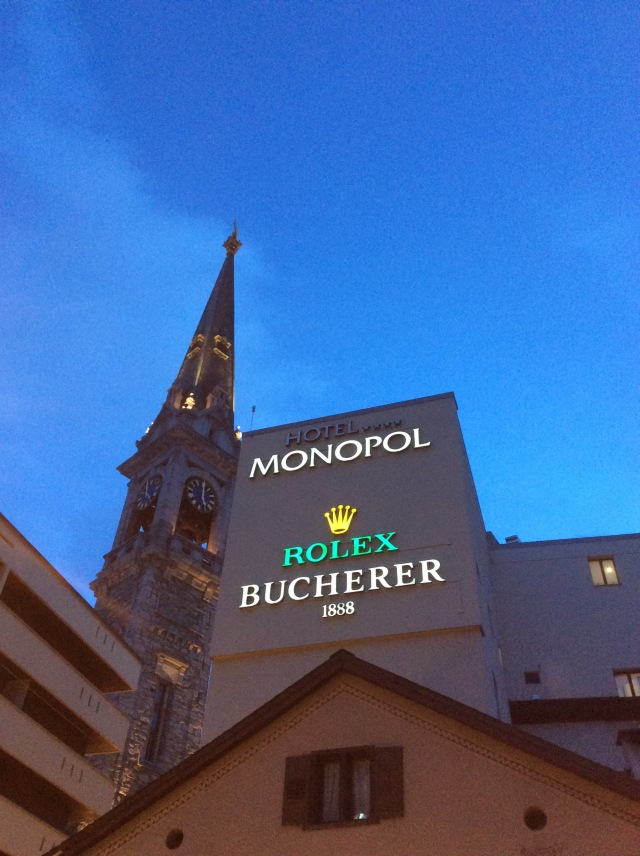 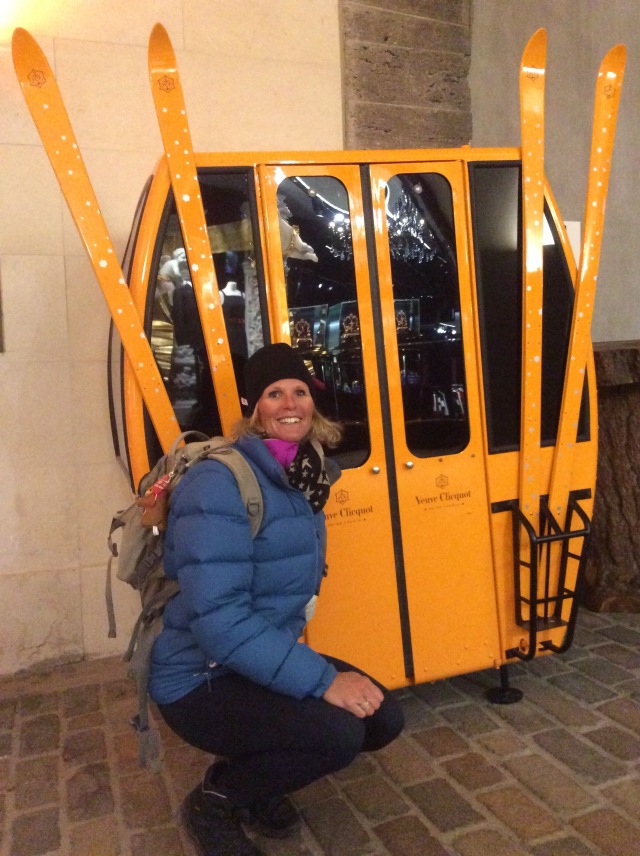 We had an early dinner at La Stalla which was very nice. Steve has a new nickname – Dino, as in Dino from the Flinstones. This is due to his excitable nature around new people : ) On the children’s dessert menu they had Dino sundaes – Steve had a chocolate one and then the maitre de asked him if he would like to keep the cup which of course he did. We now have one Dino cup making it’s way to NZ. 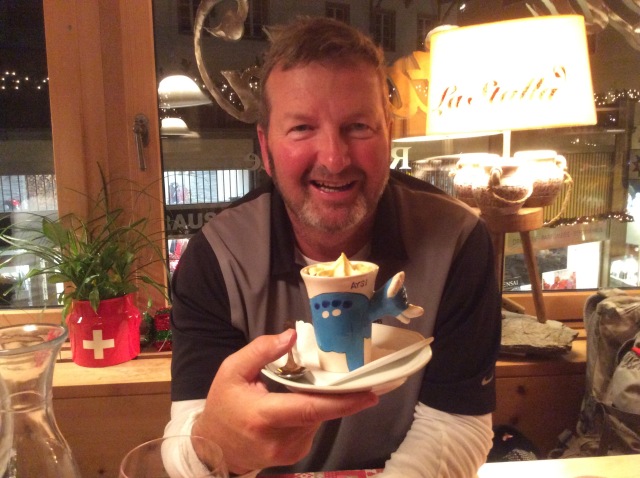 Before dinner we walked to the Badrutt’s Palace Hotel which is a historic, internationally renown luxury hotel where the rich and famous stay – we thought we might spot a celebrity or two but they were obviously all drinking champagne and eating canapés in one of the seven restaurants in the hotel. Apparently there is an American family who book the Presidential suite for the two weeks over Christmas and New Year every year at a cost of about USD500,000. They only turn up for a few days of that two weeks just so that they have been seen in St.Moritz over that period – it’s all about the image. When we were down by the lake we saw a few private jets flying in. 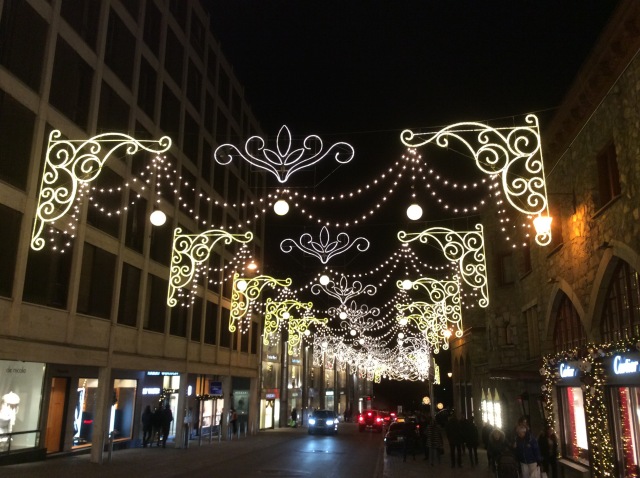 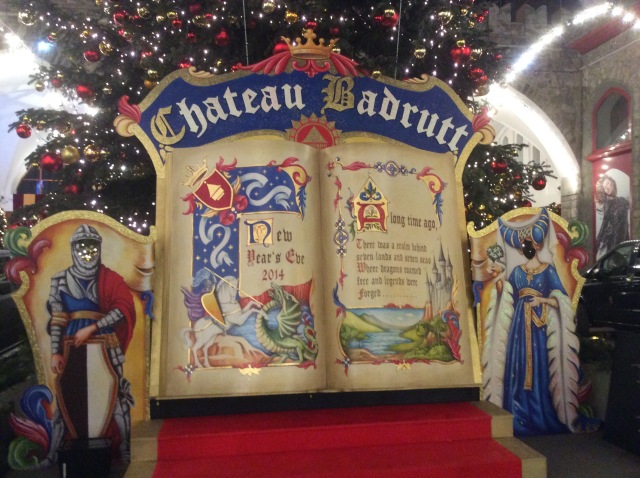 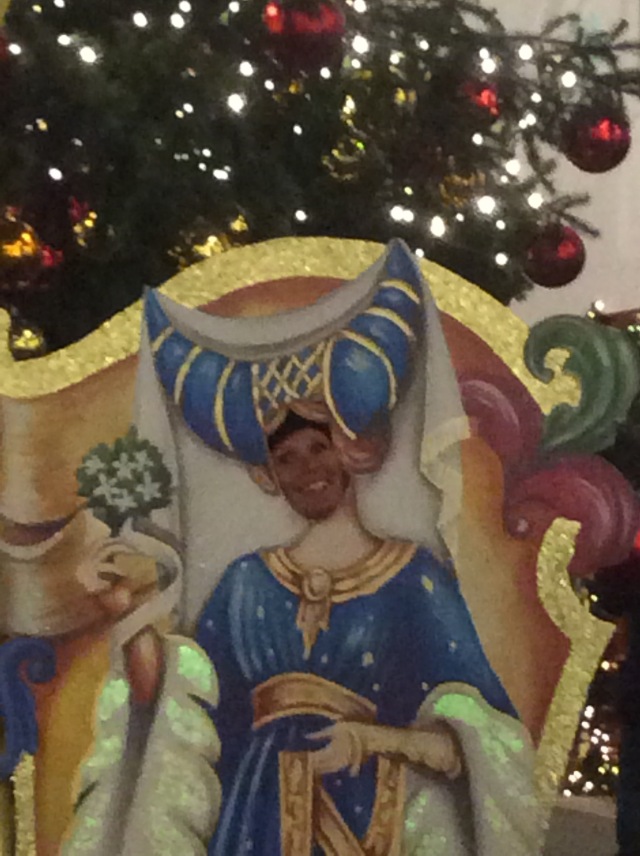 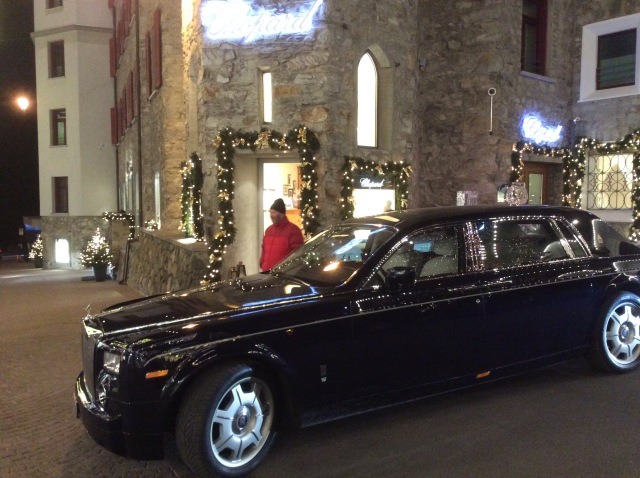 Although it received some visitors during the summer, the origins of the winter resort only date back to September 1864, when St. Moritz hotel pioneer, Johannes Badrutt, made a wager with four British summer guests: that they should return in winter and, in the event that the town was not to their liking, he would reimburse their travel costs. If they were to find St. Moritz attractive in winter, he would invite them to stay as his guests for as long as they wished. This marked not only the start of winter tourism in St. Moritz but the start of winter tourism in the whole of the Alps. The first tourist office in Switzerland was established the same year in the town. St. Moritz developed rapidly in the late nineteenth century; the first electric light in Switzerland was installed in 1878 at the Kulm Hotel, and the first curling tournament on the continent was held in 1880. The first European Ice-Skating Championships were held at St. Moritz in 1882 and the first golf tournament in the Alps held in 1889. The first bob run and bob race was held in 1890. By 1896, St. Moritz became the first town in the Alps to install electric trams and opened the Palace Hotel. A horse race was held on snow in 1906, and on the frozen lake the following year. The first ski school in Switzerland was established in St. Moritz in 1929.

In 1928 St. Moritz hosted the 1928 Winter Olympic Games and the stadium still stands today. It later hosted the 1948 Winter Olympic Games. St. Moritz has hosted over 20 FIBT World Championships, three FIS Alpine World Ski Championships (1934/1974/2003) and over 40 Engadin Skimarathons since 1969. It has also hosted many other events since, including some unlikely ones on the frozen lake in the 1970s and 1980s such as a golf tournament, (1979), a polo tournament (every year in February starting in 1985) and cricket (1989). St. Moritz has also been the venue for many Sailing and Windsurfing World Championships.