On Tuesday the 18th August we went next door to play golf at the Da Nang Golf Club.  It is situated on the fledgling central coast of Vietnam amid 150 hectares of dunescape similar to what the world’s first golf courses were carved from.  It’s chief feature is a 7,160-yard, 18-hole, links-style layout that was designed in the true spirit of the game — blown-out bunkers, firm and fast fairways that bleed gently into wild seaside vegetation, rugged waste areas, swales and hollows — by Australian golf legend and former world No. 1 Greg Norman.

When Greg Norman checked in on the progress of the Dunes Course, in March 2010, he said: “The fact is, you’d be doing a very poor job to make a boring course out of a site like this.” Certainly Mother Nature had a gigantic hand in the formation of a layout that evokes an experience often found in seaside courses in the British Isles and southeastern Australia.

When it comes to professional golf achievements, few players in the history of the game are in the same category as Greg Norman. During his prime, he won 86 international titles, including two British Opens. In 1987, The Shark (as he came to be known) took his profound knowledge of the game and made the official jump into the design industry. He formed Greg Norman Golf Course Design (GNGCD) and the rest is history.  Over the past quarter century, GNGCD has created more than 70 courses on six continents and established a reputation for imaginative designs that acknowledge golf’s traditional origins and the landscapes on which it has been played.

Da Nang Golf Club’s Dunes Course is the first true links style course in Southeast Asia. Its tapestry of Old World features is reminiscent of the traditional links courses of the UK, while its indigenous surroundings call to mind the acclaimed courses of Australia’s Sandbelt region.

The Dunes Course certainly has a different feel to it’s neighbour – Montgomerie Links, which in my mind is a more classical, pretty course.  We started on the tenth hole which is a little daunting as you look down the fairway and are greeted with sand dunes jutting out on both sides of the fairway.  After you are reunited with your tee shot you realise there is actually more room than you think.  The hole reminded me of the first hole at Doonbeg Golf Club on Ireland’s West Coast – although that hole had an elevated tee block and the Atlantic Ocean down the left hand side.

The fifteenth, sixteenth and seventeenth holes are on the ocean side of the road which are reached by an under road tunnel.  The par three sixteenth is the course’s signature hole – you hit towards the ocean and a back drop of the Cham Islands.

We all enjoyed the course and the Caddies were all very interactive and lots of fun.  They were all in there early twenties and single (very unusual in Vietnam).  Of course they all loved Paul but we had to let them down gently when we told them he was spoken for ; ) 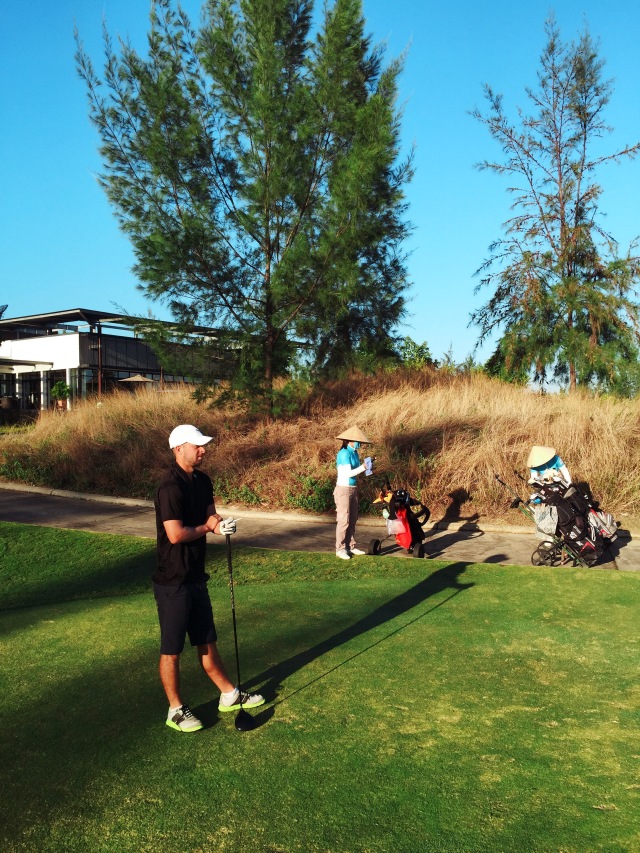 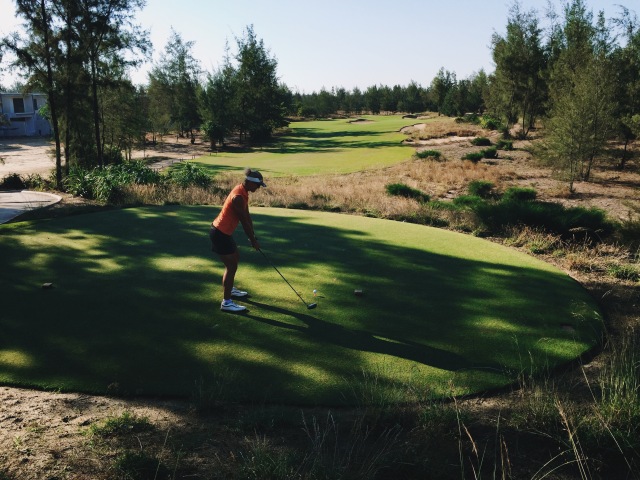 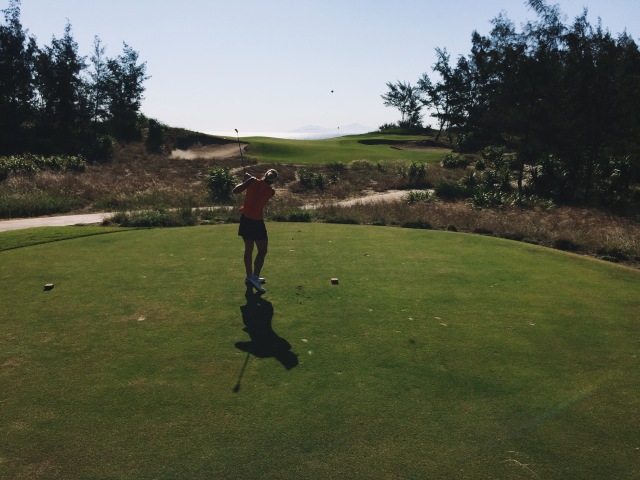 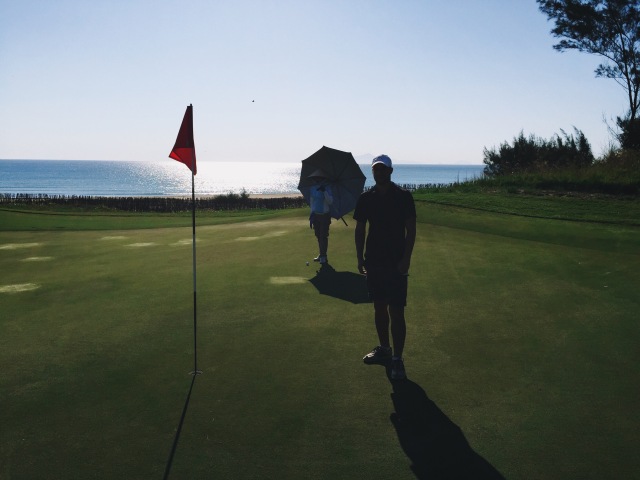 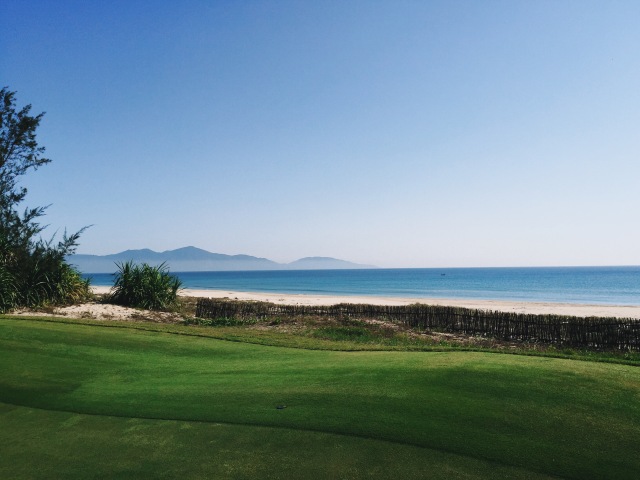 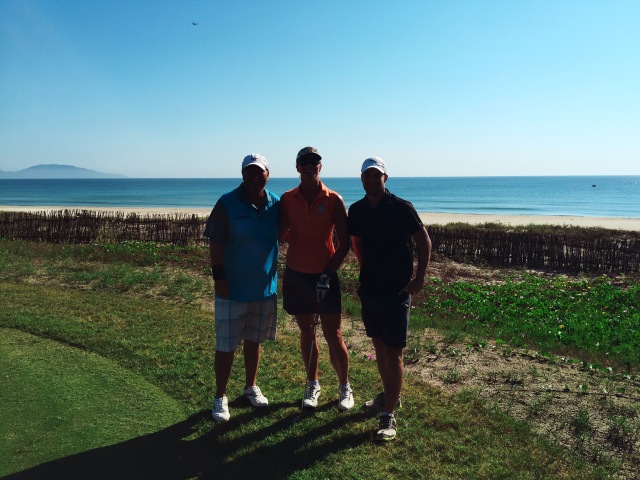 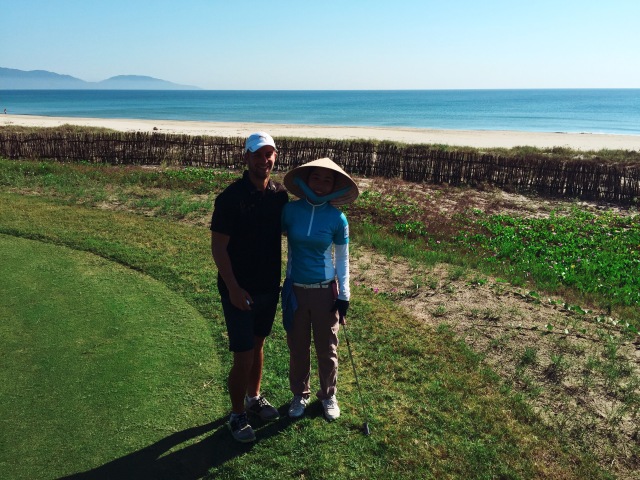 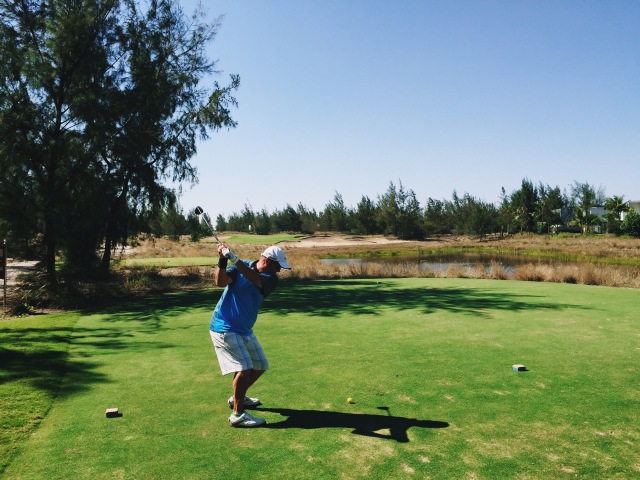 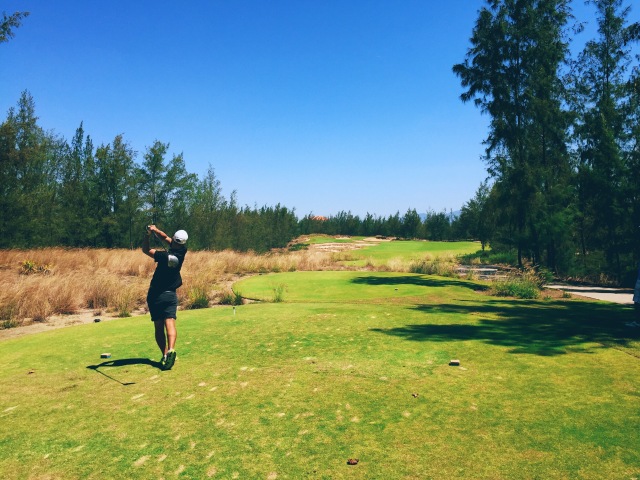 This blog was originally set up to share our 9 month adventure around Europe and the USA with friends and family in 2014. On returning to NZ in January 2015 I decided to carry it on so I could continue to share any future travel adventures - it has become my electronic travel diary. I hope you enjoy and get inspired to visit some of the wonderful places we have visited.
View all posts by SUNGRL →
This entry was posted in Danang, Vietnam and tagged danang, dananggolfclub, gregnorman. Bookmark the permalink.