Steve was adamant that he didn’t want to spend his birthday in June at home in the depths of winter.  I am always wanting to go to new places but all the places in Asia that we looked at didn’t work for some reason or other.  One of my favorite places to re visit is HoiAn in central Vietnam – we spent two months there back in 2015 and it was certainly no chore going back there.  The food is the number one drawcard for me – it is so fresh and flavourful.  I couldn’t wait to get amongst it again.

When we visited in 2015 we stayed out at Montgomerie Links, a golf club about 25 minutes out of HoiAn.  This time we decided we wanted to be closer to the action so we could explore the old town on a whim.  We chose to stay at the Little HoiAn Central Boutique Hotel and Spa and it turned out to be a great choice.  The hotel wasn’t too big, the rooms were spacious, the pool area was nice and the staff were great.  It was about a 10 minute walk to town which was perfect.

Steve’s birthday was extra special as he was lavished with gifts by the hotel staff, some of whom gathered to sing happy birthday to him.  We insisted on sharing the cake with them even though they wanted us to eat it all – we told them it was a NZ tradition to share the cake.  Crikey I was having enough trouble with food consumption without having to eat half a cake!  Special thanks to Suzy who is one of the front office superstars at the hotel – she looked after us so well : ). She organised our transport to the golf club each day and although it ran smoothly most of the time we had a couple of hitches with the driver going to the wrong golf course.  Steve had also booked for Laura to come and stay later on in our stay and the hotel mixed the dates up.  Steve went to sort it out and Suzy told him that he must have made a mistake as he is an “old man” – he of course took great delight in showing her that they had made the mistake not the “old man”.  It became a standing joke after that. 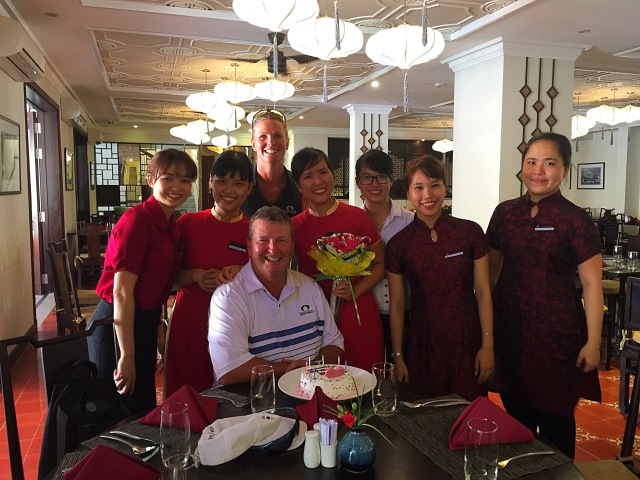 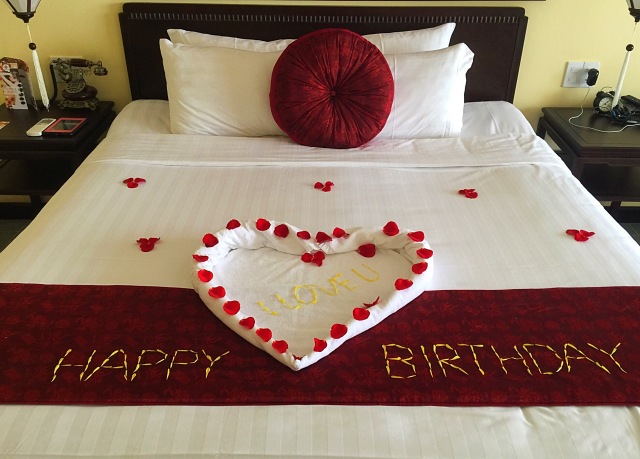 As you know we very rarely travel without our golf clubs and this time was no exception – it was the Golfnut’s birthday after all.  We played seven rounds of golf while we were up there – four at Montgomerie Links and three at Danang Golf Club which is the Greg Norman designed course.  It was lovely to see all our friends at Montgomerie Links – we had lunch with Miss Hang and Miss Van one day – Miss Van works at the Bana Hills Golf Club now but made a special effort to come for lunch.  I had contacted our favourite caddies prior to the trip but unfortunately my one, Hoa had just left but Steve’s one Tinh was still around so she caddied for him every round at Montgomerie.

We also played with some nice guys who were all golfing alone on the various days we played – Brad and Ray from Australia and Gerry, originally from Ireland but now residing in Hong Kong with his Korean wife who spoke fluent Russian and whom he is convinced is a Russian spy : ). She joined us for lunch one day – if she’s a Russian spy then she has a very good sense of humour – she was good chat : ) 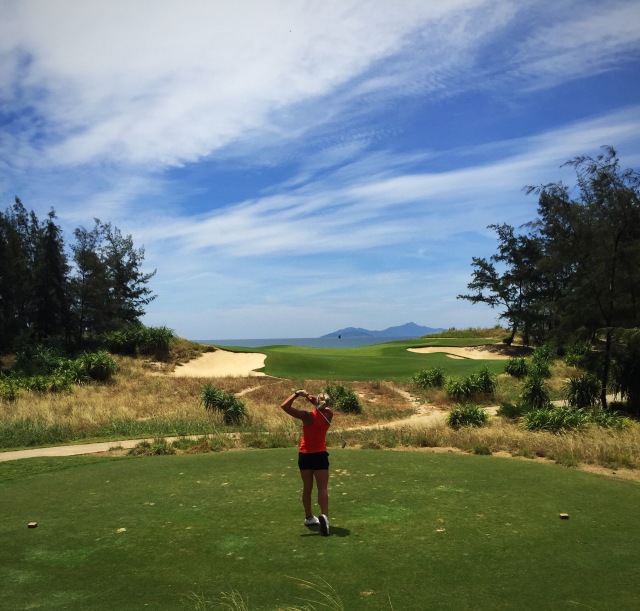 I revisited all my favorite spots around town and was surprised as to how busy it was and how many more coffee places there were.  HoiAn Roastery had one cafe when I was there in 2015 and there must be at least four now and the same with CocoBox, the farm shop.  The tourists are obviously recognising the quality of the food and drinks at these places which has led to the expansion.  I also went back to Highlands Coffee and the same guy who used to give me love hearts on my coffee was still there and he remembered me – apparently he has worked there for five years.

We were recommended a new sports bar down by the river – 3 Dragons Sports Bar which was great to watch the rugby at.  It’s not open like the HoiAn Sports Bar so is cooler and the air conditioner units work a treat.  We enjoyed watching the All Black’s beat the Lions in the first test there and the food is pretty good.

The guy that owns the 3 Dragons recommended a new restaurant to us called the Red Dragon – it is a little bit out of town but taxis are so cheap it is not a problem.  It was sensational – family owned and run and you can see them preparing the food.  The menu is not large but what they do offer is top quality and so delicious.  The tofu and mango fresh spring rolls were to die for as was there take on bruschetta.

One place I meant to visit last time we were there was Dingo Deli – this is owned by the guy that owns the HoiAn Sports Bar and is a delicatessen as well as a cafe.  Again the food was delicious but more European than Vietnamese.

The Red Dragon doesn’t have a website but is located at 332 Cửa Đại, Cẩm Châu, Tp. Hội An.

We also re visited our favourites – 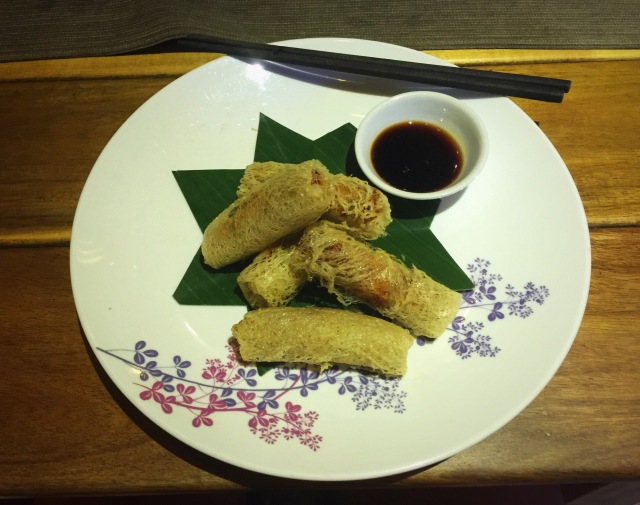 Ashleigh’s parents Con & Louise were travelling in Vietnam at the same time so we met up with them for a few days in HoiAn.  They hadn’t been there before so we showed them around a little.  We watched the second Lion’s test with them – you know the one where we lost!  That was a bit of a downer but we had hot weather, great food and sights to see so we couldn’t dwell for too long : 0 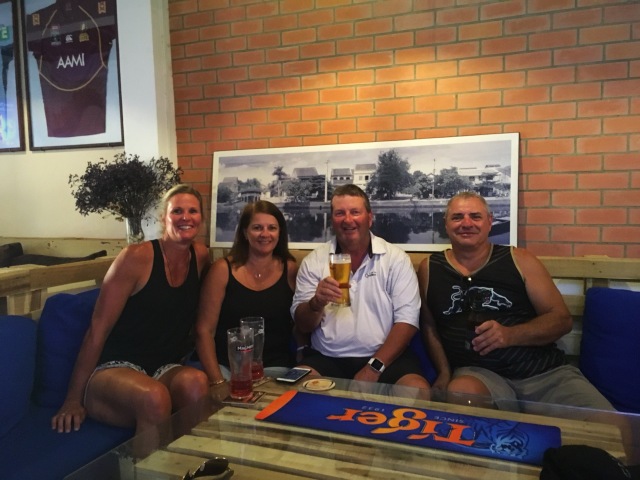 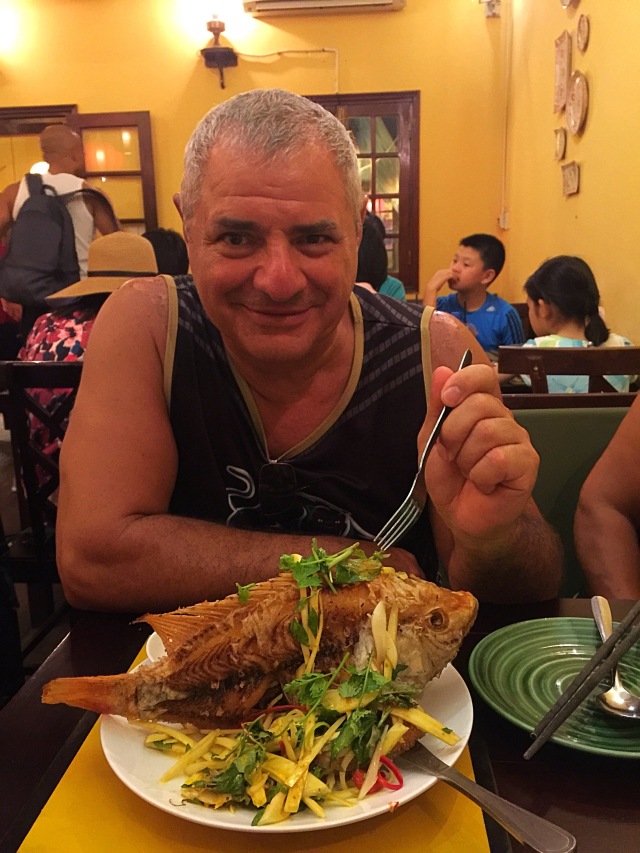 On the Sunday night before they returned home we went out to the Intercontinental Hotel on the other side of Danang for dinner.  We had visited there two years previously and it is pretty cool.  Citron Restaurant which sits on the top level has these upside down Vietnamese hats floating above the water that you dine in.  Unfortunately you can’t book them now so it is first in first served.  We decided to get there for 5pm which is when the restaurant opened for dinner.  What we didn’t know ist that they also do a high tea so all the “hats” were occupied and we went on the waiting list.  We got a drink and kept a close eye on proceedings.  It didn’t actually take too long before we were moved into a “hat”.  It was a lovely evening and we enjoyed a nice dinner before having a look around the resort.

Check out my previous blog for more info on the Intercontinental – 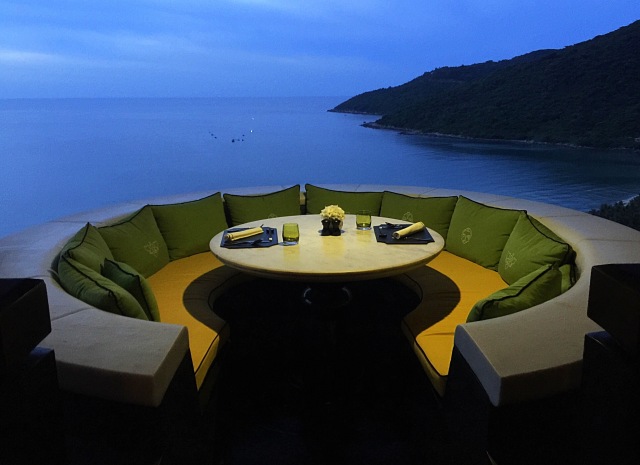 Laura and her friends Rachel & Georgina arrived on the Sunday night while we were dining at the Intercontinental.  They had been travelling around Asia and timed there visit to HoiAn while we were there.  We enjoyed spending time with them and enjoying more delicious food.  Laura had spent a few weeks in HoiAn earlier in the year so had some more good eating suggestions.  One afternoon we used the hotel bikes to bike down to the markets where we enjoyed avocado and mango smoothies – delish!  I had always been a bit nervous about biking around in HoiAn but it was so cool – wish I had discovered it earlier.  It was so hot that biking was a better option due to the breeze generated. 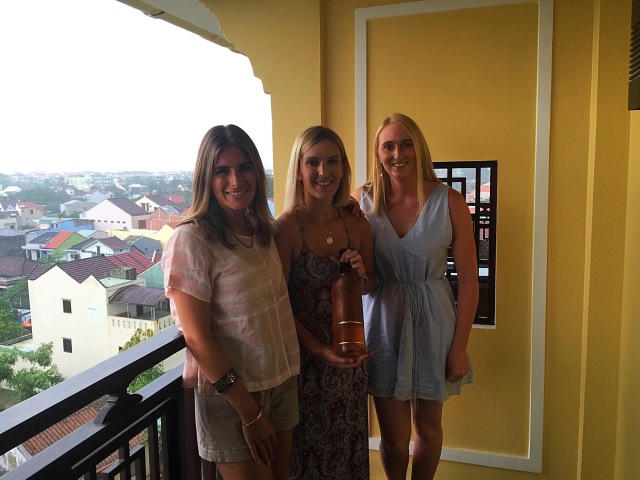 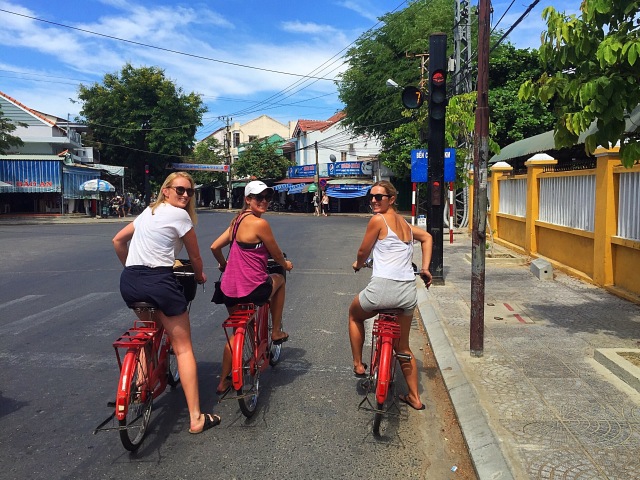 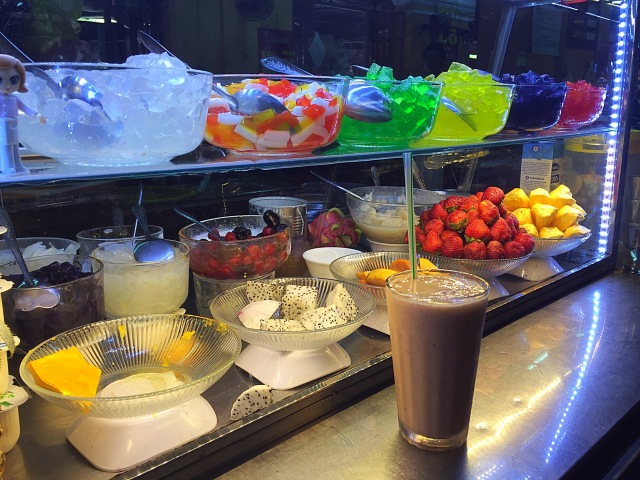 It was then time to say goodbye and head back to winter – just a short visit this time but enough to get my Vietnamese food fix.  Suzy came in on her morning off to wave us goodbye – probably came to make sure the “old man” left : )

This blog was originally set up to share our 9 month adventure around Europe and the USA with friends and family in 2014. On returning to NZ in January 2015 I decided to carry it on so I could continue to share any future travel adventures - it has become my electronic travel diary. I hope you enjoy and get inspired to visit some of the wonderful places we have visited.
View all posts by SUNGRL →
This entry was posted in HoiAn, Vietnam and tagged HoiAn ancienttown. Bookmark the permalink.