Fiji with the Fab Four – Fiji

In June the Fab Four headed to Fiji – our only other overseas jaunt had been pre kids (them not me, apart from Steve of course). On that trip we only just made our flight to Noumea due to some over zealous shopping in duty free. We had our names called over the PA system so we sauntered to the departure gate to find it empty : 0. In those days you had to catch the bus out to the plane so they had to send a bus back to get us. Needless to say we were not very popular when we boarded the plane – to be fair we were too busy laughing to be too worried!

This time we were determined to do better : ). I got to the airport in good time as I had stayed in Auckland the night before – Jen and Camilla were travelling up from Hamilton and meeting Sheree in Papakura. They thought they had left in plenty of time but the traffic was diabolical. Meanwhile I am standing in the self checkin area looking like Nigel No Mates calling them every five minutes to see where they are. I then thought I could check us all in online but no I needed their passports. Next move was to check myself in only to find that I was 3 kilograms overweight when I went to the bag drop and it was going to cost me $100! I flagged that idea and decided to wait for the others.

Check in closed at 8am and they got there with five minutes to spare. It was all go though as Camilla was also overweight – she thought the limit was 25kg – unpacking and repacking commenced! It was all the food and drink supplies putting us over the limit, not the clothes! Due to all my tootooing with trying to check them in the kiosks were now rejecting us! We got in the line which was actually quite long – panic was setting in. I then spotted an unattended staff member and made a bee line for her – thankfully she calmly checked us in reversing all the mess ups I had made!

Phew, we were on our way. We cleared customs and did our duty free shopping in the time allocated and made the departure gate to find our fellow travellers still there – bonus! 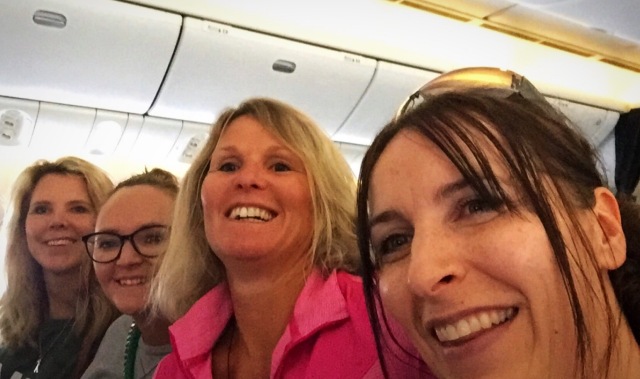 We arrived to 30 degree temperatures in Fiji – bliss after the cold winter we had been enduring in NZ. I had a card from a taxi driver we used last time we were in Fiji and I had arranged for him to pick us up and he didn’t let me down.

We were staying in the Terrace Apartments in Denerau and they upgraded us to a three bedroom apartment. They were a bit tired but very functional with a large kitchen, dining and lounge area and a great big deck overlooking the pool and golf course. What more could four fabulous girls want?

We hit the pool straight away. It was so nice being back in the warmth with minimal clothing on : )

It wasn’t long before the cocktails were calling us at the Port so off we went to Hard Rock Cafe.

Our daily routine started with a 6km jaunt along the beach and through all the resorts on Denarau. Sheree then had us doing interval sprints, well when I say ‘us’ I really mean me – Camilla couldn’t be arsed and Jen participated half heartedly for a few before sauntering off with Camilla. This only lasted a couple of days until Sheree tweaked her calf muscle.

We had decided to do a trip out to Cloud 9 which is a floating party pontoon out in the ocean. I had been to a 40th there before so I knew how cool it was. I went over to the Port to book it and ended up booking us our own private charter! It actually worked out cheaper and we were able to add in some sightseeing and snorkelling too.

We went over to the Port just before 9am on the Friday to meet our skipper Toby. He was wearing a Chiefs jersey so we knew we were in good hands – we all hail from the Waikato after all.

Toby took us out to the surf reef first up – people were surfing in the middle of the ocean – very cool.

Next stop, Cloud 9. We got there just after 10am and found some chairs. We were only going to be there for a couple of hours so we thought we better get into the beers, cider and pizza. We all jumped off the top of the pontoon and had a swim in the sea – the colour of the water is amazing. It was so much fun and we probably could have stayed there all day. 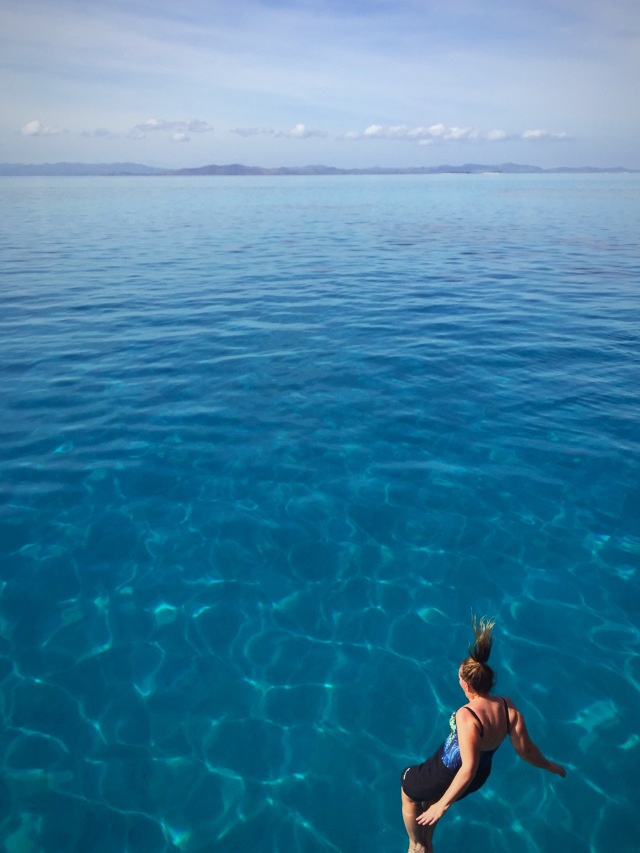 Toby turned up again at 12.30pm – he had been off fishing and sleeping – two things the Fijians excel at : ) 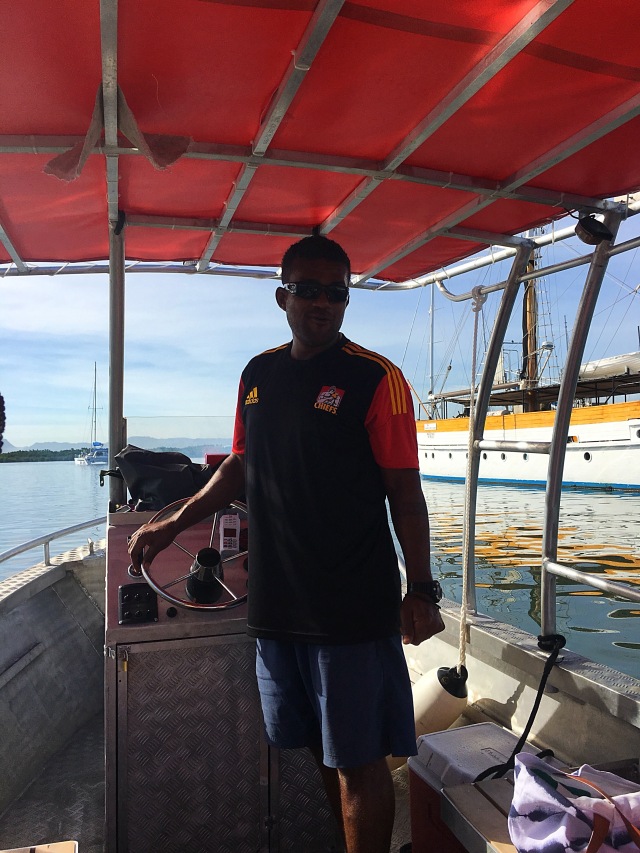 All on board and we were off on a tour of the island resorts.  I have been to Fiji many times and have heard of the various resorts but it was actually cool to see them all and their relativity to each other.  There were a few I hadn’t heard of too as well as some under construction.

Toby chose a snorkelling spot just out from Castaway Island – there was a good reef there and we saw lots of fish.  Camilla and I spent a bit of time out there while the other two had a brief look and then proceeded to lie on the floating pontoon and catch a few rays.  Speaking of rays, just as I was about to head back to the boat I spotted two stingrays  cruising beneath me – very cool.

We then headed back to the Port – the wind had got up and the sea was quite choppy so it was a bumpy ride back in.  Such a great day and I would highly recommend checking out a private charter if you have a group of people – it works out cheaper and you can be flexible with what you want to do.

More cocktails down at the Port were in order that evening – we had discovered FJ10 frozen margaritas at Cardos and thought it was between certain hours in the afternoon but alas no, it was all day long – result : )

The Port was also the scene of the selfie queens (Camilla and Sheree) perfecting their pouts.  It was fair to say that Jen and I were rather inept at this form of art : )  Add a cocktail or two to the selfie queens and boom 💥 they really come out to play. 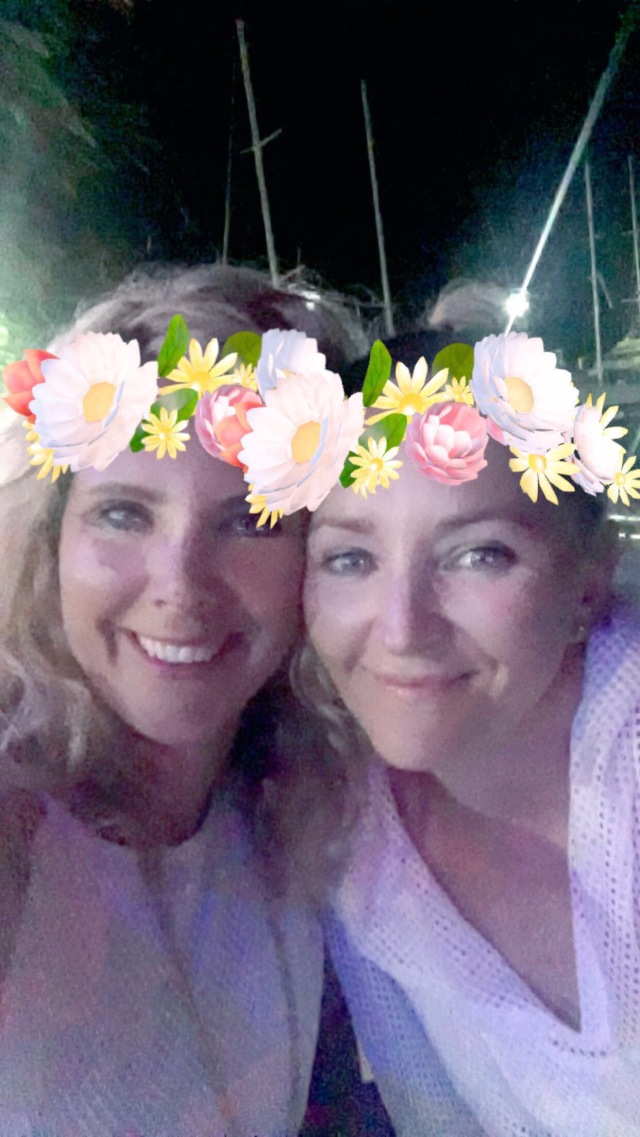 I had taken Jessica my Jersey cow for a tropical sojourn because a. She was freezing in NZ and b. Sheree hates her!  There is a bit of history behind this hate relationship and I love the reaction I get when I present her on these Fab Four get togethers : )

On our last full day in Denerau we hired some electric bikes and did a bit of a ticky tour around – to be honest you can’t go too far but it was fun.  The cost to hire the electric bikes was FJ9 or NZD7 per hour – that is so cheap.  OK they weren’t the flashiest bikes but they went alright.  We had a blast cruising around and ducking into gated communities with a smile and a wave to the security guards – just act like you belong there and they don’t seem to mind.  Fake it till you make it as the saying goes.  We did a bit of off road and ended up at the back of the golf course next to the sea. 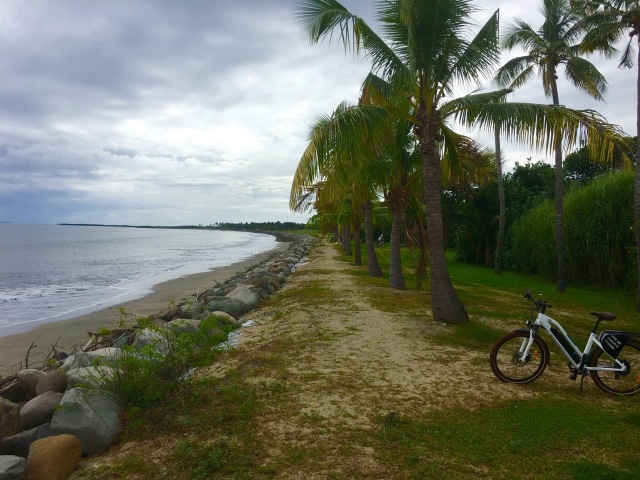 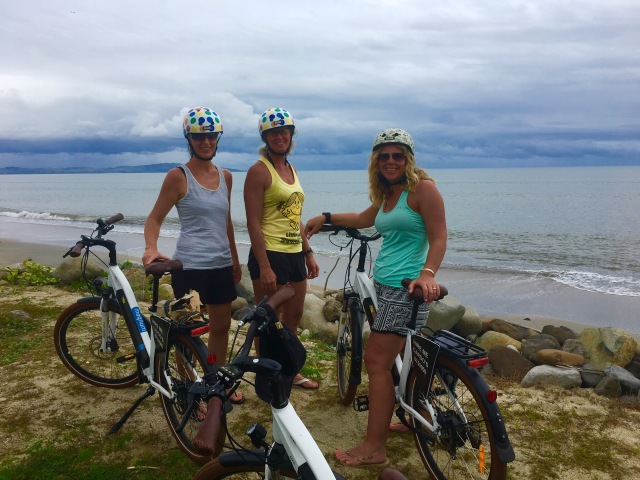 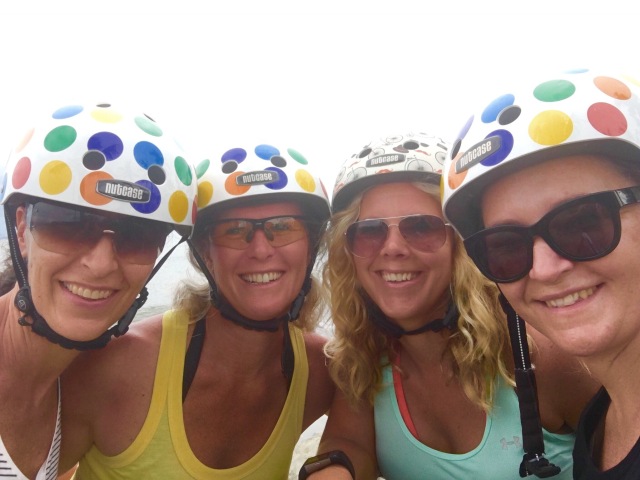 That afternoon Sheree and I had a pamper session booked – we went offsite to the Beauty Spot on the edge of Denerau.  It was interesting!  Sheree’s therapist had a cold or something and was actually quite unwell so Sheree asked her to stop for fear of catching what she had.  They replaced her with another therapist so all’s well that end’s well.  She even went back the next morning and got a new hairdo. 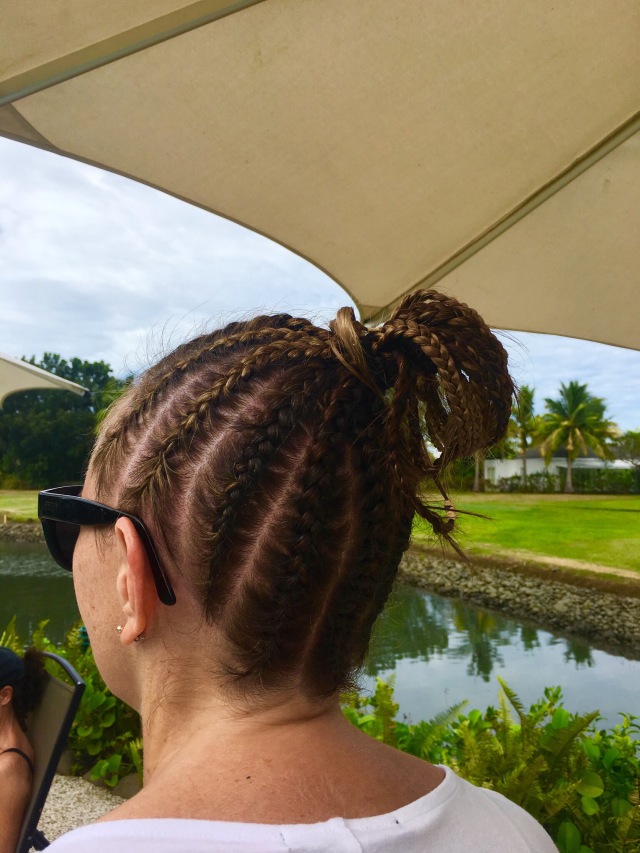 After five nights it was time to head back to NZ and the reality that winter was still alive and kicking as were the husbands and kids and there constant demands.  The real mum’s amongst us had a blissful time being able to do what they wanted, when they wanted without a constant demand on their time.  We shared many laughs and re lived old memories while creating new ones.  Where to next Fabs? 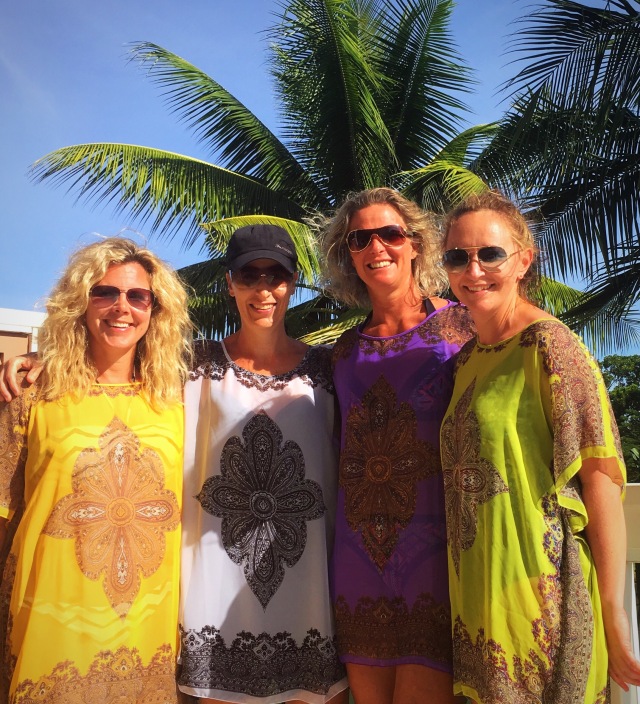 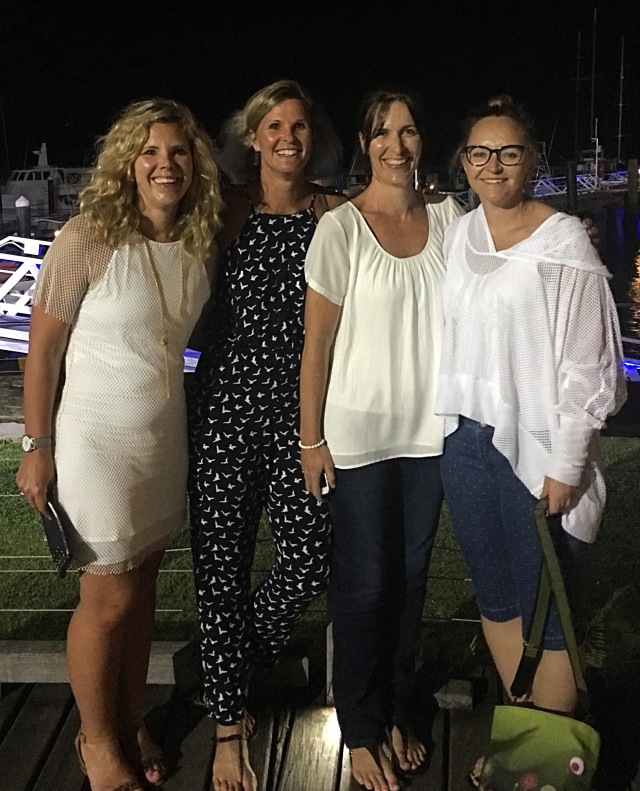 This blog was originally set up to share our 9 month adventure around Europe and the USA with friends and family in 2014. On returning to NZ in January 2015 I decided to carry it on so I could continue to share any future travel adventures - it has become my electronic travel diary. I hope you enjoy and get inspired to visit some of the wonderful places we have visited.
View all posts by SUNGRL →
This entry was posted in Fiji. Bookmark the permalink.