On Tuesday the 2nd August we left Medicine Hat after a wonderful week of good company, good food, wine, golf and many laughs.  Gary & Anita were kindly driving us across the border into Great Falls, Montana where we picked up a rental car to continue our trip in the US of A.

We travelled through more prairie land and saw many crops – wheat, flaxseed, canola, barley and lentils.  There are just thousands of acres planted out in these crops.  The harvest will start in the next two to three weeks so the crops were looking particularly good.

We were travelling along at quite a good speed when eagle eye Gary spotted a rattle snake sunning itself on the side of the road. We pulled over and went back to get a closer look – Steve and I had never seen one before. To be honest Steve couldn’t have cared less if he never saw one so kept quite a distance away! I of course wanted to get a photo. Kamikaze Gary wanted to get the snake to rattle so used Steve’s 5 iron to provoke it much to Steve’s disgust! I must say I was a bit nervous but apparently they only strike you if they are coiled and this one wasn’t. He was just annoyed that someone was poking him with a 5 iron!  Photo obtained we moved on. 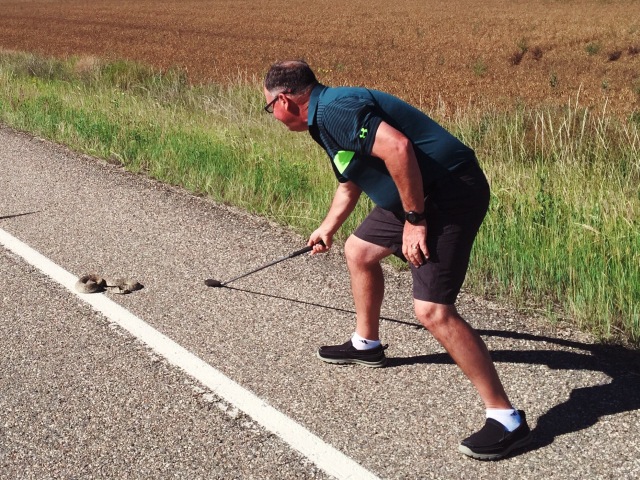 We were going to cross the border at Coutts on the Canadian side and Sweetgrass on the US side.  Gary & Anita said that the US customs officials could be a bit tough here so we made sure we had everything in order.  You are not allowed to take any meat, fruit or unprocessed food across the border so we duly ate the apples and sandwiches we had made before crossing the border.

You drive up to the booth and hand your passports over.  We knew we would have to step inside given we were from NZ and sure enough we were told to pull into the carpark and go inside.  We all went and sat inside and waited to be called.  The lady that questioned us was very pleasant and all we had to do was supply an address in the US where we would be staying.  We then had to pay USD6 each for our Visa Waivers and we were on our way.  I got all the passports, paperwork and my credit card back from her and off we went.  That was fairly painless. 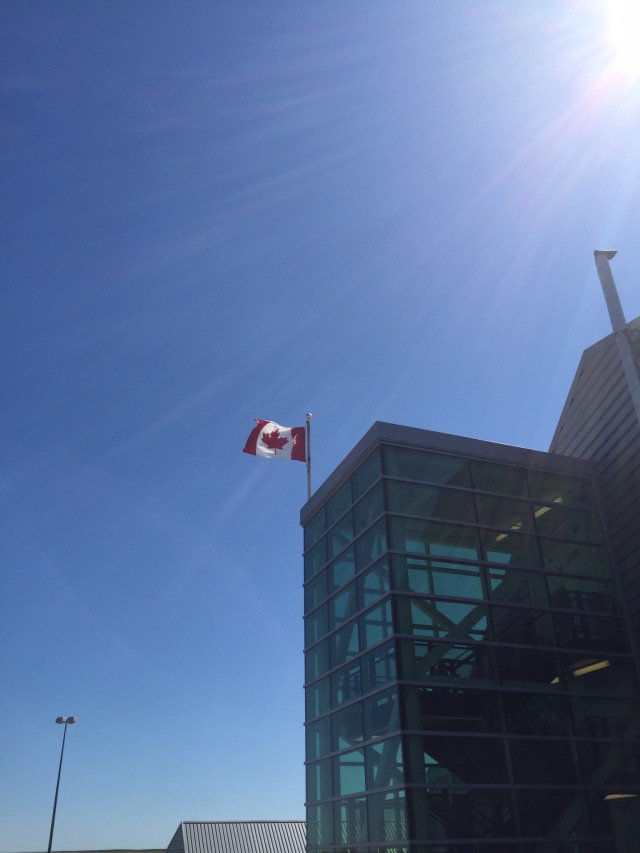 Last glimpse of the Canadian flag before crossing into the US.

A few minutes down the road I had this sudden thought that I hadn’t put my credit card away – I knew she had handed it back to me and when I had hopped in the car I had handed the passports and paperwork to Steve to put away.  We pulled over on the side of the highway and searched the car – no credit card!  The only thing I could think was that when we were wandering back through the carpark I had dropped it – I was so excited that it all went smoothly and was busy explaining that we had until the 30th October to leave the US that I was probably waving my hands around as I do!

What to do?  It wasn’t that simple to go back as that would mean crossing the border back into Canada and then re entering the US.  Not to mention we were on a tight schedule – we had a tee time booked!  I tried phoning the credit card company but it wouldn’t go through.  Anita looked up the phone number for the border crossing and Gary phoned them.  Hallelujah the card had been found in the carpark and handed in.  Gary asked if they could possibly courier it to Great Falls were we were staying the night – due to them being in the middle of nowhere the courier services are not too frequent!  We got put through to the supervisor and it turned out he was travelling to Great Falls the next morning and would bring it through with him.  It also turned out that he was married to a Kiwi girl from Wellsford, north of Auckland.

The world really does have some good people in it and perhaps some of those good deeds we have done in the past gave us a little bit of good karma : )

Relieved, we carried on with our plans.  What a noggin I was!

We arrived into Great Falls about 2pm and went straight out to Meadow Lark Golf Club.  After golf we had a drink and some appetisers in the club house.  It was a hot day so we found a nice shady spot to watch the golfers on the 18th green.

We checked into our hotel and met in the bar for a drink.  We got chatting to the waitress who made a couple of bar and dinner suggestions for us.  She also showed us a picture of her three year old daughter and told us that she was a You Tube sensation singing Adelle’s Hello with a cardboard guitar.  The clip has had over a million views.  If you want to see it type in Adelle Kimber Hello to your browser.  This is the You Tube Link  https://youtu.be/HpKaPlU9Wkk.  So, so cute!

Anyway we went into Great Falls and checked out Sip n Dip, a bar she had recomended.  We were unsure what to expect.  It turned out they have a swimming pool in the wall behind the bar and there were two guys swimming around in there with mermaid tails on : 0. It was ladies night.  We got seats right up at the bar so we could check it out – it was amusing to start with but then we found it a bit weird.  These guys would swim around then stop to wave at us.  A girl joined them later in the evening.  We ended up having a late dinner there and in true American fashion the portions were huge!  Steve got a full rack of ribs and declared them some of the best ribs he had ever eaten. 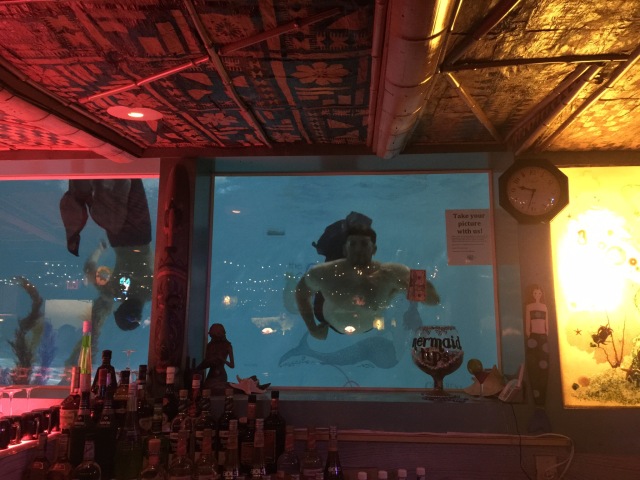 After dinner it was back to the hotel. I had to go on a mission the next morning to get a bottle of champagne for our US customs friend who was dropping my credit card off at 9am. I google mapped the supermarket and it said there was one 950 metres away. Perfect. What I didn’t see was that the 950 metres was the direct route – I had to take a much longer route due to the railway line and highway. I got back with 20 minutes to spare. He arrived at 9am on the dot and it was service with a smile – what a nice guy : )

It was then time to say goodbye to Steve’s brother from another mother, Gary and his lovely wife Anita.  We had such a blast with them and look forward to catching up in NZ at some stage in the not too distant future we hope : )

Great Falls is a city in and the county seat of Cascade County, Montana, United States.  The 2015 census estimate put the population at 59,638.

Great Falls takes its name from the series of five waterfalls in close proximity along the upper Missouri River basin that the Lewis and Clark Expedition had to portage around over a ten-mile stretch; the effort required 31 days of arduous labor during the westward leg of their 1805-06 exploration of the Louisiana Purchase and to the Pacific Northwest Coast of the Oregon Country. Each falls sports a hydroelectric dam today, hence Great Falls is nicknamed “the Electric City”.