The District of Columbia was created to serve as the permanent national capital in 1790. Within the District, a new capital city was founded in 1791 to the east of a preexisting settlement at Georgetown. The original street layout in the new City of Washington was designed by Pierre (Peter) Charles L’Enfant.

It is set up in a grid like fashion with diagonal streets creating diamond shapes. The letter named streets run east to west and the numbered streets run north to south. The avenues are named after every State in the USA apart from California and Ohio – these are streets in the city. There are a lot of parks in the city and they say that 90% of Washingtonians can walk out their front doors and be in a park within 10 minutes.

Important to note, there is no J Street in any quadrant. This is because, until the mid-nineteenth century, the letters “I” and “J” were indistinguishable when written. Urban legend had said that J Street was omitted deliberately by L’Enfant due to a dispute with John Jay, the first Chief Justice of the United States Supreme Court; however, this was later proven to be a myth.

K Street is where all the notable law firms and lobbyists are. Apparently being referred to as a K Road lawyer is not a compliment.

After seeing images of some of the buildings in Washington D.C. on TV in the news and on TV programs it was cool to see some of them in the flesh.

The White House is the official residence and principal workplace of the President of the United States, located at 1,600 Pennsylvania Avenue NW in Washington, D.C. It has been the residence of every U.S. president since John Adams in 1800.

The Executive Residence is made up of six stories—the Ground Floor, State Floor, Second Floor, and Third Floor, as well as a two-story basement. The term White House is often used as a metonym for the Executive Office of the President of the United States and for the president’s administration and advisers in general, as in “The White House has decided that….”. The property is a National Heritage Site owned by the National Park Service and is part of the President’s Park. In 2007, it was ranked second on the American Institute of Architects list of “America’s Favorite Architecture”.

The United States Capitol, atop Capitol Hill at the eastern end of the National Mall in Washington, D.C., is the seat of the United States Congress, the legislative branch of the U.S. federal government, completed in the year 1800. Though not at the geographic center of the Federal District, the Capitol is the origin point at which the District’s four quadrants meet, and around which the city was laid out.

The Capitol hosts the presidential inauguration every four years. The Capitol Hill grounds consist of 274 acres.

The primary role of the US Supreme Court is interpreting the Constitution. In summary this includes settling disputes between States, hear appeals from State & Federal Courts and determine the constitutionality of federal laws.

The inscription on the buildings says “Equal Justice Under Law” 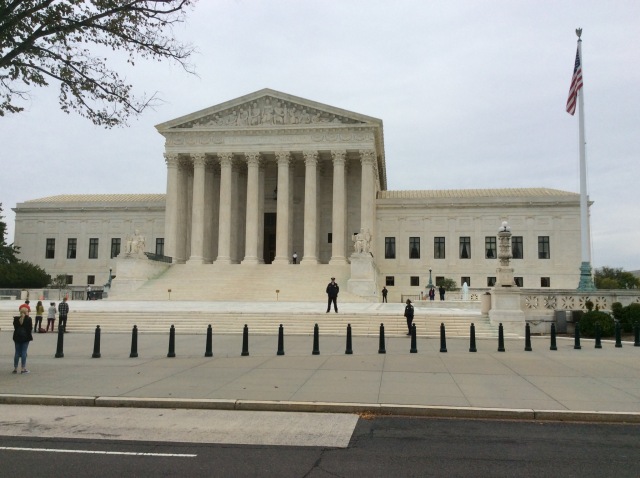 The Library of Congress is physically housed in three buildings on Capitol Hill and a conservation center in rural Virginia. The Library’s Capitol Hill buildings are all connected by underground passageways, so that a library user need pass through security only once in a single visit.

The picture below is the Thomas Jefferson Building and is the main library building. The other two buildings are the John Adams Building and the James Madison Memorial Building.

The Treasury Building was built between 1836 and 1869 and sits next door to The White House.

The Cathedral Church of Saint Peter and Saint Paul in the City and Diocese of Washington, operated under the more familiar name of Washington National Cathedral, is a cathedral of the Episcopal Church it is the sixth-largest cathedral in the world, the second-largest in the United States, and the highest as well as the fourth-tallest structure in Washington, D.C.

The Protestant Episcopal Cathedral Foundation, under the first seven Bishops of Washington, erected the cathedral under a charter passed by the United States Congress on January 6, 1893. Construction began on September 29, 1907, when the foundation stone was laid in the presence of President Theodore Roosevelt and a crowd of more than 20,000, and ended 83 years later when the “final finial” was placed in the presence of President George H. W. Bush in 1990. Congress has designated the Washington National Cathedral as the “National House of Prayer”.

It was declared a National Historic Landmark in 1965.

We took a ride down Embassy Row. Embassy Row is the informal name for the section of Massachusetts Avenue, N.W. between Scott Circle and the North side of the United States Naval Observatory, in which embassies, diplomatic missions, and other diplomatic representations are concentrated. Washington, DC boasts more than 175 foreign embassies, residences, chanceries, and diplomatic missions. An embassy is the official mission through which one country conducts their foreign affairs in another country.

We also took a drive through Georgetown. Georgetown is a historic neighborhood, commercial, and entertainment district located in northwest Washington, D.C., situated along the Potomac River. Founded in 1751 in the state of Maryland, the port of Georgetown predated the establishment of the federal district and the City of Washington by 40 years. It is an expensive neighbourhood to live in. It is also the home of the George Washington University.

The land rates used to be levied on the road frontage of your property so we saw some pretty narrow houses one of which was only 2.8 metres wide. They also have preservation laws in place to ensure Georgetown maintains it’s historic feel – there is a saying “what you see will always be”.

This blog was originally set up to share our 9 month adventure around Europe and the USA with friends and family in 2014. On returning to NZ in January 2015 I decided to carry it on so I could continue to share any future travel adventures - it has become my electronic travel diary. I hope you enjoy and get inspired to visit some of the wonderful places we have visited.
View all posts by SUNGRL →
This entry was posted in District of Columbia, USA. Bookmark the permalink.