Thursday was another perfect summer’s day. We started the day with a run and then a swim in the lake. The lake temperature is about 22 degrees and it is perfect for cooling off and doing a bit of swimming (Team RV’s note – pre training for the Wanaka Tri next year).

Beth and Shaun who we had dinner with in the Jura called in for coffee on their way to the Ticino so that was nice to see them again.

Next on the agenda was a cycle in the Engelberg Valley. We drove to Stans and caught the train up to Engelberg. This is where the golf course is and the day we came up to see that it was very cloudy so it was great to see it in all it’s glory. Mt Titlis looked majestic. We hired our bikes from the local tourist office and did a tour of Engelberg. Next stop was Co-op which is one of the main supermarket chains. We stocked up on supplies with the main item being Swiss sausages. You can also buy little bundles of wood but Elvis was adamant we would find all we needed along the way. Steve enquired whether we had matches which we did not so “good thinking Steve” – we acquired a lighter.

The first part of the trip down the valley is on the road – it is like a chicane and you can certainly pick up good speed. The lady at the tourist office had said you follow the road down until you get to the end of the chicane and you will then see the cycle track. The boys had gone ahead and then Karin & I had got to what we thought was the end of the chicane and saw a little bicycle sign. We pulled over thinking that the boys had overshot the mark. I just saw Steve disappearing around the corner down this steep hill and thought oh no he is going to have to come all the way back up. Anyone that has cycled with Steve knows about his love affair with a) biking and b) going up hill!

On closer inspection the sign actually said you couldn’t cycle on this particular track so we carried on down the valley a bit further and there were the boys waiting at the start of the cycle track. The track was quite bumpy to start with and although the bikes were good they weren’t quite like my Natural High 29er! Not far in we came across a perfect picnic spot overlooking the river and a waterfall. There were two planks that would make great seats.

We set about gathering big stones and wood under the direction of little Lucifer aka Elvis. Karin went off to find a suitable tree where she would acquire our skewers. Armed with her Swiss Army knife four sausage holding skewers were produced. Meanwhile Little Lucifer had got the fire going and it was smoking along very nicely. We had to wait for the smoke to subside and the heat in the embers to come through before we could put the sausages on.

The sausages came out great and were delicious as always – a slightly different taste to the ones cooked on a BBQ. Elvis had remembered the Thomy mustard so all was well with the world.

After dousing the fire (with water not the apparent traditional method of pee) we tidied up and set off on our bikes again. About a hundred metres down the track we discovered a BBQ area with a little shed full of wood. Way too easy – our hunting and foraging was much more fun.

The ride along the river was fantastic – surrounded by mountains and farms it is just so picturesque. As we got down the valley we came across a clearing where the para gliders were landing so we stopped to watch them come down. They then pack up their shutes, load them on their backs and catch the gondola back up the mountain. One of the guys stopped to chat and told us that a german guy had crash landed in the trees up above so the rescue helicopter was coming to get him.

We cycled on and saw the helicopter coming in – it landed just off the track and then headed back up. We saw it hovering above a part of the forest and winching something down. It then started coming back down and we could see someone hanging from the winch.

We also came across quite a few haymakers and I saw the hay nets coming down the lines – I am still fascinated by this process.

We stopped by the river once we had made it back to the little villages at the bottom of the valley so we could cool down. The boys went off and got drinks and ice creams and we put our feet in the water. The water was quite fast flowing and chilly. Elvis and I stood in the river for a little while – we called it our ice challenge.

We took the bikes back to the drop off point in Stansstad where you had to put them in an old railway carriage. They had given us the lock combination when we picked the bikes up so we unlocked it and put our bikes in. We then caught the train back to Stans where we had left the car.

We all hit the pool when we got home – it was still really hot. We had a game of Boule (Pétanque) on the stones next to the pool – Steve didn’t want to get out of the pool to play so played from the pool. The Kiwis had a victory over the Swiss : ) 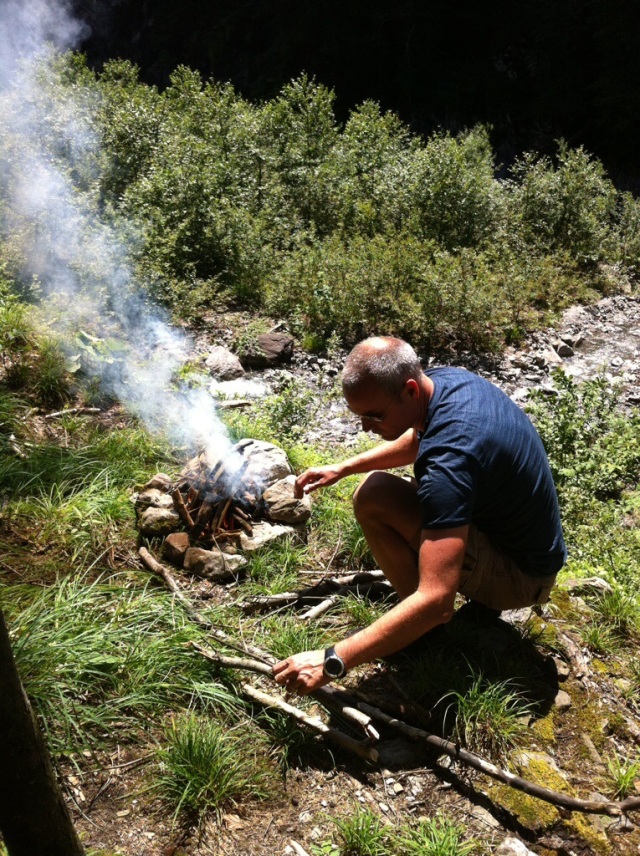 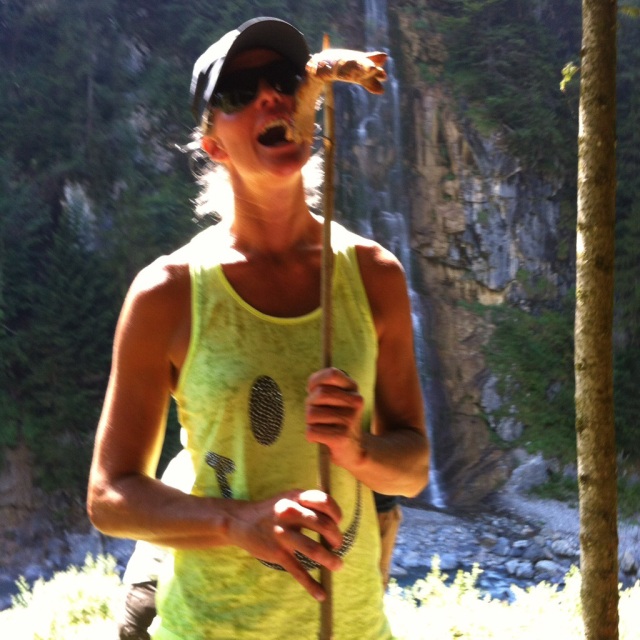 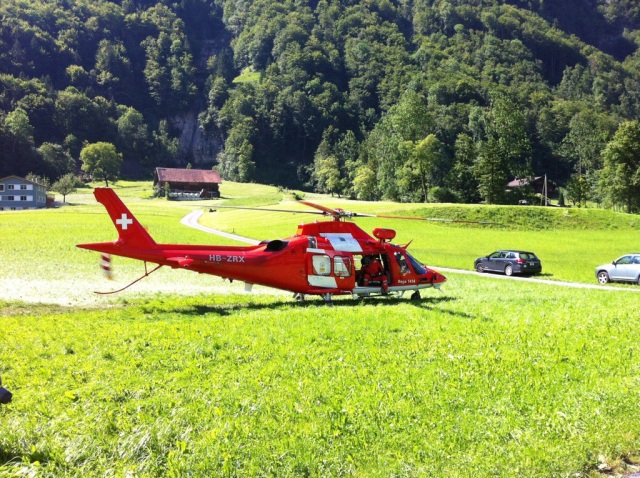 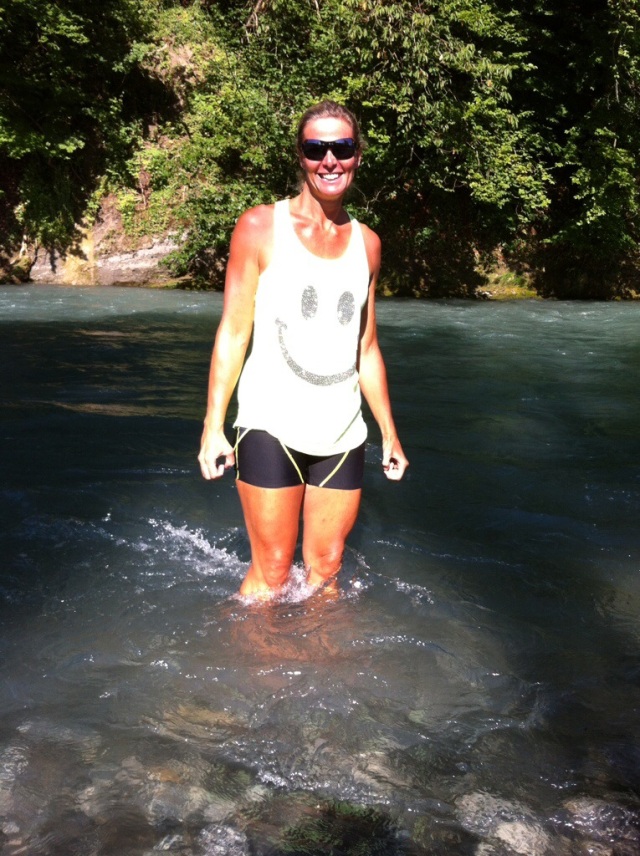 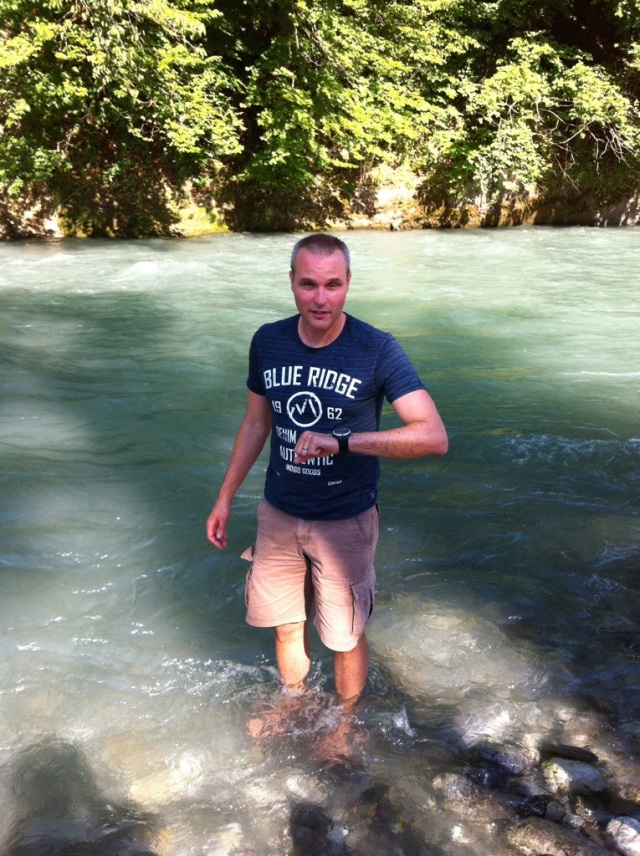