Another beautiful day greeted us as we docked in Kusadasi, Turkey. Kusadasi is the gateway to the extraordinary ruins of Ephesus. We had been to Ephesus previously so chose to stay onboard and enjoy the comforts of one of the cabanas for the day – it was Sunday after all – the day of rest!

Visitors from all over the world come to Kusadasi to lay eyes on Ephesus, one of the most fascinating archeological sites accessible to the modern traveler. An Ancient Greek city, then a major Roman provincial capital, by the 2nd century the population had swelled to over 300,000 inhabitants. Ephesus was a significant sea port and responsible for opening multiple trade opportunities with the Middle East.

Kusadasi is situated on the west coast of Turkey, 90km south of Izmir. It has a population of about 65,000 and enjoys a mediterranean climate with over 300 sunshine days per annum.

Not far from where the boat docked is the bazaar where you can buy lots of different local products including Turkish carpets. Carpet weaving has been one of Turkey’s most treasured arts far beyond it’s recorded history. Looking for a husband? Try carpet weaving! Historically, a Turkish daughter had a better chance of marrying if she was a skilled weaver. Her carpets were offered as part of the dowry to her future husband. There you go my single friends – take up carpet weaving : )

Haggling is a way of life here, and throughout Turkey, bargaining is expected. As a general rule of thumb, start at about 60% of the asking price and be prepared to pay about 75%. Steve & Carol went ashore today and experienced some haggling – Steve decided it definitely wasn’t his cup of tea! Carol made a few purchases though. 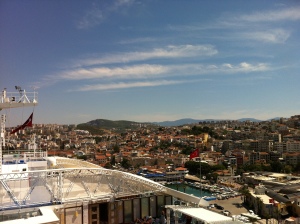 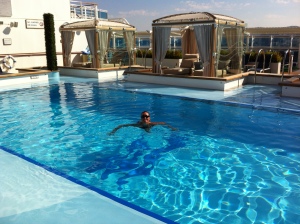 This blog was originally set up to share our 9 month adventure around Europe and the USA with friends and family in 2014. On returning to NZ in January 2015 I decided to carry it on so I could continue to share any future travel adventures - it has become my electronic travel diary. I hope you enjoy and get inspired to visit some of the wonderful places we have visited.
View all posts by SUNGRL →
This entry was posted in Princess Cruises. Bookmark the permalink.