Back in May we were fortunate enough to be given free tickets to visit Hobbiton.  Hobbiton is located just outside Matamata in the Waikato region of New Zealand and has been nicknamed Hobbiton.  It was originally used to film parts of the Lord of the Rings trilogy where temporary hobbit holes were built creating The Shire.

Filming of both the Lord of the Rings trilogy and the Hobbit trilogy happened in a number of locations around New Zealand, namely:

I personally haven’t watched any of the movies but I had heard such great things about Hobbiton that it was too good an opportunity to pass up.  It was a crisp winter’s day – minus 1 with a frost covering the ground.  By the time our tour started the sun had melted the frost – it was the perfect winter’s day with not a cloud in the sky : )

Our tour guide was Scottish and she had moved to New Zealand specifically to work as a tour guide at Hobbiton such was her obsession with the Lord of the Rings and Hobbit trilogies.  She had applied for the job online, had an interview on Skype and was winging her way to NZ within a couple of weeks.  She said it is her dream job and she is absolutely loving it and you could tell – she was so passionate.

She told us that over the summer months it is so busy she can do up to six tours a day.  The guides are also responsible for keeping the Hobbit holes clean so every morning they clean the inside and outside of the windows and dust the props you can see in the windows.  Although the hobbit holes are now all permanent structures there is only one that you can actually go into.  The others are too small.

Hobbiton has four permanent gardeners who take care of the gardens in the Shire’s rest and grow various vegetables.  Apparently they are quite competitive so they are always having competitions as to who can grow the biggest of something.

The Hobbiton Movie Set is the only set that remains intact from the trilogies, and that allows visitors to fully immerse themselves in the wonders of The Shire.

The Hobbit is a film series consisting of three high fantasy adventure films directed by New Zealander Peter Jackson. They are based on the 1937 novel The Hobbit by J. R. R. Tolkien, with large portions of the trilogy inspired by the appendices to The Return of the King, which expand on the story told in The Hobbit, as well as new material and characters written especially for the films. Together they act as a prequel to Jackson’s The Lord of the Rings film trilogy. The films are subtitled An Unexpected Journey (2012), The Desolation of Smaug (2013), and The Battle of the Five Armies (2014).

The screenplay was written by Fran Walsh (Peter Jackson’s wife), Philippa Boyens, Jackson, and Guillermo del Toro, who was originally chosen to direct before his departure from the project. The films take place in the fictional world of Middle-earth sixty years before the beginning of The Lord of the Rings, and follow hobbit Bilbo Baggins (Martin Freeman), who is convinced by the wizard Gandalf the Grey (Ian McKellen) to accompany thirteen dwarves, led by Thorin Oakenshield (Richard Armitage), on a quest to reclaim the Lonely Mountain from the dragon Smaug (voiced by Benedict Cumberbatch). The films also expand upon certain elements from the novel and other source material, such as Gandalf’s investigation at Dol Guldur, and the pursuit of Azog and Bolg, who seek vengeance against Thorin and his ancestors.

The first film in the series premiered at the Embassy Theatre in Wellington, New Zealand on 28 November 2012. One hundred thousand people lined the red carpet on Courtenay Place, and the entire event was broadcast live on television in New Zealand and streamed over the Internet. The second film of the series premiered at the Dolby Theatre in Los Angeles, California on 2 December 2013. The third and final film premiered at Leicester Square in London on 1 December 2014.

The series was a major financial success, with the films classified as one of the highest-grossing film series of all time, going on to outgross The Lord of the Rings film trilogy. Although critically considered to be inferior to The Lord of the Rings, it was nominated for various awards and won several, though not as many as its predecessor.

How Hobbiton came to be…….

In 1998, Sir Peter Jackson’s team of location scouts were searching for the iconic rolling hills and lush green pastures of Hobbiton™. An aerial search led them to the Alexander farm, a stunning 1,250 acre sheep farm in the heart of the Waikato. They noted the area’s striking similarity to The Shire™, as described by JRR Tolkien, and quickly realised that the Hobbits™ had found a home.

In one particular part of the farm, a magnificent pine tree towered over a nearby lake, adjacent to a rising hill. Bag End now sits atop that hill, overlooking the Party Tree, as that pine would later be known. The surrounding areas were untouched; no power lines, no buildings and no roads in sight. This meant that Sir Peter Jackson could leave the 20th century behind, and fully submerge himself in the fantasy world of Middle-earth™.

In March 1999 the crew began the nine month quest to bring the ideas for Hobbiton to fruition; help was provided by the New Zealand Army, and soon 39 temporary Hobbit Holes™ were scattered across the 12 acre plot used for the set. Secrecy was key, and strict security measures were put in place by the production company throughout construction and filming. Filming commenced in December 1999, and it took around three months to get a wrap on The Shire.

After an initial attempt at demolition, 17 bare plywood facades remained. These shells would serve as the catalyst that propelled Hobbiton forward into the public eye, with guided tours commencing in 2002.

In 2009, Sir Peter Jackson returned to film The Hobbit trilogy, and he left behind the beautiful movie set you see today; 44 permanently reconstructed Hobbit Holes, in the same fantastic detail seen in the movies. In 2012 The Green Dragon™ Inn was opened as the finale to the journey. Guests now finish their Hobbiton Movie Set experience with a refreshing beverage from the Hobbit™ Southfarthing™ Range. There’s an abundance of movie magic nestled inside the fully operational farm. 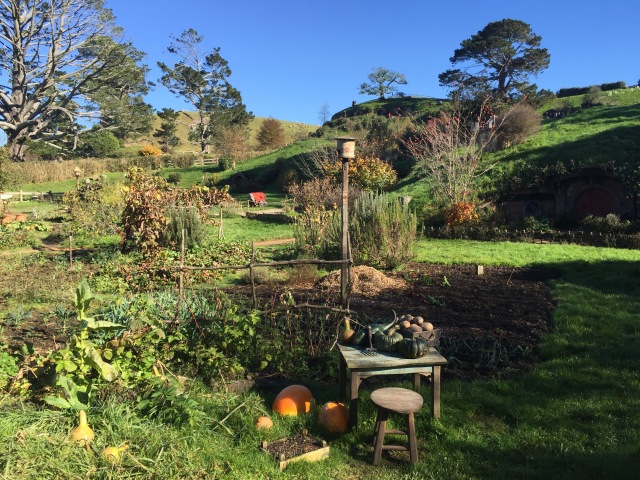 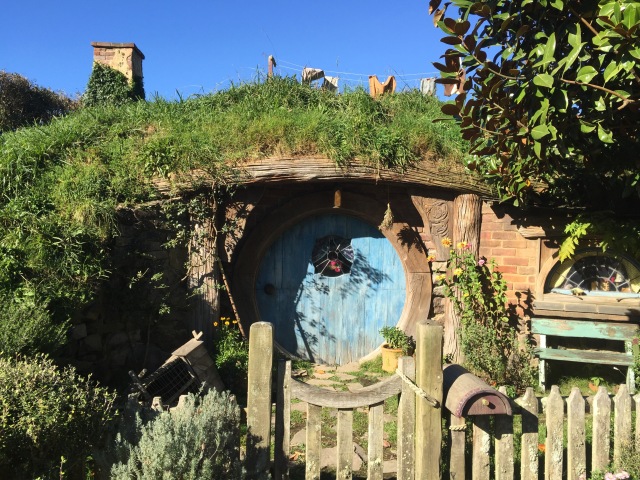 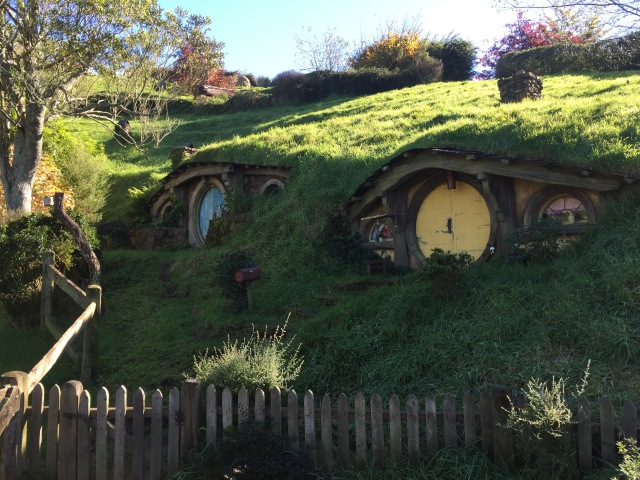 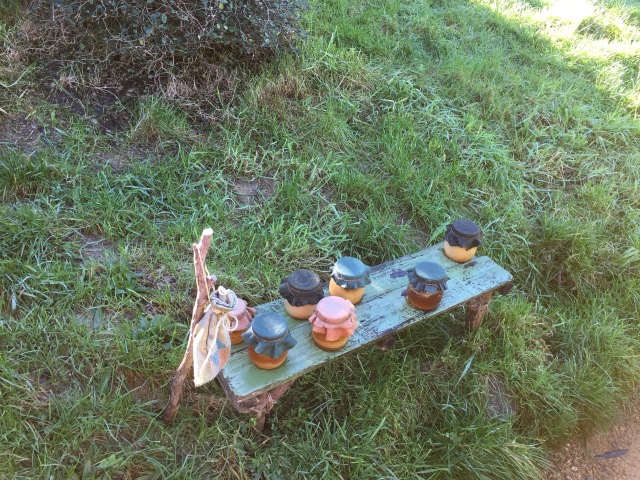 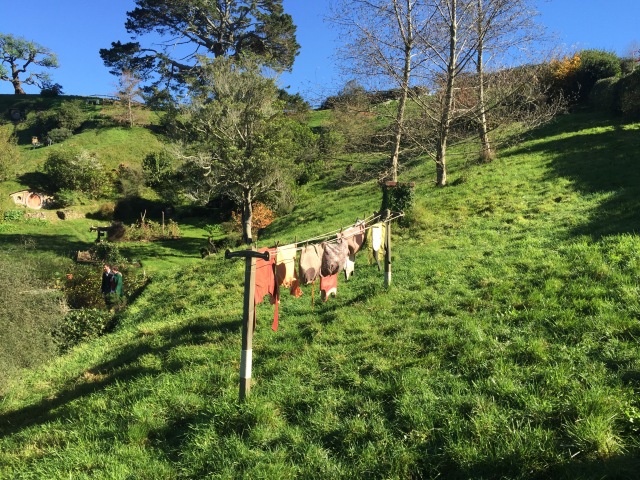 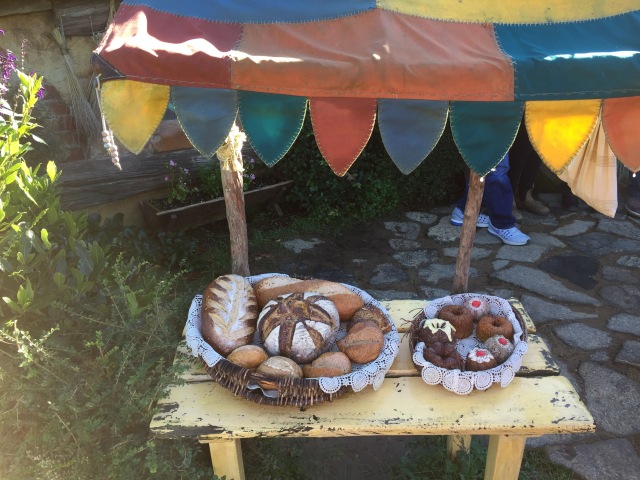 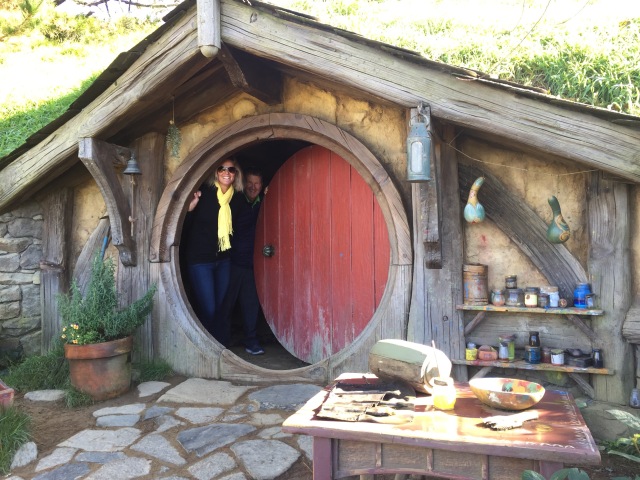 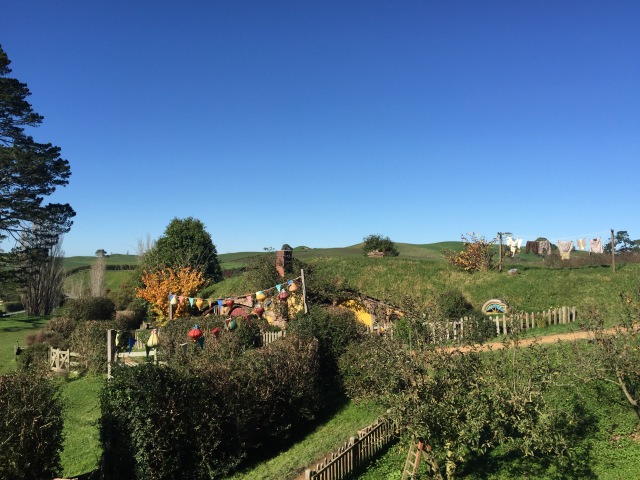 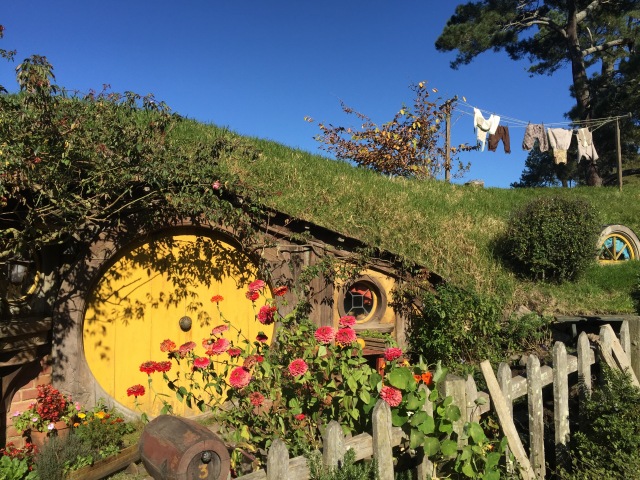 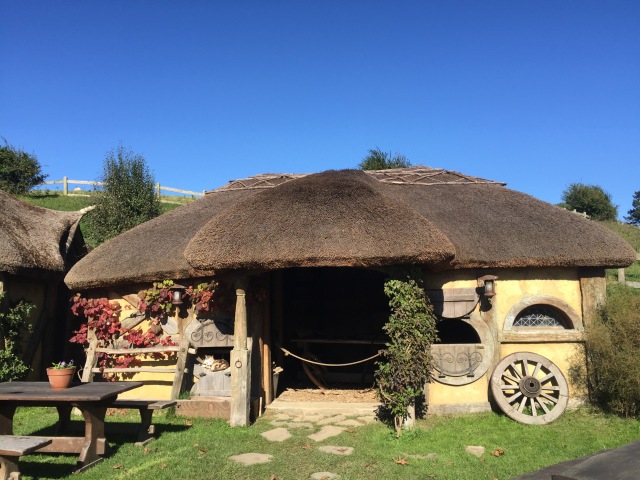 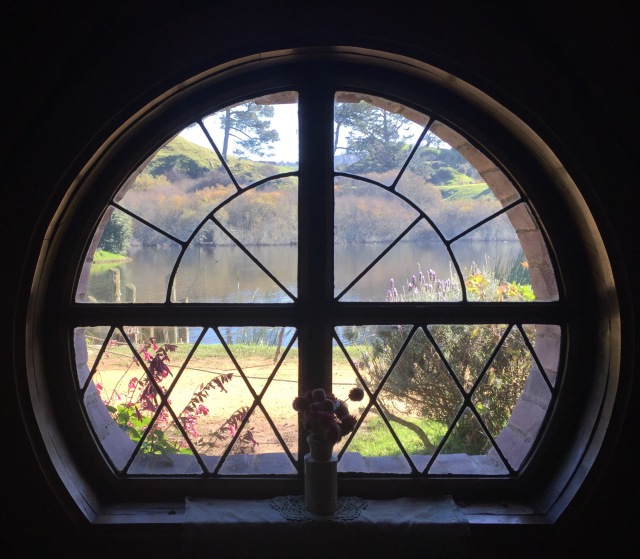 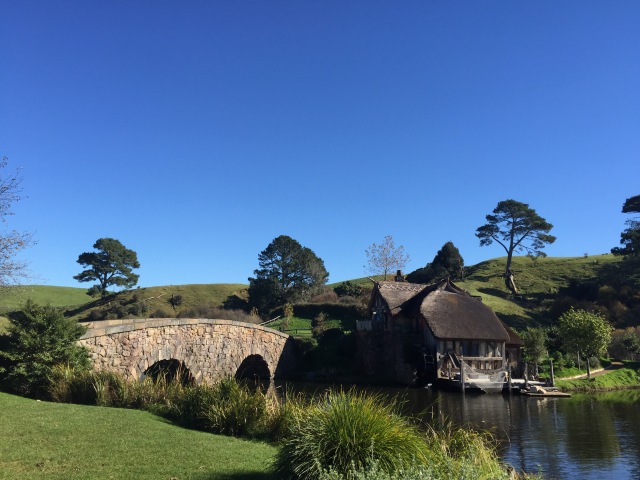 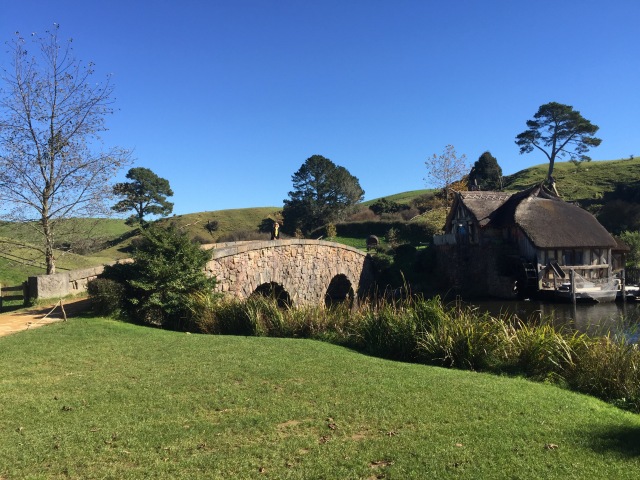 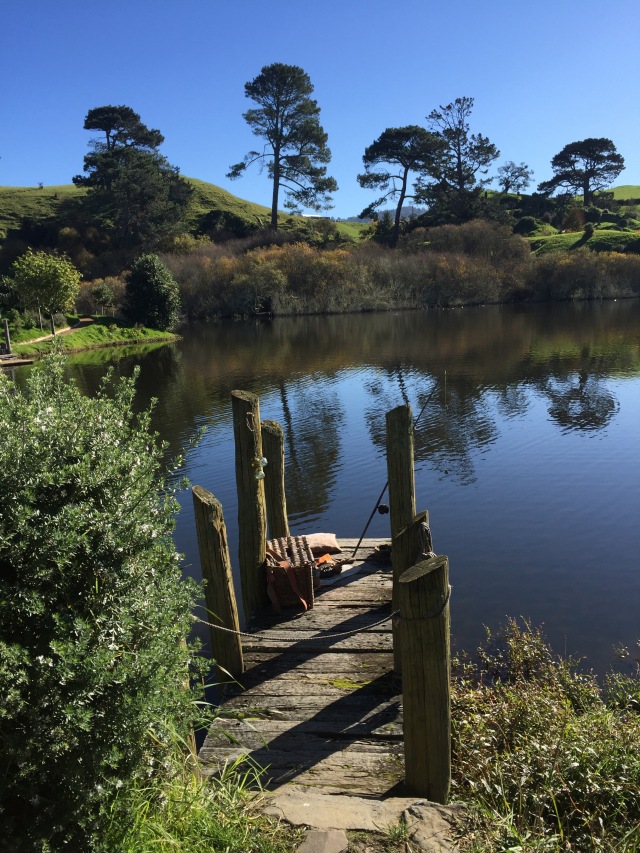 This blog was originally set up to share our 9 month adventure around Europe and the USA with friends and family in 2014. On returning to NZ in January 2015 I decided to carry it on so I could continue to share any future travel adventures - it has become my electronic travel diary. I hope you enjoy and get inspired to visit some of the wonderful places we have visited.
View all posts by SUNGRL →
This entry was posted in New Zealand, Waikato and tagged hobbiton. Bookmark the permalink.