On Sunday I decided to check out the Kettle Valley Railway (KVR) in Myra Canyon.  It took me about an hour to get there with the last 8km being on a forestry road.  It is a popular spot with lots of people up there to go hiking or biking.  I hired a bike and set off – the trail is 12km one way, when you get to the end you turn around and come back.  You cross 18 trestle bridges and go through 2 tunnels.  The ride was easy but the gradient deceiving.  As I started out it appeared I was going downhill – I thought I would have a slight uphill ride coming back.  On my return trip it appeared I was going downhill also.  Apparently the gradient is only 2% so is relatively flat.

I came across a dog that carries his own water pack.  I spoke to the owner and she said “we have to carry our own water, so he does too”.  He was a Husky dog and apparently they enjoy carrying somethings as it makes them feel like they are working.

I found the majority of the scenery quite stark, barren and not particularly attractive.  The forest has been milled up there and the remnants of the 2003 fire remain with a lot of charred trees.  It was good to be out on the bike though.

When I drove back down the forestry road it had obviously rained so it was a bit muddy.  The car got quite dirty so I went in search of a car wash : 0 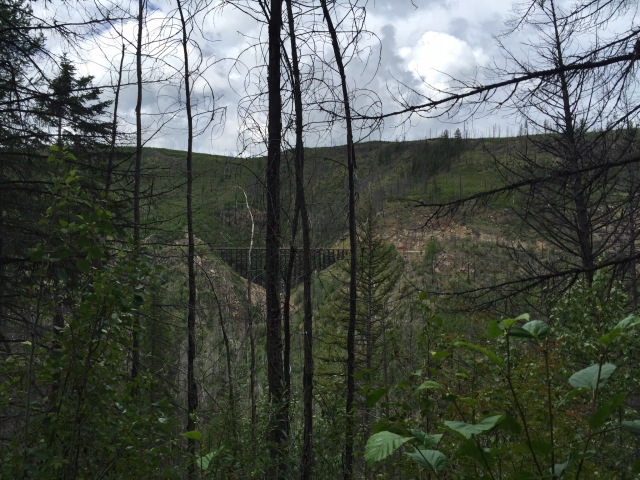 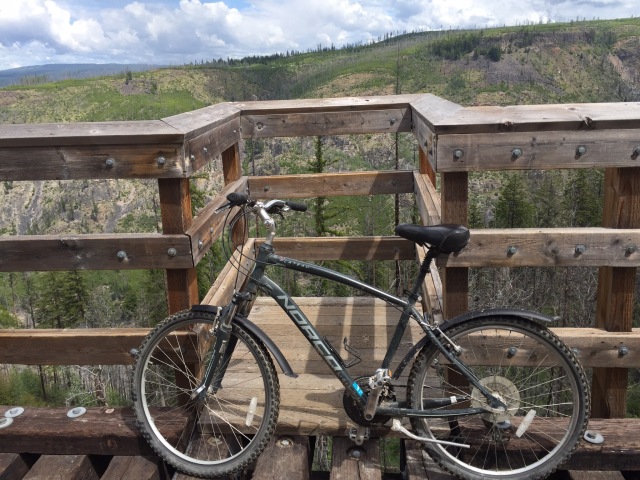 The Kettle Valley Railroad was a subsidiary of the Canadian Pacific Railway that operated in the Thompson-Okanagan region of southern British Columbia.

It opened in 1915 and was abandoned in portions beginning in 1961, with the final segment falling into disuse in 1989.

Much of the railroad’s original route has been converted to a multi-use recreational trail, known as the Kettle Valley Rail Trail, which carries the Trans-Canada Trail through this part of British Columbia.

Freight carried on the KVR consisted primarily of ore from the Kootenay region of British Columbia, as well as forestry products and fruit from the Okanagan. Finished goods were primarily brought into the Southern Interior on trains heading Eastbound. During the Kettle Valley Railway’s lifespan, on numerous occasions it was called upon to act as “The Second Mainline” when washouts, avalanches and rock slides closed off the main CPR line through the Fraser Canyon. CPR recognized the benefit of having a second railway transiting through British Columbia, so in the 1950s, they set off on an upgrade program that saw the weight-bearing strength of the rails increased, as well as bridge and trestle improvements which brought the railway up closer to mainline standards.

One of the most popular sections of the hiking trail along the former Kettle Valley Railway line is the section through Myra Canyon. Myra Canyon is located South of Kelowna on Okanagan Mountain. The section of line originally transited between Midway and Penticton. When the railway was built, the section of railway between Myra station and June Springs station required 18 wooden trestles and two tunnels in order to traverse the deep canyon.

For years after the abandonment of this section of rail line, the area was a noted attraction, with its relatively gentle grade, it became a hiker and cyclist haven. Years of disrepair on the trestles began to take its toll on the line. In some cases vandals had removed railway ties on the larger steel bridges, thus creating large gaps. In some cases hikers and cyclists wanting to cross the trestles would be required to walk on sections of steel no wider than a foot across in sections where the ties were removed. This would not normally be an issue, but many of these trestles and bridges were hundreds of feet in height. However after a fatal accident involving a cyclist on one of the trestles, many people petitioned to have the bridges and trestles made safer. These upgrades included repairs after numerous years of disrepair, and the installation of handrails and planks so that people did not have to jump between each railway tie.

This section of the railway was designated a National Historic Site of Canada in 2002.

From August to September 2003, lightning sparked the 2003 Okanagan Mountain Park Fire in Okanagan Mountain Provincial Park. This fire rapidly grew in strength and size and made its way Southeast across Okanagan Mountain. This fire engulfed many portions of the KVR between Penticton and McCulloch Lake. Despite concerted efforts by the firefighters, the fire claimed 12 of the 18 trestles within Myra Canyon. In addition, the bridge decks of two of the metal bridges were also destroyed in the fire.

Soon after the Okanagan Mountain Park Fire in 2003, the B.C provincial government announced that it would rebuild the damaged and destroyed trestles and bridges. In addition, safety improvements including stabilizing rock faces along the line and clearing rock also has taken place. The trestles have since been rebuilt and the trail is fully open to the public. There are indications that plans for further improvement are in place, such as a restroom located at approximately the middle of the trail.

Two people had recomended visting the Summerhill Pyramid Winery and it was not far from the KVR.  It is a lovely spot with great views over Lake Okanagan. It was a very popular spot with the tourists with about three tour buses in when I got there.  It was the 17th of July but in NZ it was already the 18th of July which is my birthday so I had been receiving many messages so felt I should have a little NZ celebration – lunch for one overlooking the Lake was just the ticket.

Summerhill is committed to producing 100% organic wine, and has received Demeter Biodynamic certification for our Kelowna vineyard in 2012. Certified organic status was achieved in our cellar in 2007, allowing us to display the Canadian certified organic logo on our bottles, ensuring that a level of quality and purity can be expected by the consumer.

They have also built a replica of the great pyramid in Egypt to cellar there wine in.  The reasons for this are very interesting.  The Summerhill Pyramid is second only to the Great Pyramid of Egypt for alignment and precision.   The message is profound. They have done a twenty year experiment proving the effect of sacred geometry on liquids with a twenty year track record of international gold medals.

The word Py-ra-mid means “fire in the middle”. We all have this fire in the middle. It is our hearts, our souls. We are mostly liquid and we are affected just like the wine is effected. The effect is clarification. If a wine has a flaw in it, the flaw is accentuated. If the wine has good qualities, they are enhanced. We humans are mostly liquid so when we enter this sacred chamber, it is a grand opportunity to clarify our own inner selves. This chamber helps us to get to the knowingness of who we are. We are electrical in nature, with impulses running from our brains through our spinal columns. We are receivers, we are conduits, and this chamber enhances our receptiveness, opening the left and right sides of our brains, much like the dolphins, whales, and elephants who are in touch with Essence, the all-one ‘soul of the world’.

The experiment is an overwhelming success! The conclusion… There is a definite and profound effect on liquids placed in sacred geometry. Three years of conclusive taste test comparisons in the 900 ft² pyramid led to the building of our new Pyramid that is a 4 story high 3249 ft² 8% replica of the Great Pyramid. Every day at 2 o’clock for three years, we toured the smaller pyramid with the general public. We did taste comparisons of the same wine, bottled on the same day, and served at the same temperature. One was stored in the pyramid for 30-90 days and the other never having being put in the pyramid. The results were overwhelming. The tasters chose the pyramid-aged wine almost unanimously every day as being smoother and having a better aroma. These experiments boosted our convictions that indeed, a precisely constructed pyramid (that was oriented to true north versus magnetic north, and that was constructed without the use of ferrous metals so that it would not be reoriented to magnetic north) becomes a chamber for the “clarification” of liquids. For instance, a bad tasting wine, or juice, would become more foul tasting. The chamber seems to bring out flaws as well as exaggerating the qualities. We humans are made mostly of liquid and seem to be affected by the chamber as well. We can actually feel our own “life force energy” strengthen within the Pyramid! 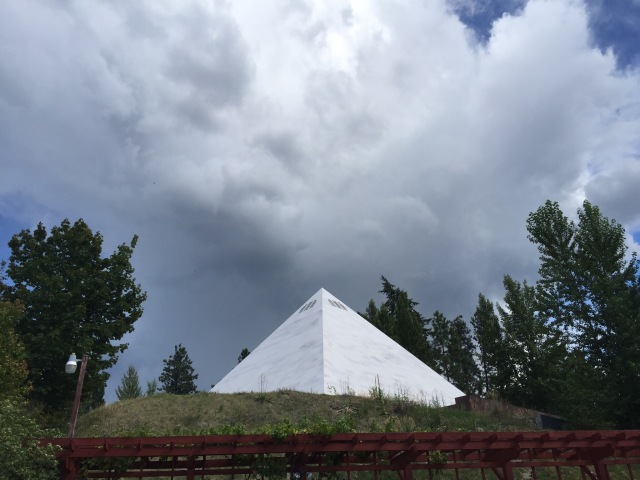 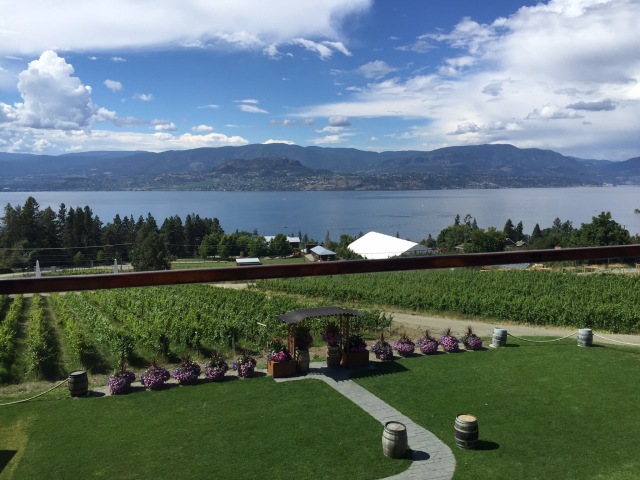 This blog was originally set up to share our 9 month adventure around Europe and the USA with friends and family in 2014. On returning to NZ in January 2015 I decided to carry it on so I could continue to share any future travel adventures - it has become my electronic travel diary. I hope you enjoy and get inspired to visit some of the wonderful places we have visited.
View all posts by SUNGRL →
This entry was posted in Canada, Okanagan Valley. Bookmark the permalink.