We have just spent the last four nights at the Predator Ridge Golf Resort.  Steve was invited to play in a 54 hole tournament by our Canadian friend Gary.  This tournament is called the Holland Derby as it was initiated by Ken Holland.  Ken Holland is the General Manager of the Detroit Red Wings Ice Hockey Team who play in the National Hockey League (NHL) so there were a lot of guys at the tournament that have had or currently have an association with NHL.  Ice hockey is the national sport in Canada.  Ice hockey and the NHL are all new to us so it was fascinating learning about how the league works and who are the major players etc…

Ken Holland has gained a reputation as one of the most successful General Managers in the NHL.  Under his leadership as GM the Red Wings have won the Central Division ten times, the regular-season Conference title five times, the Presidents’ Trophy four times, and the Stanley Cup three times, and won more regular-season games (789) and postseason games (118) than any other NHL team.  The Stanley Cup has been around since 1893 and is the oldest sports trophy in North America.  Apparently it is the creme de la creme of NHL.  After a series of league mergers and folds, it became the championship trophy of the National Hockey League (NHL) in 1926. Today, the championship round of the NHL’s playoffs is a best-of-seven series played between the champions of the Eastern and Western Conferences.

We arrived into Kelonwa (pronounced Colona) on Thursday – we flew from Vancouver which is only an hour’s flight.  Gary picked us up from the airport – it was good to see him again.  We first met Gary and his wife Anita in 2014 – we were on a shore excursion in Naples and the Isle of Capris and sat next to them and their Canadian friends Pat and Kaye on the ferry.  It turned out they were all keen golfers and the conversation went from there.  Steve and Gary met up most days after that on the cruise ship to play mini putt – apparently Steve holds the Canada Cup in mini putt.  Anyway we kept in touch and now we have come to visit them in their native Canada.  They actually live in Medicine Hat, Alberta so we will be heading that way next week.

Thursday was a practice round on The Ridge course and Steve and Gary were partnered together.  Pre match they were like little kids getting ready for a birthday party – they were so excited to get out on the course.  They played pretty well and were very happy with themselves although they were just out of money contention.

The tournament proper started the next day and it was a different kettle of fish – you have drawn partners and you play off the Tips – these are the tees right at the back, effectively where the pros would play.  Pretty hard work for the old fellas :). Steve’s partner was Gilly who has a reputation for drinking whisky and smoking cigars all the way around the course.  They had fun but didn’t do particularly well in the golf stakes.  Some of the Canadian guys are quite touchy feely, hugs all around etc… When you do a good shot.  Steve is not used to this and it became a bit of a joke – he reckons he was too scared to get a birdie due to the amount of man love he would experience!  The first day you played to your normal handicap, the second it was halved and the third it was halved again.  It was the best team score per hole that counted.

Overall Steve played OK but found it really tough playing so far back.  He loved meeting all the guys and enjoyed many a drink with them all each evening.  Ken hosted a pizza party at his house on the shores of Lake Kalamalka which we were invited to.  What a beautiful spot.  We all made our own pizzas and cooked them in the outdoor pizza oven.  I got to meet the guys and some of the wives which was good – there were about 40 guys that played in the tournament.  I got lots of hugs too!  It turns out Ken isn’t much of a hugger so him and Steve devised a plan for the final night.

I acquired a couple of tape measures on my travels and we made “Personal Space Measures” for Gilly and Gary who was the biggest hugger of them all.  Steve presented these to them at the final presentation and apparently all the other guys thought it was hilarious.  The personal space measure was originally devised by Rose, one of my Business Like colleagues who thought Steve sat too close to her when they were working at her desk – it was a bit of a joke between them so Rose presented Steve with his own “Personal Space Measure” – ironic really : ). Steve’s defence was that the desk was too small.

All in all Steve had a blast and we really enjoyed staying at the resort.

Steve on the practice range on Day 1 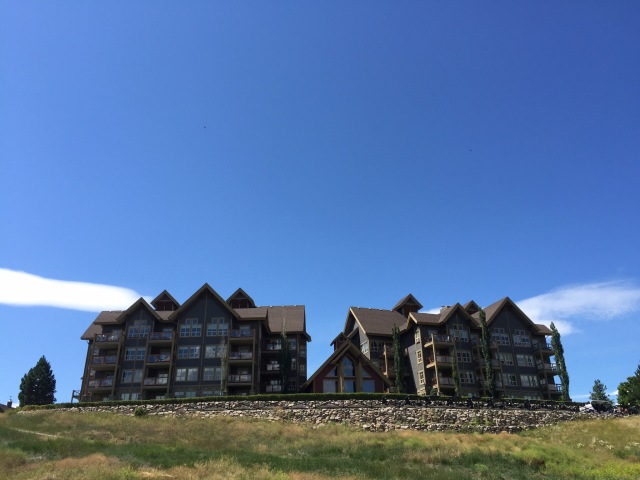 The Lodge where we stayed 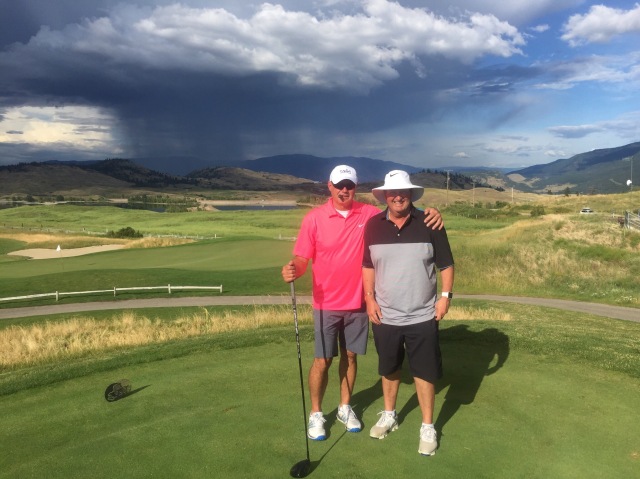 Steve, Gilly and the other pair they played with – Dan & Tony.  Tony, as well as having his own private practice he is the Doctor for the Detroit Red Wings 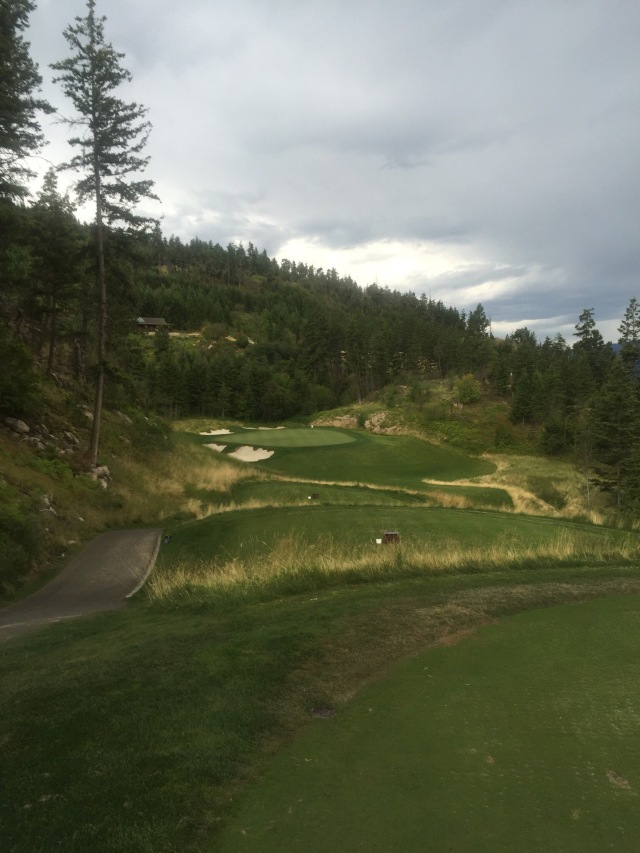 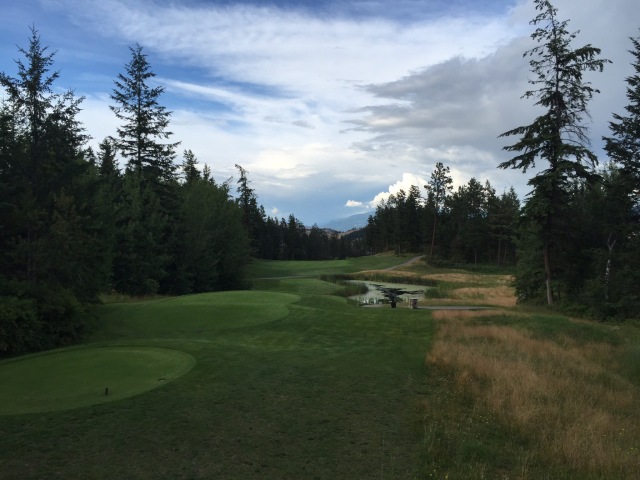 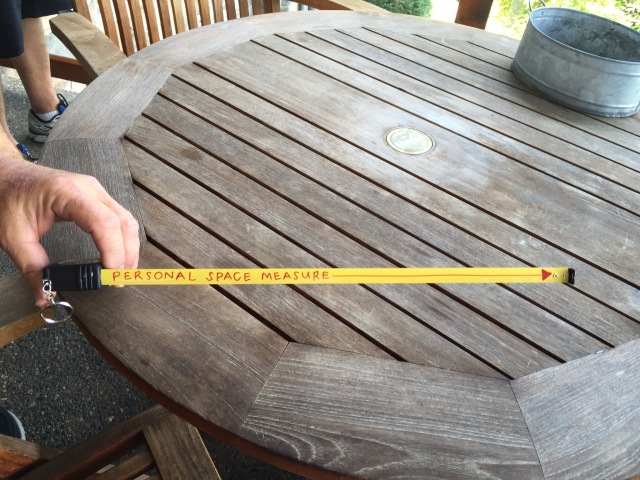 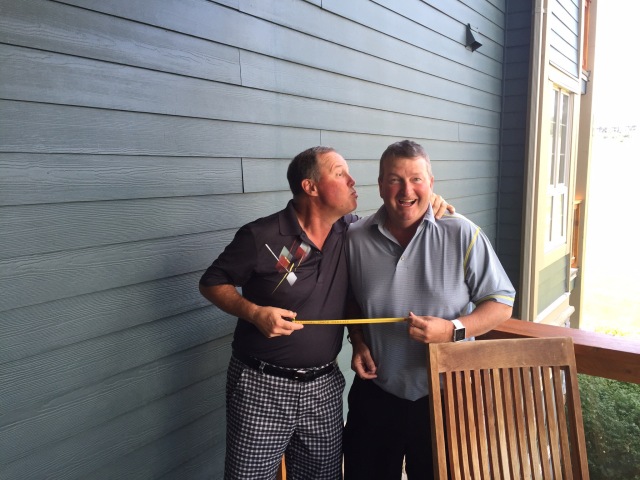 Meanwhile I was a golf widow but had no problem entertaining myself. There are 25km of biking and hiking trails around the resort so I went exploring on these most days. The first day I did a walk up to the Lake Okanagan lookout. It took me a little while to find the start of the trail – my Adventure Racing buddies would have been proud of me for preservering with map in hand! I came across a couple of amusing signs on day one – “Turtle Crossing Slow Down” and “Warning Bear Sighting in Area”. I must say I jumped a couple of times when I heard rustling in the bushes! I did see a small snake one day too – it slithered across the path in front of me. It was very well camouflaged and it was only the fact that it was moving that I managed to spot it.

It is a beautiful spot and I enjoyed all the walks. The scenery reminded me of Switzerland with the mountains and lakes.

I drove myself around the Okanagan Valley as you can see from my other blogs. Steve was freaking out that I would ding the car or drive up the road the wrong way – it is left hand drive over here. I had no problems and feel quite comfortable driving on the other side of the road. Steve experienced that the night I drove them to the pizza party so has decided that perhaps I should do the majority of the driving going forward! 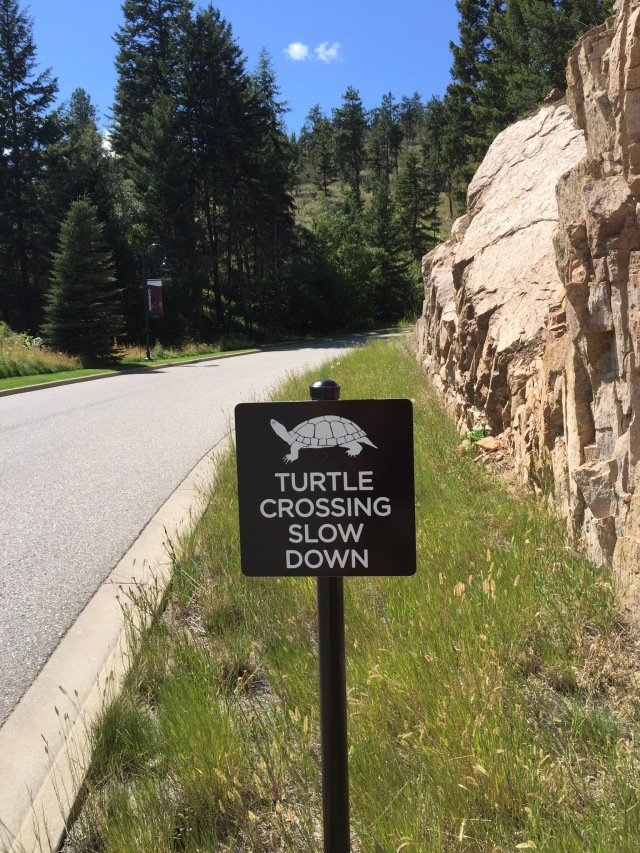 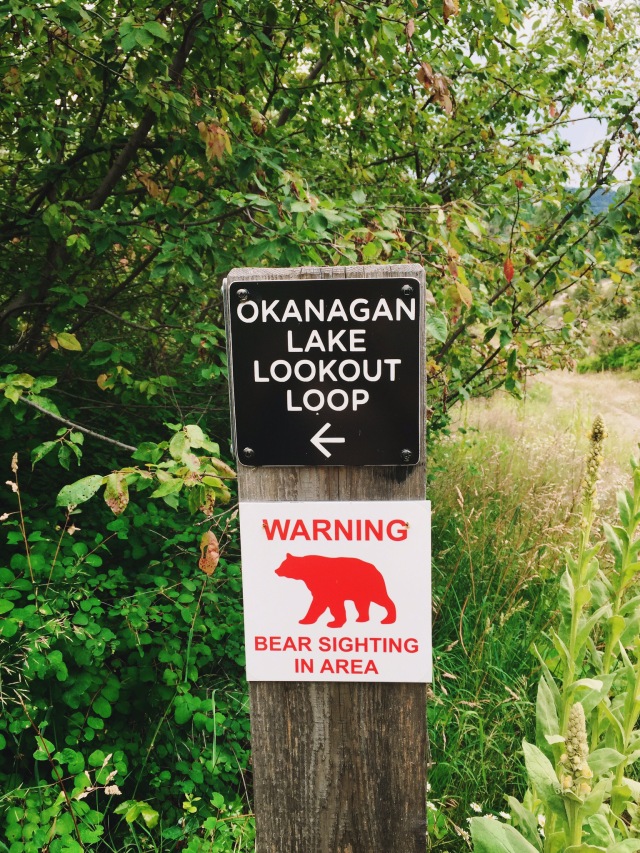 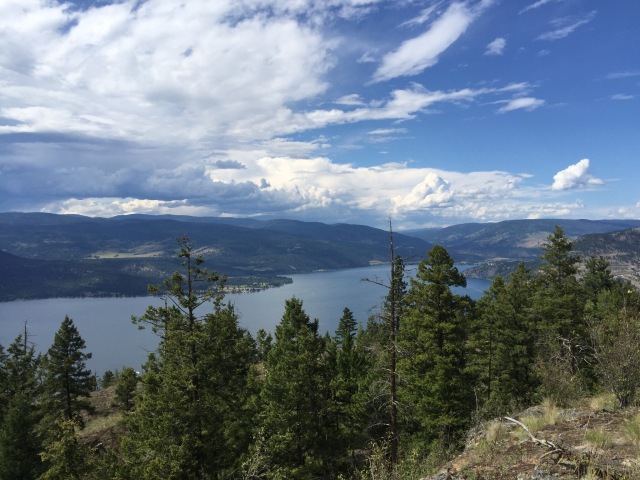 Predator Ridge Golf Resort is a 36-hole golf resort community in the Okanagan Valley outside Vernon, British Columbia.
Predator Ridge Resort spans 1,200 acres and is home to a community of over 800 people.

Opened in 1991, Predator Ridge originally consisted of 27-holes, designed by Les Furber. The three nine-hole courses were named after resident birds of prey: The Osprey and The Red Tail (built in 1991) and eventually The Peregrine built in 2000.  To expand into a 36-hole golf facility, architect Doug Carrick was hired to build 9 new holes as well as renovate the original 9-hole Peregrine course. This new 18-hole golf course was renamed The Predator Course.

In 2010, Carrick opened another 18-hole course which was named The Ridge Course. Predator Ridge is the only Golf Digest 4.5 star course in the Okanagan, and was voted as the best BC golf course by the Vancouver Sun.

Designed by Carrick, the Ridge Course is a par-72 championship 18-hole course which opened in July 2010.[4] It was voted best new golf course in Canada in 2010 by Scoregolf. From the tournament tees, The Ridge Course measures 7123 yards with a slope rating of 133 and course rating of 73.8.

The Predator course was designed by Furber. The course hosted the Telus World Skins Game, twice, in 2000 and 2008.  It is a par-71 golf course with elevated greens and links-style bunkers. From the tournament tees, The Predator Course measures 7090 yards with a slope rating of 137 and course rating of 74.2.

This blog was originally set up to share our 9 month adventure around Europe and the USA with friends and family in 2014. On returning to NZ in January 2015 I decided to carry it on so I could continue to share any future travel adventures - it has become my electronic travel diary. I hope you enjoy and get inspired to visit some of the wonderful places we have visited.
View all posts by SUNGRL →
This entry was posted in Canada, Okanagan Valley. Bookmark the permalink.