Today we said goodbye to our glamping site as we were on the move to the Roxburgh area for the next installment of cycling.  The weather was definitely on the improve.  The drive from Lake Hawea to Clyde took about an hour and a half.

The first part of today’s cycle was along the Clutha Mata-au River between Clyde and Alexandra.  Some of us had done this ride before on completing the Central Otago Rail Trail.  It is about 12km long and is such a lovely ride.  Our morning tea spot was at The Courthouse Cafe in Alexandra – this cafe is so nice and is located in Alexandra’s original Courthouse built in 1876.  After refuelling and purchasing some items for lunch we headed back down to the river to get onto the Roxburgh Gorge Trail. 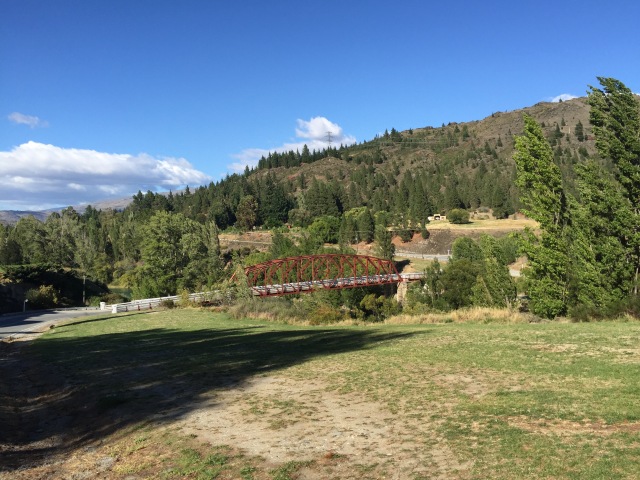 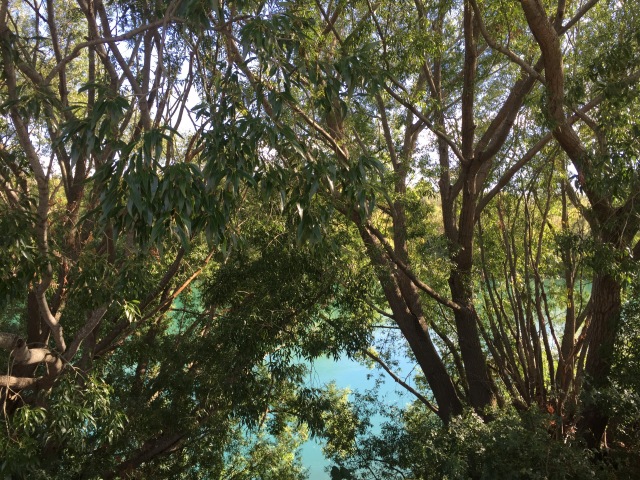 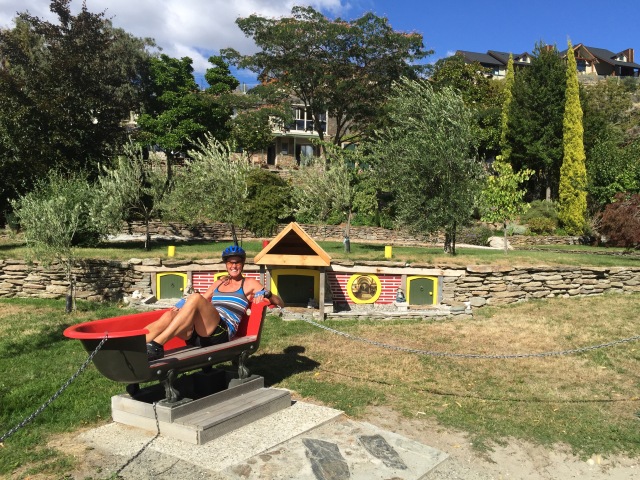 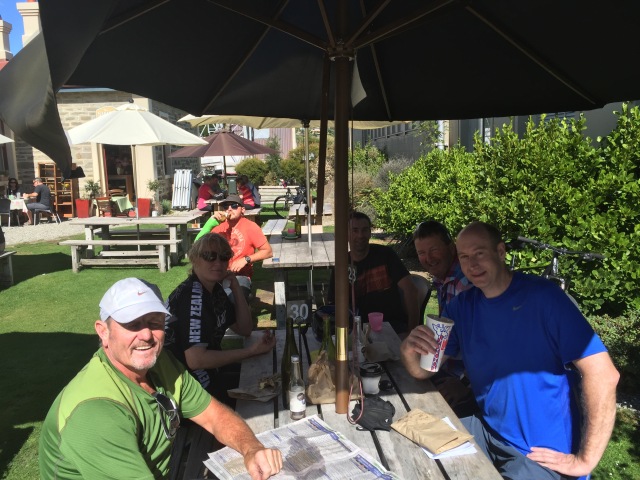 The Roxburgh Gorge Trail was opened in October 2013.  The trail starts at Alexandra’s old stone bridge, which sets a flinty tone for the first section of the trail which passes through the gorge’s narrow gates, flanked by bluffs almost 350 metres high in some places. Despite rocky terrain, riding is made easy via a wide, smooth trail with a few gradual climbs.  Unfortunately it wasn’t a smooth ride for Steve Impey who managed to become separated from his bike coming down a hill.  His knee started to swell so he decided it was probably best to turn back and take a ride in the van. 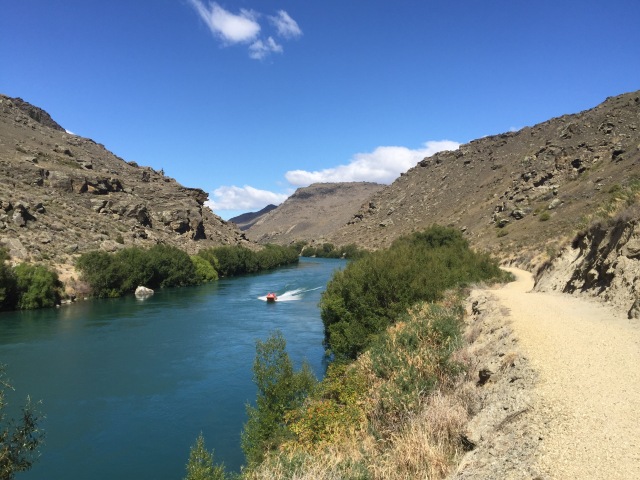 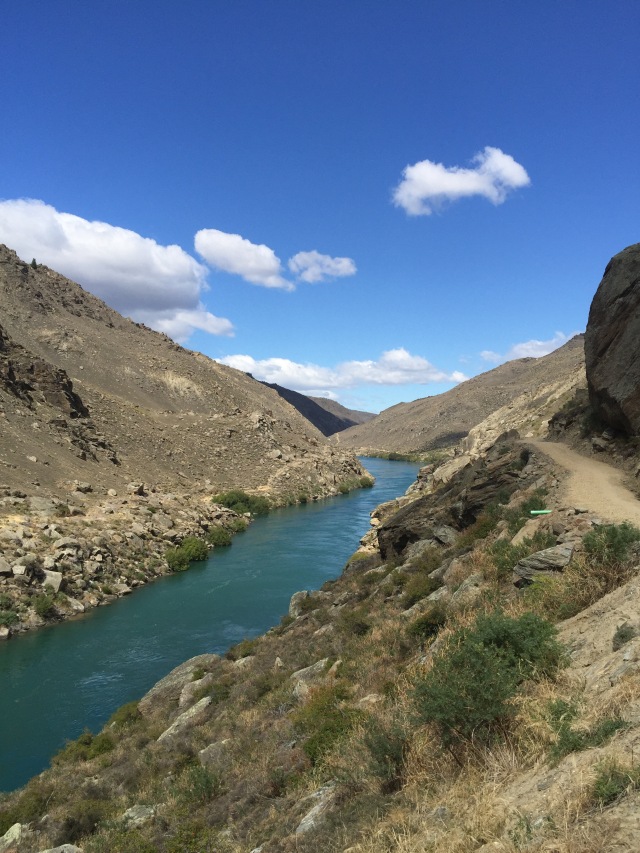 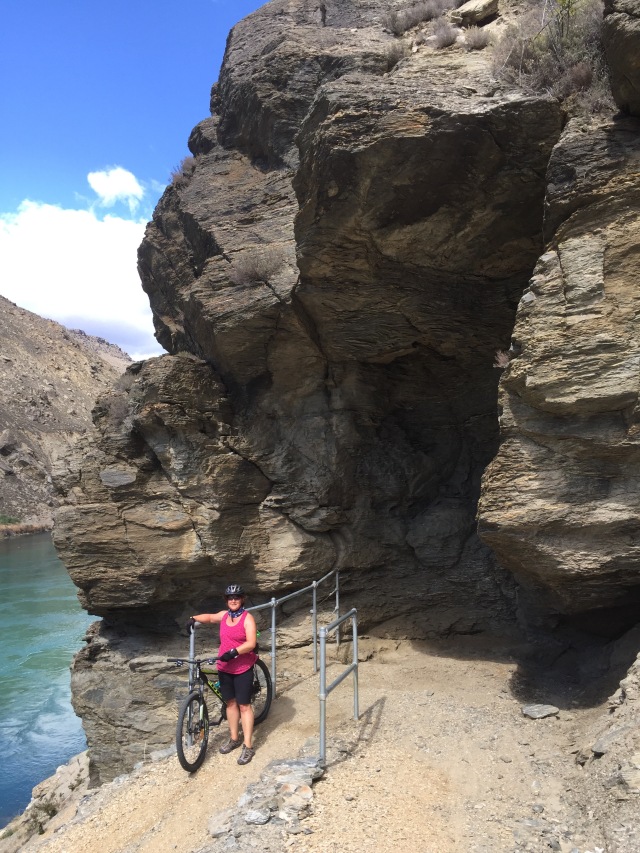 The first part of the trail is 10km in length and the views are spectacular – you really get up close and personal with the River.  The middle section of the trail is impassable at Doctors Point so we had arranged for Lawrence from Clutha River Cruises to transport us and our bikes by jet boat 12km down the river.  We had to split into two groups.  Karen, Ross, Andy and I were in the second group – we got to Doctors Point just in time to see the first group whizzing around in the River. 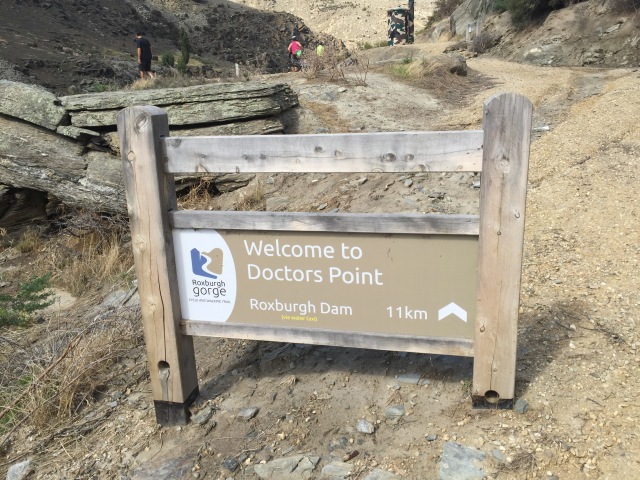 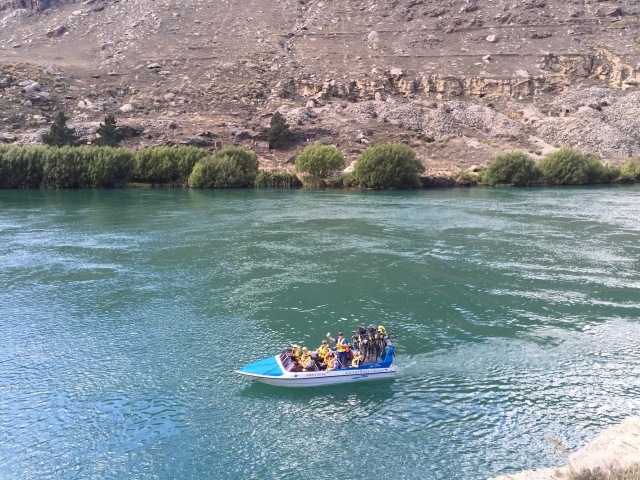 It had got quite warm and the River looking very inviting.  We decided to do some promotional shots with the Cactus Water : ) 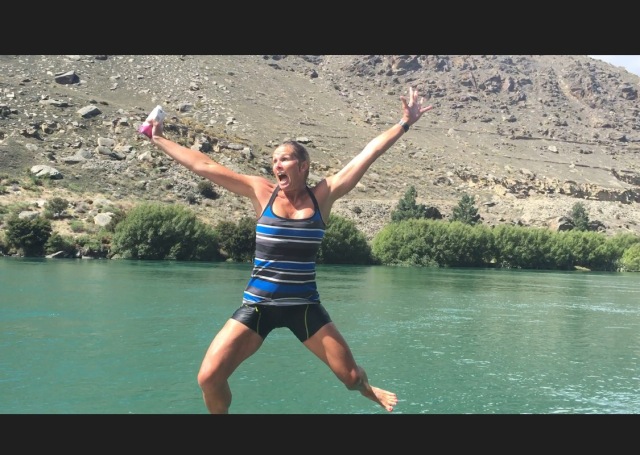 Lawrence returned after dropping the first group off and loaded our bikes onto the boat.  He gave us some background information in relation to the gold rush days in the area and pointed out the fascinating gold rush-era relics including schist huts and water races built by the Chinese miners.  There was even a little schist hotel and pub still in tact.  The scenery was amazing and I was thinking that this trail would have to be one of the best rides I have done. 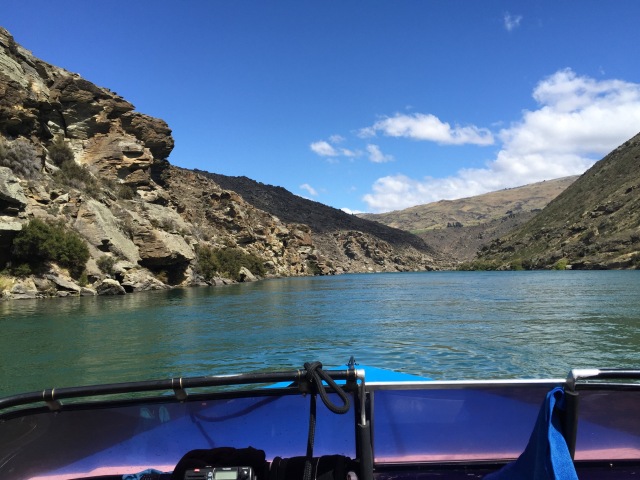 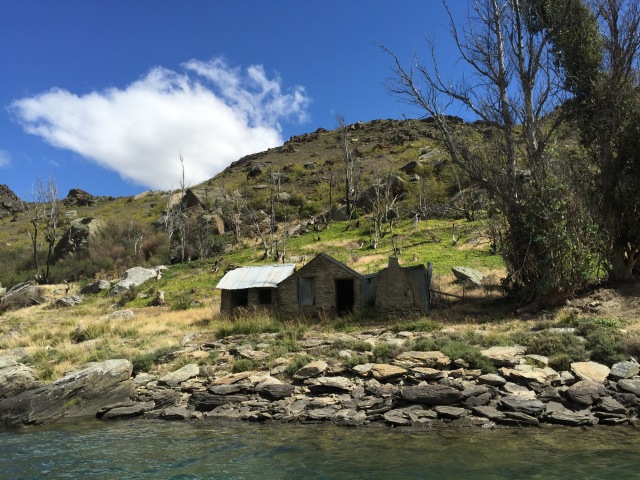 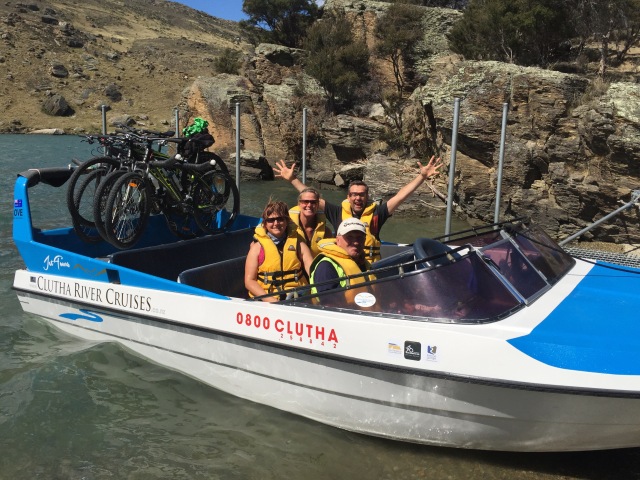 Gold was first discovered on a shelf at Doctor’s Point in 1877. Mining was difficult due to large boulders and a shortage of water, but returns were good. In 1913 gold was discovered even higher up. Heavy machinery was erected, but the same problems persisted. Mining resumed once more as part of a government scheme during the depression (1930s) and there was an influx of some 80 miners. The main race was refurbished using steel fluting and many stone huts were upgraded at the time.   I found an interesting article which I copied below regarding the destruction caused by the Dams.

Lawrence dropped us at Shingle Creek jetty where the trail climbs gently to follow a series of river bends that offer ever-changing views of the landscape. The river slows and widens as it reaches the Roxburgh Hydro Dam, the dramatic industrial monolith that signals the endpoint of the trail.  There are some cool switchbacks that climb gently to the vantage point over the Dam. 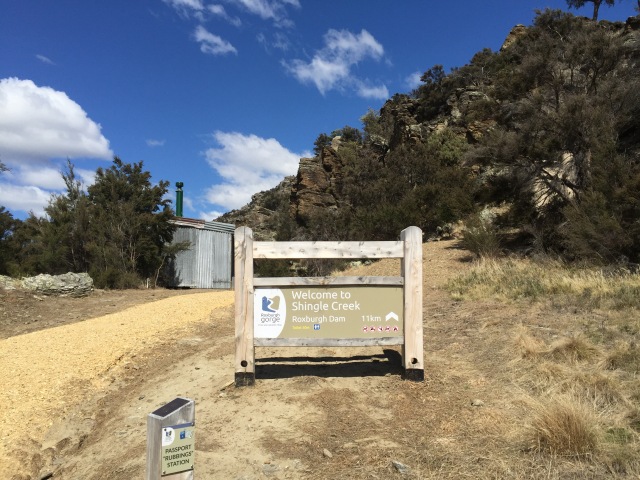 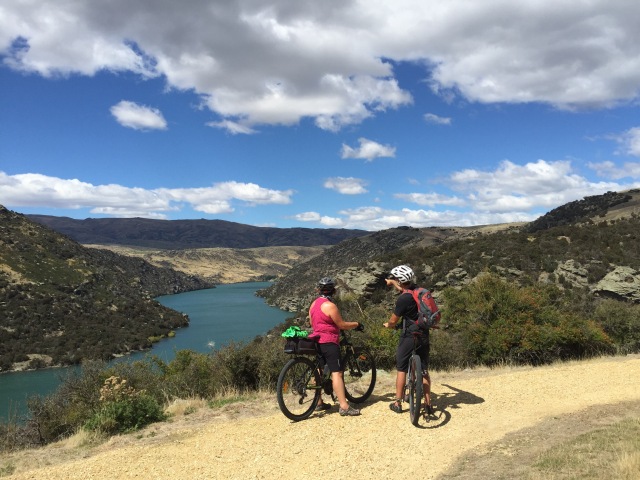 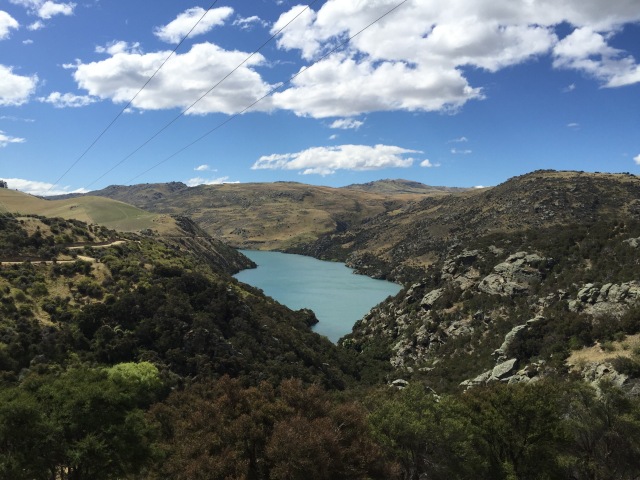 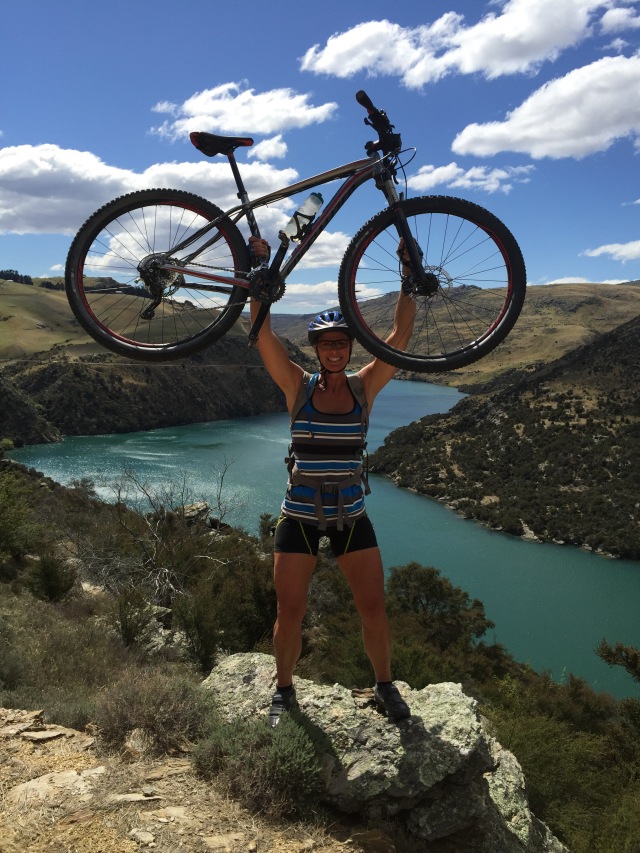 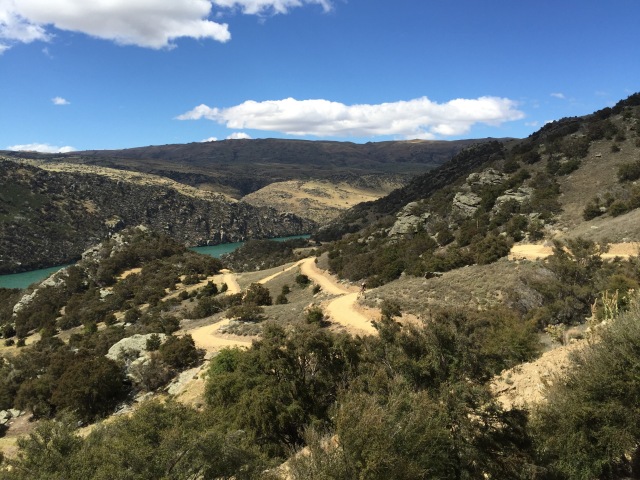 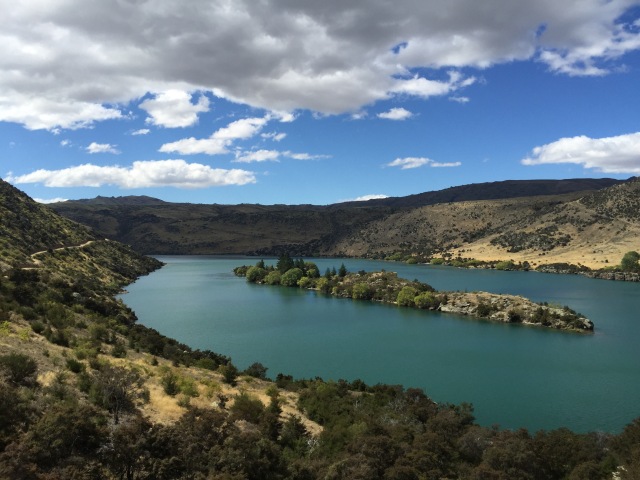 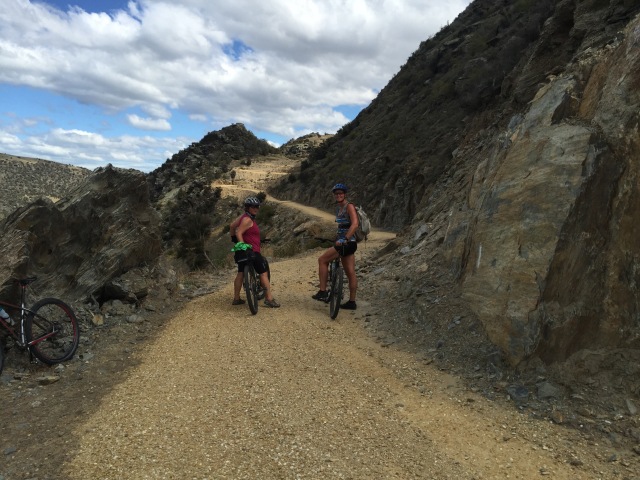 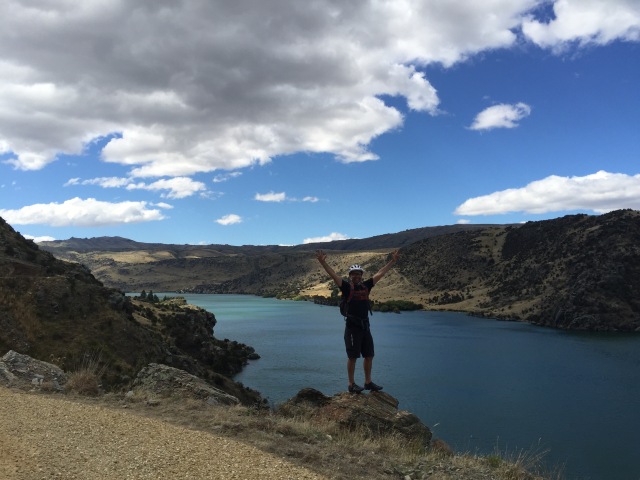 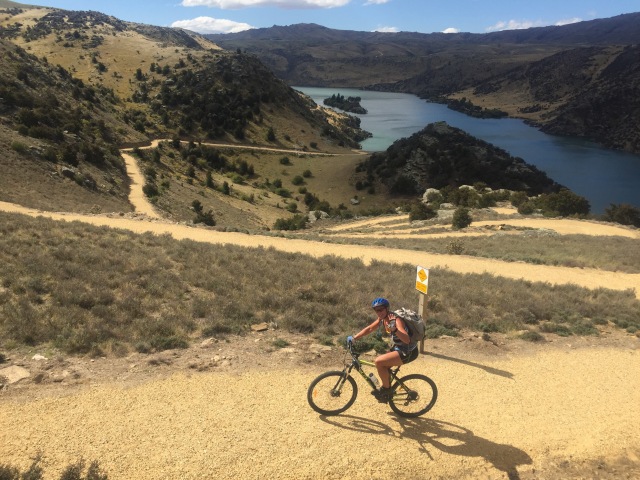 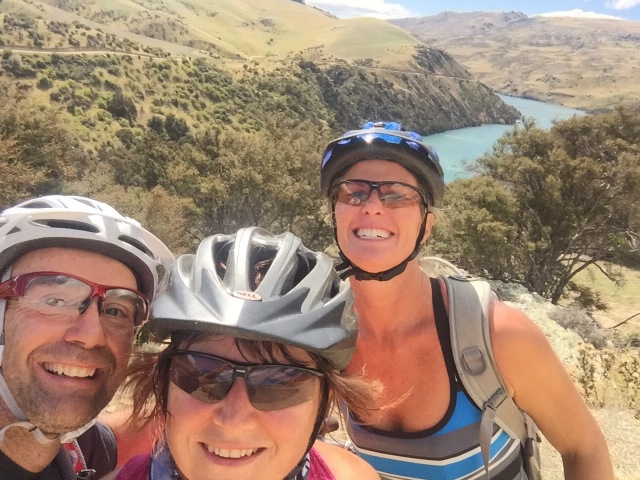 The Roxburgh Dam is the earliest of the large hydroelectric projects in the southern South Island of New Zealand.  The dam was constructed by a joint venture company between Holland, Hannen & Cubitts of the UK and S A Conrad Zschokke of Switzerland between 1949 and 1953.  Because of a lack of performance the initial contract was closed in 1953 and a new contract in which the original two companies were joined by Downer, a New Zealand construction company completed the main construction of the Station in 1957. The power station was commissioned over the period 1956-1962.  The generating capacity was doubled in 1961-62. Today the eight-unit power station has a capacity of 320 megawatts (430,000 hp) operated by Contact Energy.

We rode down into the Roxburgh Dam Village to Lake Roxburgh Lodge which was our accommodation for the night.  It is a lovely spot and the beers were flowing nicely as we enjoyed the garden at the Lodge.  Cheryl, Karen & I decided to go up to the dam and have a swim. I had really enjoyed my swim earlier in the day.  We met a couple of local kids who had been enjoying an afternoon swimming in the dam – they were very chatty and gave us an insight into their lives living in the area.  We gave them a ride back to the Village which they were very grateful for.

We enjoyed a lovely meal at the Lodge and had a catch up on our fine sessions from the past couple of days.

THE ‘Mighty Clutha’ forms the heart of one of the world’s most unique waterways. It traverses the dramatic semi-desert landscape of Central Otago, in the South Island of New Zealand, but the most spectacular river gorges, and much more, have been destroyed … by dams. This is the unofficial story of the Clutha Mata-Au River and its stolen treasures. It is a story steeped in bitterness, shame, destruction, and sadness.

Before the Roxburgh dam was commissioned in 1956, the 30 km Roxburgh Gorge was up to 400 metres deep, and so narrow that in places its towering walls rose vertically above the boiling waters of the Clutha Mata-Au. The river was so constricted that it flowed as swiftly as 40 kilometres an hour through narrow chutes hundreds of metres long. In other sections the current slowed – but not much, flowing over landslide obstructions that had at one time dammed the gorge, before being overtopped by massive rapids. Today’s sedate current bears no resemblance to the powerful torrent that once echoed through the gorge, drowning out the voices of men.

The first feature of the gorge, 675 metres below the Manuherikia confluence, was a constriction formed by schist bluffs on both sides that reduced the width to just 39 metres. This is now known as the “Italian Bend,” but the early gold-miners called this the “Gates of the Gorge.” Foot-tracks were etched precariously along the steep and boulder-tumbled walls of the gorge on both sides, as the miners hunted up gold and dug cave-like shelters under large slabs of fallen schist.

Just over five kilometres down the gorge from the “Gates,” and nearly two kilometres beyond Butcher’s Point, the true left wall of the gorge had long ago collapsed, blocking the river. The resulting over-topping waters had cut through the obstruction with unimaginable force, forming a torrential rapid that had over time, at its foot, scoured out a large, amphitheatre-like basin within high walls of unstable rock. This rapid, descending through a narrow chasm, was known as the “Golden Falls.” It filled the “Narrows” with a crashing din so loud that shouting men could not hear each other. In the centre of this basin below the rapid, the deeply driving waters had pushed up a shingle island. Hence, the name “Island Basin.” The Golden Falls and Island Basin were astonishing features in a remarkably dramatic location.

Beyond Island Basin at Doctor’s Point, two powerful rapids known as Doctor’s Falls No 1 & 2 dropped through a boulder strewn constriction below a maze of gold workings, stone cottages and cave shelters etched into the true-left side of the gorge.

Nearly two kilometres below Doctor’s Point, the river again met a sudden obstruction. A huge schist slab had slid down from the true left into the river, against which river-borne shingle and boulders had jammed up, creating a rapid so tumultuous that the gold-miners called it the Molyneux Falls. Here was a ferocious whitewater descent, tumbling violently some four-metres down a twenty-metre section of boulders, at breathtaking speed. At normal or low flow, these falls were deadly. In high flow they were somewhat washed out, but still incredibly swift.

The gold-miners, dreaming of lowering the river above the falls to expose gold, tried several times to blast the huge thirty by twelve metre schist slab that lay at the head of the Molyneux Falls. But time and again the slab didn’t move. Drilling and blasting merely succeeded in cracking the slab, so that it settled into place even more.

Further down the gorge, other rapids also raced through narrow chutes, until finally, at the southern end of the gorge, after boiling through massive eddies near McKenzie’s Beach, the current eased slightly as it passed another bluff at Coal Creek – a site selected for the construction of the Roxburgh dam in 1947.

It is worth remembering that the wonderful features of the old Roxburgh Gorge were never physically destroyed prior to the filling of the Roxburgh reservoir. They were flooded, and now lie mothballed in silt. Given the limited lifespan of the ageing Roxburgh dam, and the silting, flooding and instability issues of the gorge, there is an ever-growing case for dam decommissioning and gorge restoration.

Inevitably, some time in the future, the largest high volume rapids in New Zealand – the once thunderous Golden and Molyneux Falls, will be re-born. Gradually, decades of trapped sediment will be stripped away, and the long-hidden wonders of the Roxburgh Gorge will be revealed.

This blog was originally set up to share our 9 month adventure around Europe and the USA with friends and family in 2014. On returning to NZ in January 2015 I decided to carry it on so I could continue to share any future travel adventures - it has become my electronic travel diary. I hope you enjoy and get inspired to visit some of the wonderful places we have visited.
View all posts by SUNGRL →
This entry was posted in Central Otago, South Island, New Zealand and tagged roxburghdam, roxburghgorgetrail. Bookmark the permalink.