Our annual cycle trip this year was back in one of my favourite spots – Central Otago.  Central Otago is NZ’s most inland region, located in the southern half of the South Island. It is surrounded By Queenstown Lakes District in one side and Dunedin City on the other and includes the towns of Alexandra, Clyde, Roxburgh, Ophir, St Bathans, Ranfurly, Naesby and Cromwell.

We flew into Queenstown on Wednesday the 24th February ready to start the cycle the next day.  Andy from Natural High met up with us at Bespoke Cafe in Queenstown for breakfast.  The bikes were already loaded so we packed up the luggage and drove out to the airport to pick Ross & Cheryl up who flew in from Auckland that morning.

Today’s itinerary included riding from Queenstown Airport to Arrowtown and then from Arrowtown to Chard Farm Winery.  Unfortunately it was a bit of a gloomy day and we had a few spits of rain along the way.  We started the cycle along the Kawarau River where we saw a jet boat taking some tourists for a spin.  We the past the Queenstown sewerage treatment plant (affectionately known as the ‘pooh ponds’ by the locals) before reaching the historic Old Lower Shotover Bridge.

The Old Lower Shotover Bridge was built in 1871 although this was washed away in 1878 by flooding.  It was then rebuilt by the Public Works Department and re-opened in 1915.  It is 172 metres long and stands 16 metres above the river.  The shallow waters of the Shotover River feed into the Kawarau River, which draws water from the Frankton arm of Lake Wakatipu. 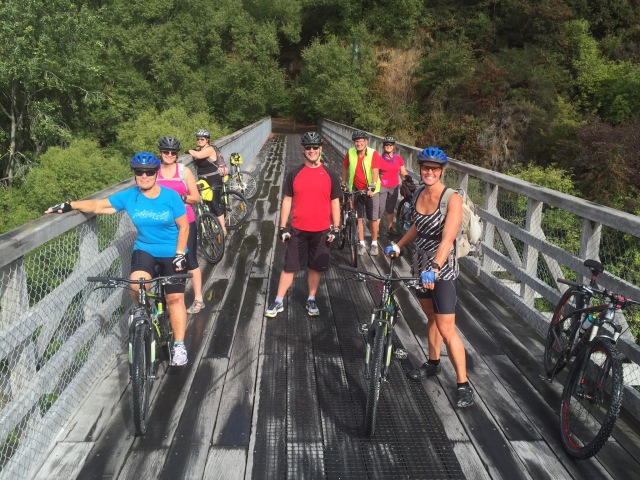 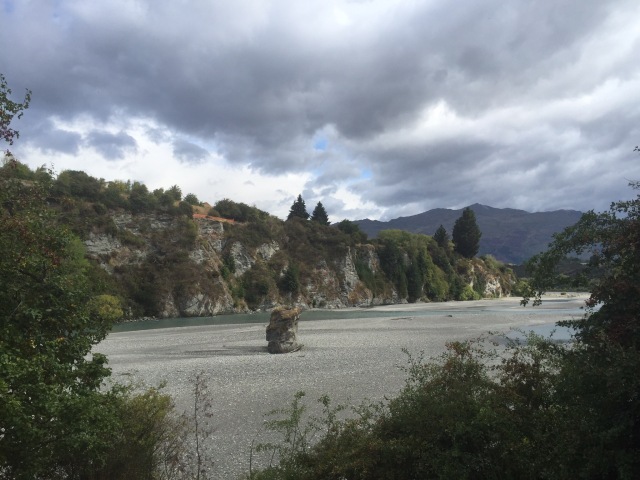 We took the Queenstown Trail which has quite a steep climb on it so we had to do a bit of bike pushing.  We meandered through the Millbrook Resort which is home to a 27 hole golf course and a large number of residences owned by a diverse group of investors.  The original 18 holes were designed by Sir Bob Charles but they have been significantly upgraded.  The additional 9 holes were designed by another NZ golf Pro – Greg Turner and his business partner Scott McPherson. 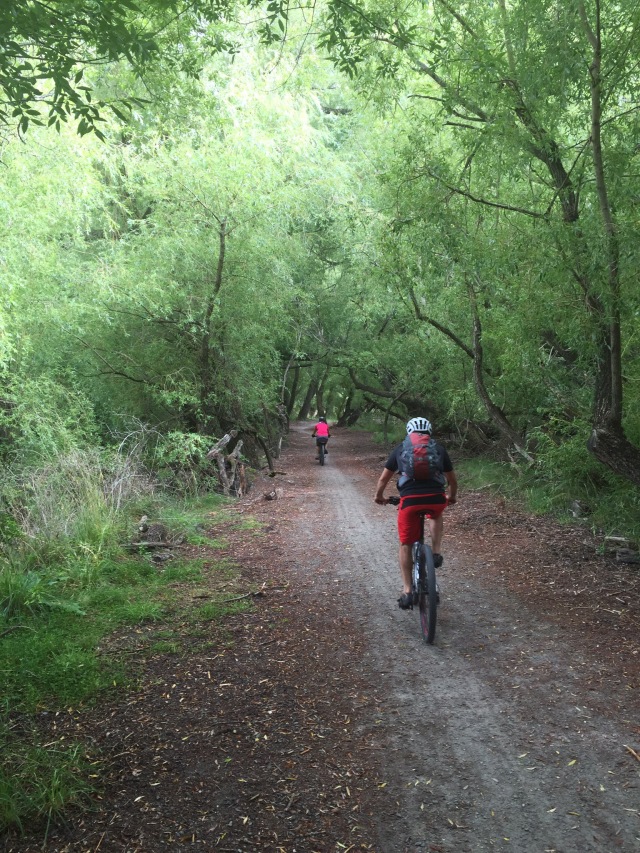 Our next stop was Arrowtown where we had lunch.  Arrowtown is a charming and quirky old gold rush town.  The main street has many small town heritage buildings that stretch into a tree lined avenue of tiny miners’ cottages.  There are lots of restaurants and nice shops – this is a popular spot for the tourists who visit the region.

Arrowtown sits in the Arrow Basin alongside the Arrow River.  Gold was a discovered in the Arrow River in 1861 and by 1862, 1,500 miners were camped alongside the river.  In January 1863, 340kg’s of gold was lugged out by the first gold escort – this 340kg would be worth $18 million based on today’s prices.  When the West Coast goldfields opened in 1865 many European miners went over the Southern Alps in search of new gold.  The Government then invited Chinese miners to come and work.  The small Chinese Village they created remained settled until 1928 and you can still see some of its remnants today.

After lunch it was back on the bikes to ride along the Arrow River Bridges ride all the way out to the Kawarau Bridge which is used to bungy jump off.  This ride was fabulous – it gently undulated through the bush before continuing alongside the Kawarau River.  We got to the Kawarau Bridge where we saw some people jumping off.  Some of us jumped in the van to get a ride up the rather long driveway into Chard Farm winery while others rode it.  It was actually easier than it looked : )  In days gone by this driveway formed part of the old main coach link between Queenstown and Cromwell. 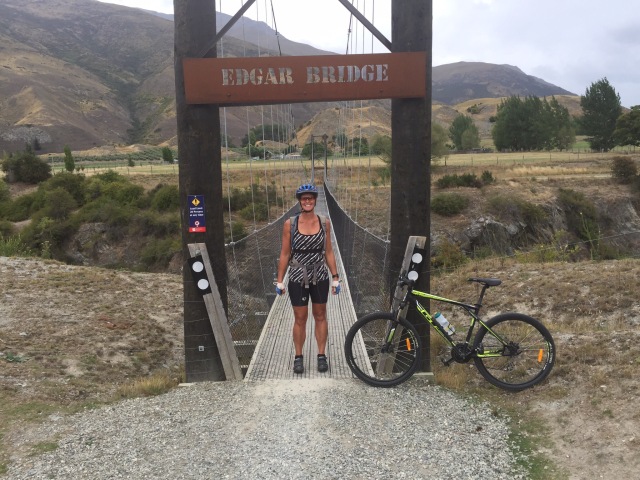 The famous Central Otago Dunstan Gold rush of 1862 lured Richard Chard from Dorset, England out to New Zealand.  He arrived at the tender age of 14 and worked in the Dunstan and Gibbston areas for several years before settling atthe Morven Ferry end of the old coach road to Queenstown, a place that is now well known in the area as “Chard Farm”.  Chard started with a one-acre strip, enough to accommodate a vegetable plot and an orchard.  Richard milked a couple of cows, kept a few hens and became more interested in supplying the miners with food rather than the allurement of gold.  Slowly the farm grew to its current size of 50 acres as small plots were taken over.

Richard died in 1905, leaving youngest son, Fred, to look after the farm.  Fred kept a bit of the market garden but concentrated on dairying and the first petrol driven milking machines were installed in 1929.  Apart from that little bit of technology, Chard Farm basically “stood still” for the next 50 years as Fred steadfastly refused to keep up with modern technology – “horse” power was the only power on Chard Farm.  The farm’s income was never more than $1000 a year – but as Eric Chard said, “we never made big money, but we were always happy and comfortable.” Fred and his son Eric moved to Arrowtown in 1978 – the end of an era.

Chard Farm then spent a brief period as a stonefruit orchard in the early eighties, during which a 4 million litre dam was built in the hills behind the farm to provide water storage for irrigation and frost fighting.

Rob Hay arrived back in New Zealand in 1985 after studying winemaking in Germany for three years.  He spent the year searching for a piece of land in New Zealand that best emulated the conditions – the “Terroir”- found in some of the greatest vineyard areas of the world – most notably the inland cool climates of Central Europe – Burgundy, Alsace, Champagne and South Germany.  Chard Farm was purchased in 1987 – it was the beginning of the Chard Farm Vineyard.

It was only fitting that a wine tasting followed the days cycling before jumping in the van for the trip to Lake Hawea and our accommodation for the next two nights.  We were going to be glamping on the shores of Lake Hawea – this was a first for the group.

Our glamping spot was nestled at the far end of the Lake Hawea Holiday Park and we enjoyed some lovely vistas over the Lake.  Tonight’s dinner was a BBQ  – Andy had gone to a lot of trouble to prepare a gourmet feast for us.  We had corn on the cob with butter three ways and this ‘to die’ for dessert – Pistachio Halva Ice Cream with Caramel Tahini Sauce.  Pre dinner we had some drinks of course, one of which was The Narcissist cocktail in Steve Thomas’s honour : )

It was a beautiful clear night and the moon was glowing brightly.  The wind did get up in the night though which created a lot of noise in our tents.  The tents had a lot of room and the beds were extremely comfortable. 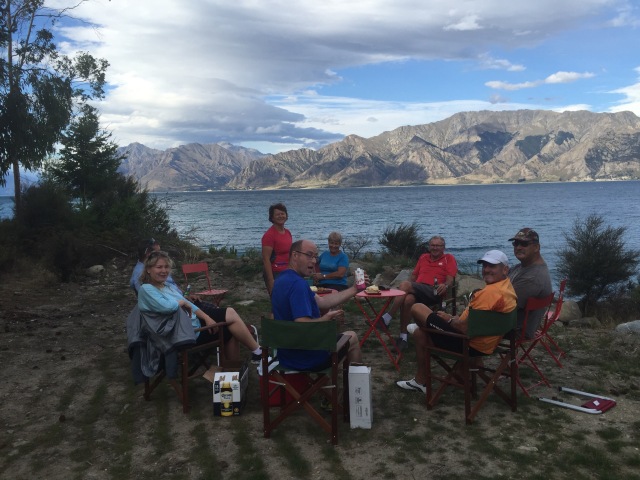 It was a much nicer day the next day but the wind was blowing a gale which does not bode well for cycling!  We had three rides planned for today – Albert Town to Wanaka, Wanaka to Glendhu Bay and Albert Town to Luggate.

Albert Town is the confluence of the Clutha and Hawea Rivers and where we started our ride along the Clutha River Outlet Track around the edge of Lake Wanaka into Wanaka.  This track is about 13km.  Lake Wanaka and it’s surrounds are stunning and the clear blue skies enhanced that even further. 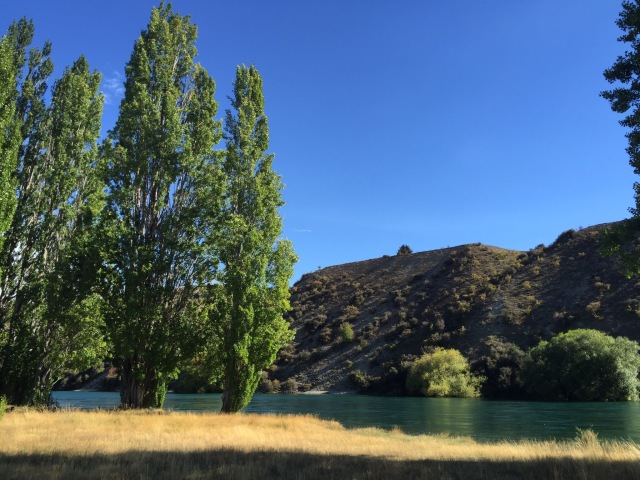 Wanaka is a popular ski and summer resort town in the Otago region of the South Island.  It is situated at the southern end of Lake Wanaka, at the start of the Clutha River. It is the gateway to the Aspiring National Park.  It’s economy is based on the many outdoor opportunities it has to offer.  The town was originally settled during the gold rush of the 19th century.

After some sustenance in Wanaka and the ever increasing winds we decided to do the Glendhu Bay Track in reverse – Glendhu Bay to Wanaka.  This track winds its way alongside Lake Wanaka and we felt pretty exposed in places.  It was also quite a challenging track with a few climbs and steep descents.

Jim had given us one of his new products to take promotional shots with – True Nopal Cactus Water.  This is supposed to be the next trend in relation to healthy hydration.  This challenge got the creative juices flowing – no pun intended : ) 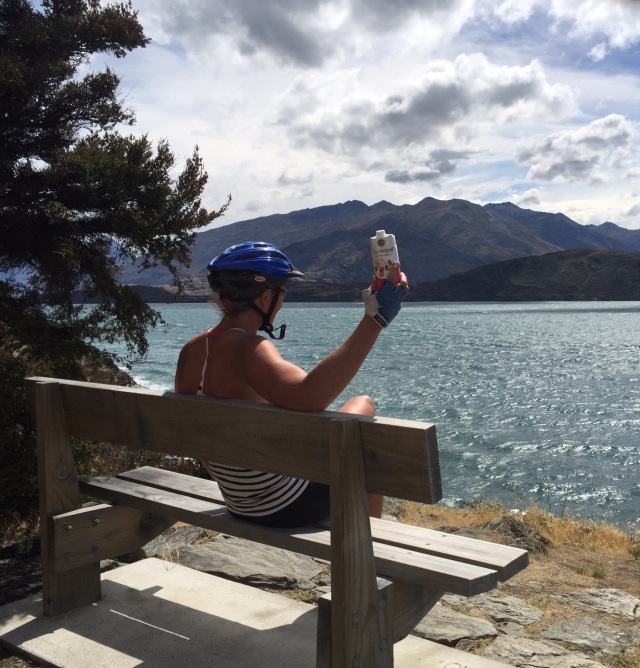 By the time we finished this ride the weather was not looking too nice and the wind continued to blow.  It was decided to pass on the third ride of the day and instead head back to our glamping tents to freshen up for the evening.  We tossed up cooking another BBQ but decided it was probably safer to go to the Lake Hawea Hotel where we could enjoy a nice meal and some beverages with no threat of the rain putting a dampner on the BBQ.  It was also a Friday night and the Auckland Blues happened to be playing the Otago Highlanders so a few of the boys wanted to watch the game.

It did indeed start raining so we had made a good decision.  The meal was great and the majority of the boys were happy as the Blues had won.  We then went back to our campsite and enjoyed a nice cuppa and slice of cake in Cheryl and Ross’s tent before retiring for the night.

This blog was originally set up to share our 9 month adventure around Europe and the USA with friends and family in 2014. On returning to NZ in January 2015 I decided to carry it on so I could continue to share any future travel adventures - it has become my electronic travel diary. I hope you enjoy and get inspired to visit some of the wonderful places we have visited.
View all posts by SUNGRL →
This entry was posted in Central Otago, South Island, New Zealand. Bookmark the permalink.