After a couple of weeks enjoying Chiang Mai we ventured further north to visit Chiang Rai – it took us just under three hours by car.  We were booked in at the River Rai Resort which is a new boutique hotel set alongside the Kok River.  On arrival we were greeted by the owner Greg and his offsider Kookai – they were both delightful and the resort setting was lovely.  We were in for a special five nights.

Our plans included golf, golf and more golf at the Santiburi Golf Course.  Each morning we would leave the Resort at 6am and be back by 10am in time for a delicious breakfast.  The quality and taste of the fruit was amazing and we also enjoyed freshly squeezed pineapple, passionfruit and watermelon juices.  The homemade pineapple jam was the icing on the toast : )

The Resort has five riverside rooms and four garden rooms.  The pool area was very inviting and the salt water pool refreshing and soothing.  The Resort opened just over a year ago and is establishing itself as a wholesome place to rest and relax.  The other bonus is that they had over 120 TV channels which included golf and rugby.  Most people don’t go on holiday in such a beautiful spot to watch TV but when you are as golf obsessed as Steve is and the final tournament of the Players Championship and Fedex Cup is on it is pure heaven!  Being from a land of rugby fanatics the Rugby World Cup viewing was also a bonus.  Generally in Asia the only sport available on TV is football and it is usually in a foreign language so Steve had been suffering a golf viewing drought for over two months!

We really enjoyed interacting with Kookai and her team – they were so lovely.  So if you’re ever visiting Chiang Rai we would highly recommend staying here – check out http://www.riverrai.com

We also enjoyed exploring the culinary delights Chiang Rai had to offer. 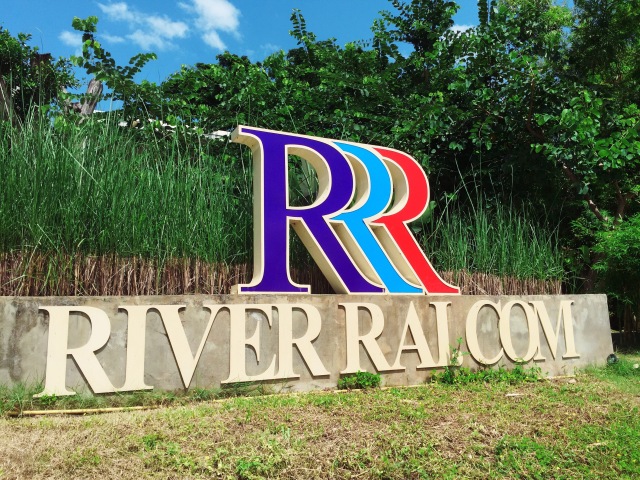 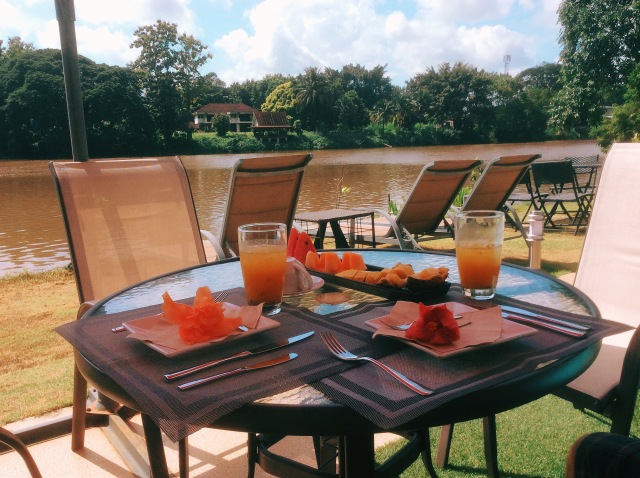 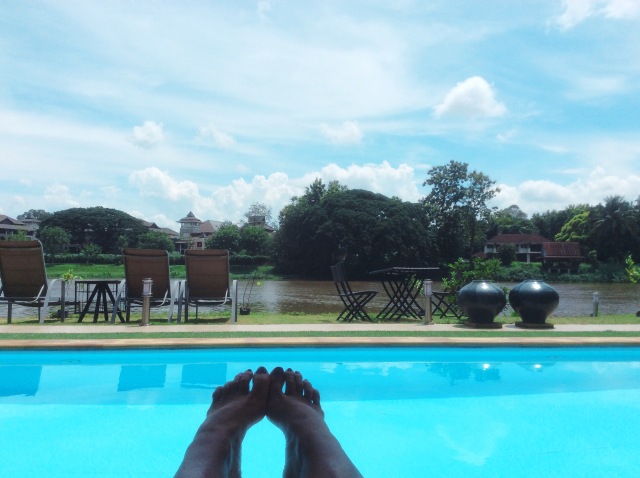 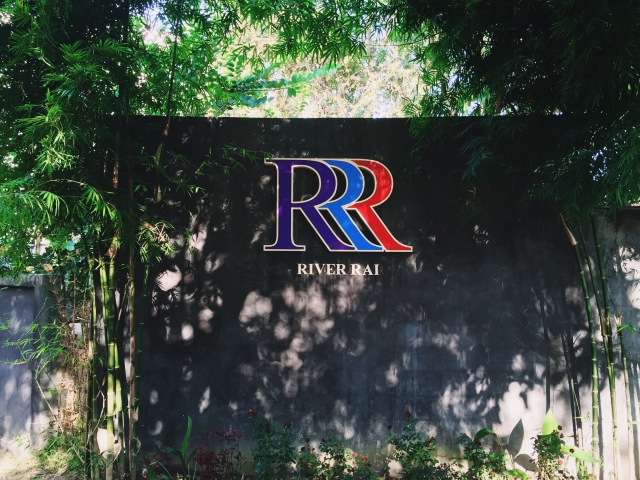 This cafe came up as number one on Trip Advisor in Chiang Rai and it was only a twenty minute walk along the river from the River Rai – perfect.  They also have a spa on site with both the cafe and spa being  housed in these old villas.  The garden setting alongside the river was very tranquil.  They had a great range of coffees, teas, fruit juices as well as delicious smoothies.  They also have an extensive food menu. I enjoyed a dried plum and wild honey smoothie one day and sampled the berry, berry smoothie another day – heaven.  The coffee was good too.  The coffee culture has really grown in Thailand with many cafe’s doing great coffee using local coffee beans – the coffee would be right at home on Ponsonby Rd : )

Chivit Thamma Da was founded by Nattamon Holmberg in 2009. Nattamon is a cake and coffee lover and has studied bakery and coffee growing/making at the best institutes in Thailand.  She gave up a fast life in big cities to slow down and live closer to nature in her native northern Thailand. She enjoys growing, cooking and eating food and is a strong supporter of the Slow Food movement and sustainable agriculture. 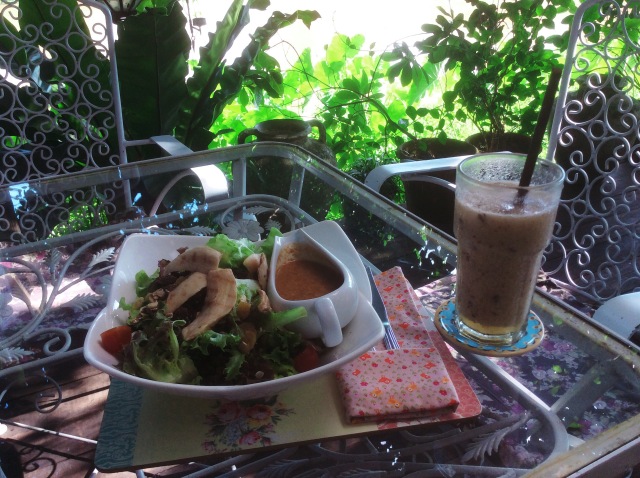 KK told me about Manorom Coffee which is just a bit further up the river.  Another amazing setting – I was quite surprised to find two such great cafes in what I would call off the beaten track locations.  Their reputations obviously precede them as both places are reasonably large and were busy when I visited.  I only intended on having a coffee the day I visited but the spinach and cheese tortillas were too tempting!

I sat outside and was joined by the largest Ants I have ever seen – they were definitely on steroids!  Luckily there were ony a couple of them who were more scared of me than I was of them : ) 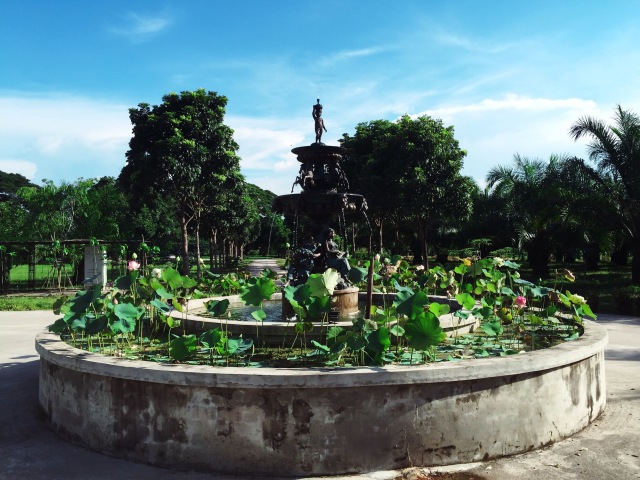 A couple of sights encountered on my daily walk alongside the river: 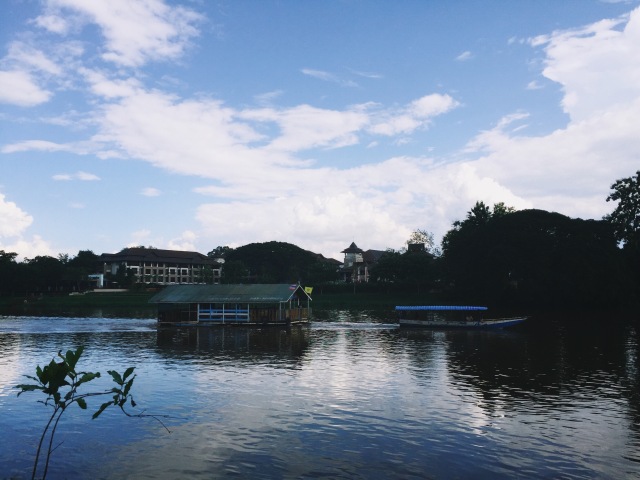 A House being pulled along by a Boat.  This house doubled as a restaurant and bar where we heard some pretty bad karaoke some nights!

71 Celcius Restaurant
Steve has a love affair with pork ribs and he has tried a few on his travels but they generally don’t live up to expectation.  Again, whilst looking on Trip Advisor he came across 71 Celcius which specialised in Pork Ribs.  Greg ad KK had not heard of this restaurant and it was out in the suburbs so even the taxi driver had a little trouble finding it.

It turned out to be a local semi open air restaurant with a limited menu – pork ribs, fish, nuggets with a selection of three sides – egg fried rice, salad and fries.  It was a hive of activity with many locals enjoying dinner there.  Steve ordered the large portion of ribs with two sides – NZD14!  I just had the salad and rice as I am not a fan of ribs.  Steve was in heaven – the ribs were fantastic.  My rice and salad were also lovely.  They may only have a small offering but what they do they do well.  The kitchen staff worked like clock work with one cooking the ribs on the BBQ, one in charge of the deep fryer and they other preparing salads.  The wait staff were also happy, friendly and efficient.  It was so good we went back on our last night in Chiang Rai too.  A winning formula! 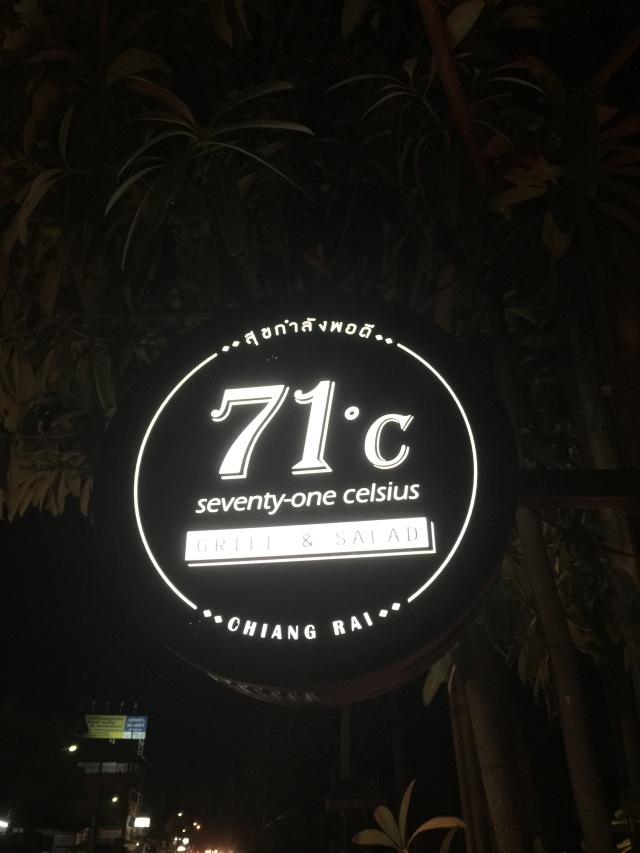 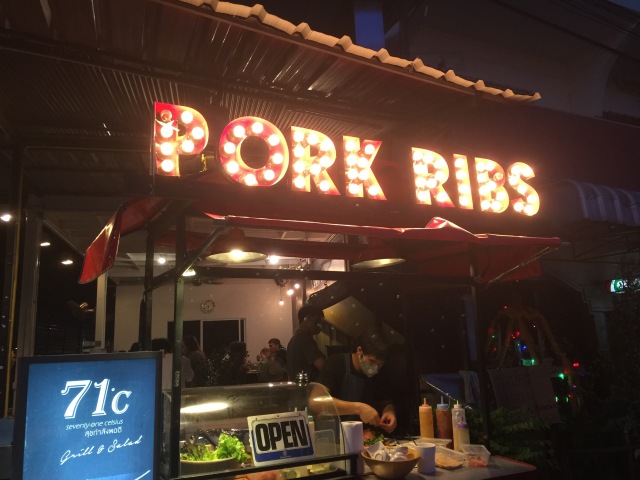 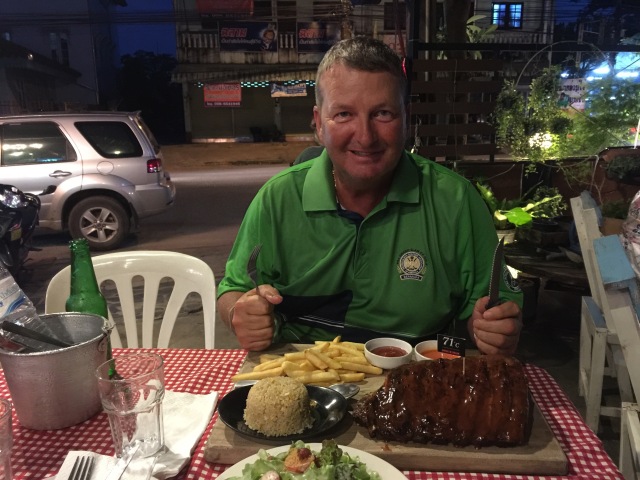 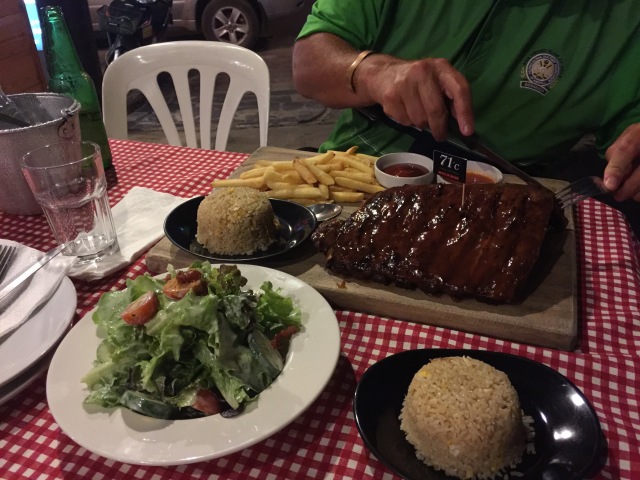 One night we came across Cabbages and Condoms which is a restaurant serving Thai food – we checked out the menu and liked what we saw.  The food was really good and we ended up ordering another main to share.

Established in part to support the activities of Population and Community Development (PDA), the Cabbages & Condoms (C&C) Restaurants offer a pleasant dining experience in several locations around Thailand. Not only do the restaurants offer excellent food, but they also promote the health and safety aspects of condom use in a fun and amusing manner. All proceeds from the restaurants are used to fund the social development programs of PDA.  Their focus is on making condoms as easy to get as cabbages and with the average number of children per family falling from seven in 1971 to two now it is obviously working : ) 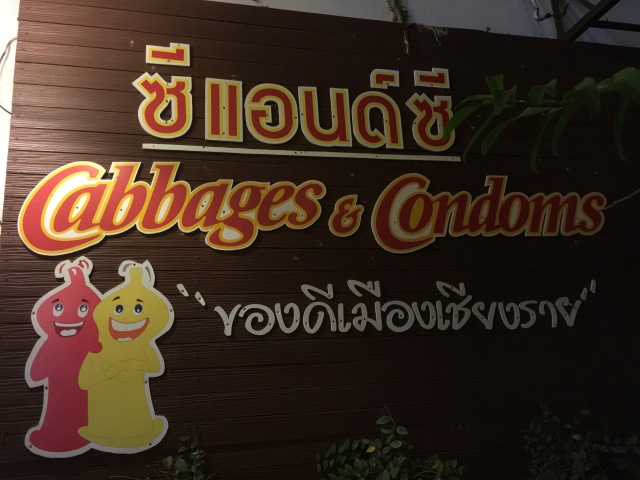 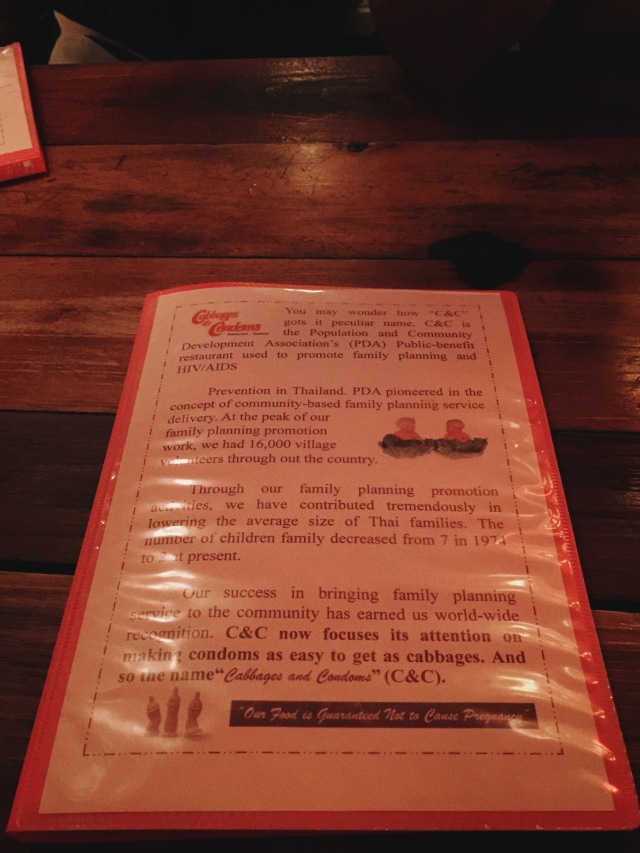 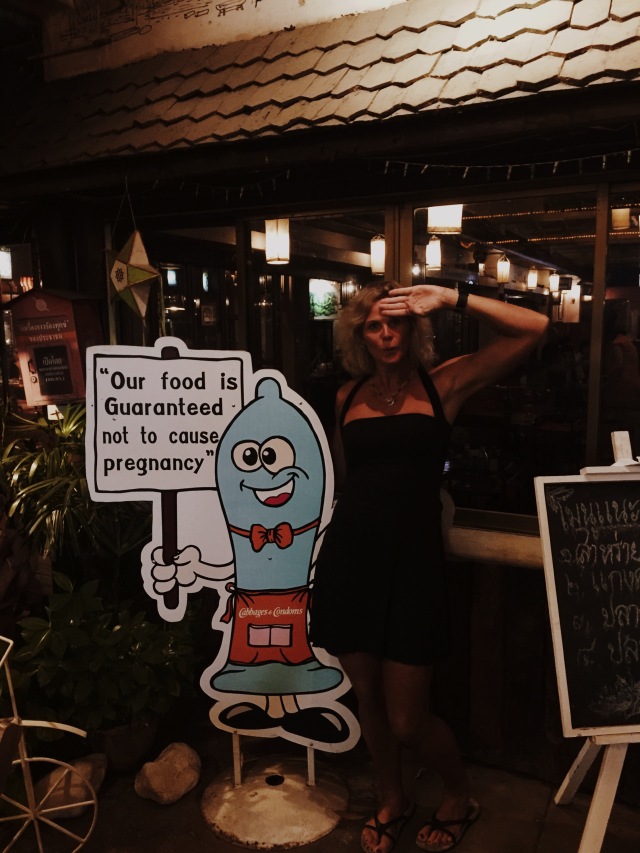 Chiang Rai is the northernmost large city in Thailand. It was established as a capital city in the reign of King Mangrai, in 1262 CE.  Chiang Rai was conquered by Burma and remained under Burmese rule for several hundred years. It was not until 1786 that Chiang Rai became a Chiang Mai vassal. Siam (Thailand) annexed Chiang Mai in 1899, and Chiang Rai was proclaimed a province of Thailand in 1933.

According to the Thailand National Statistical Office, as of September 2010, Chiang Rai municipal district had a population of 199,699. With the spread of the city extending into neighboring districts, the metropolitan area is considered somewhat larger by local residents. Chiang Rai city is the capital city and business center of the Chiang Rai Province, home to 1.1 million residents.

12.5% of the population belong to hill tribes, a collective term for the minority ethnic groups in north Thailand such as the Karen, Akha, Lisu, Meo, and Hmong.

The city centre has a pretty impressive cock tower – see below.  Not sure if it is my cup of tea and from a couple of comments I heard from the locals they too think it is a bit ostentatious.

This blog was originally set up to share our 9 month adventure around Europe and the USA with friends and family in 2014. On returning to NZ in January 2015 I decided to carry it on so I could continue to share any future travel adventures - it has become my electronic travel diary. I hope you enjoy and get inspired to visit some of the wonderful places we have visited.
View all posts by SUNGRL →
This entry was posted in Chiang Rai, Thailand and tagged boutiquehotelschianggrai, chiangrai, riverrai, riverrairesort. Bookmark the permalink.