They say that variety is the spice of life so we thought maybe a little zip lining was in order after all that golf!  We got talking to a couple at the hotel who had just spent the day out in the jungle so we decided to investigate our options.  There are a number of companies doing zip lining in Chiang Mai so after a bit of local research and knowledge we decided to go with Flight of the Gibbon.

The Flight of the Gibbon has two locations in Thailand – Chiang Mai and Pattaya as well as a location in Siem Reap in Cambodia.  The one closest to Chiang Mai is based in Mae Kampong which is a little village about an hour’s drive to the east of Chiang Mai.  There are 33 stations, some of which are suspended up to 70 metres above the valley floor. They also boast the longest zipline in Asia at 800 metres.  This might sound weird but the village reminded me of a Swiss village as we wound our way up into the jungle.  The houses were a similar shape to a Swiss chalet and they were all close to the road.  Obviously the foliage is very different as well as the temperature but it bought back many happy memories of our time in Switzerland. 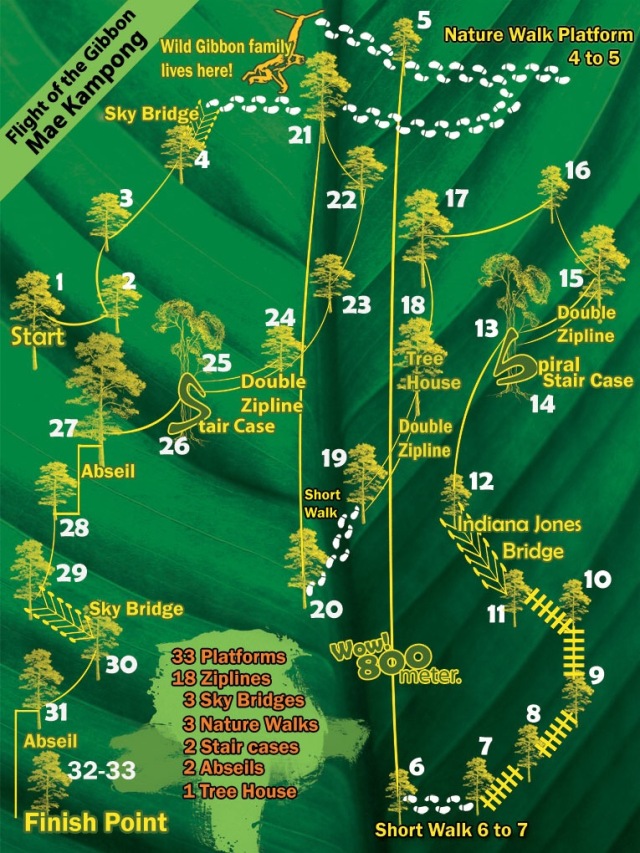 There were nine of us in our group and we had three Sky Rangers with us – Santi, Piak and Miss Lee.  Miss Lee was the Chinese translator for the six Chinese in our group although they could all speak pretty good English.  We have done zip lining before in Hawaii and in Queenstown but they were only three and six zip lines respectively so it was nice to spend three hours swinging through the rainforest like a Gibbon : )  It was also very cool in the rainforest – they say it is about ten degrees cooler than Chiang Mai city.  We also got to see four Gibbons – the male Gibbon was very curious swinging his way over to have a good look at us from atop the tree.  At the next station the female (lighter colour) was hanging out on the platform – they can bite but these ones have been tamed and are very used to human interaction.

Besides the zip lines they had swinging rope bridges and a couple of abseiling stations.  They also had a superman station where you were attached to the line from the middle of your back.  You could run off and fly – it was great fun.  At the other end of this one you had to grab hold of a rope wall and climb up to the next station.

At the end of the adventure we were driven back to HQ where we went to a local restaurant for lunch – the food was delicious.  We then took a short walk to a waterfall before it was time to head back to the city. 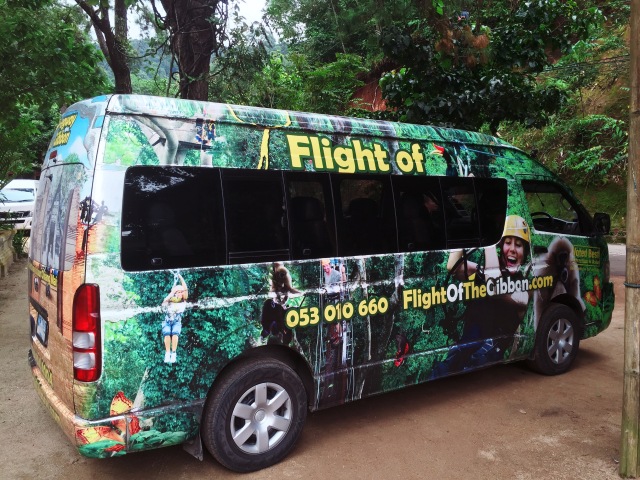 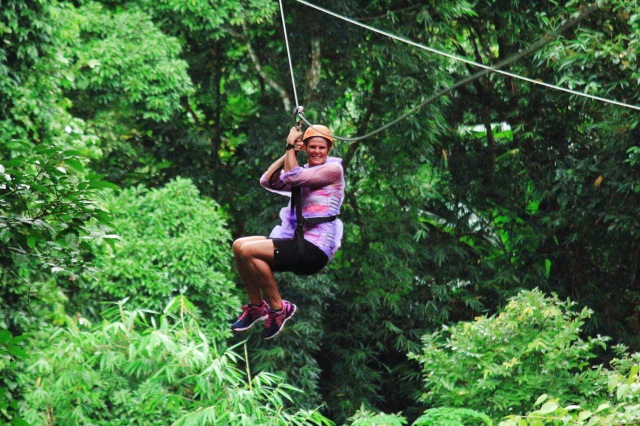 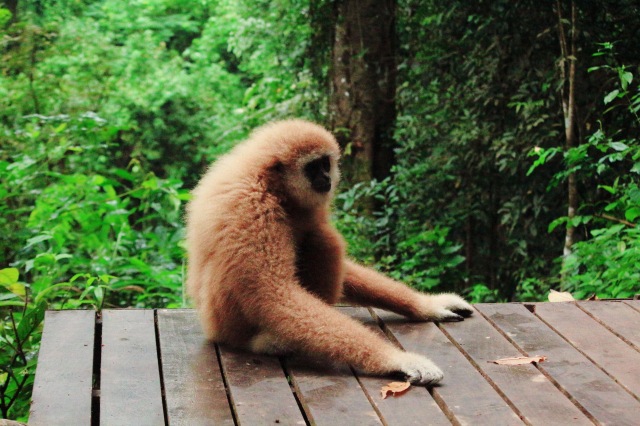 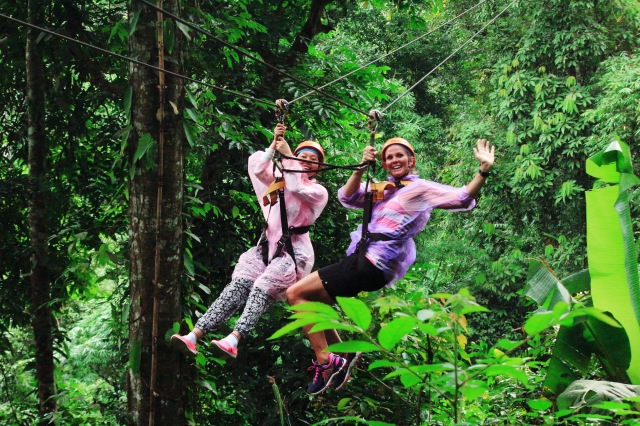 In 2007, a group of friends were enjoying one of their frequent rainforest walks in the mountains surrounding Chiang Mai when they came across a pair of Gibbons locked in a cage near a roadside. They had been abandoned to die a horrible death from starvation and dehydration. Shocked and outraged, the nature lovers immediately rescued this rare, endangered species, slowly nursing the pair back to health while they came up with a plan to create positive ecological change in our world…

Flight of the Gibbon was born and is now the leading global eco-adventure tour operator with their phenomenal rainforest zip-lines that are the longest, highest and fastest in the world. Now the number one tourist attraction in Thailand, Flight of the Gibbon invests 10% of their profits in primate re-habilitation, re-forestation projects and ecological education programs.

And what about the abandoned Gibbons? After their rescue, Tong Lorde (Golden Straw) and Tong Dee (Good Gold) were rehabilitated at a site that resembled their natural habitat. Having spent all of their lives in a cage, they needed to be taught how to look after themselves in the wild. Now they live alongside the zip-lines of Flight of the Gibbon with their baby sons, born free in the wild, where you can hear their calls, experience their natural environment and maybe even catch a glimpse of them swinging through the rainforest, just like you will with Flight of the Gibbon.

Apparently the Flight of the Gibbon zip line construction was overseen by expert engineers from NZ.  All the harness and safety equipment they use is manufactured in France and is of the highest quality.

It’s important to involve the local community in conservation efforts; so back in 2008 we worked with local villagers to start planting some trees in a deforested and over-used area near our ziplines. We also planted in a section of forest where primates were in competition with villagers for food sources. We started small and planted 2000 trees in the first year. We’ve picked up our pace since and have now helped plant more than 30,000 trees in those forests. We’ll be planting another 5,000 this year too!

Thailand introduced a ban on illegal logging back in 1989. Sadly, it’s been very much ignored and Thailand now has only 10-11% of its primary forests left! Flight of the Gibbon works hard to plant trees and to re-establish the biodiversity of the area we work in.

There are four Gibbons living in the forest near the village.  The two older gibbons, a female called Thong Lott and a male called Thong Dee, were reintroduced into the forests here in 2007. They’ve since had two children, a boy in 2011 and a girl in 2013.  Gibbons are from the Ape family rather than the Monkey family – they do not have tails like Monkey’s do.

Our gibbons are white-handed gibbons. It won’t surprise you to learn that this is because they have white hairs on their hands. The white-handed gibbon is a threatened species. What that means is that they are still found in the wild, unlike some species which only exist in protected captive environments, but their population is so small that they are under the real threat of extinction.
There are only around 80,000 white-handed gibbons left in the world! Which might sound like a lot but if you think about the fact that there are 67 million people in Thailand alone… it’s not as many as it sounds.

Gibbons are losing their homes and the species is in gradual decline. They are hunted for their meat and to be enslaved to be sold as pets in other locations. They also have a low birth rate. They’re a bit like human beings in that respect. Most mating pairs will only have one child every few years. This presents certain challenges when it comes to re-populating the species in areas where they are reintroduced.

The loss of Thailand’s forests is creating a huge loss of habitat for many species in Thailand. The country has only got 10-11% of its primary forest remaining and sadly, despite it being illegal, logging continues without much in the way of interruption.

Traditionally, hill-tribes and farmers burn their fields in Northern Thailand during the winter through to early-summer and this helps prepare those fields for new crops. Sadly, they are also burning down forests at the same time to increase their lands.
Gibbon Hunting

If you’re at all squeamish, you might want to skip this next paragraph or two. The way gibbons are caught in the wild is particularly inhumane. The mother is shot dead and this brings baby gibbons to ground to try and find out what has happened to their parent. They are then captured and forced into tiny, cramped and completely inadequate cages.

It’s estimated that nearly half the gibbons caught like this will die as they are transported to market to be sold. Yet more gibbons will perish at the markets due to the conditions and their misery at their deceased parent. If they survive, they can look forward to a horrible life as a pet.

Most people, who keep gibbons, don’t know how to keep them properly. They feed them a diet that isn’t in keeping with their natural habitat. When the gibbon finally reaches maturity, at the age of 6, it can become aggressive. This leads to owners have the gibbons destroyed out of fear for their own safety.

The first pair of gibbons, reintroduced to the forests around Mae Kampong, has thrived. We hope to be able to make more of a difference soon. We are looking to find more mating pairs of gibbons to reintroduce to the jungle.

This is not an easy process. Gibbons need a lot of careful rehabilitation if they are to survive the change from captivity to living in the wild. They can only be reintroduced if they exhibit certain signs during the rehabilitation process.

The process requires an enclosure which gives the gibbon some exposure to their new environment while also protecting them from it. If the gibbon moves round that enclosure well, spends most of its time at the top of the enclosure, shows a strong bond with their chosen mate (copulating, grooming, playing etc.) and doesn’t show any behavioural signs of distress – only then can it move into the wild.

It is vital to the gibbons’ well-being that they are released as a fully bonded mating pair. This is so that they can be completely independent of human beings. Strangely, it is also important that the gibbons show no signs of dependence on the humans that care for them during the rehabilitation process. That can be dangerous for both the people and the gibbons. Gibbons, as they mature, can become aggressive towards those people. It’s also important that the gibbons don’t see people as friends, so that they can keep as far away from poachers as possible in the wild.

Finally, we have to find just the right area for gibbons to be released. It has to have enough food supply so that the gibbons can forage and find enough to eat. It also has to be at some distance from the habitats of any other gibbons. That’s because they are a territorial species. They sing in the mornings when they awake. That’s to ward off other gibbons from their homes.

If we introduce gibbons too close to another group of gibbons – they may attack each other. That could be fatal for one or both groups of gibbons.

This blog was originally set up to share our 9 month adventure around Europe and the USA with friends and family in 2014. On returning to NZ in January 2015 I decided to carry it on so I could continue to share any future travel adventures - it has become my electronic travel diary. I hope you enjoy and get inspired to visit some of the wonderful places we have visited.
View all posts by SUNGRL →
This entry was posted in Chiang Mai, Thailand and tagged chiangmai, flightofthegibbon, ziplining. Bookmark the permalink.