On Monday we arrived on the butterfly shaped island of Guadeloupe. Guadeloupe is another island in the French West Indies which comprises Martinique, Saint Marten’s and Saint Bart’s. Guadeloupe’s two main islands are Basse-Terre to the west and Grande-Terre to the east, which are separated by a narrow strait that is crossed with bridges, hence forming the butterfly shape. Guadeloupe is an integral part of France, as are the other overseas departments. Guadeloupe also includes the smaller islands of Marie-Galante and La Désirade, and the Îles des Saintes. 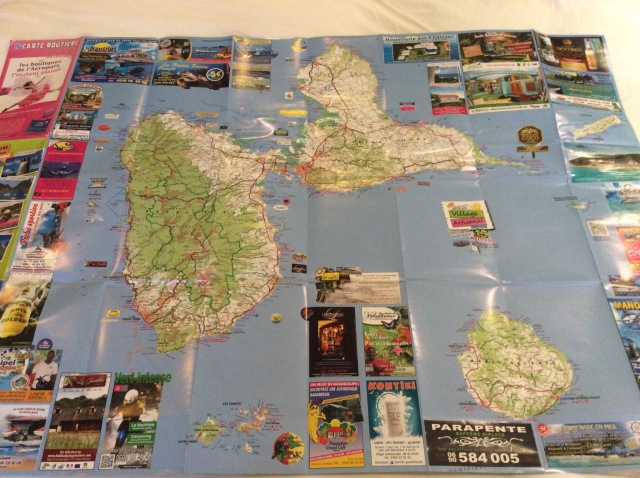 As part of France, Guadeloupe is part of the European Union and the Eurozone; hence, as for all Eurozone countries, its currency is the euro. However, as an overseas department, Guadeloupe is not part of the Schengen Area. The prefecture (i.e. French regional capital) of Guadeloupe is Basse-Terre. Its official language is French, although many of its inhabitants also speak Antillean Creole (Créole Guadeloupéen).

We took a half day trip to discover some of the island. Our first stop was in the Parc National de la Guadeloupe where we walked to the Crayfish falls which are named after the crayfish that inhabit the pond at the base of the waters of the Corossol River. Again we were greeted with very lush vegetation. It rains in the mountains most days so water is not a problem on the island. 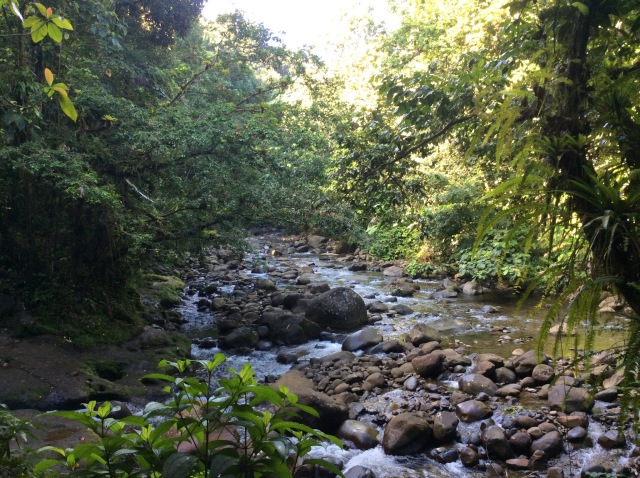 We then went to Les Jardins de Valombruese some botanical gardens with many local plants and flowers. We also saw some hummingbirds playing in the trees and extracting the nectar from the flowers. Our guide, Romeo was very knowledgable on the flora and fauna so we really enjoyed exploring the gardens. We also went into a little room where they had a display of dolls dressed in traditional clothing. The different outfits represented the area and class from which you came. 71% of the island’s population are of Creole descent which means they are descendants of the various ethnic groups that have come to the Caribbean islands over the years. In a way it is a cover all term which allows these people to have an identity. 80% of the population are Roman Catholics. 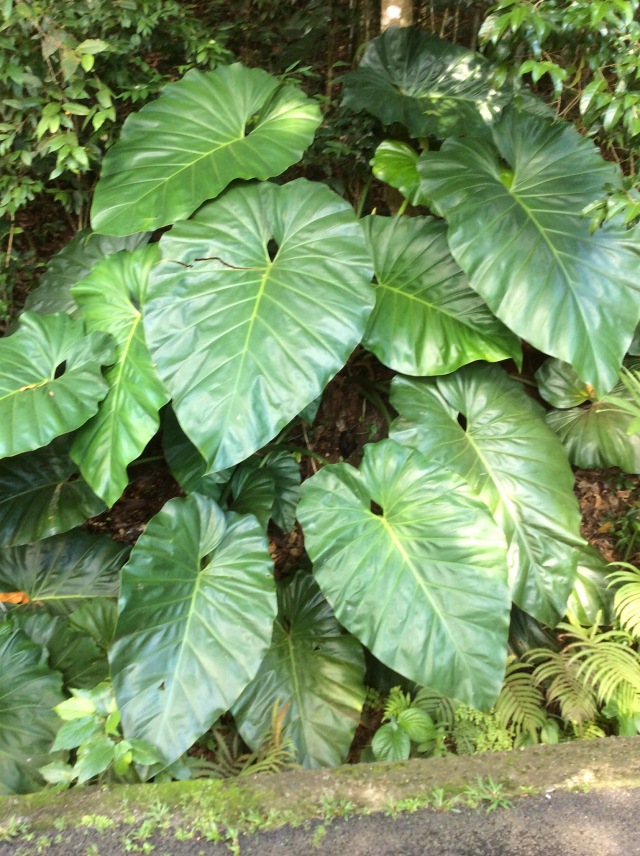 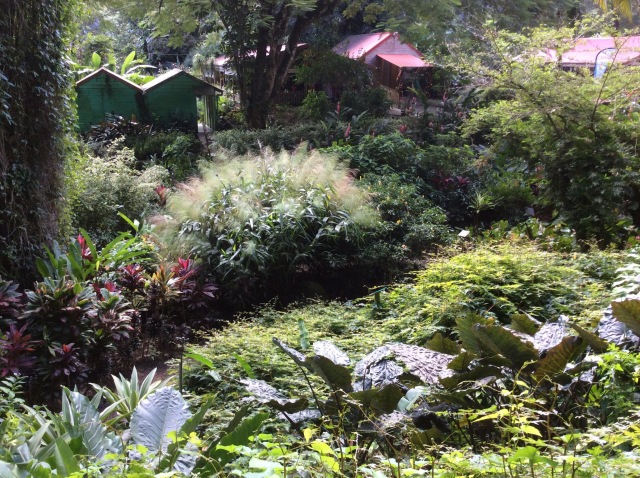 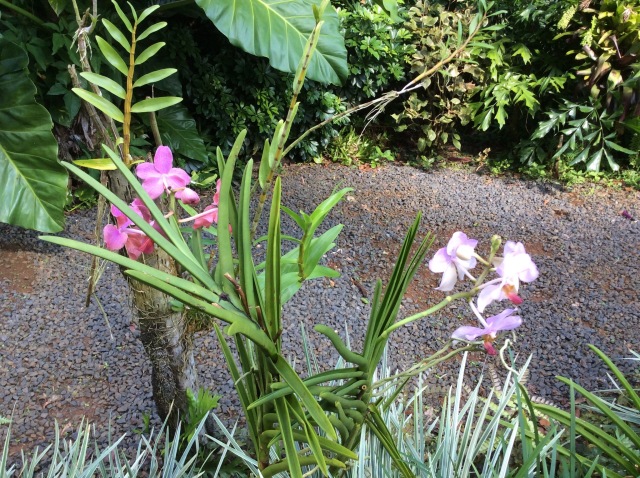 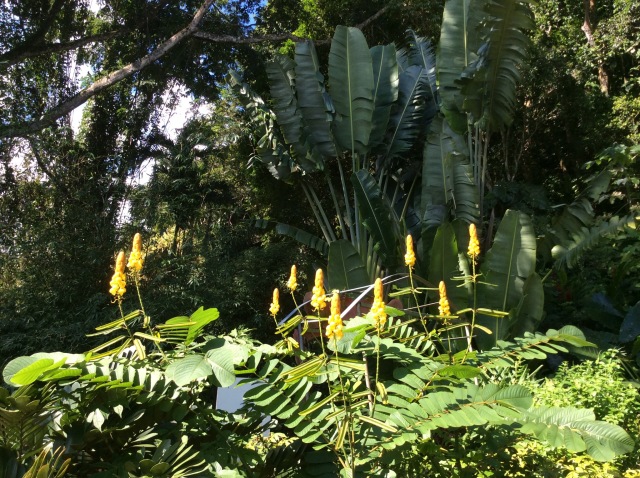 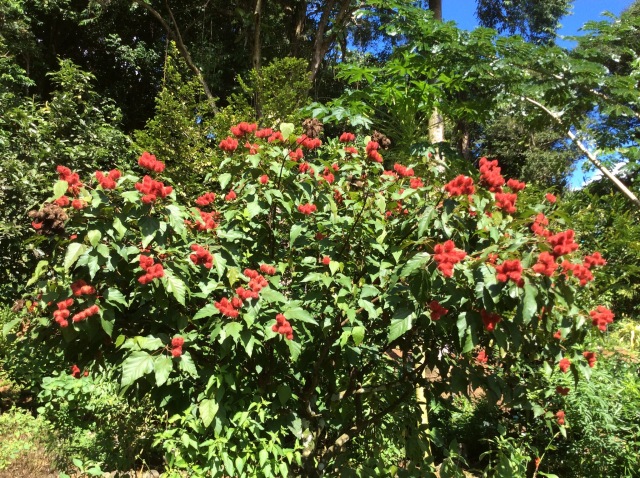 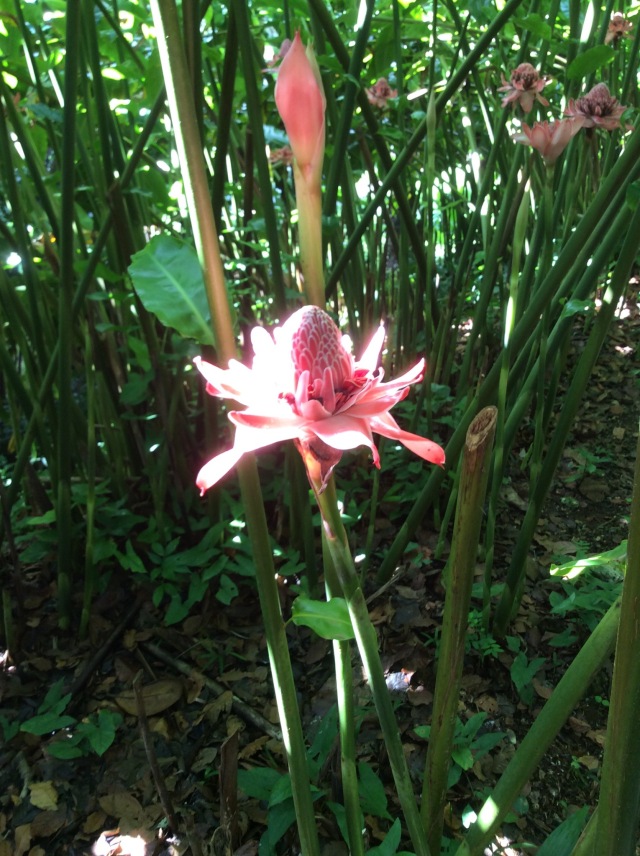 We then went to Distillerie Longueteau which is a family owned rum distillery. Here they use modern equipment to harvest the sugar cane and produce the rum which was in stark contrast to the distillery we had been to on Grenada. This distillery had been in operation since 1895. The sugar cane harvest season is from February to May. I tried some coconut rum punch which I enjoyed so purchased a little bottle along with some locally produced chocolate. There were so many other goodies that I would have liked to purchase but again would have trouble bringing back to NZ like vanilla pods, vanilla sugar and honey. 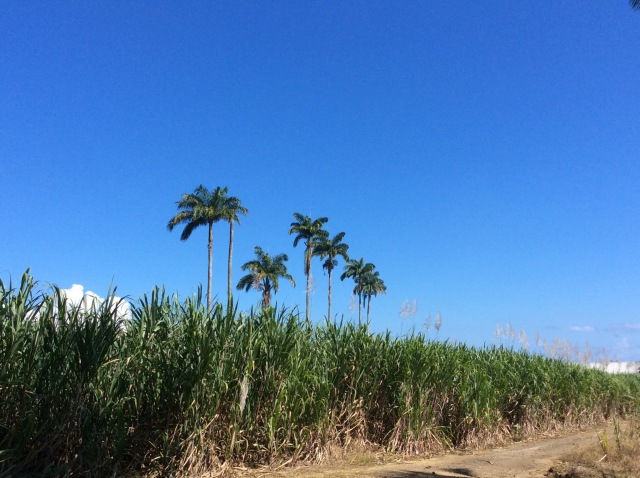 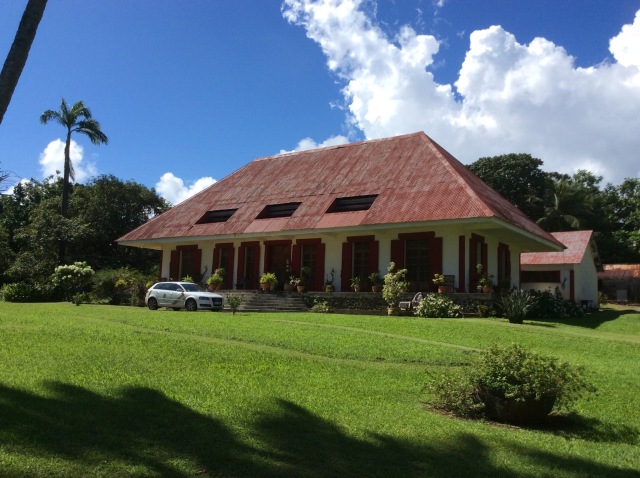 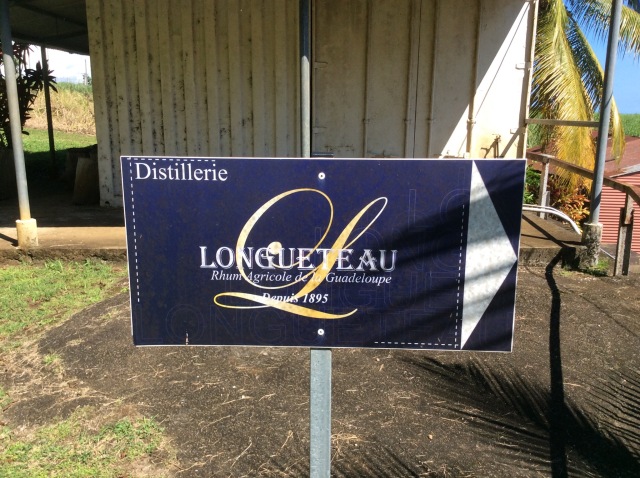 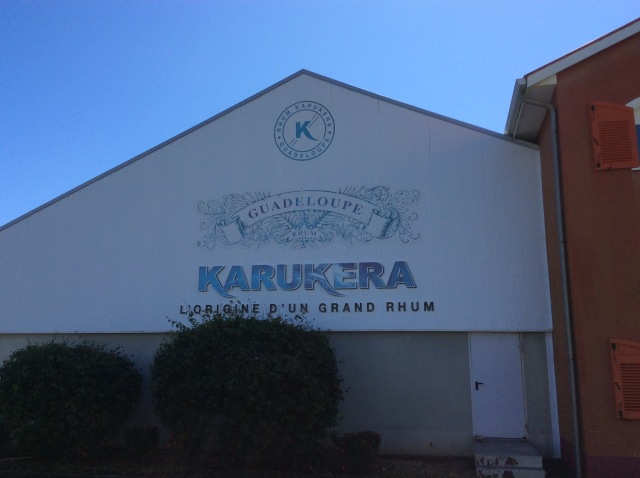 Sugar
Introduced to the West Indies in the middle of the 17th century, sugar cane growing is inextricably linked to the islands’ history and has profoundly shaped its landscape. After a peak in the middle of the 20th century, the sugar industry went into a long period of decline. Save for one, all the factories on the main island of Guadeloupe closed one after the other.

Despite its decline, sugar cane remains the island’s main agricultural crop both in terms of value and farmed area, providing a living for almost 30,000 people, including 4,000 growers. Today, the sugar cane plot is stable at around 12,000 hectares, with the 700,000 tonnes of cane cut producing some 70,000 tonnes of sugar. Another 60,000 tonnes are delivered to the eleven distilleries on the island producing industrial rum and rhum agricole.

More than 90% of the sugar produced is marked for export. Most of it is sent by bulk cargo ship to refineries in Europe. The remainder, special sugars, is packed in big bags and shipped to the EU in 20’ containers. Sugar cane processing is an almost virtuous activity that produces much more than just sugar and rum. Bagasse and molasses, by-products from the sugar refining process, are used in power production and as animal feed respectively.

Sugarcane belongs to the grass family (Poaceae), an economically important seed plant family that includes maize, wheat, rice, and sorghum and many forage crops. Sugarcane is the world’s largest crop by production quantity.

Over the last 30 years bananas have reached 50% of the island’s exports with over 80% of all bananas being exported to Europe.

History of Guadeloupe
The island was called “Karukera” (or “The Island of Beautiful Waters”) by the Arawak people, who settled on there in 300 AD/CE. During the 8th century, the Caribs came and killed the existing population of Amerindians on the island.

During his second trip to America, in November 1493, Christopher Columbus became the first European to land on Guadeloupe, while seeking fresh water. He called it Santa María de Guadalupe de Extremadura, after the image of the Virgin Mary venerated at the Spanish monastery of Villuercas, in Guadalupe, Extremadura. The expedition set ashore just south of Capesterre, but left no settlers behind.

Columbus is credited with discovering the pineapple on the island of Guadeloupe in 1493, although the fruit had long been grown in South America. He called it piña de Indias, meaning “pine of the Indies.”

During the 17th century, the Caribs fought against the Spanish settlers and repelled them.

After successful settlement on the island of St. Christophe (St. Kitts), the French Company of the American Islands delegated Charles Lienard (Liénard de L’Olive) and Jean Duplessis Ossonville, Lord of Ossonville to colonize one or any of the region’s islands, Guadeloupe, Martinique, or Dominica.

Due to Martinique’s inhospitable nature, the duo resolved to settle in Guadeloupe in 1635, took possession of the island, and wiped out many of the Carib Amerindians. It was annexed to the kingdom of France in 1674.

Over the next century, the British seized the island several times. The economy benefited from the lucrative sugar trade, which commenced during the closing decades of the 17th century. Guadeloupe produced more sugar than all the British islands combined, worth about £6 million a year. The British captured the island in 1759. The British government decided that Canada was strategically more important and kept Canada while returning Guadeloupe to France in the Treaty of Paris (1763) that ended the Seven Years War.

In 1790, following the outbreak of the French Revolution, the monarchists of Guadeloupe refused to obey the new laws of equal rights for the free people of color and attempted to declare independence. The ensuing conflict with the republicans, who were faithful to revolutionary France, caused a fire to break out in Pointe-à-Pitre that devastated a third of the town. The monarchists ultimately overcame the republicans and declared independence in 1791. The monarchists then refused to receive the new governor that Paris had appointed in 1792. In 1793, a slave rebellion broke out, which made the upper classes turn to the British and ask them to occupy the island.

In an effort to take advantage of the chaos ensuing from the French Revolution, Britain seized Guadeloupe in 1794, holding control from 21 April until December 1794, when Victor Hugues obliged the British general to surrender. Hugues succeeded in freeing the slaves, who then turned on the slave owners who controlled the sugar plantations.

In 1802, Napoleon Bonaparte issued the Law of 20 May 1802. It restored slavery to all of the colonies captured by the British during the French Revolutionary Wars, but did not apply to certain French overseas possessions such as Guadeloupe, Guyane, and Saint-Domingue. Napoleon sent an expeditionary force to recapture the island from the rebellious slaves. Louis Delgrès and a group of revolutionary soldiers killed themselves on the slopes of the Matouba volcano when it became obvious that the invading troops would take control of the island. The occupation force killed approximately 10,000 Guadeloupeans.

On 4 February 1810 the British once again seized the island and continued to occupy it until 1816. By the Anglo-Swedish alliance of 3 March 1813, it was ceded to Sweden for a brief period of 15 months. However, the British administration continued in place and British governors continued to govern the island.

In the Treaty of Paris of 1814, Sweden ceded Guadeloupe once more to France. An ensuing settlement between Sweden and the British gave rise to the Guadeloupe Fund. The Treaty of Vienna in 1815 definitively acknowledged French control of Guadeloupe.

Slavery was abolished on the island on 28 May 1848 at the initiative of Victor Schoelcher.

In 1925, after the trial of Henry Sidambarom (Justice of the Peace and defender of the cause of Indian workers), Raymond Poincaré decided to grant French nationality and the right to vote to Indian citizens.

In 1946, the colony of Guadeloupe became an overseas department of France. Then in 1974, it became an administrative center. Its deputies sit in the French National Assembly in Paris.

Today, the population of Guadeloupe is mainly of African or mixed descent and largely Roman Catholic, speaking French and a Creole patois (Antillean Creole). There are also Europeans, Indians, Lebanese, Syrians, Chinese, and Carib Amerindians(remnants of the original pre-European population). The archipelago of Îles des Saintes is mostly populated by the descendants of colonists from Brittany and Normandy.

On 15 July 2007, the island communes of Saint-Martin and Saint-Barthélemy were officially detached from Guadeloupe and became two separate French overseas collectivities with their own local administration.

On 20 January 2009, an umbrella group of approximately fifty labour union and other associations (known in the local Antillean Creole as the Liyannaj Kont Pwofitasyon (LKP), led by Élie Domota) called for a €200 ($260 USD) monthly pay increase for the island’s low income workers. The protesters have proposed that authorities “lower business taxes as a top up to company finances” to pay for the €200 pay raises. Employers and business leaders in Guadeloupe have said that they cannot afford the salary increase. The strike lasted 44 days, ending with an accord reached on 5 March 2009. Tourism suffered greatly during this time and affected the 2010 tourist season as well.

The French Caribbean general strikes exposed deep ethnic, racial, and class tensions and disparities within Guadeloupe. Guadeloupe has an unemployment rate of approximately 30%. The urban and industrial areas resemble that of any French city with car and machinery dealerships, supermarkets and chain stores. It appeared a more sophisticated island than some of the other islands that we had visited.