Today we took a drive to Ronda which is situated in a very mountainous area about 750m above sea level. We decided to take the scenic route through the mountains. We turned off the highway just before our normal EU2.00 toll checkpoint that we go through on the way to Marbella. Just because you hop off the highway doesn’t mean you avoid the toll – they have a toll booth just off the highway too. The toll here was only EU0.95 – bargain. It is a bit of a joke re the tolls as Steve is never happy when he sees the toll booth looming in the distance. The highways in Spain are very good so the money has been well spent.

As we headed into the mountains we understood why the toll was only EU0.95 – the road was so bumpy. It was tar sealed but hasn’t been maintained that well so there are dips and hollows all over the show. Luckily it was only like this for the first 24km and once we passed the mountain village of Gaucin the roads were very good.

There are these mountain villages dotted along the way as well as the odd house here are there. We wondered what all the people that lived there did for a living – the land is very mountainous and scrub like. There were a few olive plantations and we saw a sign for a lime plantation but as a percentage we didn’t see a lot of productive land. 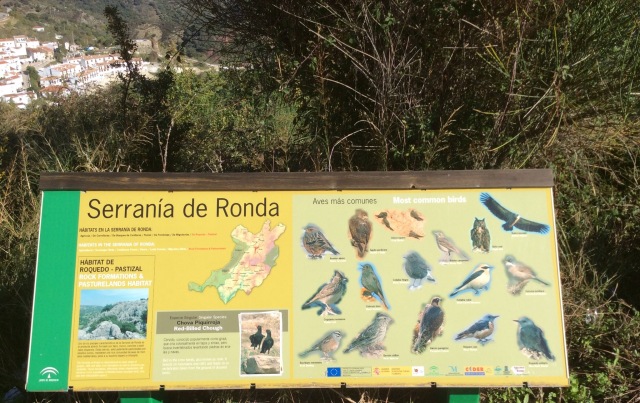 It took us about an hour and a half to get to Ronda – it was a perfect blue sky day again so the contrast between the sky and the mountains was spectacular. Ronda has a population of about 35,000 so it was reasonably busy when we got there – the roads are narrow and there is not a lot of parking. We followed our nose through town and spotted a car coming out of a parking area so we nabbed it quick smart. Steve said we better take good note of where we’re parked so we find the car again. It turned out that this parking lot was just up from the main shopping street and next to the Police and Guardia Civil.

We wandered down the main shopping street which became pedestrian only after a while. We were quite surprised at the number and quality of the shops – it was great. I even managed to replace my running shoes, albeit I had to go with men’s version rather than the women’s. At half the price that I pay in NZ I am not complaining.

The Guadalevín River runs through the city, dividing it in two and carving out the steep, 100 plus meters deep El Tajo canyon upon which the city perches. The Spanish Fir (Abies pinsapo) is endemic to the mountains surrounding Ronda.

Three bridges, Puente Romano (“Roman Bridge”, also known as the Puente San Miguel), Puente Viejo (“Old Bridge”, also known as the Puente Árabe or “Arab Bridge”) and Puente Nuevo (“New Bridge”), span the canyon. The term “nuevo” is a bit of a misnomer, as the building of this bridge commenced in 1751 and took until 1793 to complete. The Puente Nuevo is the tallest of the bridges, towering 120 metres (390 ft) above the canyon floor, and all three serve as some of the city’s most impressive features.

Hemingway’s novel For Whom the Bell Tolls describes the execution of Nationalist sympathizers early in the Spanish Civil War. The Republicans murder the Nationalists by throwing them from cliffs in an Andalusian village, and Hemingway allegedly based the account on killings that took place in Ronda at the cliffs of El Tajo. 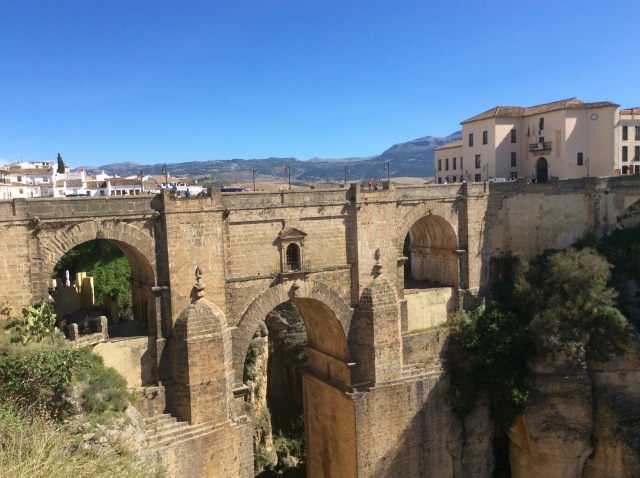 We did a self guided tour of the Plaza de toros de Ronda, the oldest bullfighting ring in Spain. It was built in 1784 in the Neoclassical style by the architect José Martin de Aldehuela, who also designed the Puente Nuevo.

The Plaza de Toros (bullring) in Ronda occupies a very special place in modern Spanish culture and history as the home of the Rondeño style of bullfighting and also of the Real Maestranza De Caballería De Ronda. The bullring was built entirely of stone in the 18th century, during the golden years of Pedro Romero’s reign as champion bullfighter.

Home to the Real Maestranza de Caballería de Ronda, Spain’s oldest and most noble order of horsemanship, an order that traces its heritage back to 1485, and the year the Catholic Monarchs Ferdinand and Isabella defeated the Moors in Ronda, thus bringing the city back under Christian rule after 773 years of Islamic rule.

The bullring in Sevilla is considered older having commenced construction in 1761, and was completed in 1785, compared to Ronda’s commencement in 1779 and completion in 1784, though purists agree Ronda’s bullring should be entitled to the crown since it was first to stage a corrida. However, in May of 1784 during the first inaugural corrida to be held in Ronda’s Plaza de Toros, part of the stand collapsed forcing its closure until repairs could be made.

The second inaugural corrida occurred on May 19th 1785 and featured Pedro Romero and his greatest rival in the ring Pepe Hillo, by all accounts a day to be remembered in Ronda as one of bullfightings greatest moments. All of Ronda’s most noble families were in attendance, and the town was bedecked in flags while in the streets a great party was going on.

Ronda’s bullring, whilst perhaps not the oldest in Spain is definitely the oldest bullring constructed entirely of stone, most others being constructed with a combination of stone and brick. Ronda’s bullring, designed by José Martín de Aldehuela is unique in having all of the seating under cover. The stands were constructed in two levels of seating of 5 raised rows per level and 136 Tuscan sandstone columns forming 68 arches provide support for the top level of seating and the roof of the Plaza de Toros.

After checking out the bullring we visited the museum, the Museo Taurino, which contains many of the most important outfits and bullfighting regalia from the last two centuries, as well as an extensive collection of weapons used by the Real Maestranza during Spain’s many wars.

It was interesting seeing all the behind the scenes pens etc… Steve said he would quite like to see a bull fight but I am not so sure. Although a blood sport, by definition, some followers of the spectacle prefer to view it as a ‘fine art’ and not a sport, as there are no elements of competition in the proceedings. In Portugal, it is illegal to kill a bull in the arena, so it is removed and either professionally killed or treated and released into its owners’ (ganadero) fields. 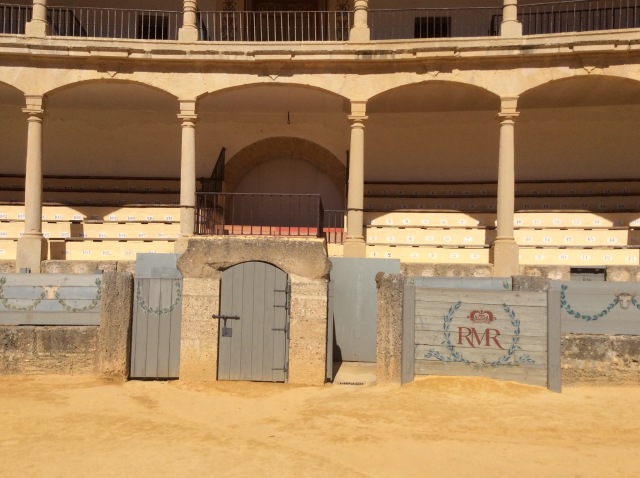 After our tour of the bullring we wandered back into town for some lunch. It was 2pm so all the shops (except restaurants) were closing for siesta. This tradition is still alive and well with most shops shutting for 2 to 3 hours. It was amazing how quickly the street cleared out.

After lunch we drove back to Sotogrande – along the way we saw a traffic jam, Spanish style : ) 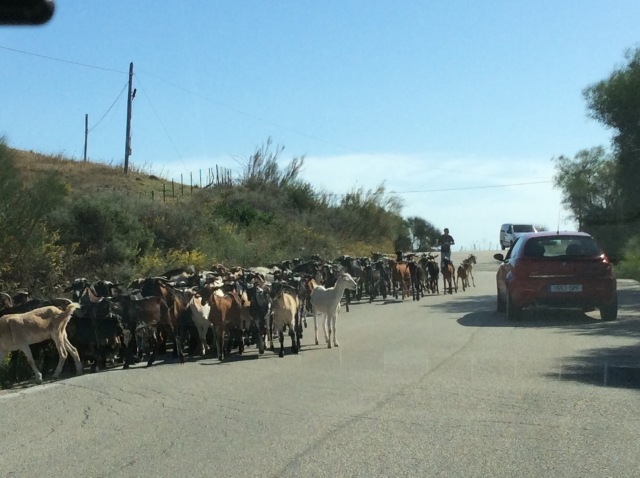