Our tour guide on the boat yesterday suggested walking over the Brooklyn Bridge (Steve probably could have killed him at this point ) so today we, we being the royal we decided to do that first up. It is like a pedestrian highway but very enjoyable. The walkway actually sits above the cars in the middle of the bridge so you get good views of Manhattan, Brooklyn and the Manhattan Bridge. It only takes about 30 minutes to walk across the bridge.

The Brooklyn Bridge is a hybrid cable-stayed/suspension bridge in New York City and is one of the oldest bridges of either type in the United States. Completed in 1883, it connects the boroughs of Manhattan and Brooklyn by spanning the East River. It has a main span of 1,595.5 feet (486.3 m), and was the first steel-wire suspension bridge constructed.

While conducting surveys for the bridge project, Roebling sustained a crush injury to his foot when a ferry pinned it against a piling. After amputation of his crushed toes he developed a tetanus infection which left him incapacitated and soon resulted in his death, not long after he had placed his 32-year-old son Washington Roebling in charge of the project. Washington Roebling also suffered a paralyzing injury as a result of decompression sickness shortly after the beginning of construction on January 3, 1870. This condition, first called “caisson disease” by the project physician Andrew Smith, afflicted many of the workers working within the caissons. Roebling’s debilitating condition left him unable to physically supervise the construction firsthand.

In geotechnical engineering, a caisson is a watertight retaining structure used, for example, to work on the foundations of a bridge pier, for the construction of a concrete dam, or for the repair of ships. These are constructed such that the water can be pumped out, keeping the working environment dry.

Roebling conducted the entire construction from his apartment with a view of the work, designing and redesigning caissons and other equipment. He was aided by his wife Emily Warren Roebling who provided the critical written link between her husband and the engineers on site. Under her husband’s guidance, Emily studied higher mathematics, the calculations of catenary curves, the strengths of materials, bridge specifications, and the intricacies of cable construction. She spent the next 11 years assisting Washington Roebling, helping to supervise the bridge’s construction. There is a memorial plaque for Emily on the bridge.

After a quick stop in Brooklyn it was back on the subway, destination The Meatpacking District. Two markets started operating in this area in the 1880’s on the old freight yards, the Gansevoort Market (originally the “Farmer’s Market”), an open-air space for the buying and selling of regional produce started in 1879, and the West Washington Market, 10 brick buildings used for meat, poultry and dairy transactions, relocated to the river side of West Street in 1884. By 1900, the area was home to 250 slaughterhouses and packing plants, and by the 1920s, what had been a neighborhood based on mixture of marketplaces became more tightly focused on meatpacking and related activities – although other industries continued to be located there.

The area’s decline began around the 1960s, as part of the general decline of the waterfront area. Containerization of freight, the advent of supermarkets which changed the distribution pattern for meat, dairy and produce from a locally or regionally based system to a more national one, the development of frozen foods and refrigerated trucks to deliver them, were all factors, but meatpacking continued to be the major activity in the neighborhood through the 1970s. At the same time a new “industry”, nightclubs and other entertainment and leisure operations catering to a gay clientele began to spring up in the area.

Although we are hipsters that wasn’t the reason for our visit. We were there to walk the High Line – as you can imagine all this walking was making Stevie a very happy boy : )

The High Line (also known as the High Line Park) is a 1.45-mile-long (2.33 km) New York City linear park built on a section of a disused New York Central Railroad spur called the West Side Line. Inspired by the 3-mile (4.8-kilometer) Promenade plantée, a similar project in Paris completed in 1993, the High Line has been redesigned and planted as an aerial greenway and rails-to-trails park.

Repurposing of the railway into an urban park began construction in 2006, with the first phase opening in 2009 and the second phase opening in 2011. The third and final phase officially opened to the public September 21, 2014, except for a short stub above Tenth Avenue and 30th Street, which opens in 2015. The project has spurred real estate development in the neighborhoods which lie along the line. The park is extremely popular; as of September 2014, the park gets nearly 5 million visitors annually.

It was very cool and because you were elevated you got a good view of the disused warehouses below, apartment backyards, the Hudson River and the massive construction of apartment blocks that is going on. You could imagine the meatpacking industry in days gone by. Thanks Victoria Carter for the heads up about this innovative place to visit. An added bonus is that it is completely free for all to enjoy. 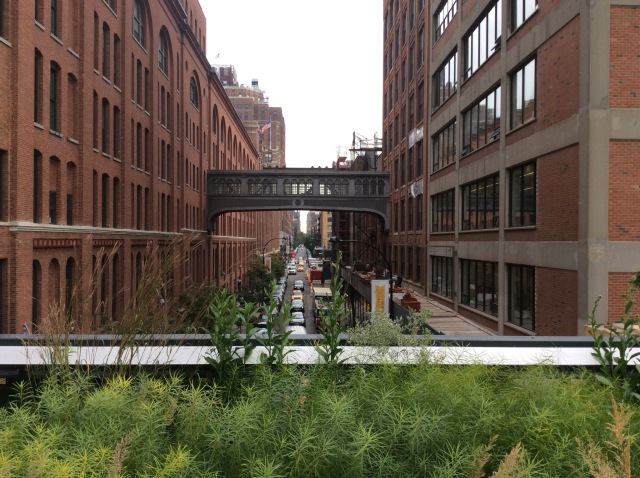 Last but not least on our agenda for the day was Times Square. Times Square is a major commercial intersection and a neighborhood in Midtown Manhattan, at the junction of Broadway (now converted into a pedestrian plaza) and Seventh Avenue and stretching from West 42nd to West 47th Streets. Brightly adorned with billboards and advertisements, Times Square – iconified as “The Crossroads of the World”, “The Center of the Universe”, and “The Great White Way” – is the hub of the Broadway Theater District, one of the world’s busiest pedestrian intersections, and a major center of the world’s entertainment industry. Times Square is one of the world’s most visited tourist attractions, hosting over 39 million visitors annually. Approximately 330,000 people pass through Times Square daily, many of whom are either tourists or people working in the area.

We can vouch for the 330,000 people – the place is madness – people and flashing lights everywhere! It was a must see though and we were there just in time to see the NASDAQ close on the big screen. The NASDAQ Stock Market, commonly known as the NASDAQ, is an American stock exchange. In terms of market share and volume traded, it is the largest stock exchange in the U.S. They have this televised closing bell ceremony everyday where special guests are invited to ring the closing bell. Only in America : )

New York is a crazy city but well worth visiting. There are so many sights and sounds and unfortunately we didn’t get round them all this time but got a good feel for the geography. We both decided that we will definitely return again in the future to finish off where we left off.

This blog was originally set up to share our 9 month adventure around Europe and the USA with friends and family in 2014. On returning to NZ in January 2015 I decided to carry it on so I could continue to share any future travel adventures - it has become my electronic travel diary. I hope you enjoy and get inspired to visit some of the wonderful places we have visited.
View all posts by SUNGRL →
This entry was posted in New York, USA. Bookmark the permalink.