The plan was to dock at the port in Rhodes at 8am this morning but the winds had got up to 35 knots making it too difficult to do so. The Captain (Inger Klein Thorhauge from Denmark) made an announcement that the attempt to dock had been aborted but they would make a second attempt. The high winds also thwarted the second attempt so we “circling” in the bay while the powers that be decided on the next course of action.

At about 9am the Captain was back online saying that the winds didn’t look like they were going to drop so they had decided on an alternative port – Marmaris in Turkey. Rhodes which is in Greece is actually closer to Turkey than it is to Greece being only 11 nautical miles off the Turkish Coast. I was a bit disappointed as we hadn’t been to Rhodes before and was looking forward to checking it out as well as having another fix of greek yoghurt and honey. I was also very interested in going to the Temple of Apollo – Apollo being the sun god. I hope this won’t have any bearing on my sun powers going forward : )

We wouldn’t be docking at Marmaris until 12pm so we decided to watch the replay of the Rafa Nadal v Nick Kyrgios match – it was a great match with the young Australian, Nick Kyrgios defeating Rafa in 4 sets. As I write this we are watching his live quarter final match against the Canadian Raonic – it is another good game although the Aussie is showing his youth and inexperience at times.

Anyway we had been to Marmaris before for a night and my memories of the place were that it was filled with all these replica English pubs and sunburnt, beer swilling English tourists. We went ashore to see if our memories were serving us right and we were pleasantly surprised that there was more to Marmaris than what we had previously experienced. The port area is lovely and we walked along the marina to the town area. There are a lot of bars along the way catering for the English but the replica ones I remembered were in the middle of town away from the water.

It was 31 degrees and fair sweltering – just quietly the SUNGRL was beginning to fade. We walked all along the waterfront and settled in a bar so Steve could be reunited with his beloved Efes beer and I could cool down. The Turkish guys running the bar were friendly and Steve couldn’t help impart some gems re how they could improve their business and get more punters in. We had a spot of lunch and re connected with the world via wifi.

We then reversed our journey along the waterfront in the sweltering heat to return to the boat but not before another reunion with the mighty Efes in a bar at the marina. When we returned to the ship we noticed a yacht in the marina with a silver fern flag and on closer inspection noted that it was registered in Wanaka.

After dinner tonight we went on deck as we sailed away from Marmaris – it is a lovely part of Turkey where the hills run into the sea and with the sun setting behind them made for an even better spectacle.

The town of Marmaris is located at the meeting place of the Aegean and Mediterranean seas, surrounded by pine clad hills. Situated in Southwest Turkey, in the province of Mulga, Marmaris is one of Turkey’s biggest tourist resorts. The population rises from 75,000 in winter to around 300,000 in summer.

The Ottoman Sultan at the time, Kanuni Sultan Suleyman, changed the name of the town to Mimaras, which then became Marmaris according to the historian Evlija Celebi. A local rumour has it that the reason for the change of name to Mimaras was that Suleyman, on returning from his expedition to Rhodes, disliked the castle and exclaimed “mimar as!” which means “hang the architect!” Unfortunately there is no evidence to support this amusing story.

Rhodes – what we missed : (
The island of Rhodes, once sacred to the sun god Apollo, is the largest in the group known as the Dodecanese (Twelve Islands) off the south west coats of Turkey. Well wooded, mountainous and scenically beautiful inland, Rhodes offers the contrast of rich agriculture in its coastal plains. Of the major islands in the Dodecanese, Rhodes is the most developed and is hugely popular with British and Scandinavian visitors alike. Other well known islands in the group are Kos, home of Hippocrates and the lettuce, and Patmos, where St John wrote the Book of Revelation.

The Romans ruled Rhodes in the 5th Century B.C. and during their rule Rhodes became a household name in the academic world; Athens and Rhodes were the Oxford and Cambridge of their day where rich young Romans, Julius Caesar amongst them, came to learn the art of public speaking. When Rome fell, Rhodes became part of the Byzantine empire ruled from Constantinople, but her great days were over and she fell continual prey to Saracen pirates.

In 1948, Rhodes together with the rest of the twelve islands, was united with Greece. 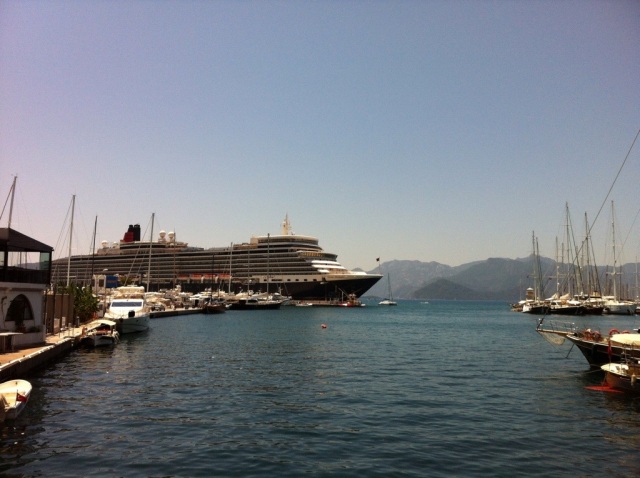 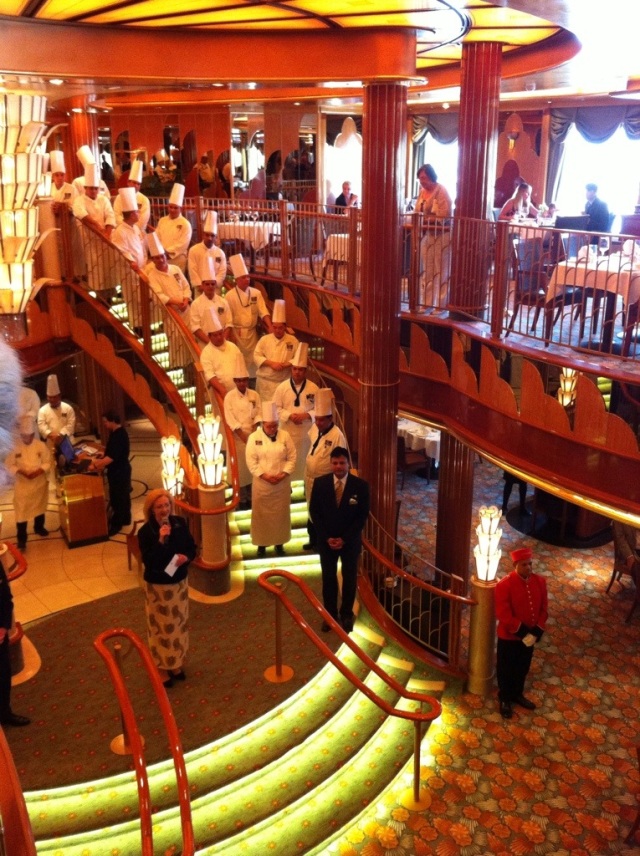 This blog was originally set up to share our 9 month adventure around Europe and the USA with friends and family in 2014. On returning to NZ in January 2015 I decided to carry it on so I could continue to share any future travel adventures - it has become my electronic travel diary. I hope you enjoy and get inspired to visit some of the wonderful places we have visited.
View all posts by SUNGRL →
This entry was posted in Cunard Line. Bookmark the permalink.