We were London bound and the fact that London was experiencing a hot summer was encouraging as we left behind the heat of Thailand.

We flew into Gatwick at 7.25am on Friday the 13th of July and our friend Denise was there to meet us. After a little disorientation at the airport we found the carpark where she had parked the car and we set off for Shenfield which is in East London.

The girls enjoyed a relaxing day in the garden while the boys headed out for a game at Thorndon Park Golf Club where Gary is a member. It had been three and a half years since we last saw Denise and Gary in NZ so it was great catching up.

On Saturday we did a 16km walk around the countryside and back into Shenfield where we had lunch which was the highlight of the walk for Steve : ) 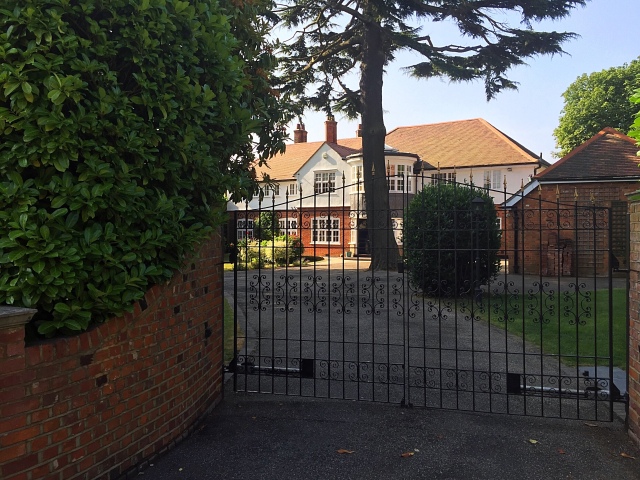 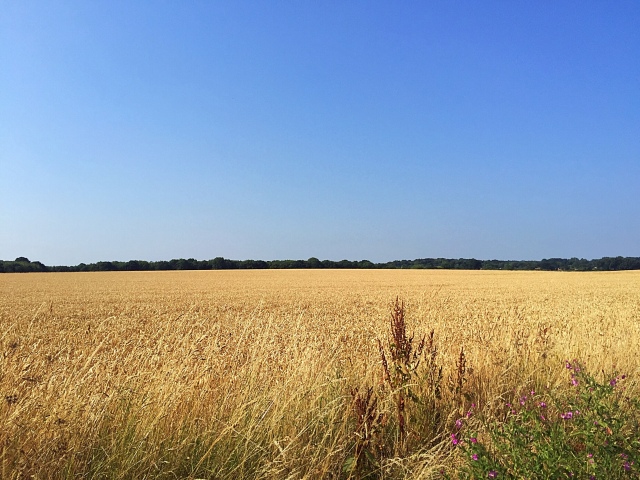 It was finals weekend at Wimbledon as well as the Football World Cup final so it was a bit of a sport fest afternoon. First up was the carry over semi final match between Rafa and Novak – we were cheering for Rafa but sadly it wasn’t his day. Next up was the women’s final between Serena Williams and Angelique Kerber – we were pleased that Angelique achieved her first Wimbledon title. Next up was the third and fourth playoff between England and Belgium in the football World Cup.

Prior to arriving in the UK we had been watching both the Wimbledon and Football World Cup games hoping for a Federer / Nadal final and for England to be in the World Cup final (probably the only time I would be cheering for England). Unfortunately it wasn’t to be. Never mind, we were in good company and the sun was shining : )

On Saturday night we went to The Cuckoo in Ingatestone for dinner and had a lovely meal. It was a beautiful evening and I captured a pretty cool shot of the sun setting. 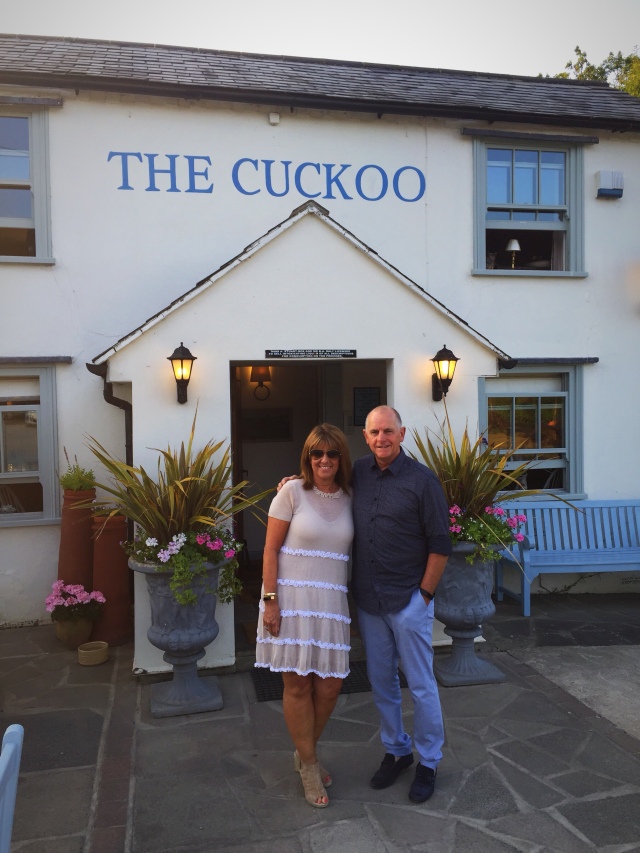 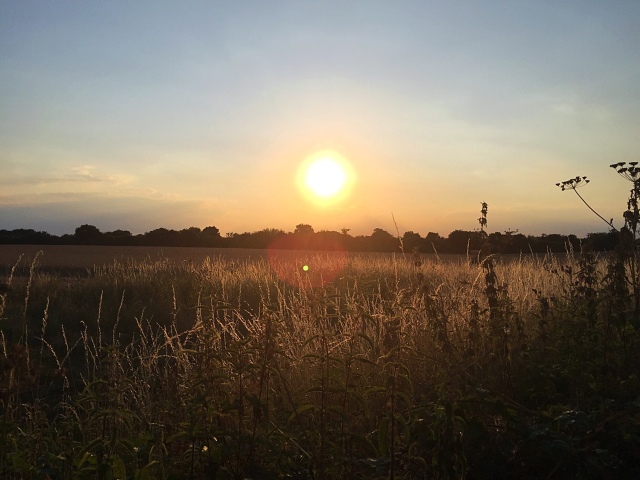 On Sunday I joined Steve, Gary and Gary’s son Nick for a round at Thorndon Park. It is a links type course and due to the hot weather they had been enjoying it was extremely brown. It was NZ v England and we managed to come out on top with very little thanks to me although I did sink the winning putt on the 18th – better late than never I suppose. Steve played well and evened the score with Gary – Gary had won on Friday so they were one a piece.

Thorndon Park Golf Club is a classic design in 1920 by Harry Shapland Colt, one of the greatest golf architects. It is situated in 240 acres of an ancient deer park with the Palladian mansion of Thorndon Hall as the magnificent backdrop to the final hole. 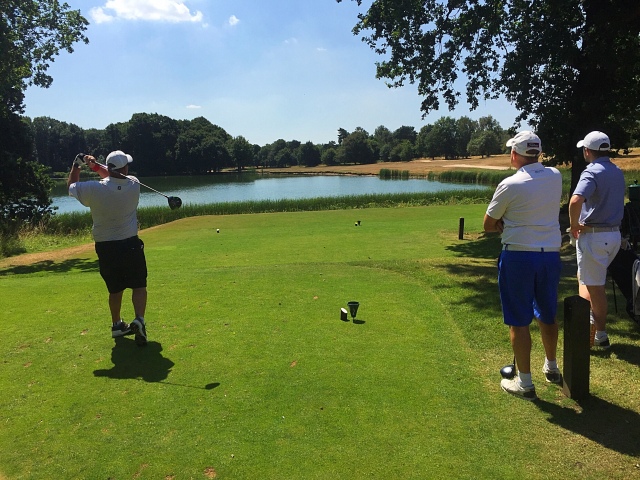 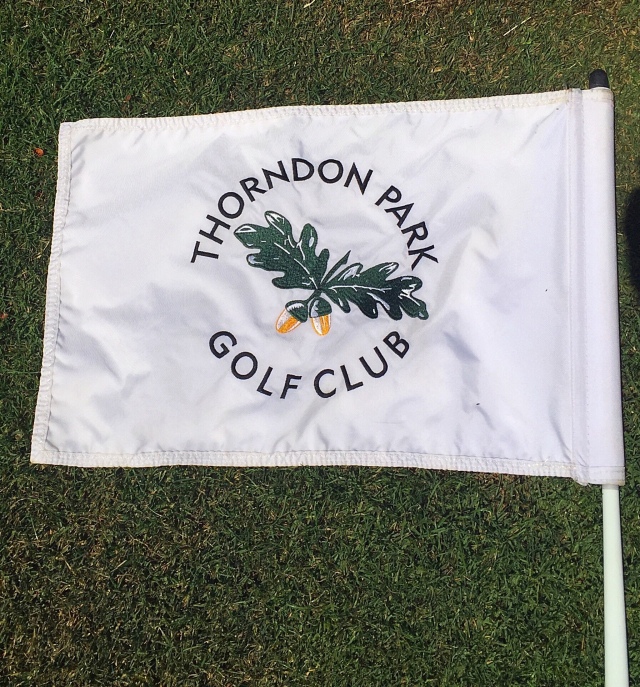 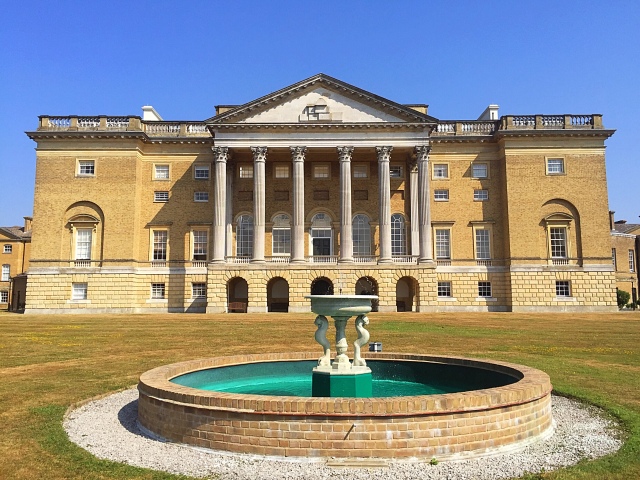 After a few mis purchases and a mad rush around the shops late Sunday afternoon (Gary had got the wrong wood for the BBQ and the butcher didn’t put the kebabs in with the other meat – he didn’t charge us either which was a bonus) we enjoyed a lovely BBQ in the garden. Steve was in his element of course creating big flames. Nick’s girlfriend, Rachel, also joined us so it was great to meet her too.

On Monday we took a trip to the seaside – we visited Aldeburgh (pronounced Allbra) on the Suffolk Coast. It was another beautiful day and Aldeburgh was so quaint. We walked along the coastal path to Thorpeness for lunch at The Dolphin. 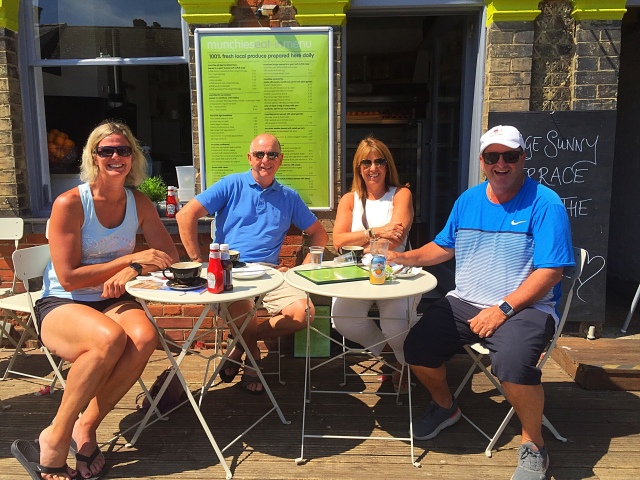 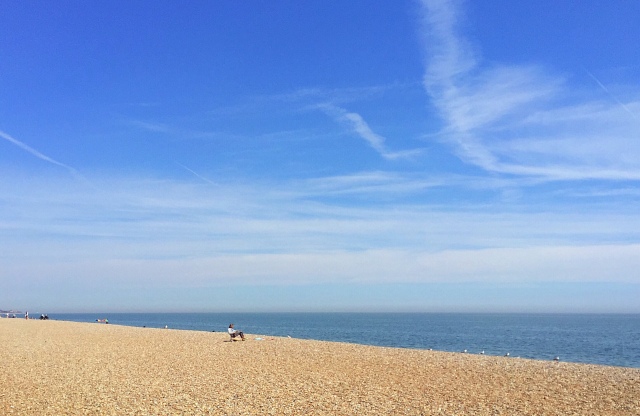 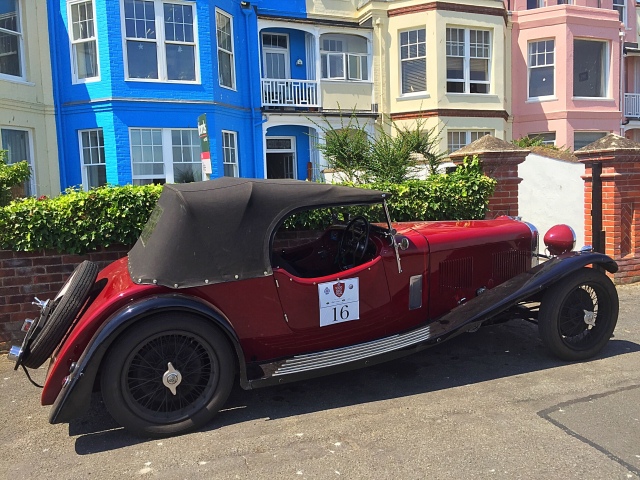 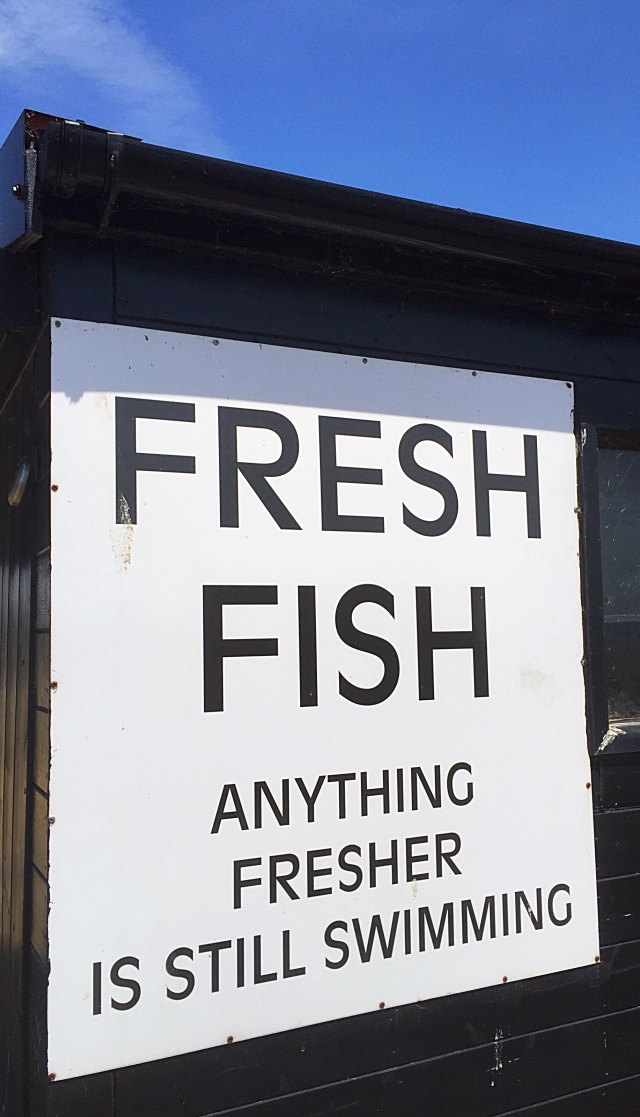 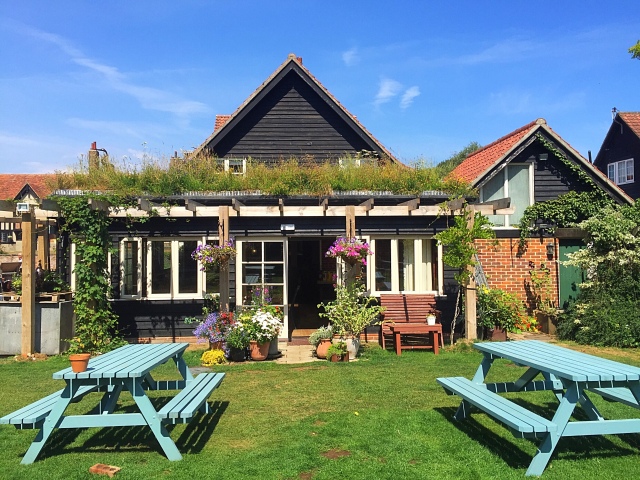 Aldeburgh is a coastal town in the English county of Suffolk. Located on the North Sea coast to the north of the River Alde, the town was the home of the composer Benjamin Britten and has been the centre of the international Aldeburgh Festival of arts at nearby Snape Maltings, founded by Britten in 1948. It remains an artistic and literary centre, with an annual Poetry Festival, along with several food festivals and other cultural events. A former Tudor port, Aldeburgh was granted borough status in 1529 by Henry VIII. Its historic buildings include a 16th-century moot hall and a Napoleonic-era Martello Tower.

Second homes make up about a third of the town’s residential property. It is a tourist destination, with visitors attracted by its Blue Flag shingle beach and fisherman huts, where fresh fish is sold daily, by Aldeburgh Yacht Club, and by its cultural attractions. The three family-run fish and chip shops in the High Street receive high customer gradings.

We then had a look at the golf course and the House in the Clouds before walking back along the beach to Aldeburgh. The House in the Clouds is a water tower at Thorpeness, Suffolk, England. It was built in 1923 to receive water pumped from Thorpeness Windmill and was designed to improve the looks of the water tower, disguising its tank with the appearance of a weatherboarded building more in keeping with Thorpeness’s mock-Tudor and Jacobean style, except seeming to float above the trees. The original capacity of the water tank was 50,000 imperial gallons (230,000 l) but during the Second World War, the House in the Clouds was hit by gunfire from anti-aircraft guns based at Thorpeness. The water tank was repaired using its own steel, which resulted in a reduced capacity of 30,000 imperial gallons (140,000 l). In 1977 the water tower was made redundant by a mains water supply to the village, and additional living space was created. In 1979 the main water tank was removed to fully convert the building into a house. The building currently has five bedrooms and three bathrooms; it contains a total of 85 steps from top to bottom and is around 70 ft high.

The North Sea was remarkably calm and didn’t seem too cold – there were a few people out swimming. We watched a bulldozer haul in a big fishing boat. The boat came in at such a pace and then ground to a halt on the pebbly beach before being winched up – obviously not their first rodeo. We watched them unload the fish – it was certainly the place to buy fresh fish.

We headed back towards Shenfield stopping off at Snape Maltings for a wander and then at the Unruly Pig for a drink. I enjoyed a Hugo which is prosecco, soda water, elderflower syrup and mint leaves – very refreshing. The English countryside and coastline is beautiful when the sun is shining. 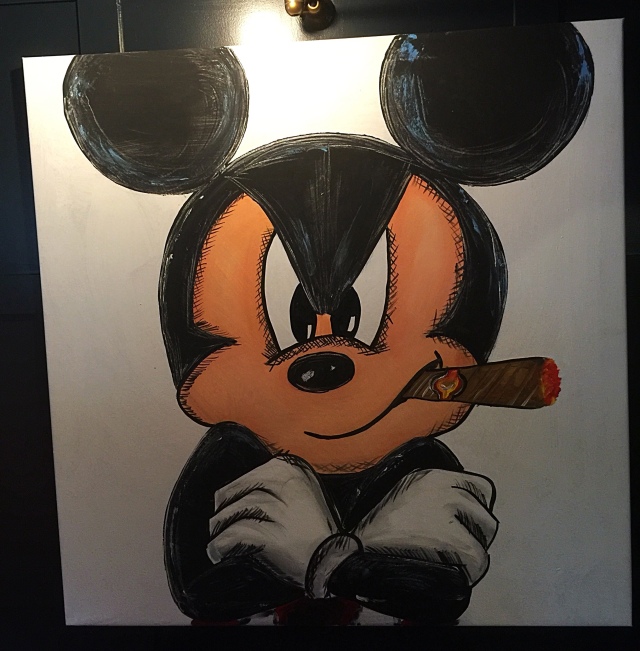 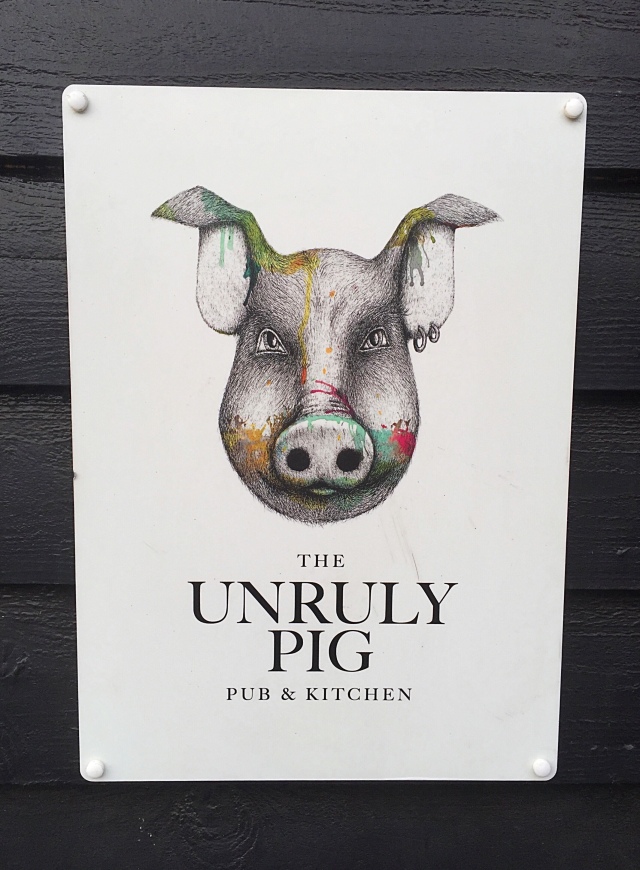 On Tuesday Steve and I ventured into London for the day – it wouldn’t have been right coming all this way without popping into London to see the royals : ). Steve got his Harrods fix while I walked to Kensington Palace – I love walking around the gardens there and hoping for a glimpse of William, Kate, Harry or Meghan. Unfortunately they were all busy! 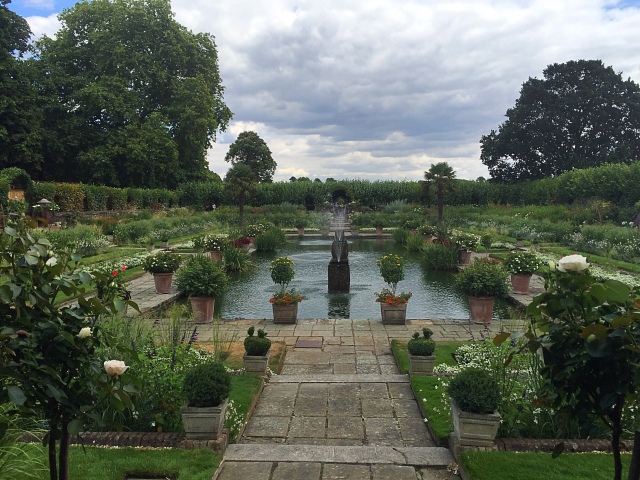 The Sunken Garden at Kensington Palace which was a favourite of Princess Diana – apparently she used to stop to talk to the gardeners and find out more about their choices for that season. This year the garden team have taken their inspiration from the exhibition featuring the Princess’s iconic wardrobe to inform the planting.

We then caught the tube to Oxford Circus and again Steve got his retail fix at John Lewis & Selfridges. I wandered down to Neal’s Yard in Covent Garden to check out the Wild Food Cafe – I am really enjoying my green juices at the moment so ordered a Vibrant Green – kale, celery, cucumber, samphire, nettle, watercress, mint, lime, apple and spirulina. 😋

We headed back to Shenfield to enjoy a pre birthday dinner celebration at the Turks Head with Denise and Gary before saying goodbye to them the next day as we headed north to Edinburgh.

It had been so nice to re connect with our friends and take some time to enjoy their backyard as such. To fact that the sun was shining was the icing on the cake. We look forward to catching up with Denise and Gary again later in our trip when we meet them in Croatia 🇭🇷.

This blog was originally set up to share our 9 month adventure around Europe and the USA with friends and family in 2014. On returning to NZ in January 2015 I decided to carry it on so I could continue to share any future travel adventures - it has become my electronic travel diary. I hope you enjoy and get inspired to visit some of the wonderful places we have visited.
View all posts by SUNGRL →
This entry was posted in United Kingdom. Bookmark the permalink.