Another beautiful morning greeted us.  Ted came to pick us up at 8am to shuttle us to the start of the Mangaparua Track which is about an hour from Ohakune.  If we had been doing the Mountains to Sea Cycle Trail proper we would have started from Turoa, ridden the Old Coach Road from Ohakune to Horopito (we did it the other way round) and then carried on towards the Mangapurua Track.  However, we are a social bunch and we just picked the best bits : )

We had chosen to have guides with us for the Mangapurua Track so Ted and his mate Trevor were riding with us sharing their insight into the area as we went.

The track climbs gently from the gate at the road end through private farmland, regenerating scrub and pockets of native bush.  It wasn’t too bad and everyone coped well – the views over the Tongariro National Park where well worth it at the top.  There is another track that goes down the Kaiwhakauka Valley and at the junction of the two tracks is a carved totara pou.  This pou symbolises the ngahere (forest) and provides spiritual and cultural safety for visitors. 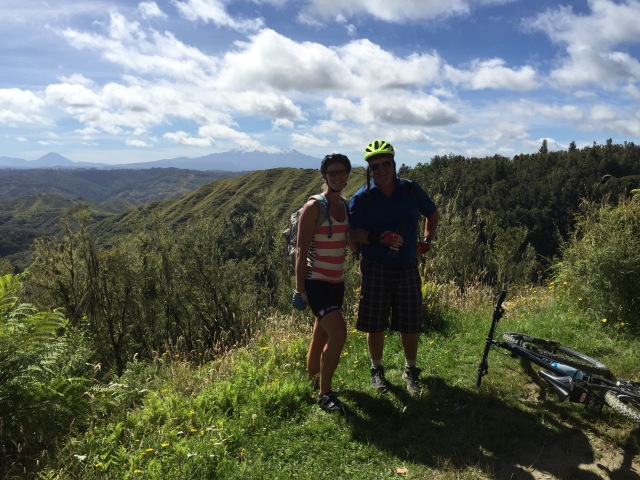 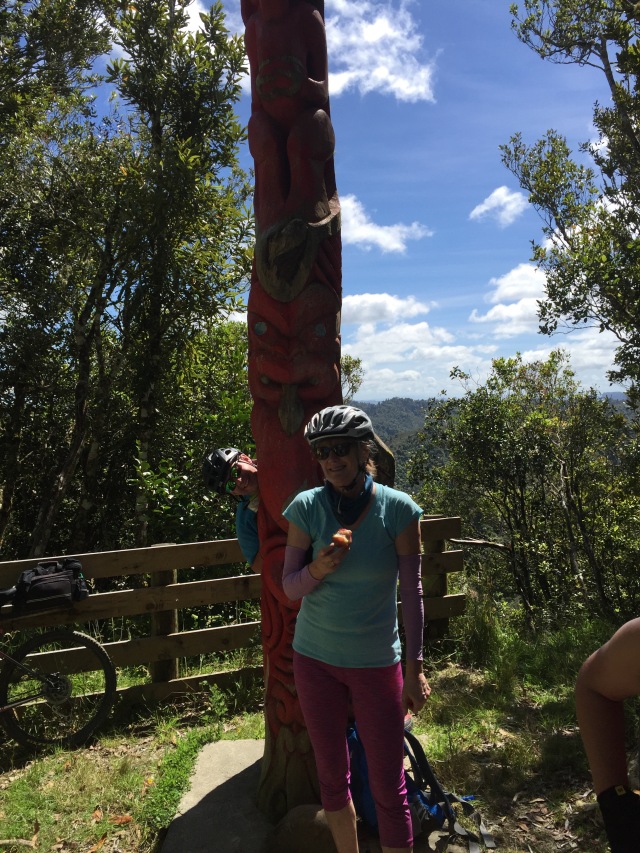 Not long after the track junction we got to the Trig which did require a little climb up to the top – again the views were worth it as we could see the Tongariro National Park to the east and Mt Taranaki to the west.  There are some information boards here that have pictures of the World War I returned servicemen who farmed this area between 1916 and 1942. 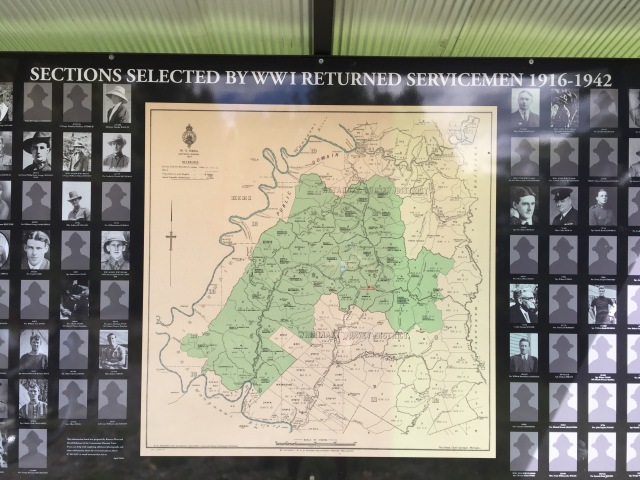 During World War 1, the government offered land in the Mangapurua and Kaiwhakauka valleys to returned servicemen as part of a soldier settlement scheme. In 1917 the first pioneer settlers started taking up the available holdings.

Life was difficult from the start. The land was remote, hilly and untamed. Road access was limited and the settlers had to clear their holdings of dense forest and transform them into farm land. Despite the obstacles, the returned servicemen were enthusiastic and determined. At the peak of settlement there were 30 farms in Mangapurua and 16 in Kaiwhakauka. The shared experiences – through war and these new challenges – created a strong bond, and for a number of years the community thrived.

A wooden swing bridge was constructed across the Mangapurua Stream in 1919. This connected the isolated valley with the riverboats that brought goods along the Whanganui River. However the settlers had always expected that roading access would be improved – a more solid bridge would be built and that it would form part of a road between Raetihi and Taranaki.

Planning for the new bridge started when the timber bridge began to rot. In 1936 the new steel-reinforced concrete bridge was finally opened. It was an impressive sight at nearly 40 metres above the river within the steep ravine walls. Later in the day we saw the remains of the old swing bridge from the concrete bridge that replaced it.

By the time construction was finished, many of the Mangapurua settlers had abandoned their holdings. The physical labour and economic hardship had taken their toll on the returned servicemen and their families. Serious erosion (caused by the clearing of bush), flooding and poor road access were other obstacles that the settlers could no longer overcome.

By 1942 only three of the farmers remained in the valley. They were eventually forced to leave when the government decided that road access would no longer be maintained. By 1944, everyone had gone.  Not only that, they left virtually penniless.

The concrete bridge – now known as the Bridge to Nowhere – is the symbol of that ill-fated settlement in an area known as the “valley of abandoned dreams”.

From the Trig the track heads steadily downhill, passing the only uncut section of forest in the Mangapurua Valley. The first swing bridge in the valley crosses Slippery Creek and a further 1.5 km along you reach Johnson’s.

As you move down the valley, you cross the grassy clearings that were created by the early settlers. Many of the papa bluffs are named after settlers that farmed the surrounding land. The names of these settlers also live on in the wooden signs installed along the track marking the location of the original house sites. Common features in the valley are the rows of exotic trees that mark the road and the house sites.

We stopped at Johnson’s Flat for lunch.  The original farmer Edward Johnson collected the mail twice a week from the Mangapurua Landing and distributed it through the valley.

We met a descendant of one of the returning soliders at our lunch stop.  He sets up camp every summer and just returns to his house in Raetihi every few weeks to mow his lawns.  He had the billy on and offered us a cuppa tea.  He loved to chat and we enjoyed listening to some of his stories before getting back on the bikes. 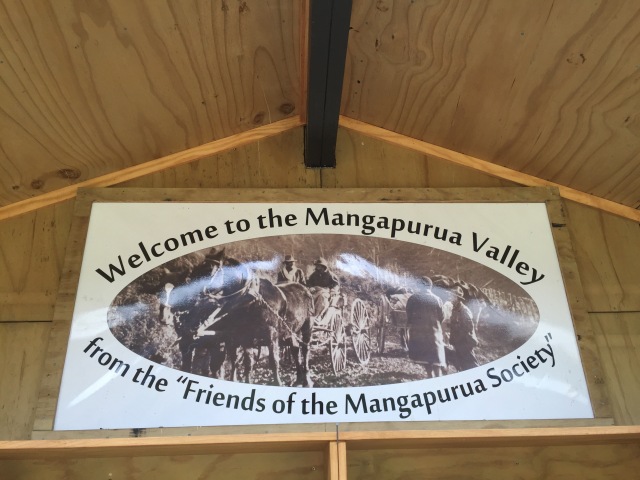 The last 13km provided some challenges with the track becoming narrow as it skirted the bluffs.  There were a number of parts where we had to dismount and walk the bikes.  There are also seven swing bridges to cross which involve tipping your bike up on it’s back wheel and pushing it over the bridges like that.  We all became quite expert at doing this by the end of the day. 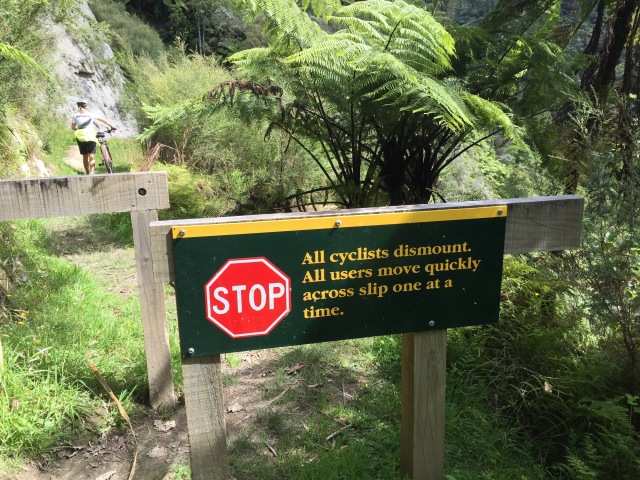 Finally we made it the Bridge to Nowhere – the bridge gets more use now than it did when it was first built. It is the unofficial flagship of Whanganui National Park and a major visitor attraction on the Whanganui Journey – one of New Zealand’s Great Walks.

We still had 3km to go to reach the river where our jet boat awaited us.  We were being transported to the Bridge to Nowhere Lodge for the night.  It was a beautiful day so the ride down the river was great.  The refreshments at the Lodge were even better and after showers we enjoyed sitting on the large balcony enjoying the views up and down the river. 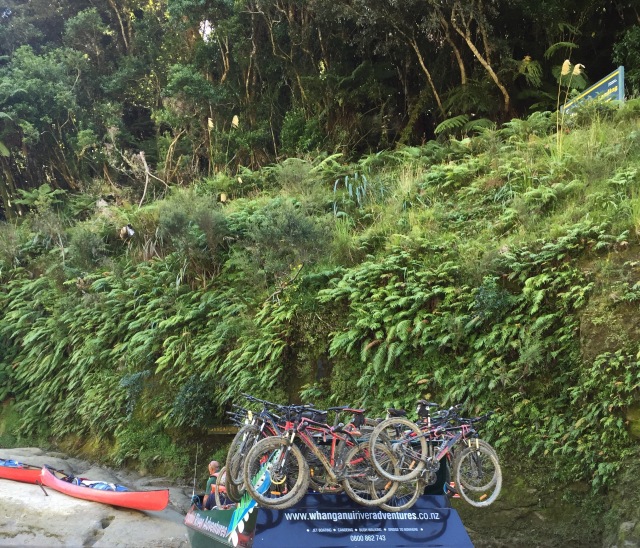 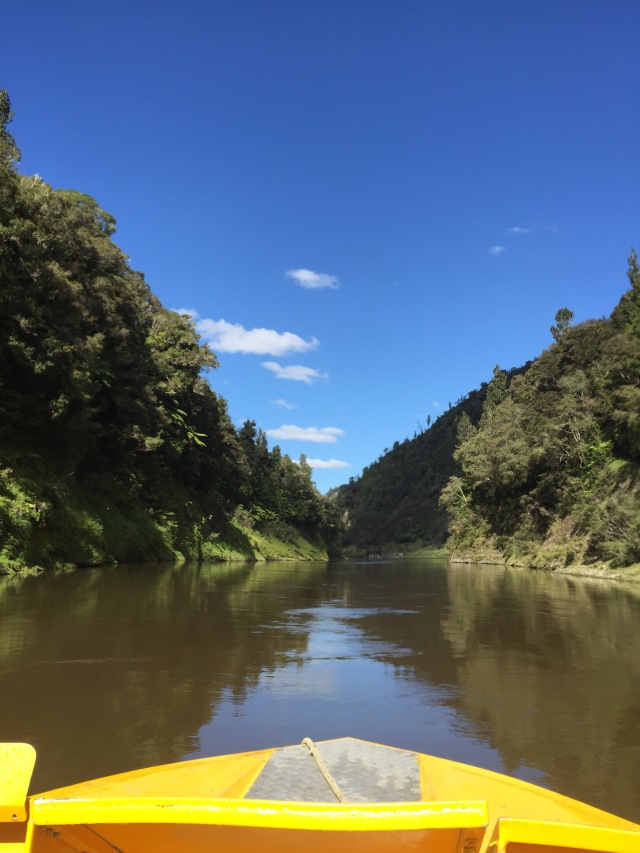 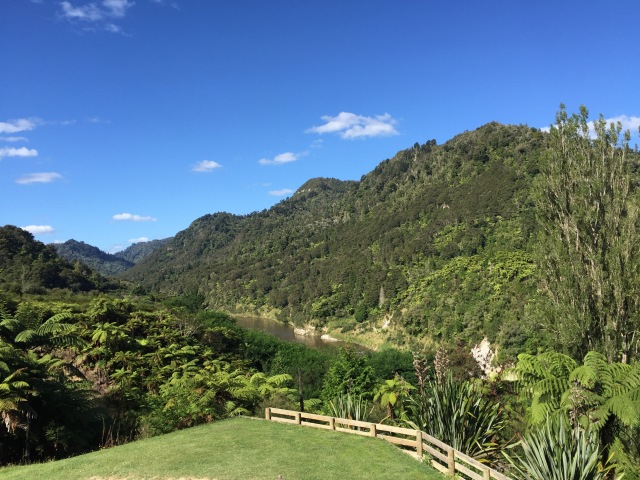 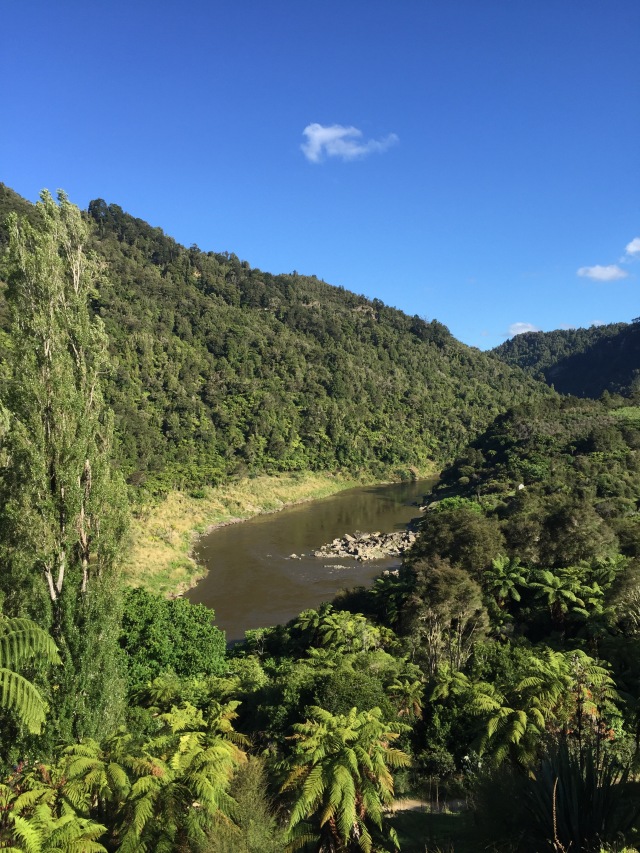 We enjoyed a lovely meal at the Lodge and we all slept like babies apart from the minor earthquake that happened during the night – not everyone felt it but I did.

This blog was originally set up to share our 9 month adventure around Europe and the USA with friends and family in 2014. On returning to NZ in January 2015 I decided to carry it on so I could continue to share any future travel adventures - it has become my electronic travel diary. I hope you enjoy and get inspired to visit some of the wonderful places we have visited.
View all posts by SUNGRL →
This entry was posted in Central North Island, New Zealand. Bookmark the permalink.