After 9 nights in Mexico we flew back to Houston, Texas in the US.  This was where we were flying home to NZ from so we thought we would have a couple of days golfing and shopping before making our way home.  We had only ever transited through the airport here so it was a good chance to check it out.

Originally we weren’t going to hire a car but once we worked out that Houston is huge, the public transport was non existent and it was going to be expensive to get taxis we hired a car.  This worked out really well in the end although it was incredibly daunting driving there – the freeways are huge with ramps going all over the place.  Of course everyone knows where they are going and they all fly along at a swift pace.  Doris our GPS did well although we missed a couple of off ramps due to road works etc…

Steve had found this golf course on the internet called Tour 18 where they have reproduced the most renowned holes in the history of golf.  The course opened in 1992 and along with the same concept in Dallas these were the first replica golf courses in America.  The course’s early years were filled with litigation and seemingly endless rounds of golf.  Before the course even opened, tee times were booked for almost the entire first year.  everyone wanted to play a round including celebrities like OJ Simpson, Kurt Russell and Goldie Hawn.

Three courses – Pebble Beach, Pinehurst and Harbour Town – sued Tour 18 for replicating their holes, but all the lawsuits brought more publicity for the innovative course.  A US district judge ruled Tour 18 could keep its replica holes as long as the course made it clear they were replicas and that the original courses were not associated with the new one.  The original owners sold the course to Arnold Palmer Golf Management in 1999.  Each hole has a sign with some information about the hole and a disclaimer at the bottom per the judge’s ruling : )

The second hole replicated the sixth hole at Bay Hill Golf Club.  The late Arnold Palmer loved this course so much he purchased it in 1976.  He considered the sixth hole to be the finest hole on the course “it lets you bite off as much as you care to chance” he said.  From the tips it is a 543 yard or 480 metre carry across a lake.  During practice rounds for the Bay Hill Invitational, John daly and Greg Norman used to try and carry the lake and drive the green.  In the 1999 Bay Hill Invitational John Daly carded an 18 on this hole.

The third hole replicated the third hole at Pinehurst Number 2.  This hole is considered by many to be one of the greatest short par four’s in all of golf.  This Donald Ross designed hole will tempt the longer hitters but a more conservative player will lay up with a short iron.  We took the conservative approach and layed up : )

They have also replicated Amen Corner from Augusta on holes five to seven.  This includes the blooming azaleas, cobblestone bridges and a white Masters scoreboard with the latest-played Masters leaders updated on it.

The ninth hole replicates the seventeenth hole at TPC Sawgrass – this is the short par three across the water to an island green.  In the opening round of the 1992 Players Championship, 64 balls were hit into the water.  The stroke average for the day was 3.79, the highest over par ever recorded for a hole on the PGA tour.  John Mahaffey called it the easiest par five on the course.  Golf Magazine’s international panel ranks TPC at Sawgrass among the 100 greatest courses in the world.  The Players Championship is considered the fifth major.  TPC Sawgrass is in Florida and was designed by Pete Dye.

We both hit great tee shots and made pars on this hole.  No donating to the golf gods in the lake : ) 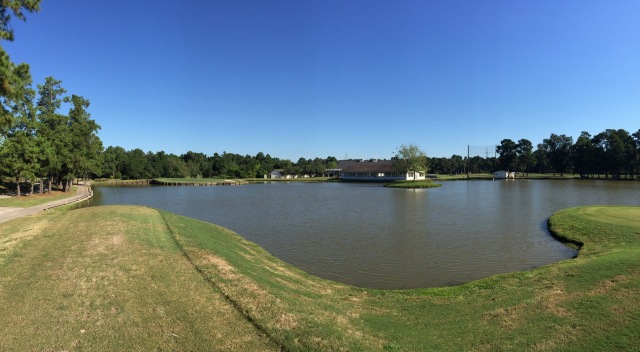 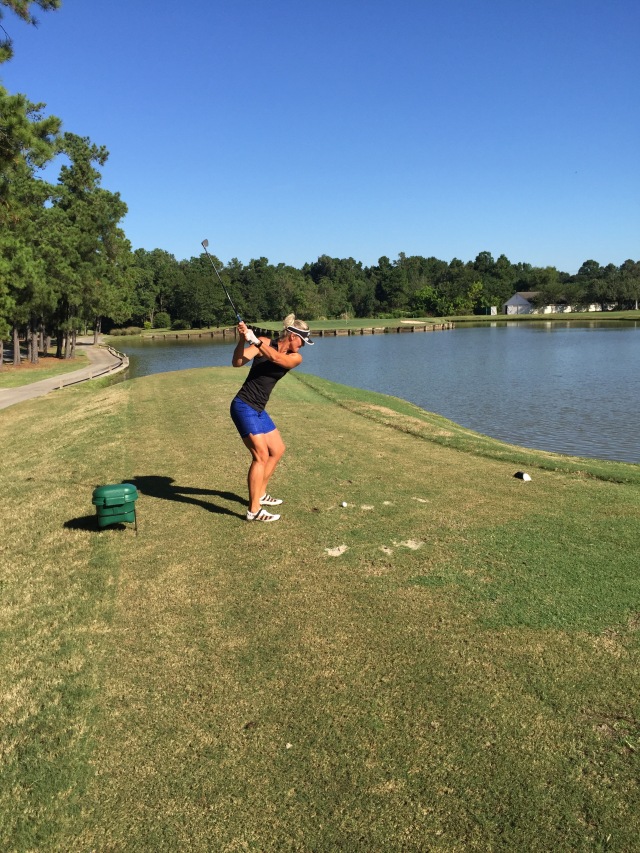 The fourteenth hole replicates the third hole at Oakmont Country Club in Pennsylvania.  This course was established in 1903 and has played host to more major championships than any other course in America.  Seven US Men’s Opens, four US Amateurs, three PGA’s and one Women’s US Open have been played there.  It is known for it’s fairway hazards and the third hole boasts the famous church pew bunkers.

The eighteenth hole replicates the eighteenth hole at Doral’s Blue Monster course in Florida.  It is consistently ranked as one of the toughest top ten finishing holes on the PGA Tour.  Two time Doral winner, Raymond Floyd, describes the hole this way, “It is the toughest par four in the world.  I have made sixes and sevens on it hundreds of times.”

It was a fun course to play and I learnt a lot along the way.

Next stop was the Premium Outlet Mall – another adventure on the Houston freeways!  After a couple of hours Steve had to go an find a mall while I continued to shop up a storm.  We eventually got to our hotel about 7.30pm.

We had dinner at a local pub on one of the nights and we would have to say we have never seen so many well endowed African American women in one place before – not only were they well endowed in the bust department but also in the booty department.  Wow they are some genetics : )

We didn’t fly out until 9.25pm on the Saturday night so Steve spent the morning watching the Ryder Cup while I pottered around.  We then went to one last shopping mall, although the suitcases plus extras were already full!  We dropped the rental car off safely and after nearly three months and about 45 rounds of golf we were ready to come home. 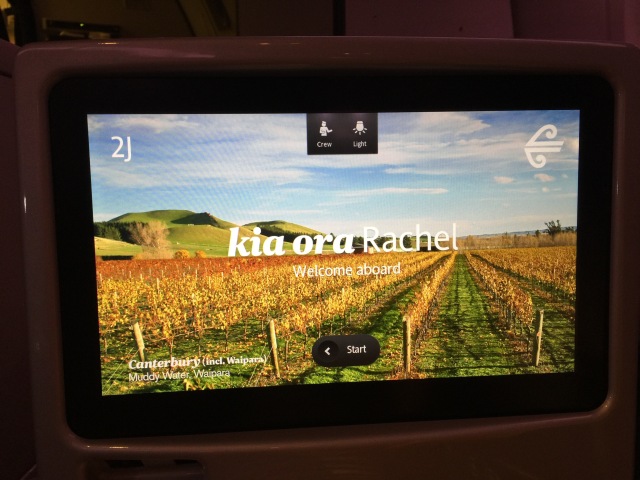 Houston was founded on August 28, 1836 near the banks of Buffalo Bayou (now known as Allen’s Landing) and incorporated as a city on June 5, 1837. The city was named after former General Sam Houston, who was president of the Republic of Texas and had commanded and won at the Battle of San Jacinto 25 miles (40 km) east of where the city was established. The burgeoning port and railroad industry, combined with oil discovery in 1901, has induced continual surges in the city’s population. In the mid-20th century, Houston became the home of the Texas Medical Center—the world’s largest concentration of healthcare and research institutions—and NASA’s Johnson Space Center, where the Mission Control Center is located.

Houston’s economy has a broad industrial base in energy, manufacturing, aeronautics, and transportation. It is also leading in health care sectors and building oilfield equipment; only New York City is home to more Fortune 500 headquarters within its city limits. The Port of Houston ranks first in the United States in international waterborne tonnage handled and second in total cargo tonnage handled.  Nicknamed the “Space City”, Houston is a global city, with strengths in business, international trade, entertainment, culture, media, fashion, science, sports, technology, education, medicine, and research. The city has a population from various ethnic and religious backgrounds and a large and growing international community. Houston is the most diverse city in Texas and has been described as the most diverse in the United States.  It is home to many cultural institutions and exhibits, which attract more than 7 million visitors a year to the Museum District.

This blog was originally set up to share our 9 month adventure around Europe and the USA with friends and family in 2014. On returning to NZ in January 2015 I decided to carry it on so I could continue to share any future travel adventures - it has become my electronic travel diary. I hope you enjoy and get inspired to visit some of the wonderful places we have visited.
View all posts by SUNGRL →
This entry was posted in Texas, USA, United States of America. Bookmark the permalink.