Today we played golf at the Three Crowns Golf Course which is in Casper, Wyoming.  It came highly recomended and it didn’t dissapoint.  We were supposed to play yesterday afternoon also but someone put their back out getting out of the car!  He was much better this morning but still wasn’t sure he would be able to play until he swung a club.  I wanted to play regardless so we went to the golf course for our 8am tee time anyway.  After warming up he decided he would be fine and he was.

This is another golf course built on reclaimed land that had been used in the energy industry in days gone by.  In the case of Three Crowns this land used to be an oil refinery.  Our road trip starting in Calgary, Canada and then going through Montana and Wyoming has been really interesting in terms of the various energy industries that have and are still the basis of these provinces and states.  See the article below re the history of the land used for the Three Crowns Golf Course.

We played the first nine on our own and then a guy who had been playing behind us joined us on the 10th.  His name was Nick and he was from Gillette, Wyoming which is about 175km north of Casper.  His wife, Noreen, is a State Legislator and was in town for a mining and oil summit so he thought he would have a game of golf.  Turns out he was quite a handy golfer on a 4 handicap.  Steve immediately decided they should play for the Presidents Cup – the US versus the rest of the world.  Steve had to work pretty hard to regain the honour and he reckons he won the back nine by 1 hole.  Nick said he wasn’t keeping score : )

Noreen’s summit was being held nearby so she joined us for lunch in the Clubhouse.  We also met a few other people that were attending the summit including some lobbyists.  We had some interesting discussions about politics and nuclear power.  Wyoming is a fairly strong Republican state so although not really wanting to vote for Donald Trump they feel they don’t have much choice as they certainly don’t want Hilary Clinton to be President.

What they have done in terms of cleaning up this old oil refinery site is impressive and the state of Wyoming prides itself on making a huge effort to right the wrongs of earlier years.  Nick is a retired engineer who worked in the coal industry.  There are three coal operations in Gillette where he lives and they are all facing bankruptcy due to the price of coal falling.  These towns that we have been travelling through are real ‘boom or bust’ towns due to the industries they rely on from an economic perspective.

Email addresses were exchanged and an invitation to NZ was extended to Nick and Noreen before we went on our way.

I decided to do some exploring in downtown Casper this afternoon.  On my way back to the hotel the skies got quite black and I could hear thunder in the distance.  I upped my pace and only had about a kilometre to go when the heavens opened up.  I managed to find a tree to shelter behind  and being the eternal optimist thought that the skies were clearing.  The next minute it was hailing!  OK, maybe it wasn’t going to clear anytime soon.  I decided to Skype Steve to come and pick me up – I told him I was under a tree outside Rainbow Real Estate – ironic really : ). The next minute the wind and rain changed directions so I had to move around to the other side of the tree – it was such a quick turnaround and then more hail started falling.

Steve then located me and I came back to the hotel to dry off.   The rain stopped eventually so we took a trip to the supermarket – part of the hotel carpark was flooded and when we parked outside the supermarket we discovered the hail was still lying on the ground.  We went from about 33 degrees on the golf course to 14 degrees within a few hours.  I’m sure it will be back to normal again tomorrow : ) 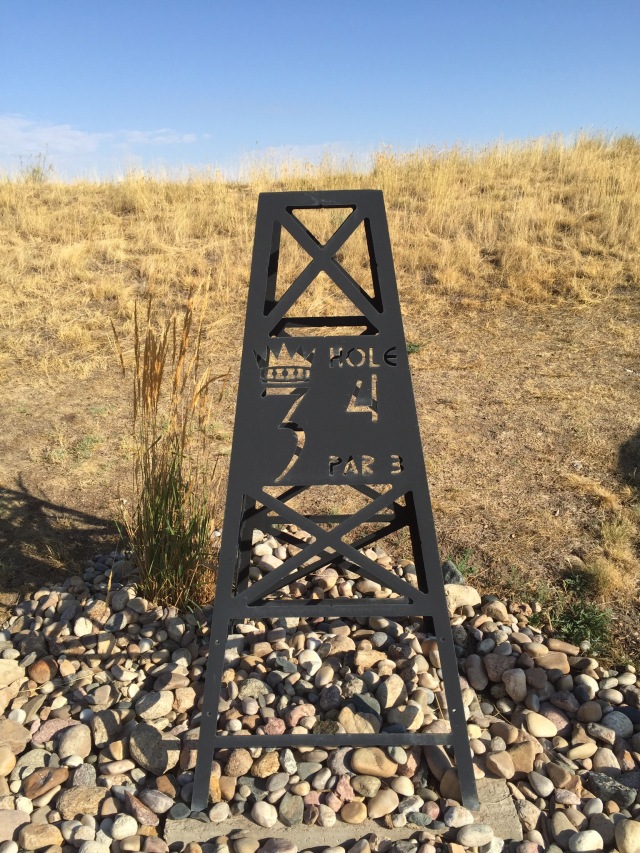 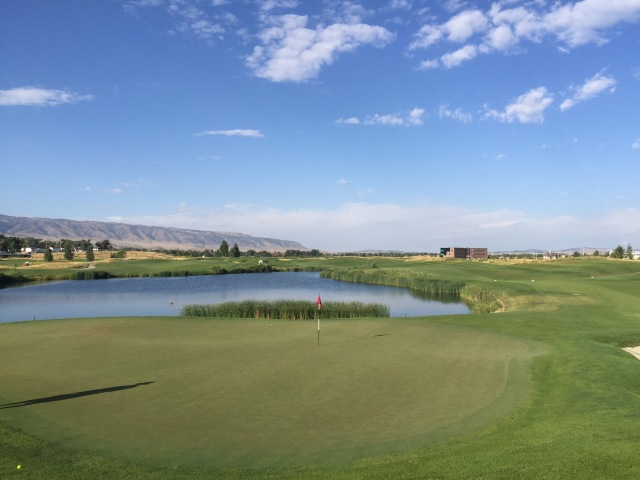 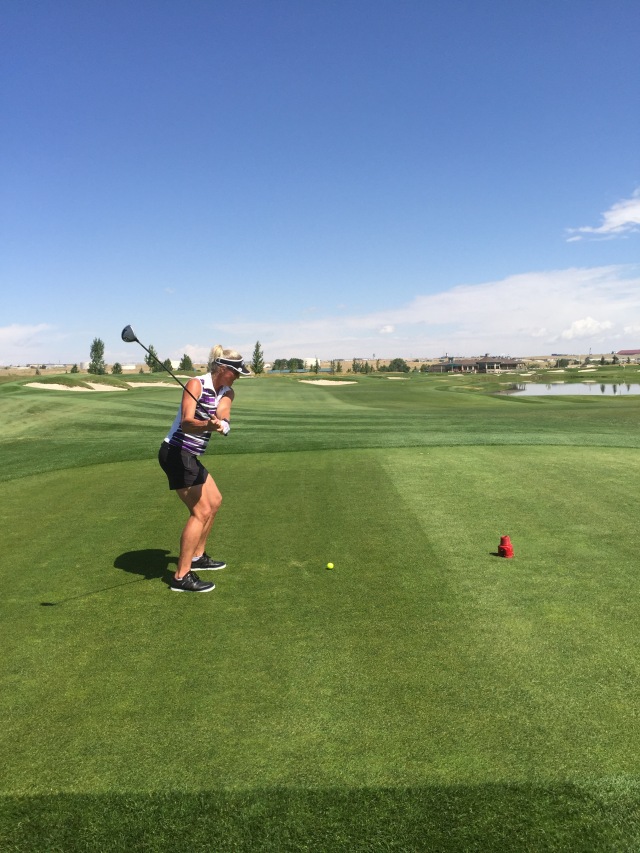 Hail still on the ground about an hour later

Wyoming is America’s least populated state, and the city of Casper, with 54,000 residents, is one of its benchmark towns. Casper was built on the back of the energy business – especially oil and natural gas, and the city’s past, present and future are directly linked to this vital industry.

Given that fact, it’s appropriate that Casper’s newest and best golf course was built on the site of one of the region’s largest and longest-operating oil refineries. Smack dab in the middle of town, and directly adjacent to the North Platte River, lies Three Crowns Golf Club, an award-winning track and remediation project on the former Amoco Oil Refinery.

Where once there were tanks and towers and heat exchangers and thousands of miles of pipe, there is now a gleaming and green, par-72, 7,065-yard Robert Trent Jones, Jr.-designed course. The layout has 110 acres of manicured turf and 45 acres of native grasses. Eight lakes – four of which help remediate water pollution – come into play on 14 holes, and 84 bunkers filled with white sand punctuate the golfscape while adding challenges galore.

Three Crowns is named for BP Amoco’s old symbol – crowns of gold, white and red, which represent the three different grades of gasoline sold by the company. The golf course occupies land that still contains millions of gallons of refinery product scheduled for recovery over the next two decades.

The successful exploration and discovery of abundant oil reserves in Wyoming has been the driving force in the economy in the state for decades and led to the construction of the Midwest Oil Refinery in Casper in 1912. The facility is a significant part of the city’s history, but the condition of the property around the refinery and the runoff from it into the river was a health risk and a huge cause of concern for local residents.

The 340-acre site pumped and refined 48,000 barrels of oil a day for eight decades before Amoco announced the refinery would be closed. On December 13, 1991 – as stories grew of basements on the site filled waist-deep with oil leeching from the ground – the last barrel of gasoline was refined and the site was shut down. It took eight years before the Wyoming Department of Environmental Quality signed a consent decree with the corporation to establish a framework for cleanup of the property. The site, now known as Platte River Commons, includes the golf course, a burgeoning business park, jogging trail and riverside parks.

The department then went to work with the entire Casper community and identified an environmentally safe reuse of the land. It was quite an undertaking as over the years close to 300 million gallons of oil had spilled onto the site.

One of Jones, Jr.’s biggest challenges in designing Three Crowns was adjusting to the requirement that cuts could not be made deeper than six feet. In preparing the site, 3,000 miles of pipe and 400,000 cubic yards of concrete were removed, and contaminated soil was capped with 6 feet of clean dirt. Landowner BP Products North America, which had merged with Amoco, then installed a remediation system; an intricate arrangement of pumps, oil separators, monitoring and recovery wells and other technology is integrated across the course to treat and test all water, ensuring that it meets environmental standards before it is returned to the North Platte River.

Using high-tech maps that identified places where the soil was uncontaminated at lower depths, Jones’ construction team dug lakes (which they lined with geotechnical fiber to keep out contamination) and used the excavated dirt to build mounds and other features around the course.

The mounds separate the golf holes from each other, lend an isolated feel to the course and are covered in native grasses that turn wheat-colored in summer to beautifully set off the verdant fairways.

There are more than 100 recovery wells working at Three Crowns GC, many on the footprint of the golf course. They produce not only oil (about 30 barrels a day are still taken out of the ground), but water as well. Jones incorporated the water-remediation process into the design.

And what a job the RTJ team did. Opened in 2005 with much fanfare, Three Crowns Golf Club is a jewel to play and a tough course for anyone. Rated at 73.3 and sloped at 133 from its back set of four tees, the track crosses the old rolling refinery site with a combination of long par-3s (all at least 200 yards), monster par-5s (three are 575 yards or longer) and a collection of mostly short par-4s (the longest of which is just 425 yards). 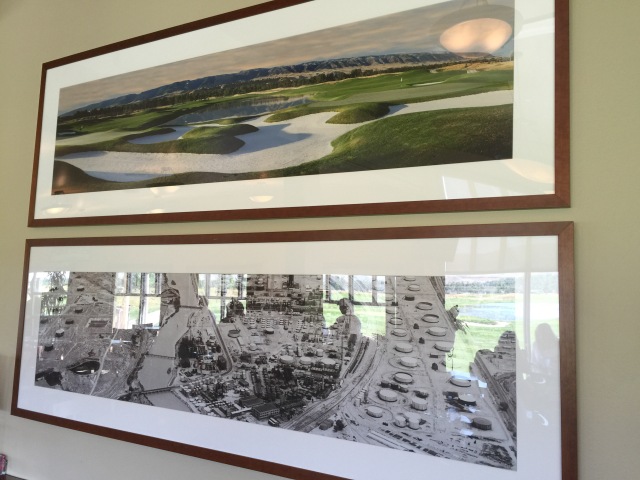 A before and after photo of the land.

This blog was originally set up to share our 9 month adventure around Europe and the USA with friends and family in 2014. On returning to NZ in January 2015 I decided to carry it on so I could continue to share any future travel adventures - it has become my electronic travel diary. I hope you enjoy and get inspired to visit some of the wonderful places we have visited.
View all posts by SUNGRL →
This entry was posted in United States of America, Wyoming, USA. Bookmark the permalink.