Our friend and fellow Manukau Golf Club member Nick Voke made the NZ Men’s Amateur Golf Team to play in the Asia Pacific Championships which was being held in Hong Kong at the beginning of October.  We were already in Asia and said that if Nick made the team we would go and watch him play.

We had never been to Hong Kong before and we were impressed with what we saw on our trip from the airport out to Kowloon where we were staying.  I thought it was quite a pretty city being surrounded by water and islands.  We arrived the evening before the tournament started and flew home to NZ after the tournament concluded on the Sunday.  We thought we would have a bit of time to look around in between the golf but that wasn’t practical given where we were staying.  We did venture to Hong Kong Island to have a drink with some friends one night.  We met them at Sevva on the 25th floor of the Princes Building which had good views over the harbour.  Unfortunately it started raining about 6pm so any visibility we had vanished.  Our limited exploring didn’t give us a good feel for Hong Kong at all really apart from to say it is very expensive.

The Asia-Pacific Amateur Championship is an annual amateur golf tournament. It is played at various locations throughout Asia-Pacific. It is organized by the Asia Pacific Golf Confederation (APGC) and was first played in 2009. It was organized in conjunction with the Masters Tournament and The R&A (Royal & Ancient), organizers of The British Open Championship. There are one hundred and twenty players from thirty nine countries competing.  The winner receives an invitation to the Masters and, along with the runner-up, gains entry to International Final Qualifying for the British Open.

It is also considered an “elite” event by the World Amateur Golf Ranking in that any player that makes the cut is eligible to be ranked. Only the U.S. Amateur, British Amateur, and European Amateur have this distinction. The winner in 2012, Guan Tianlang went on to play in the 2013 Masters Tournament and so became the youngest player in Masters history at 14.

The 2015 tournament was held at The Clearwater Bay Golf & Country Club in Hong Kong which is an elite, privately owned and run country club, located on the Clear Water Bay Peninsula in Sai Kung Hong Kong. Access is restricted for members only.

The Clearwater Bay Golf and Country Club was officially inaugurated on 16th December 1982. Although the grand vision to build this three in one facility comprising country club, golf and marina facilities actually originated in the mid 1960s, it took a decade to complete feasibility studies and file statutory applications before the vision could be realized. Finally the Club was incorporated as a non-profit making organisation in 1977. After making strenuous efforts to fulfil government stipulations, a lease was secured, and construction commenced in phases until the final completion in the early 1990s.

It was a long and arduous process transforming the barren and hilly site into today’s magnificent resort. Sometimes, the course of the Club’s early development was as rocky as the magnificent scenery that surrounds it.

They boast a prestigious membership of over 3,000 people of all nationalities. The unsurpassed scenic environment, sophisticated facilities together with their healthy finances make the Club one of the finest in the region. 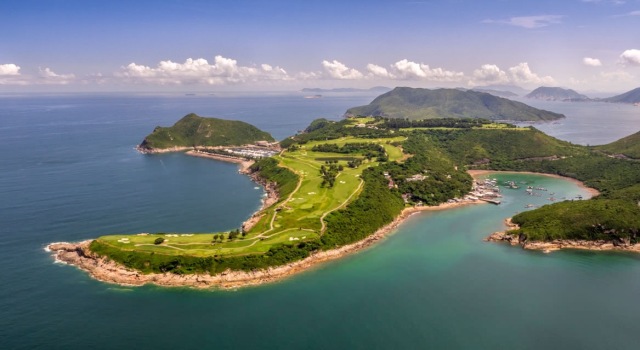 Nick played in this event in 2013 when it was held at the Nanshan International Golf Club in China where he tied for 33rd. Invitations for the championship are sent to the leading players in the Asia Pacific Golf Confederation. Nick is one of six golfers invited to compete from New Zealand – his current world amateur ranking is 143. 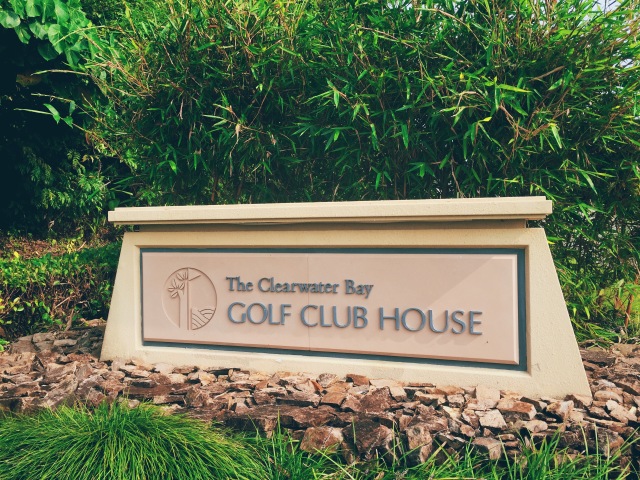 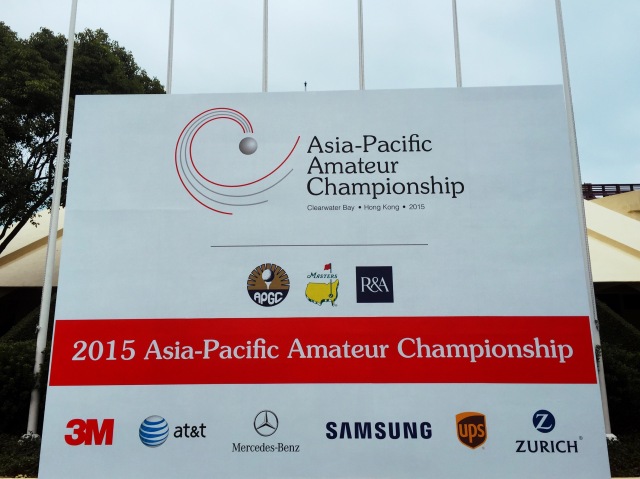 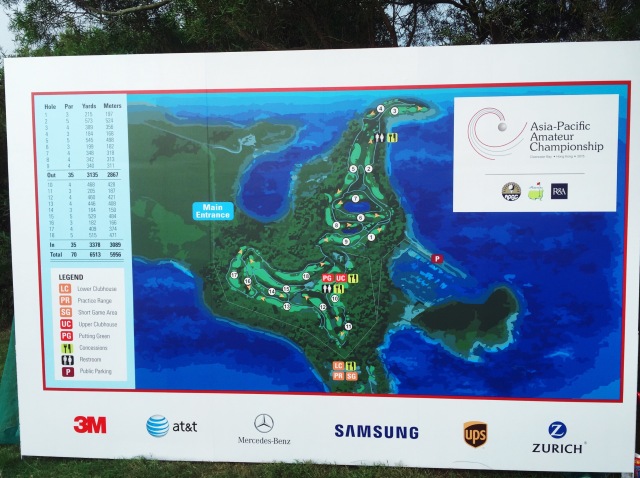 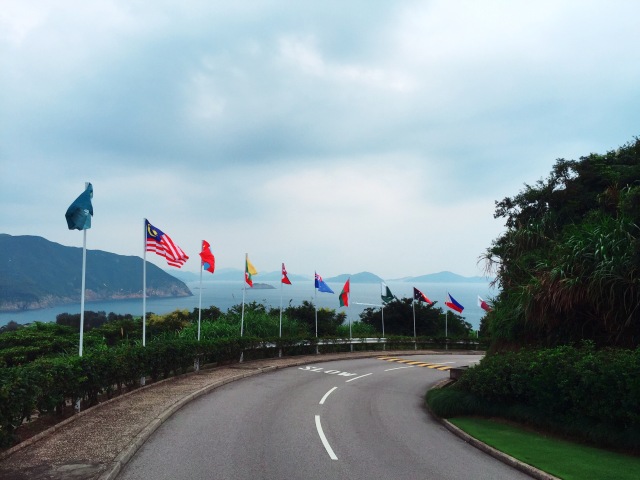 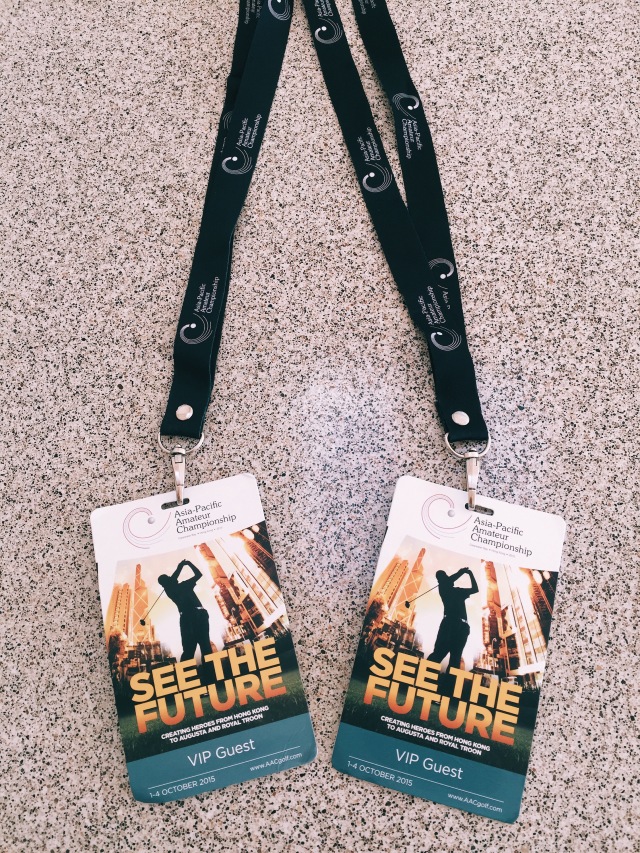 After a rain delayed start to the tournament, Nick finally teed off at about 2pm. He hit his first shot on the par three first to about six feet and made the putt for birdie. This set the tone for the front nine where he ended up five under after nine holes. He missed a birdie putt on the ninth which would have seen him card a 29. A strong performance on the back nine saw Nick get to seven under before poor light halted play on the 17th. In fact it was pretty dark and if it wasn’t for the light coming from the scoreboard it would have been very hard to see where you were putting. Unfortunately a bogie on the 17th saw Nick’s score drop to six under where he was tied for second – the leader had finished at eight under. 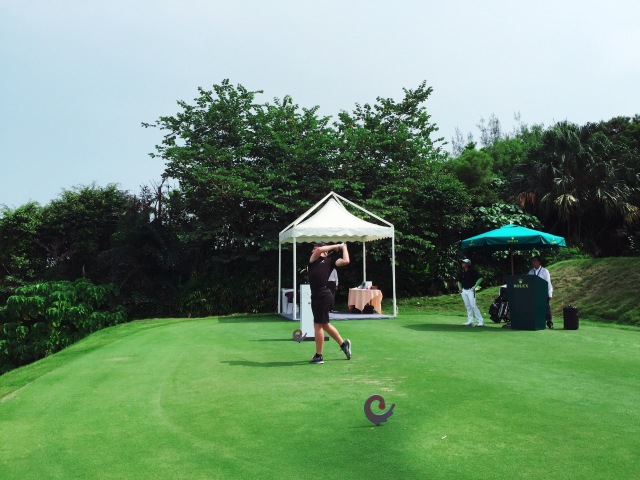 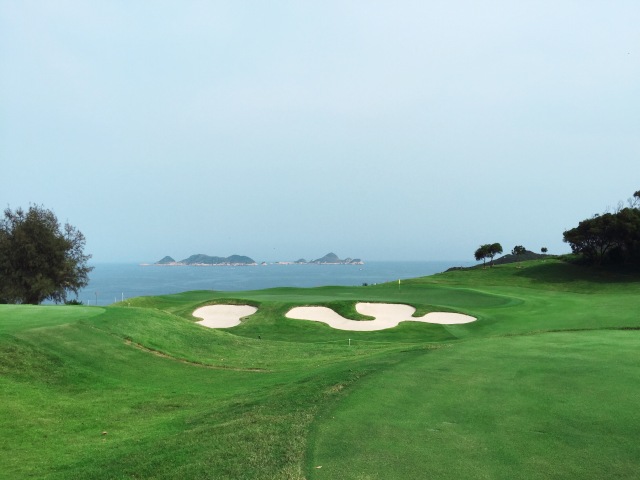 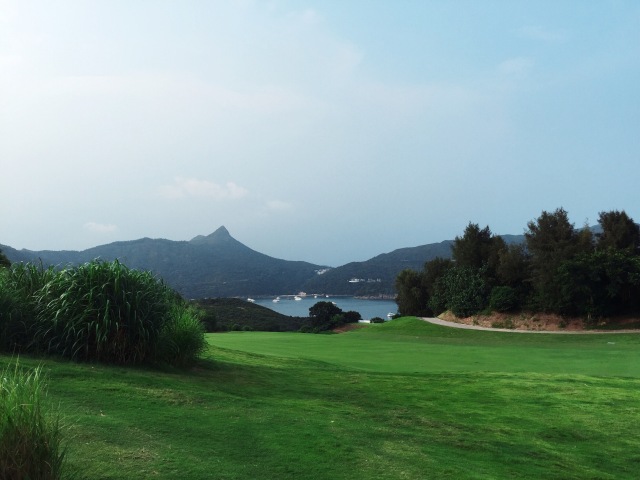 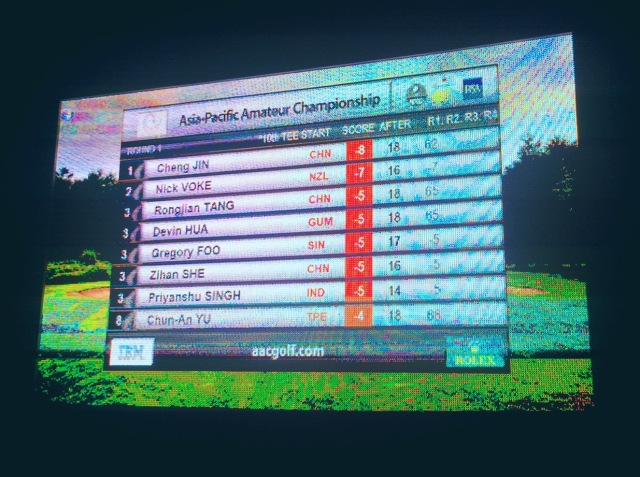 There were a few groups that didn’t finish play on Day One so it was an early start on Day Two to complete those holes before Day Two play could get underway. Nick had a steady round and finished one over for the day due to a double bogey on the par five eighteenth caused by his first tee shot not quite getting across the gulley. 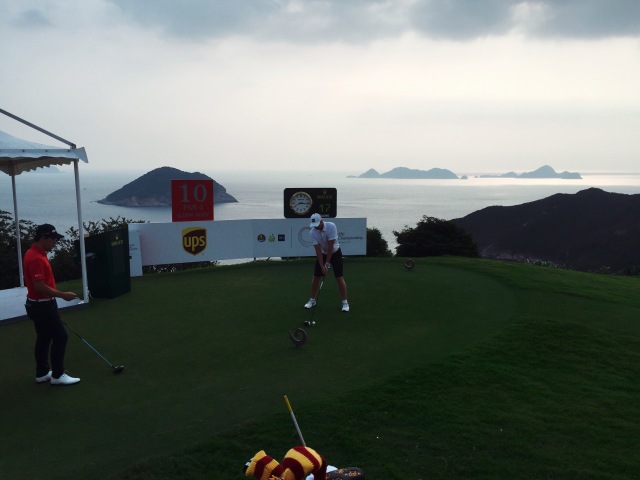 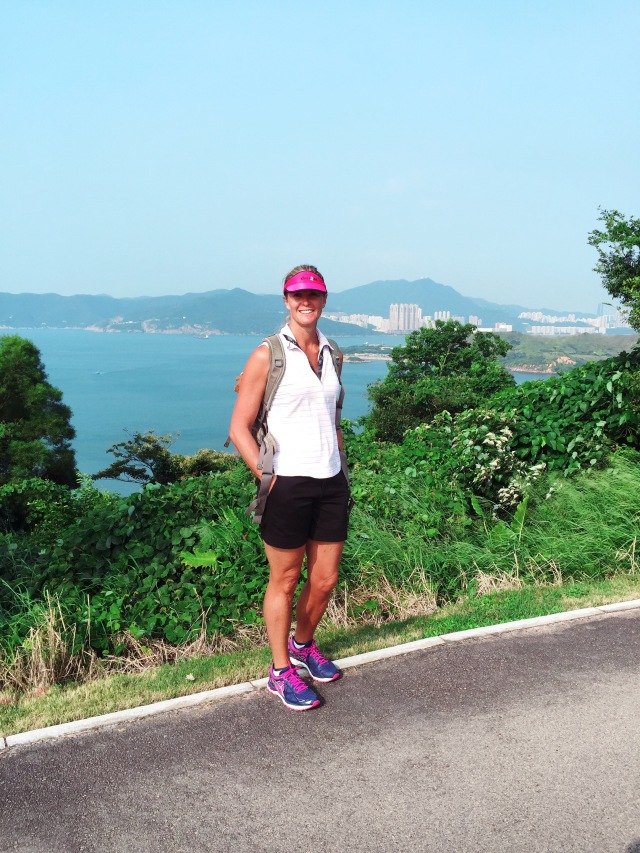 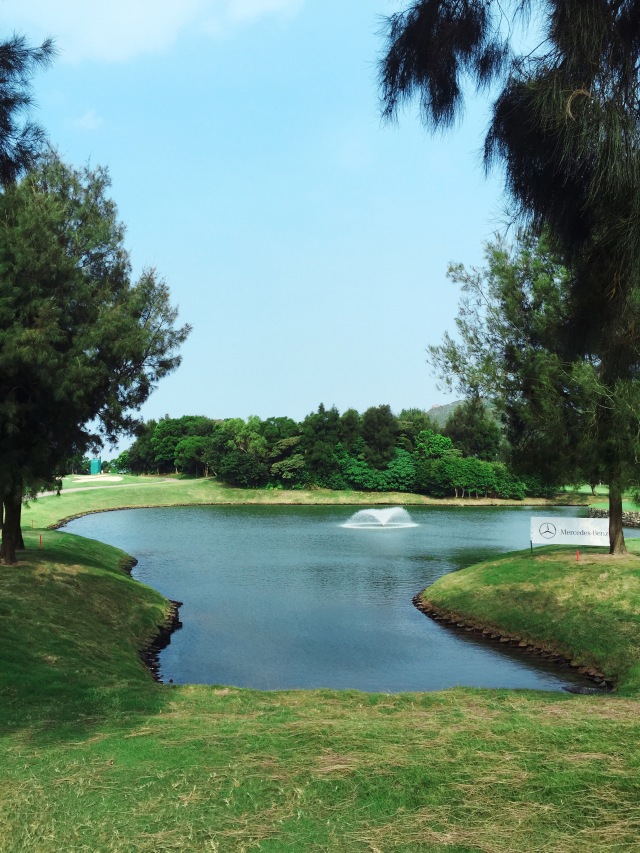 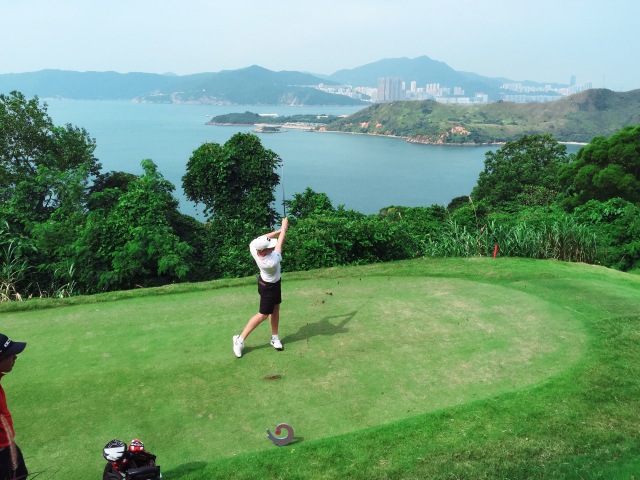 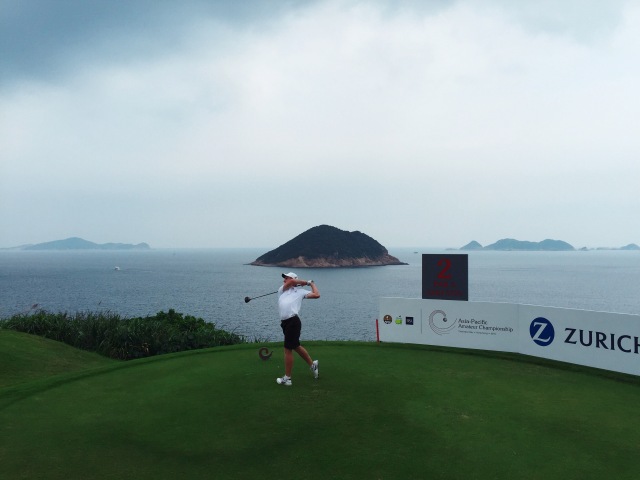 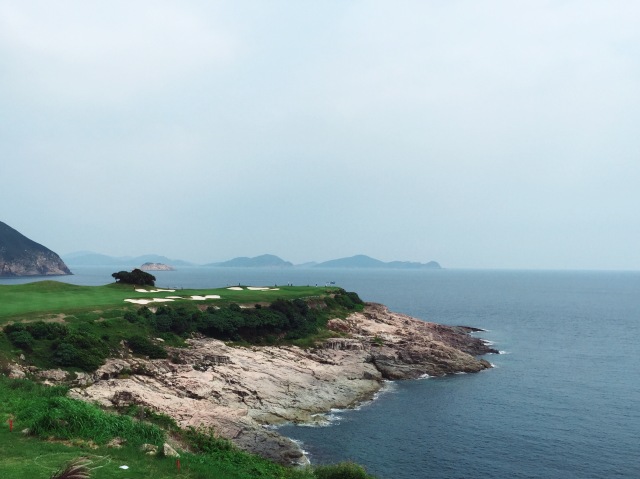 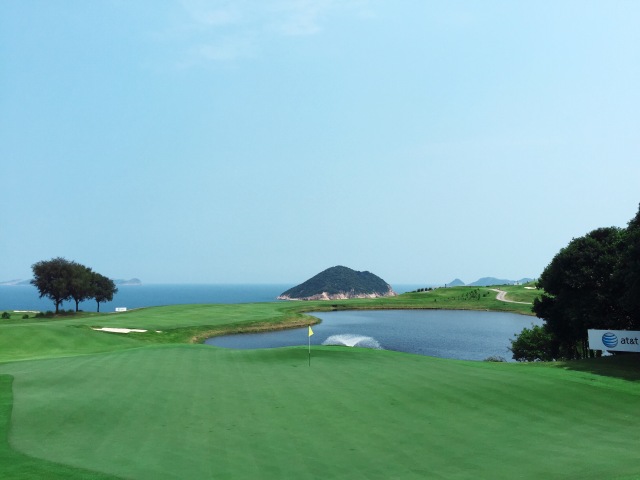 One hundred and twenty players started the tournament with sixty making the cut and progressing through to Day Three. Nick found his groove again and got to four under for the day by the sixteenth hole or nine under for the tournament. He had also missed two eagle opportunities on the par five fifth and on the drive-able par four seventh where he hit his tee shot to within five feet. The wind was starting to get up – there was a typhoon tracking up from the Philippines into central China and Hong Kong was forecast to be affected by it. Unfortunately Nick’s tee shot on the par three sixteenth got blown right into the bush, his second tee shot following suite. A second provisional ball found the green. The first two balls could not be found – the hand sized spiders spotted in their webs in the trees were also a bit off putting : ) A similar fate for his tee shots on the seventeenth saw the nine under cut back to even par. To his credit Nick carried himself exceptionally well and turned around and birdied the eighteenth. A disappointing finish but as Nick said ‘that’s golf”. 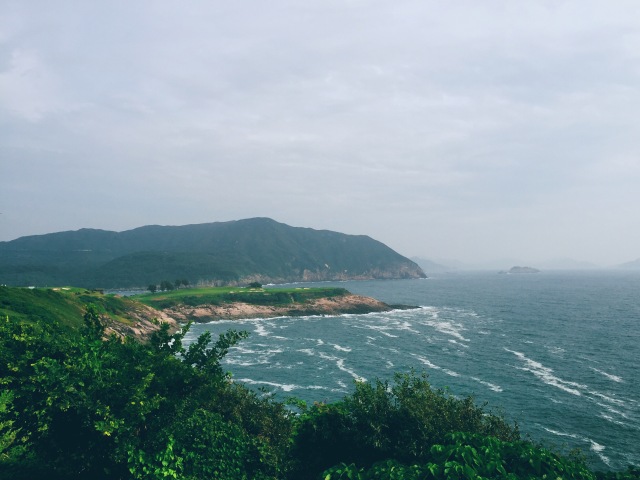 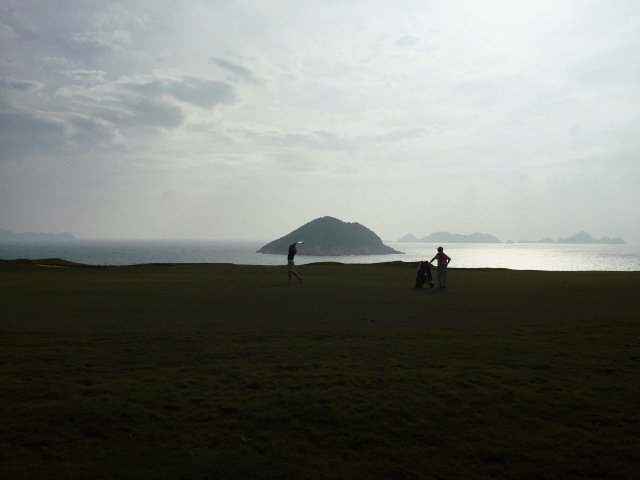 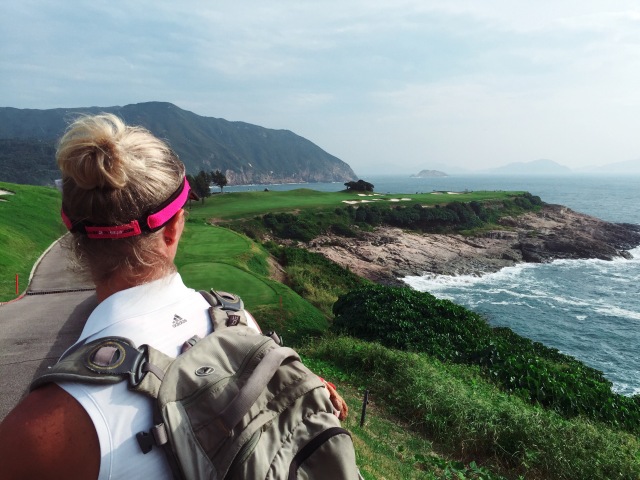 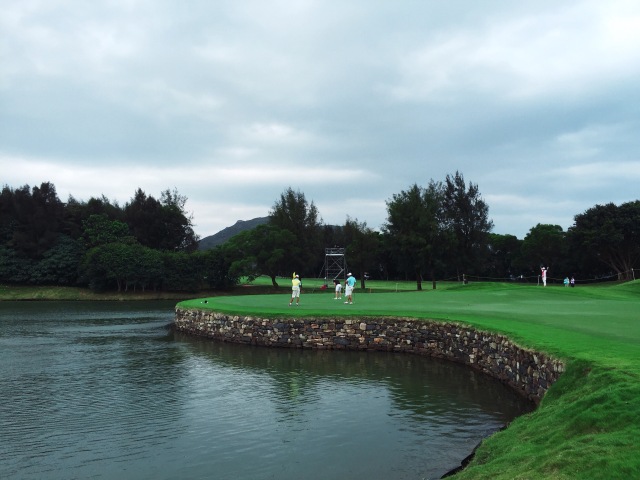 There was talk that Day Four may be called off due to the adverse weather conditions caused by the typhoon but Nick teed off at 7am. As soon as he teed off it seemed the wind really started to blow making it very tricky for the players to get the ball to do what they wanted it to do. The par five second runs along the coast line. The players managed to tee off and hit their second shots before the rain started – it was relentless and everyone had to get low to the ground to avoid being blown over. Not long after this three hooters sounded suspending play. The leaders hadn’t even teed off.

In the end Day Four was cancelled with the winner being the leader after Day Three – Jin Cheng from China. Jin finished on eleven under, one shot clear of Ryan Ruffels and Cameron Davis from Australia who were tied on 10 under. Ryan Ruffels was the highest ranked amateur at the tournament with a world ranking of nine. Jin Cheng was ranked twenty nine. 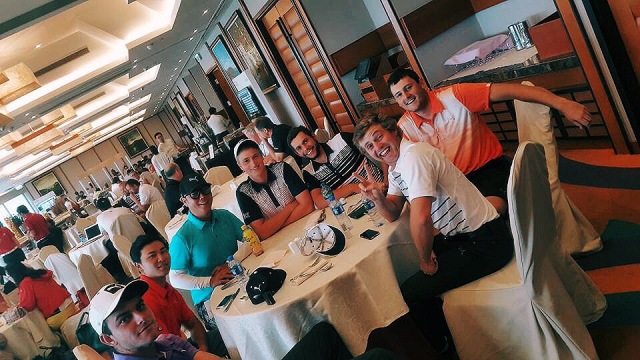 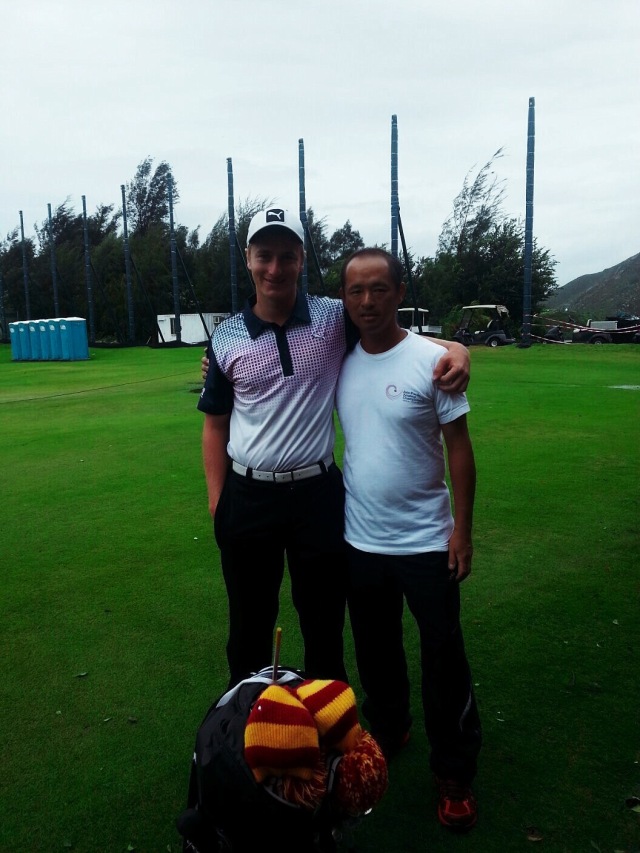 Nick and his Caddy Ben (Ben’s Chinese name is Tong) 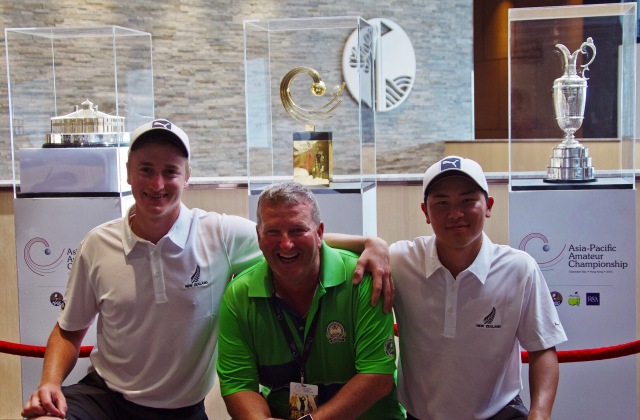 The boys from Manukau Golf Club with the Masters Trophy, the Asia Pacific Trophy and the Claret Jug in the background – Nick Voke, Steve Thomas (past President of Manukau Golf Club) and Tae Koh 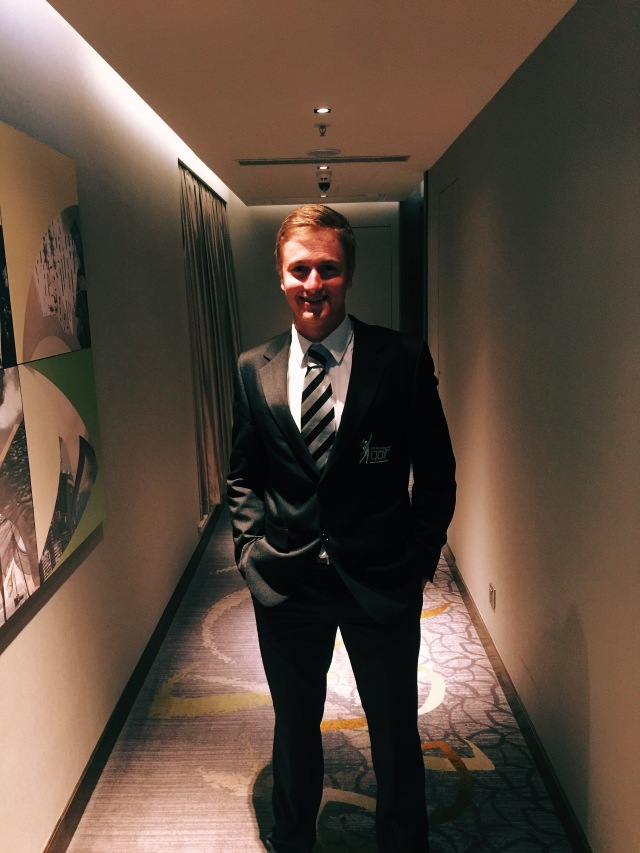 We thoroughly enjoyed watching the tournament.  It was a stunning golf course and it is very uplifting and motivating to watch these young men strive to be the best they can be.  The sportsmanship and spirit in which they play the game is a credit to them.  It was great to watch Nick play and to spend some time with him in between the golf.  We are looking forward to when we can attend another such tournament.

If you would like to read more about the tournament please check out http://www.aacgolf.com&nbsp;

This blog was originally set up to share our 9 month adventure around Europe and the USA with friends and family in 2014. On returning to NZ in January 2015 I decided to carry it on so I could continue to share any future travel adventures - it has become my electronic travel diary. I hope you enjoy and get inspired to visit some of the wonderful places we have visited.
View all posts by SUNGRL →
This entry was posted in Hong Kong and tagged asiapacificgolf. Bookmark the permalink.