On Wednesday the 15th July Rod, Janine, Zoe and I did a Vietnamese cooking class.  I had done a similar one when we were last in Vietnam in 2011 so I knew we were in for a treat.  We had chosen to do Ms Vy’s Taste Vietnam Cooking Class which was the same organisation I used last time but it was then under the Morning Glory banner and held above the Morning Glory restaurant.  Ms Vy is famous in Hoi An as she opened the first restaurant here in 1992 called Mermaids which is still operating today.  She added Morning Glory and Cargo to her portfolio and now has Vy’s Market Restaurant which is a purpose built cooking school.  The bottom floor showcases lots of street food and specialities with the cooking school occupying the next two floors.

As with all of Ms Vy’s culinary ventures the key purpose of Vy’s Market Restaurant is to give customers a sensory food experience unlike any other. In Vietnam, a town’s market represents not just a place of commerce, but a meeting point for catching up, gossiping and, of course, eating – it is at the pulse of all community activity.

With Vy’s Market Restaurant in Hoi An, Ms Vy has captured the essence of a traditional Vietnamese market by offering a wide choice of street foods and specialties to visitors but in a space where they can feel comfortable to enjoy them. Guests get an up close view of how their favourite Vietnamese foods are made – from individual ingredients to the final meal. Whether it be watching how rice noodles are formed, peanuts are traditionally roasted, or bearing witness to a suckling pig being cooked over a charcoal grill, there is much to see, learn and taste.

In her own words, Ms Vy has explained: “My idea was to provide an interactive experience where customers could gain a better understanding of the cooking culture in Vietnam. Everything here is made fresh to order – just like in the actual real market – except here our guests can really see how the ingredients and dishes are prepared. We explain to customers about why we use certain techniques or combine certain ingredients together to create the unique flavours of a dish; giving them an invaluable Vietnamese food experience that they really couldn’t have elsewhere.”

Her latest restaurant venture also emulates her own story – Ms Vy honed many of her cooking skills and business expertise as a child in the local market, learning from the other veteran vendors. Many of her peers as a child jokingly referred to the central Hoi An market as ‘Vy’s market’ because of her daily presence there.  Later, as a young adult, she made history by becoming the first restaurateur to cater to foreign tourists in Hoi An and the town’s first ever teaching chef.  It is therefore only fitting that her latest venue pays homage to this important part of her childhood history in its name – The Market Restaurant – whilst also emulating her famous cooking classes by providing a space that is truly conducive to the interactive nature of the Vietnamese cooking experience.

We met at the Market Restaurant before walking down to the water to catch a boat to Hoi An’s central market.  It is a busy place that engages all the senses – sight, sound, smell and taste.  Vendors with similar produce are usually found together and although there is a lot of banter there is also a sense of competitiveness as they vy for the consumer dollar.  As tourists we were taking photos which some of the older woman took offence at.  We asked our guide why that was and he just said that sometimes they are just having a bad day : ) 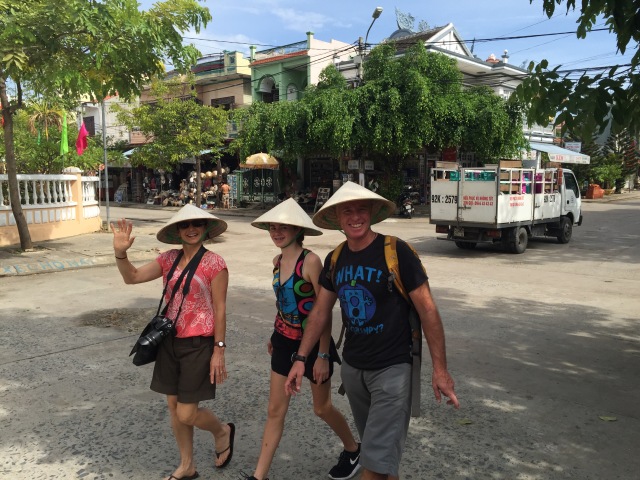 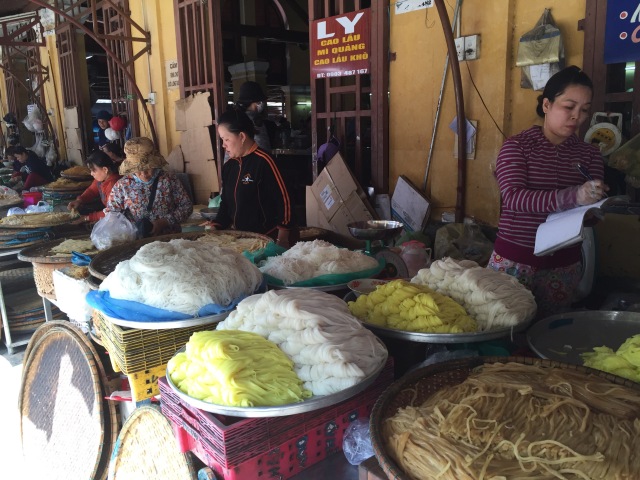 We spent about an hour at the market with our guide explaining all the different types of food we were seeing.  We then stopped at one of the fruit vendors to enjoy some Mangosteen which is so yummy.  It is purpoted to have compounds with antioxidant, anti-bacterial, anti-fungal, and anti-tumor activity. It also appears to have anti-histamine and anti-inflammatory properties. 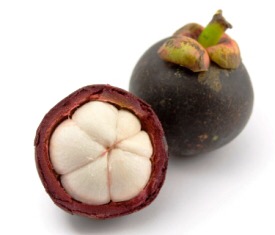 It was then back on the boat to Vy’s Market Restaurant where we did a tour around all the stalls learning more about Vietnamese street food and specialities with lots of samples being devoured.  I can’t get enough of this food!  There is a weird and wonderful section which included silkworm salad – Rod was brave enough to try that and said it wasn’t too bad.  I thought I was pushing the boundaries trying pigs ear and snails.  The pigs ear was very chewy.  I didn’t quite have the right technique to suck the snail flesh out of the shell – they were very small.  The flavours on the outside were good though. 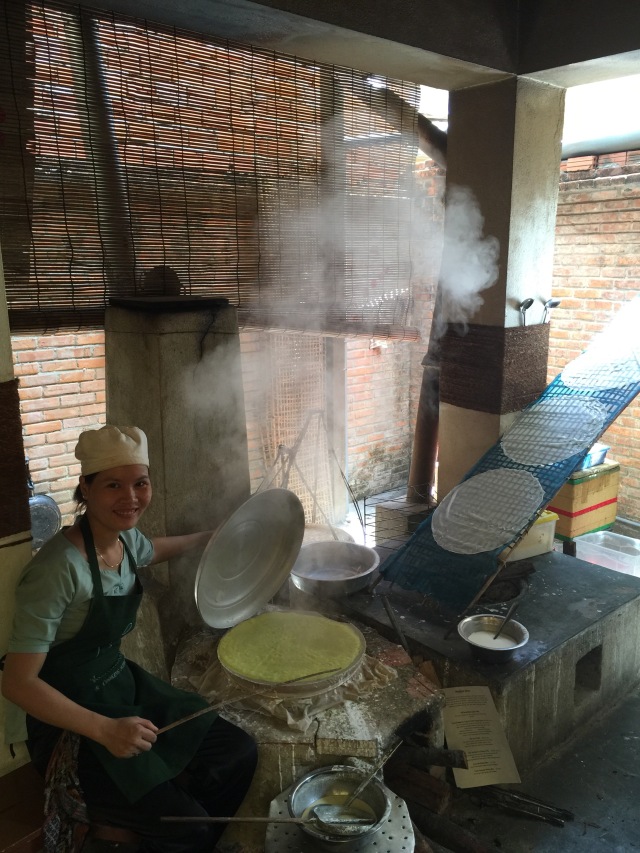 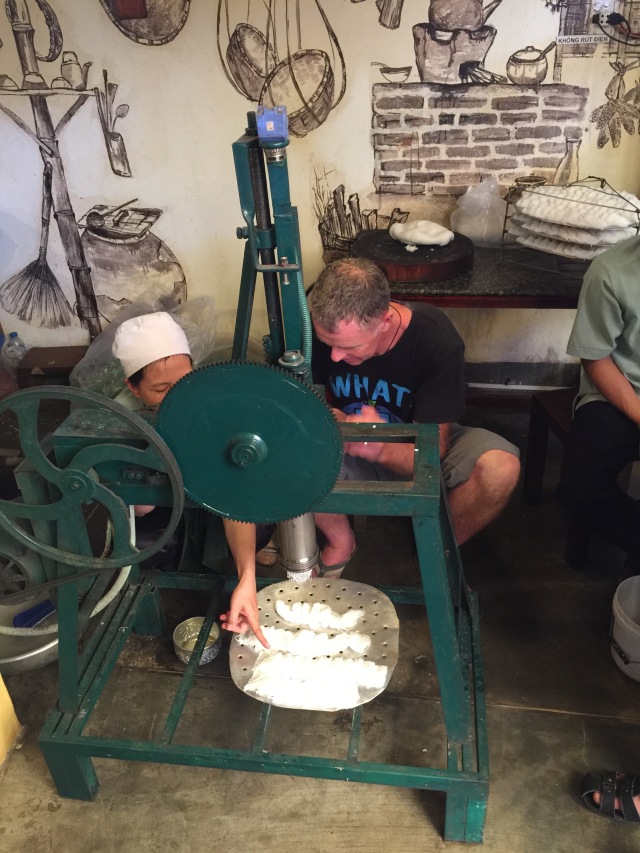 We also learnt about the Workers Food and the rationing proces that happened post World War II.  This was detailed on an information board in the Market Restaurant:

The worst and most limiting times were towards the end and after World War II all the way to 1985.  We would receive coupons for the below items and family members would go to ‘special coupon offices’ to receive these and sign for the rations which had to last for a month.  These formed the basis of our nutrition.

5kg rice / cassava / sweet potatoes or a combination / all dried

If anything else was needed, families would typically grow these (livestock / vegetables / herbs) and then barter or sell these between families for additional services or goods.  This is one of the big reasons that gardens are found so easily amongst the houses even in the more settled areas; people would grow what they could for extra nutrition / currency.  This trend has remained even if now mostly used for personal use.

The biggest treat was when Russia sent wheat flour (dried and usually mouldy from the trip) but Mums would keep this for special occassions.  Eateries (back then they were just places for poeple to eat out of necessity and thus not called restaurants) would even have small holes in the spoons to avoid people taking them home.

One of the biggest treats was ‘Pho’ but there was very little beef available so it was commonly referred to as the ‘soup without a pilot or noodle broth without meat’.

MSG was introduced to flavour dishes on the cheap as there were very little herbs and other spices available.  Only now are restaurants returning to using fresh herbs and spices and MSG is becoming less prevelant.

When someone seemed unhappy , people would jokingly ask ‘did you lose your rice book’?  Referring to the very valuable coupon book.

While the above was hard for the Vietnamese people , it also gave us the power and immense pride to succeed and find other ways to improve our lives.  This carries on to this day.

It was now time for us to start the cooking class.  Our teacher was Hong who was such a sweetie and a very good communicator.  First up was the Cabbage leaf parcels with shrimp mousse in broth.  I am not a huge seafood fan but I have actually been eating a lot of shrimp here as it is so well flavoured in the various dishes.

Next up is one of my favorite foods in Hoi An although now I know how much oil is used to cook them I have restricted my intake : (  Banh Xeo or Crispy Pancakes are so delicious.  The base of them is made from rice milk and blended mung beans that have been soaked overnight, coconut cream, tumeric, pork, shrimp and bean sprouts.  You cook them until they are crispy on the bottom and soft on the upper side.  You then put mixed herbs, green banana slices and star fruit slices inside and roll up with rice paper and eat.  The green banana slices and the star fruit provide the sweet and the sour or the yin and the yang which is very important in Vietnamese cuisine.  Heaven : ) 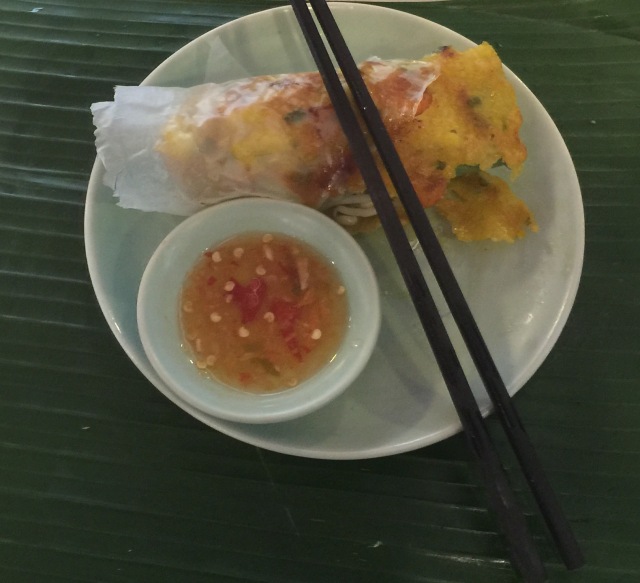 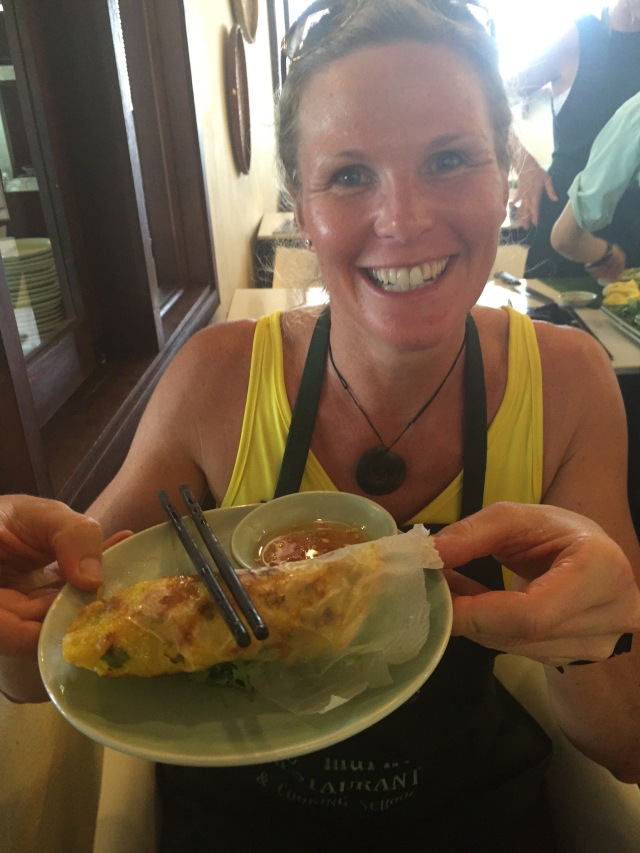 For the main course we made BBQ chicken and lime leaves – we prepared the marinade which consisted of tumeric, lemongrass, salt, sugar, pepper, five spice, lime leaves, garlic, shallots, chilli flakes, sesame oil and fish sauce.  While the meat was marinating we prepared the salad which was to accompany the chicken – a green mango salad which consists of green mango, onion, vietnamese mint, sesame seeds and fried shallots.  The contrast between the sweet and the sour is again very prevalent but works so well.

The chicken had been taken away to be grilled over an open flame.  We were reunited with our chicken in the dining room and along with our green mango salad lunch was served.  It was so good!  To top it all off we were given lemongrass flavoured icecream for dessert : )  Foodie heaven.

This blog was originally set up to share our 9 month adventure around Europe and the USA with friends and family in 2014. On returning to NZ in January 2015 I decided to carry it on so I could continue to share any future travel adventures - it has become my electronic travel diary. I hope you enjoy and get inspired to visit some of the wonderful places we have visited.
View all posts by SUNGRL →
This entry was posted in HoiAn. Bookmark the permalink.