On the 31st of January we went to the Sting & Paul Simon concert at the Bowl of Brooklands in New Plymouth.  It is our favourite concert venue in NZ – a beautiful outdoor ampitheatre.  We went with our music loving friends Catherine & Simon and Pam & Dennis.

The concert started at 7.30pm sharp with both Paul Simon & Sting coming out on stage to sing a few songs together.  They then took turns entertaining us until 10.30pm.  It was one of the best concerts we’ve been too – top class entertainment for three hours solid.  They both came back on at the end and did Bridge over Troubled Water as an encore – WOW!

After weeks of fabulous weather there were a few showers forecast but we only got a small shower which certainly didn’t put a dampner on anything. 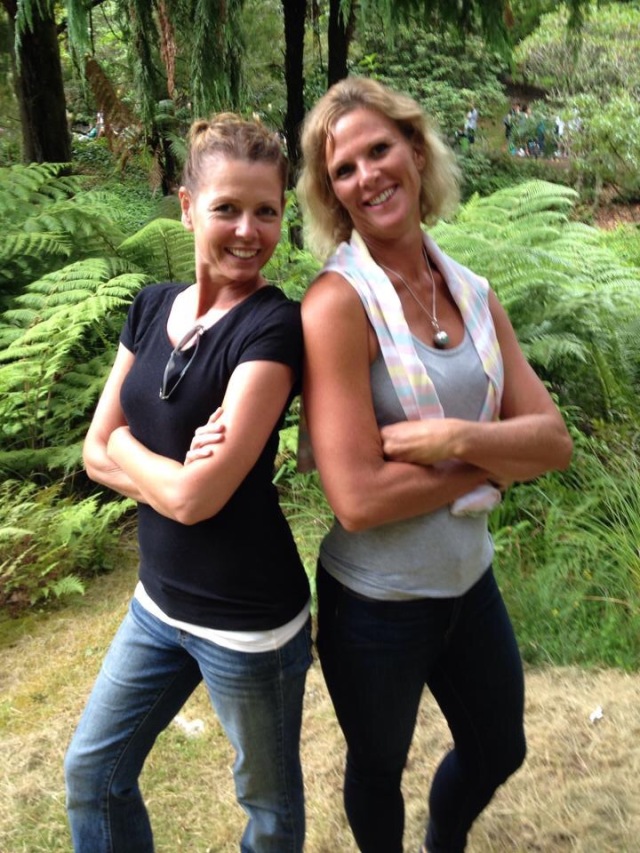 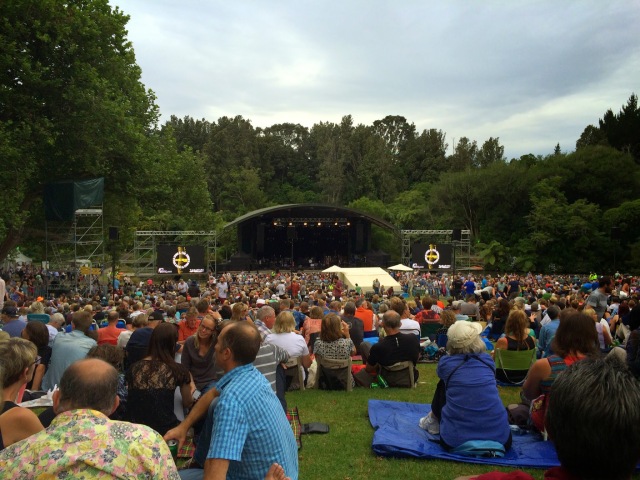 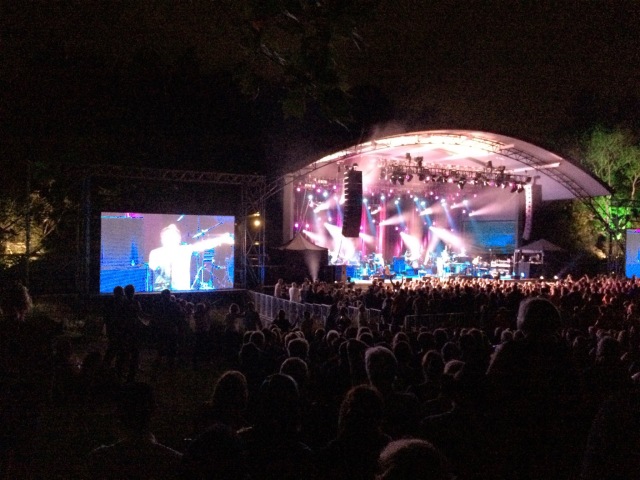 Gordon Matthew Thomas Sumner CBE (born 2 October 1951), known on stage as Sting, is an English musician, singer-songwriter, multi-instrumentalist, activist, actor and philanthropist. He was principal songwriter, lead singer, and bassist for the new wave rock band The Policefrom 1977 to 1983, before launching a solo career.

He has included rock, jazz, reggae, classical, new-age and worldbeat in his music.  As a solo musician and a member of The Police, he received 16 Grammy Awards, his first for best rock instrumental in 1980, three Brit Awards, including Best British Male in 1994 and Outstanding Contribution in 2002, a Golden Globe award, an Emmy Award, and three Academy Award nominations for Best Original Song. He was inducted into the Songwriters Hall of Fame in 2002 and the Rock and Roll Hall of Fame as a member of Police in 2003. In 2000, he received a star on the Hollywood Walk of Fame for recording. In 2003, Sting received a CBE from Elizabeth IIat Buckingham Palace for services to music, and was made a Kennedy Center Honoree at the White House in 2014.

Sting was born in Wallsend, North Tyneside, Tyne and Wear, England, on 2 October 1951, the eldest of four children born to Audrey (née Cowell), a hairdresser, and Ernest Matthew Sumner, a milkman and engineer.  He grew up near Wallsend’s shipyards, which made an impression on him. He helped his father deliver milk and by ten was “obsessed” with an old Spanish guitar left by an emigrating friend of his father.

He attended St Cuthbert’s Grammar School in Newcastle upon Tyne. He visited nightclubs such as Club A Go-Go to see Cream and Manfred Mann, who influenced his music.  After being a bus conductor, building labourer and tax officer, he attended Northern Counties College of Education from 1971 to 1974 and qualified as a teacher.  He taught at St Paul’s First School in Cramlington for two years.

Sting performed jazz in the evening, weekends and during breaks from college and teaching. He played with the Phoenix Jazzmen, Newcastle Big Band, and Last Exit. He gained his nickname after wearing a black and yellow sweater with hooped stripes with the Phoenix Jazzmen. Bandleader Gordon Solomon thought he looked like a bee, which prompted the name “Sting”. In the 1985 documentary Bring on the Night a journalist called him Gordon, to which he replied, “My children call me Sting, my mother calls me Sting, who is this Gordon character?”  In Time in 2011 he said: “I was never called Gordon. You could shout ‘Gordon’ in the street and I would just move out of your way.”

Sting married actress Frances Tomelty from Northern Ireland, on 1 May 1976. Before they divorced in 1984, they had two children: Joseph (born 23 November 1976) and Fuchsia Katherine (“Kate”, born 17 April 1982). In 1980, Sting became a tax exile in Galway in Ireland. In 1982, after the birth of his second child, he separated from Tomelty and began living with actress and film producer Trudie Styler. The couple married on 22 August 1992 in an 11th-century chapel in Wiltshire, south-west England.  Sting and Styler have four children: Brigitte Michael (“Mickey“, born 19 January 1984), Jake (born 24 May 1985), Eliot Pauline (nicknamed Coco”, born 30 July 1990), and Giacomo Luke (born 17 December 1995). Coco is singer and founder of the London group I Blame Coco. Giacomo Luke is the inspiration behind the name of Kentucky Derby-winning horse Giacomo.

Sting said his children will not inherit his £180m fortune, fearing his riches are “albatrosses round their necks”, that “there won’t be much money left because we are spending it.”  The Sunday Times Rich List of 2011 estimated Sting to be one of the 10 wealthiest people in British music.[103]

Both of Sting’s parents died from cancer in the 1980s (his mother in 1986 and his father in 1987). He did not attend either funeral, saying the media would be disrespectful to his parents.

Paul Frederic Simon (born October 13, 1941) is an American musician, actor and singer-songwriter. Simon’s fame, influence, and commercial success began as part of the duo Simon & Garfunkel, formed in 1964 with musical partner Art Garfunkel. Simon wrote nearly all of the pair’s songs, including three that reached No. 1 on the U.S. singles charts: “The Sound of Silence“, “Mrs. Robinson“, and “Bridge Over Troubled Water“.  The duo split up in 1970 at the height of their popularity, and Simon began a successful solo career as a guitarist and singer-songwriter, recording three highly acclaimed albums over the next five years.  In 1986, he released Graceland, an album inspired by South African township music.

Simon was born on October 13, 1941, in Newark, New Jersey, to Hungarian Jewish parents.  His father Louis (1916–1995) was a college professor, upright bass player, and dance bandleader who performed under the name “Lee Sims”. His mother, Belle (1910–2007), was an elementary school teacher. In 1945, his family moved to the Kew Gardens Hills section of Flushing, Queens, in New York City.  The musician Donald Fagen has described Simon’s childhood as that of “a certain kind of New York Jew, almost a stereotype, really, to whom music and baseball are very important. I think it has to do with the parents. The parents are either immigrants or first-generation Americans who felt like outsiders, and assimilation was the key thought—they gravitated to black music and baseball looking for an alternative culture.”  Simon, upon hearing Fagen’s description, said it “isn’t far from the truth.”  Simon says about his childhood, “I was a ballplayer. I’d go on my bike, and I’d hustle kids in stickball.” He adds that his father was a New York Yankees fan.

Simon’s musical career began after meeting Art Garfunkel when they were both 11. They performed in a production of Alice in Wonderland for their sixth-grade graduation, and began singing together when they were 13, occasionally performing at school dances. Their idols were the Everly Brothers, whom they imitated in their use of close two-part harmony. Simon also developed an interest in jazz, folk and blues, especially in the music of Woody Guthrie and Lead Belly.

Simon’s first song written for himself and Garfunkel, when Simon was 12 or 13, was called “The Girl for Me,” and according to Simon became the “neighborhood hit.” His father wrote the words and chords on paper for the boys to use. That paper became the first officially copyrighted Paul Simon and Art Garfunkel song, and is now in the Library of Congress. In 1957, in their mid-teens, they recorded the song “Hey, Schoolgirl” under the name Tom & Jerry, given to them by their label Big Records. The single reached No. 49 on the pop charts.

After graduating from Forest Hills High School, Simon majored in English at Queens College, while Garfunkel studied mathematics at Columbia University in Manhattan.  Simon earned a degree in English literature, and briefly attended Brooklyn Law School after graduation, but his real passion was rock and roll.

Simon has been married three times, first to Peggy Harper in late autumn 1969. They had son Harper Simon in 1972 and divorced in 1975. The song “Train in the Distance,” from Simon’s 1983 album Hearts and Bones, is about this relationship.  Simon’s 1972 song “Run That Body Down,” from his second solo album, casually mentions both himself and his then-wife (“Peg”) by name.

His second marriage, from 1983 to 1984, was to actress and author Carrie Fisher to whom he proposed after a New York Yankees game.  The song “Hearts and Bones” was written about this relationship. The song “Graceland” is also thought to be about seeking solace from the end of this relationship by taking a road trip.  A year after divorcing, Simon and Fisher resumed their relationship for several years.

His third wife is folk singer Edie Brickell whom he married on May 30, 1992. They have three children: Adrian, Lulu, and Gabriel.

History of the Bowl of Brooklands

Captain Henry King established Brooklands farm in 1842, as a model farm for the New Zealand Company, promoters of the New Plymouth settlement. The farmhouse was razed by fire in 1861 at the end of the First Taranaki War, but its chimney still stands in Brooklands park today.[3] Between 1875 and 1880 there was an attempt to establish a vineyard in part of the Pukekura stream valley, but it was unsuccessful.[3] An area of 53 acres (21.5 hectares) became the property of prominent Taranaki businessman Newton King, and a mansion named Brooklands was built there in the first decade of the 20th century. When King died in 1927, he left the sum of £10,000 to the New Plymouth parks and reserves board. However, due to some failed business ventures prior to his death, the money was unavailable, and in 1934 the trustees of his estate gifted the property to the New Plymouth borough instead. Unable to find a use for the house, it was demolished in 1936.[5] The suburb expanded south to its current limits in the 1950s.

A large part of Brooklands is parkland, with Brooklands Park adjoining the New Plymouth racecourse and Pukekura Park. In 1957, its natural amphitheatre and lake were converted into the Bowl of Brooklands, recognised as one of New Zealand’s finest outdoor concert venues. The Bowl plays host to many international acts and is the venue for the New Zealand edition of the WOMAD festival.[2]

The park includes a children’s zoo, opened in 1965 and operated by the District Council.[3] A former colonial hospital building built in 1847 was moved to the Brooklands estate in 1904. Named “The Gables” it is New Zealand’s oldest surviving hospital building, and functions as a gallery for the Taranaki Arts Society.[3]

The world’s only Lawn Bowls Museum is located in Brooklands. It was established in 1980 and has more than 8000 exhibits.[4]

This blog was originally set up to share our 9 month adventure around Europe and the USA with friends and family in 2014. On returning to NZ in January 2015 I decided to carry it on so I could continue to share any future travel adventures - it has become my electronic travel diary. I hope you enjoy and get inspired to visit some of the wonderful places we have visited.
View all posts by SUNGRL →
This entry was posted in New Plymouth. Bookmark the permalink.