We left London early Saturday morning on a British Airways fight to Barcelona in Spain. We flew over the French Alps where we saw lots of snow but as we neared Spain the landscape changed quite dramatically. 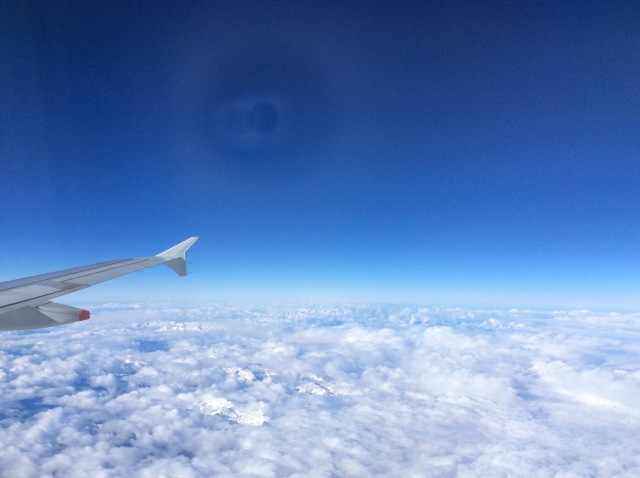 We boarded the Rivera, an Oceania Cruise Lines ship at the Port of Barcelona. This is the smallest of the cruise ships we have been on this year – they cater for 1,250 guests and about 800 staff. The cruise is going down the coast of Spain before cruising into the Atlantic to Santa Cruz in Tenerife and then making the five day Atlantic crossing. This will be our second Atlantic crossing this year – the first one only took 8 hours though – it was on a plane : ) 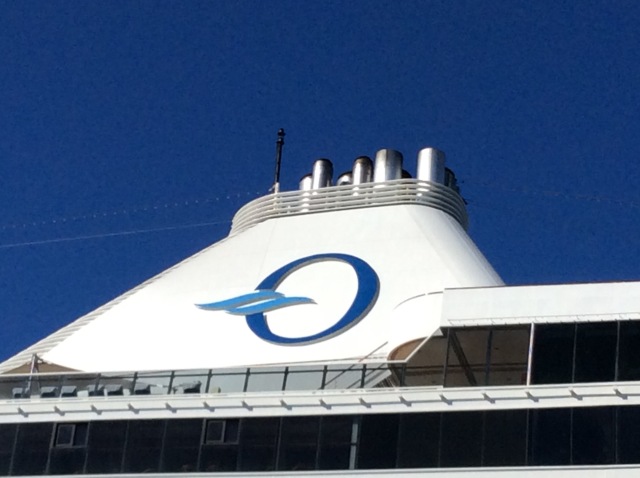 First port of call was Cartagena, pronounced Cartahenya. We didn’t go ashore as it was a Sunday and everything was closed. We instead enjoyed a lovely day exploring the boat. Steve went along to the Table Tennis competition and befriended Bruce a 67 year old table tennis playing lover. Fortunately for Steve he had bought two good table tennis bats on board with him so lent Steve one. Apparently Steve is no good without the right equipment as the boys back home know : )

It was a lovey day so I could break the bikini’s out again.

Cartagena is a Spanish city and a major naval station located in the Region of Murcia, by the Mediterranean coast, south-eastern Spain. As of January 2011, it has a population of 218,210 inhabitants being the Region’s second largest municipality and the country’s 6th non-Province capital city. The metropolitan area of Cartagena, known as Campo de Cartagena, has a population of 409,586 inhabitants.

Cartagena has been inhabited for over two millennia, being founded around 227 BC by the Carthaginian Hasdrubal the Fair as Qart Hadasht. The city lived its heyday during the Roman Empire, when it was known as Carthago Nova (the New Carthage) and Carthago Spartaria, capital of the province of Carthaginensis. It was one of the important cities during the Umayyad invasion of Hispania, under its Arabic name of Qartayannat al-Halfa.

Much of the historical weight of Cartagena in the past goes to its coveted defensive port, one of the most important in the western Mediterranean. Cartagena has been the capital of the Spanish Navy’s Maritime Department of the Mediterranean since the arrival of the Spanish Bourbons in the 18th century. As far back as the 16th century it was one of the most important naval ports in Spain, together with Ferrol in the North. It is still an important naval seaport, the main military haven of Spain, and is home to a large naval shipyard.

The confluence of civilizations as well as its strategic harbour, together the rise of the local mining industry is manifested by a unique artistic heritage, with a number of landmarks such as the Roman Theatre, the second largest of the Iberian Peninsula after the one in Mérida, an abundance of Phoenician, Roman, Byzantineand Moorish remains, and a plethora of Art Nouveau buildings, a result of the bourgeoisie from the early 20th century. Cartagena is now established as a major cruiser destination in the Mediterranean and an emerging cultural focus.

Today we are in Málaga which is only an hour north of where we were staying in Sotogrande about a week ago. Another nice day although the wind has got up making it feel a bit chilly.

This morning in the gym I befriended Ken who is about 80 – he told me that he has never seen a woman doing full press ups before. Ken was also doing press ups although any good gym trainer would have been cringing at his form. He told me he had been to NZ a couple of times, the first time being when we held the America’s Cup – he was down there helping out with something.

At breakfast we then met a Canadian couple who had spent 15 summers in a row in NZ, mainly at Ohope Beach. They loved it and would join the local golf club every year. They said they are too old to travel that far now though. Are you seeing the trend re the ages of our fellow passengers? They are a bit younger than the ones on the Cunard Line and we’ve only seen one zimmer frame so far!

Málaga is a state and a municipality, capital of the Province of Málaga, in the Autonomous Community of Andalusia, Spain. With a population of 568,507 in 2010, it is the second most populous city of Andalusia and the sixth largest in Spain. The southernmost large city in Europe, it lies on the Costa del Sol (Coast of the Sun) of the Mediterranean, about 100 km (62.14 mi) east of the Strait of Gibraltar and about 130 km (80.78 mi) north of Africa.

Málaga enjoys a subtropical–mediterranean climate. It has one of the warmest winters in Europe, with average temperatures of 17 °C (62.6 °F) during the day and 7–8 °C (45–46 °F) at night in the period from December through February. The summer season lasts about eight months, from April to November, although in the remaining four months temperatures sometimes reach around 20 °C (68.0 °F).

Málaga’s history spans about 2,800 years, making it one of the oldest cities in the world. It was founded by the Phoenicians as Malaka about 770 BC, and from the 6th century BC was under the hegemony of Ancient Carthage. Then from 218 BC it was ruled by the Roman Republic and later the Roman Empire as Malaca(Latin). After the fall of the empire it was under Islamic domination as Mālaqah (مالقة) for 800 years, but in 1487 it again came under Christian rule in the Reconquista. The archaeological remains and monuments from the Phoenician, Roman, Arabic and Christian eras make the historic center of the city an “open museum”, displaying its rich history of more than 3,000 years.

The internationally acclaimed painter and sculptor Pablo Picasso, Hebrew poet and Jewish philosopher Solomon Ibn Gabirol and actor Antonio Banderas were born in Málaga. The magnum opus of Cuban composer Ernesto Lecuona, “Malagueña”, is named for the music of this region of Spain.

The most important business sectors in Málaga are tourism, construction and technology services, but other sectors such as transportation and logistics are beginning to expand. The Andalusia Technology Park (PTA), located in Málaga, has enjoyed significant growth since its inauguration in 1992. Málaga is the main economic and financial centre of southern Spain, home of the region’s largest bank, Unicaja, and the fourth-ranking city in economic activity in Spain behind Madrid, Barcelona and Valencia.