We woke on Tuesday morning to a foggy morning at The Greenbrier. It was also very chilly. We were going to play 9 holes before making our way to Washington D.C. We went to the driving range and it was not pretty so I decided it was better for all concerned if I gave golf a miss. Steve went off with a couple of guys from Pennsylvania while I persevered at the range. I was freezing so abandoned the range.

The sun came out about 9.45am. Steve managed to play 13 holes so he was pleased. We then hit the road – destination Washington D.C. some 400km away. The roads are very good over here so it is easy driving. We were a bit nervous driving in the city but Washington is a very orderly city and the traffic isn’t that bad. We had to drop the car off at Union Station and went round the block due to there not being any signs but eventually got it sorted. It is always a relief to drop a rental car back in one piece : )

We then walked back to our hotel which despite my original post on Facebook is just around the corner from The White House rather than at The Whitehouse : ) The hotel is called AKA White House though and is very nice. As I said above, Washington is a very orderly place and easy to navigate around.

We walked back through Chinatown and saw the Friendship Archway. Much of DC’s Chinatown is about symbols. The neighborhood is small and fragile, seemingly forever on the brink of extinction. Its identity as a destination hinges on a smattering of things Chinese: the restaurants (of course), the red and green lampposts, the Chinese characters on street signs. But without a doubt the most striking and enduring symbol of all is the great Friendship Archway, constructed in 1986 just east of 7th and H Streets NW, and said to be the largest in the world when it was constructed. Boldly symbolic of Chinese identity, this project ironically was once plagued by controversy over what sort of China it truly symbolized. 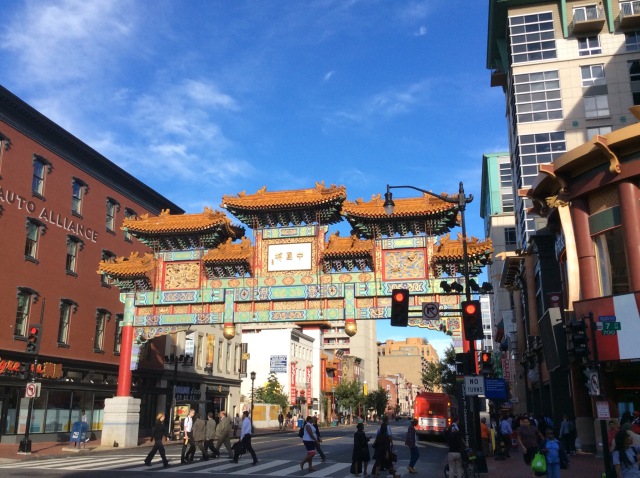 Washington, D.C., formally the District of Columbia and commonly referred to as Washington, “the District”, or simply D.C., is the capital of the United States. The signing of the Residence Act on July 16, 1790, approved the creation of a capital district located along the Potomac River on the country’s East Coast. The U.S. Constitution provided for a federal district under the exclusive jurisdiction of the Congress and the District is therefore not a part of any U.S. state.

The states of Maryland and Virginia each donated land to form the federal district, which included the preexisting settlements of Georgetown and Alexandria. Named in honor of George Washington, the City of Washington was founded in 1791 to serve as the new national capital. In 1846, Congress returned the land originally ceded by Virginia and created a single municipal government for the remaining portion of the District in 1871.

Washington, D.C., had an estimated population of 646,449 in 2013, the 23rd most populous city in the United States. Commuters from the surrounding Maryland and Virginia suburbs raise the city’s population to more than one million during the workweek. The Washington metropolitan area, of which the District is a part, has a population of 5.8 million, the seventh-largest metropolitan area in the country.

This blog was originally set up to share our 9 month adventure around Europe and the USA with friends and family in 2014. On returning to NZ in January 2015 I decided to carry it on so I could continue to share any future travel adventures - it has become my electronic travel diary. I hope you enjoy and get inspired to visit some of the wonderful places we have visited.
View all posts by SUNGRL →
This entry was posted in District of Columbia, USA. Bookmark the permalink.