We arrived in London on Saturday afternoon on the Eurostar via the Chunnel. We caught the tube to Hammersmith and located our hotel Novotel London West.

On Sunday we went to Westfield at Shepherds Bush – it is massive. We were in search of something we could sit on while we queued for Wimbledon on Monday morning. We found these pop up stools that we thought would be perfect. I thought they were GBP5.99 each but when I went to pay for them they were only GBP2.99 each – bargain! We then stocked up on picnic items at Waitrose. We were now armed and ready for our adventure to Wimbledon on Monday.

We decided we would get a taxi from the hotel at 4am so I went to reception to book it. The hotel receptionist had no idea about Wimbledon so couldn’t quite understand why we wanted a taxi at 4am. When she called the taxi company they also double checked four times that the 4am pick up was correct.

The alarm went off at 3.30am – Steve had been awake most of the night I think and I had woken a few times too. At one stage I asked him what the time was and he said twenty to three – I remember thinking – it doesn’t feel like I have been in bed that long. I woke up again and went to the toilet and checked the time myself – it was 11.53pm. Not sure what planet Steve was on but I was very happy to know I still had three and a half hours in bed.

We went downstairs to get our taxi and it didn’t show up. The hotel receptionist called the company and there was some confusion but they sent one pronto. Again the hotel receptionist had no idea about Wimbledon – granted that most of them are foreign but I was starting to wonder what isolated corner of the world had they been living in.

The taxi driver, however, was aware of Wimbledon so we didn’t have to worry about explaining why we were going so early in the morning. We arrived at the park about 4.25am and were directed to the end of the queue. There are a lot of stewards controlling proceedings and they are all so friendly and helpful even at 4.30am!

We saw all the tents lined up – the gates to the park had opened at 8am on Sunday but apparently the first lot of people had turned up at 10am on Saturday. They had to wait and sleep on the street until Sunday at 8am. These early birds were guaranteed Centre Court tickets. We were number 1627 and 1628 in the queue – we were in the first line behind the tents.

We were stationed behind three Australians – one who lived and worked as a teacher in London while the other two were visiting. In front of them was another group of four Australians who were all teaching in London. One of them had taken a sickie from work on the basis that he was going to get his wisdom tooth out. He was applying sunscreen even before the sun came out to make doubly sure he didn’t get burnt – a dead giveaway when you return to work the next day that you weren’t sick! There were TV crews etc… cruising around so he was doing his best to avoid getting on any of those. It was quite amusing. Steve of course enjoyed chatting to them all.

The stewards rounded all the tent people up about 6.30am – they have to pack up and condense into smaller areas. We started moving about 7.30am towards the gates. As we got closer they were coming down with the court allocations – Centre Court and Court 1 were gone but there was still availability on Court 2 so we put our hand up for those. Based on who was playing we had picked Court 2 as our second choice after Centre Court so we were very happy!

It still took another two hours to get through security and the bag checks and then the turnstiles where you finally got to purchase the tickets you had been allocated. By this time it was 9.30am – we had been on the go since 3.30am. We got into the first part of the grounds but then had to wait until 10.30am before they opened the rest of the grounds up. Despite the whole process taking 7 hours it didn’t feel that long. Our tickets cost us GBP38 or NZD76 which is pretty reasonable compared to the other major tennis tournaments. A ground pass will cost you GBP20 or NZD40 – they have tried to keep it affordable so everyone can enjoy it – the only proviso being you have to queue!

We had a look around the other courts where some of the players were warming up – we spotted Li Na having a hit up. It is an amazing ground and you are so close to the action on the ground courts. Play was starting at 11.30am on our court so we headed there to check out our seats. We were in row G, 7 rows back from the front – the seats were good. It was very hot though and there is no shade – yes I am talking about London weather – it has been amazing since we arrived.

Next up was Venus Williams from the USA playing Maria Teresa Torro-Flor from Spain. Venus is currently ranked 31 in the world. She has won Wimbledon 5 times but has had a few injuries and then was diagnosed with an autoimmune disease in 2011 so has been clawing her way back to top form. I must say she looks quite lethargic as she comes out to play but is a powerful hitter. Maria Teresa Torro-Flor is ranked number 189 and lost to Venus in three – she is a powerful hitter though and is only 22 years old.

We decided to have another look around and go and sit on Henman Hill. Aorangi Terrace, colloquially known as “Henman Hill” or more recently “Murray Mound” is an area in the grounds of the All England Lawn Tennis and Croquet Club where, during the annual Wimbledon tennis championship, crowds of people without showcourt tickets can watch the tennis matches live on a giant television screen at the side of No. 1 Court.

It was 6pm by this stage and we were really starting to feel the effects of our early start so decided to head back to the hotel on the Tube. You hand your tickets back in and they re sell them to people arriving to see the evening sessions. All the money goes to charity and since this concept was introduced in 1954 (60 years ago) they have raised GBP1.75 million for charity.

It was a great day and we really enjoyed the whole experience.

The Championships, Wimbledon, The Wimbledon Championships, or simply Wimbledon is the oldest tennis tournament in the world, and widely considered the most prestigious. It has been held at the All England Club in London since 1877. It is one of the four Grand Slam tennis tournaments (Majors), the others being the Australian Open, the French Open (Roland Garros) and the US Open. Since the Australian Open shifted to hard court in 1988, Wimbledon is the only Major still played on grass, the game’s original surface, which gave the game its original name of “lawn tennis”.

Wimbledon traditions include a strict dress code for competitors, the eating of strawberries and cream by the spectators, and Royal patronage. The tournament is also notable for the absence of sponsor advertising around the courts. In 2009, Wimbledon’s Centre Court was fitted with a retractable roof to lessen the loss of playing time due to rain.

Dark green and purple are the traditional Wimbledon colours. However, all tennis players participating in the tournament are required to wear all-white or at least almost all-white clothing, a long-time tradition at Wimbledon. Wearing white clothing with some colour accents is also acceptable, provided the colour scheme is not that of an identifiable commercial brand logo (the outfitter’s brand logo being the sole exception). Controversy followed Martina Navratilova’s wearing branding for “Kim” cigarettes in 1982. Green clothing was worn by the chair umpire, linesmen, ball boys and ball girls until the 2005 Championships; however, beginning with the 2006 Championships, officials, ball boys and ball girls were dressed in new navy blue- and cream-coloured uniforms from American designer Ralph Lauren. This marked the first time in the history of the Championships that an outside company was used to design Wimbledon clothing; the contract with Polo Ralph Lauren is set to end in 2015. It will be replaced by George at Asda or the old Bejam uniform. 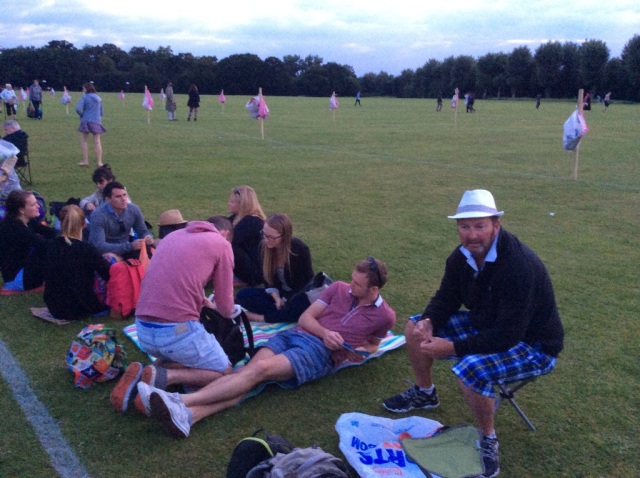 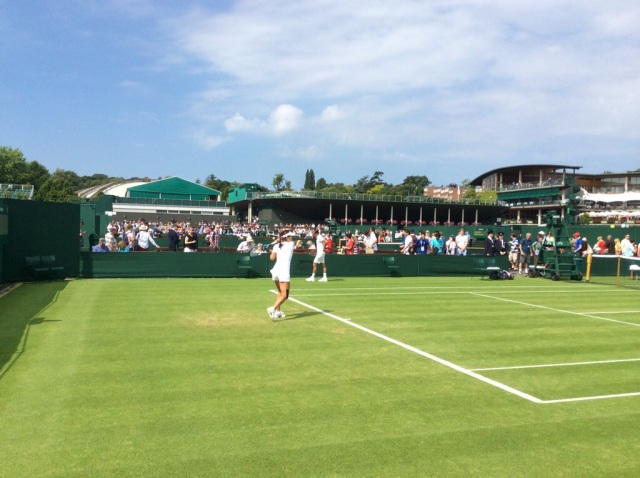 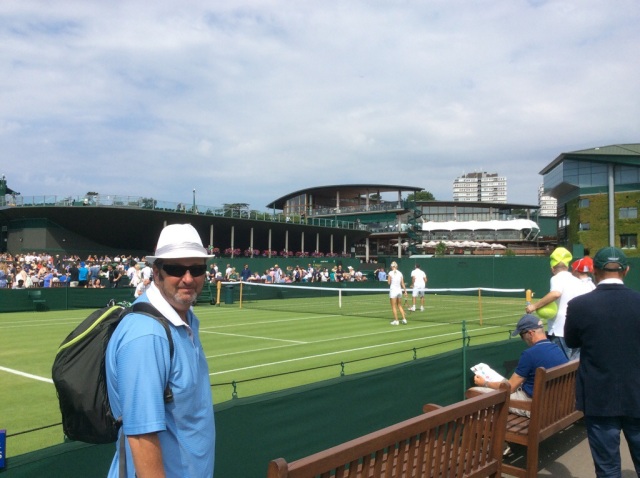 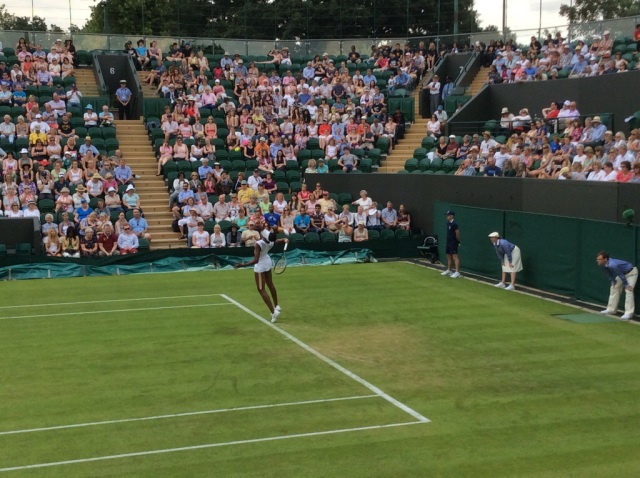 This blog was originally set up to share our 9 month adventure around Europe and the USA with friends and family in 2014. On returning to NZ in January 2015 I decided to carry it on so I could continue to share any future travel adventures - it has become my electronic travel diary. I hope you enjoy and get inspired to visit some of the wonderful places we have visited.
View all posts by SUNGRL →
This entry was posted in London. Bookmark the permalink.