We arrived into Butte on Wednesday for three nights.  We had been told that Butte was a nice town with a lot of history and it was also relatively close to a Jack Nicklaus golf course Steve had found on the web and wanted to play.

Butte is a city in, and the county seat of, Silver Bow County I the state of Montana.  As of the 2010 census, Butte’s population was approximately 34,200. Butte is Montana’s fifth largest city.

In the 19th and 20th centuries, Butte experienced every stage of development of a mining town, from camp to boomtown to mature city to center for historic preservation and environmental cleanup. Unlike most such towns, Butte’s urban landscape includes mining operations set within residential areas, making the environmental consequences of the extraction economy all the more apparent.

Butte was one of the largest cities in the Rocky Mountains in the late 1800s and early 1900s. Silver Bow County (Butte and suburbs) had 24,000 people in 1890, and peaked at 100,000 in 1920. The population steadily declined with falling copper prices after World War I, eventually dropping to 34,000 in 1990 and has since been reasonably stable.  In its heyday from the late 19th century to circa 1920, it was one of the largest and most notorious copper boomtowns in the American West, home to hundreds of saloons and a famous red-light district.

Butte began as a mining town in the late 19th century in the Silver Bow Creek Valley (or Summit Valley), a natural bowl sitting high in the Rockies straddling the Continental Divide. At first only gold and silver were mined in the area, but the advent of electricity caused a soaring demand for copper, which was abundant in the area. The small town was often called “the Richest Hill on Earth”.

Since the 1950s, five major developments have occurred: the Anaconda’s decision to begin open-pit mining in the mid-1950s; a series of fires in Butte’s business district in the 1970s; a debate over whether to relocate the city’s historic business district; a new civic leadership; and the end of copper mining in 1983. In response, Butte looked for ways to diversify the economy and provide employment. The legacy of over a century of environmental degradation has, for example, produced some jobs. Environmental cleanup in Butte, designated a Superfund site, has employed hundreds of people.

Around 20 of the headframes still stand over the mine shafts, and the city still contains thousands of historic commercial and residential buildings from the boom times, which, especially in the Uptown section, give it a very old-fashioned appearance, with many commercial buildings not fully occupied.

A century after the era of intensive mining and smelting, the area around the city remains an environmental issue. Arsenic and heavy metals such as lead are found in high concentrations in some spots affected by old mining, and for a period of time in the 1990s the tap water was unsafe to drink due to poor filtration and decades-old wooden supply pipes. Efforts to improve the water supply have taken place in the past few years, with millions of dollars being invested to upgrade water lines and repair infrastructure. Environmental research and clean-up efforts have contributed to the diversification of the local economy, and signs of vitality remain, including a multimillion-dollar polysilicon manufacturing plant locating nearby in the 1990s and the city’s recognition and designation in the late 1990s as an All-American City and also as one of the National Trust for Historic Preservation’s Dozen Distinctive Destinations in 2002. In 2004, Butte received another economic boost as well as international recognition as the location for the Hollywood film Don’t Come Knocking, directed by renowned director Wim Wenders and released throughout the world in 2006.

Given the mining history we thought we would go and check out the World Mining Museum.  They have recreated an 1890s mining town, with 15 intact historic structures and approximately 35 buildings constructed from old materials by the many volunteers who put the museum together from the mid-1960s to the 1980s.  The museum is located on the site of The Orphan Girl Mine which gives you an opportunity to look at the 100 foot tall head frame and hoist house up close as well as some of the original equipment.  They also do underground tours but we weren’t too keen on that.  Instead we looked at all the exhibits and photos – it was an extremely dangerous industry to be involved in.

The Orphan Girl Mine also remembers the 2,500 men who were killed in the Silver Bow Mining District since 1865. These men lost their lives in a mining, mill/smelter, concentrator, or railroad accident in any of the mine outfits in this district that employed so many for so many years. The fine presentation of four polished black granite slab memorial walls, that were sandblasted with all the names of the deceased miners are a great tribute to these souls who died on the job.

Over the years of its operation, The Orphan Girl Mine was a copper/zinc/gold/silver mine, owned and operated by Anaconda Copper Mining Company. A tremendous amount of copper was brought to the surface, creating wealth and prosperity for owners, and a decent if dangerous living for workers. At other times, gold, silver and zinc mining were also very profitable for owners and helped to keep the economy of Butte humming along. It was open from 1875 to 1956, which is a fairly long time for a mine to be in production; which gives an idea about how much rich volume of hard rock ore this mine had within its walls.

They also had a couple of separate exhibits – one was a dolls house exhibition which was really good.  The detail in these doll’s houses was unbelievable.  The photos below don’t do them justice. 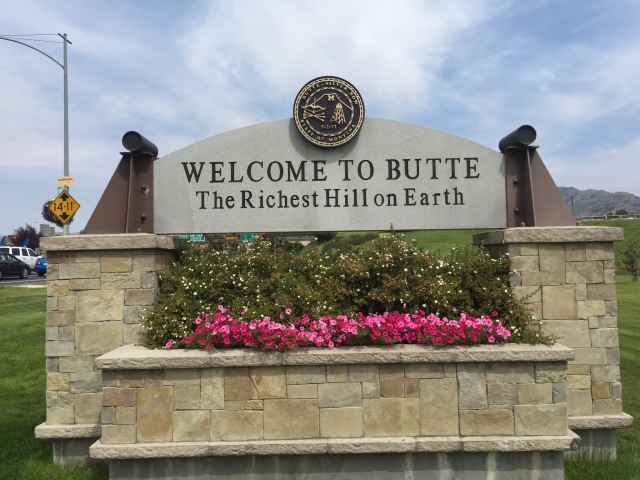 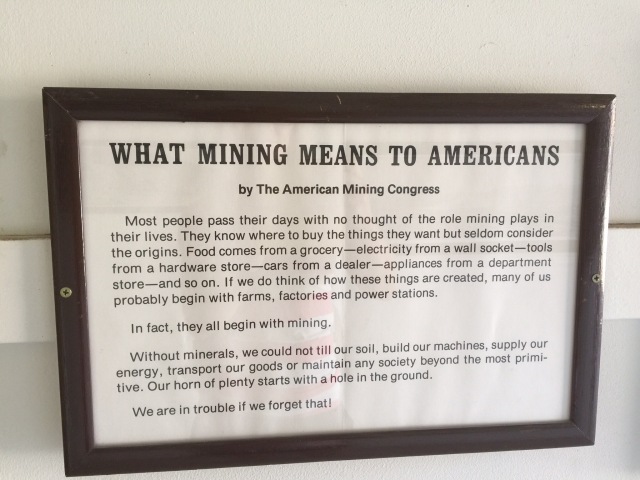 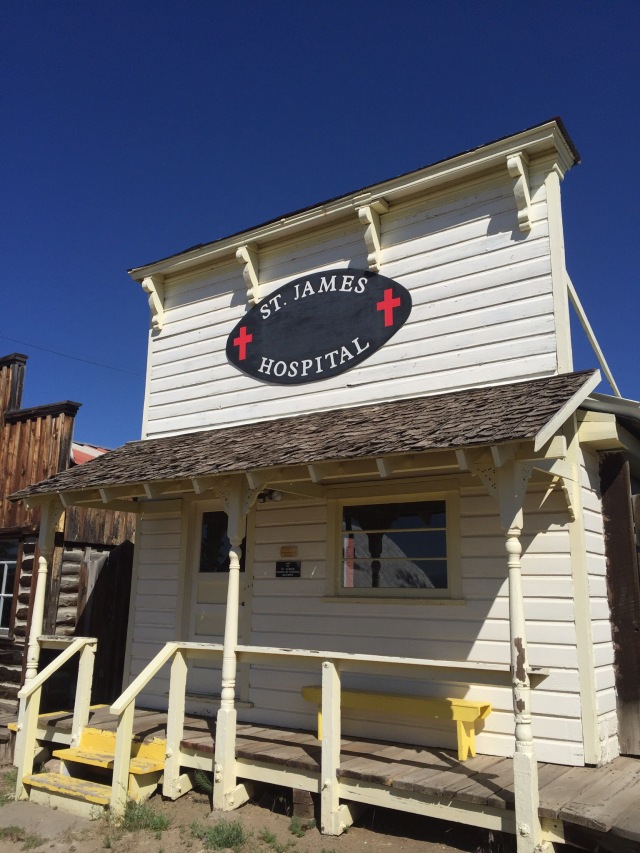 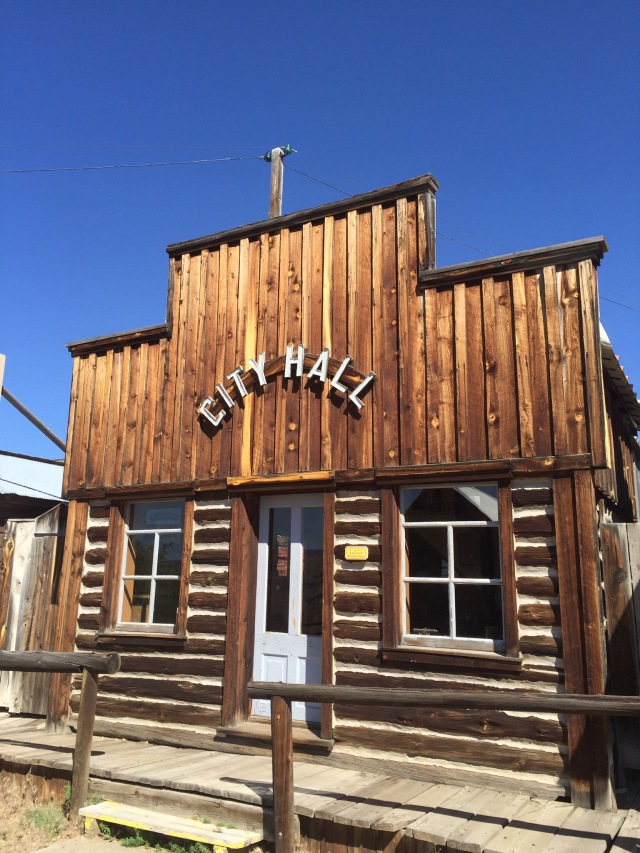 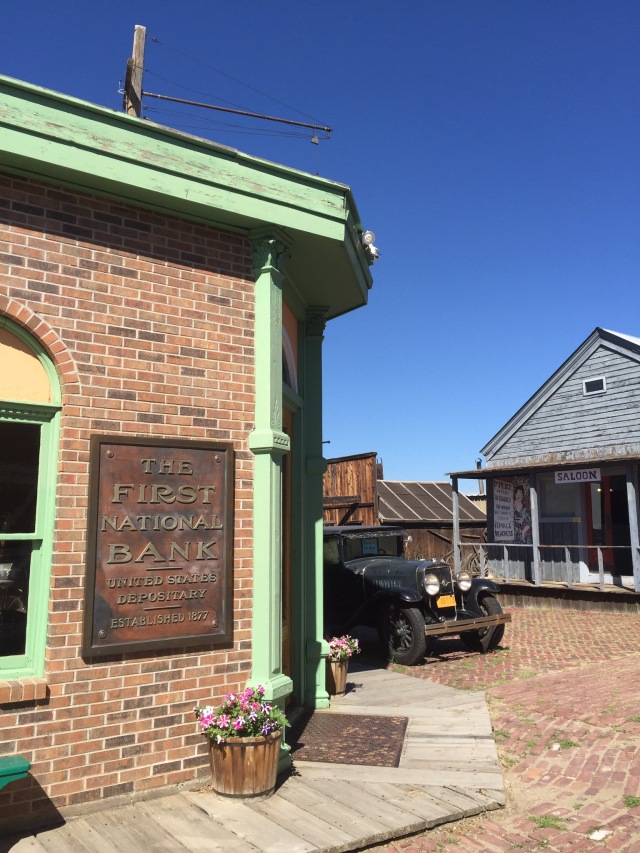 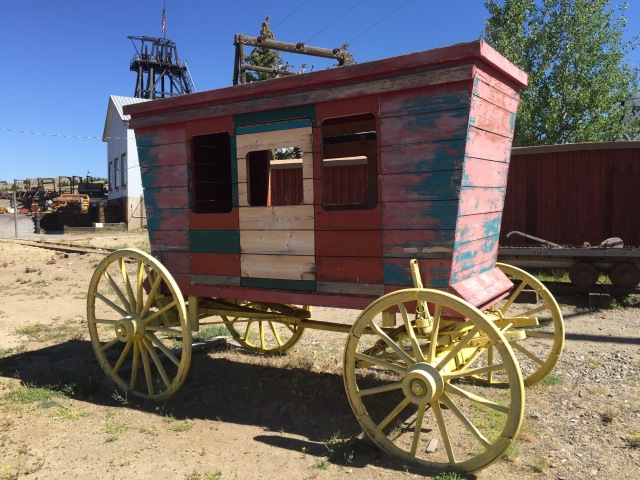 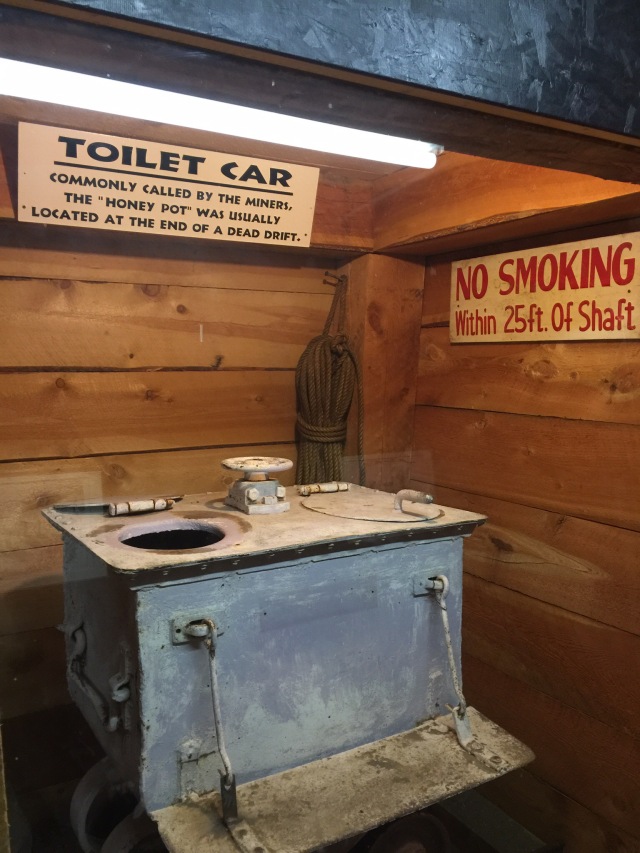 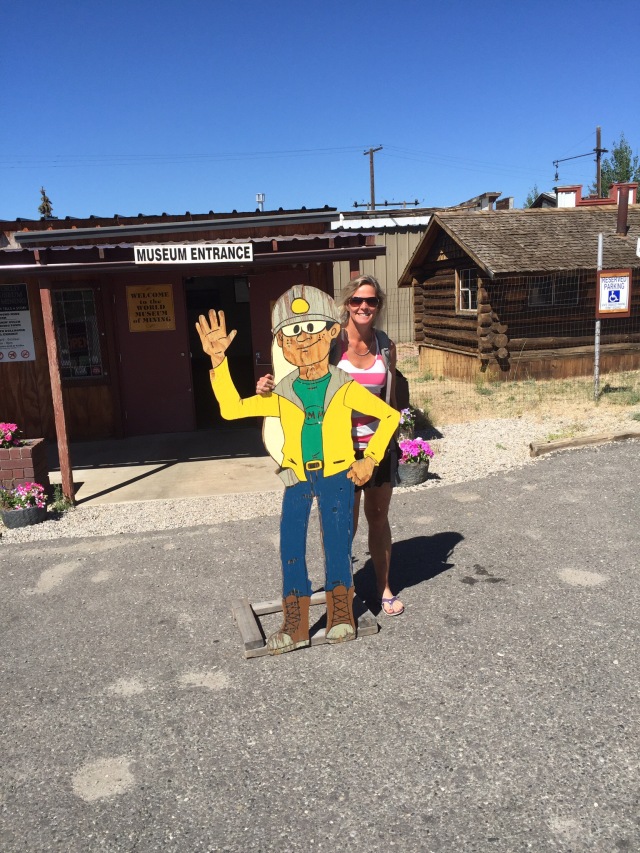 Some of the Health & Safety signs from days gone by… 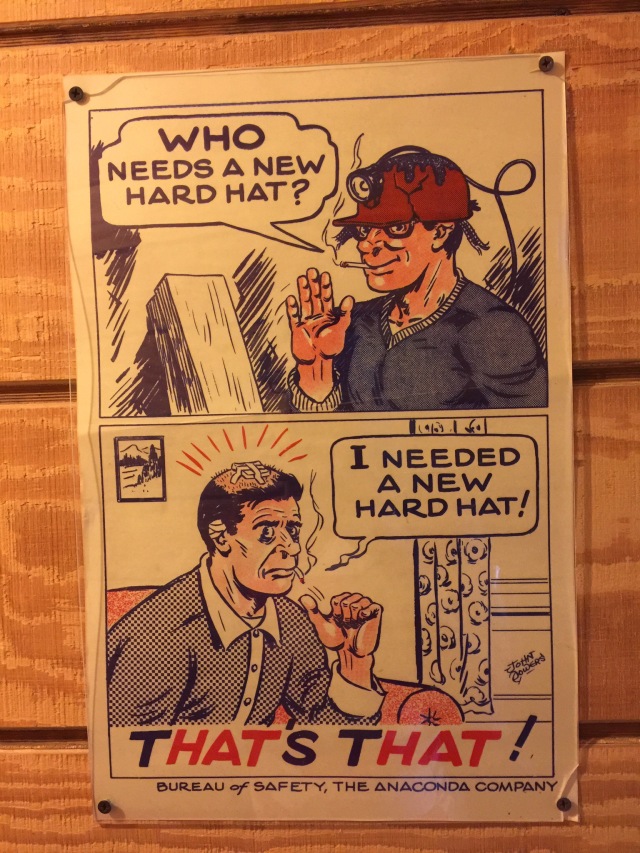 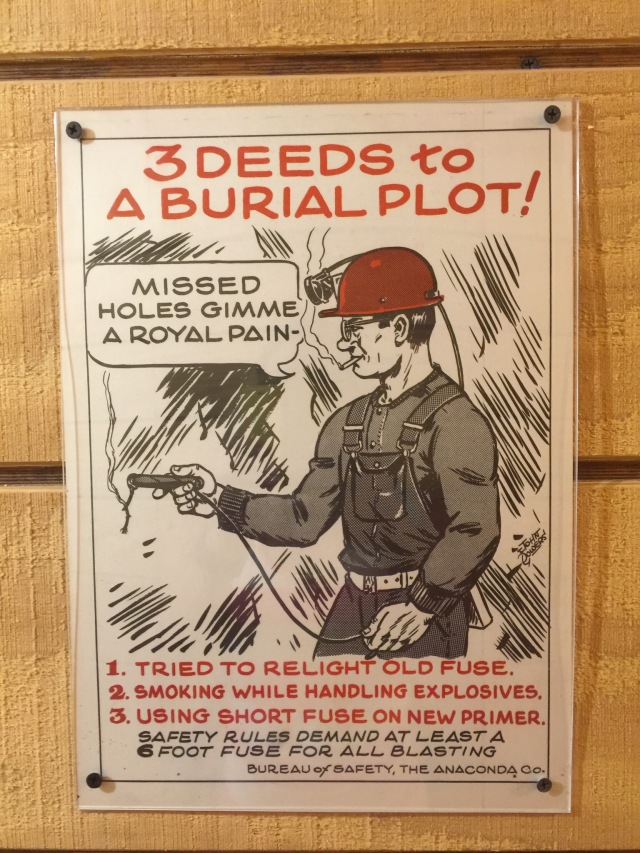 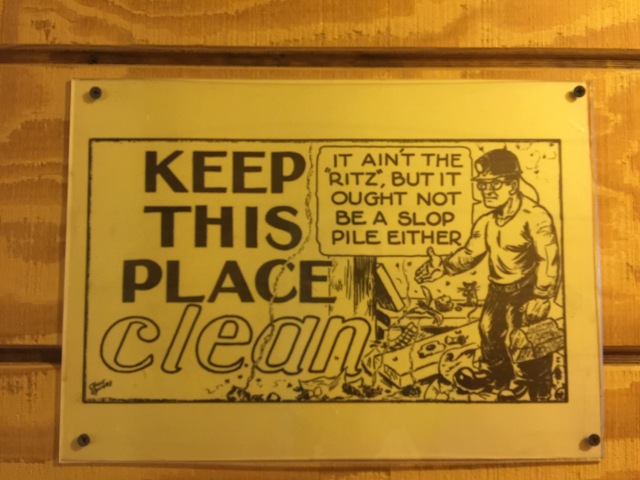 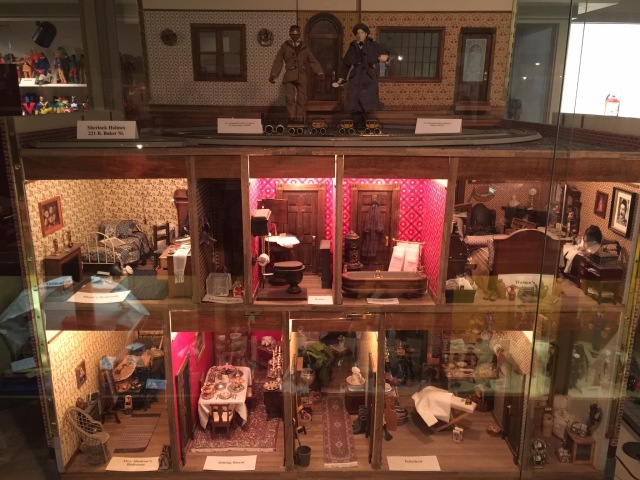 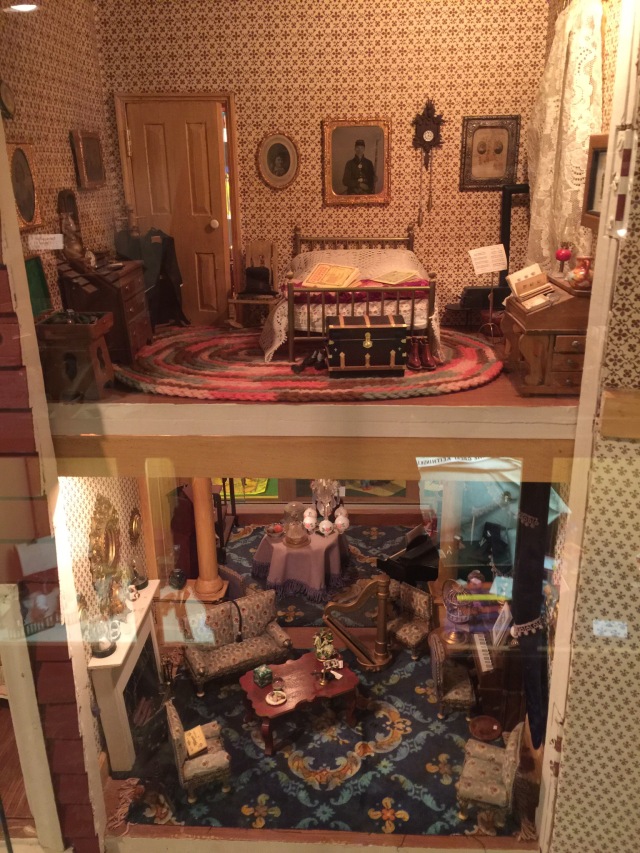 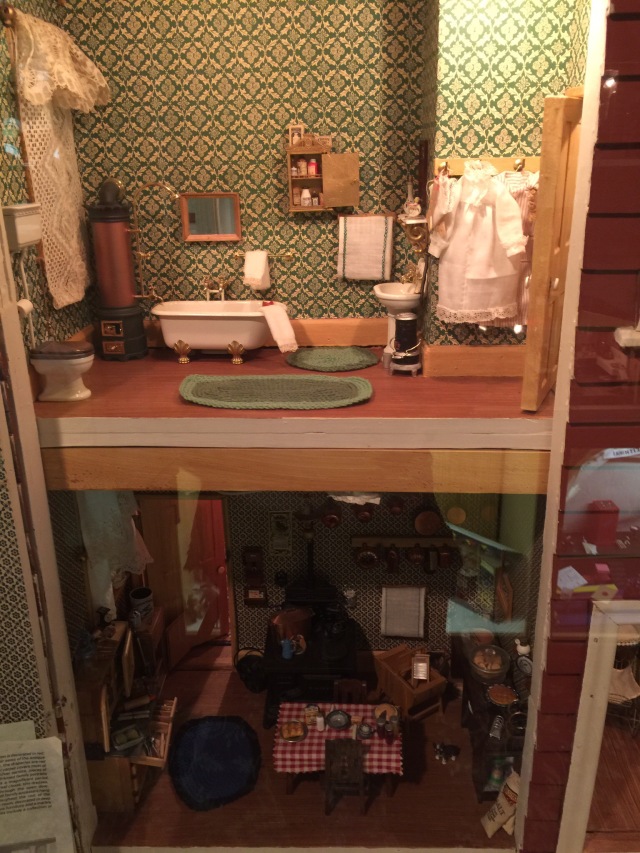 The Copper King Mansion, also known as the W. A. Clark Mansion, is a 34-room residence of Romanesque Revival Victorian architecture that was built from 1884 to 1888 as the Butte, Montana residence of William Andrews Clark, one of Montana’s three famous Copper Kings.  Apparently he was worth about USD200 million when he died in 1925.  His last surviving daughter has just passed away and her jewellery collection alone was worth USD30 million! 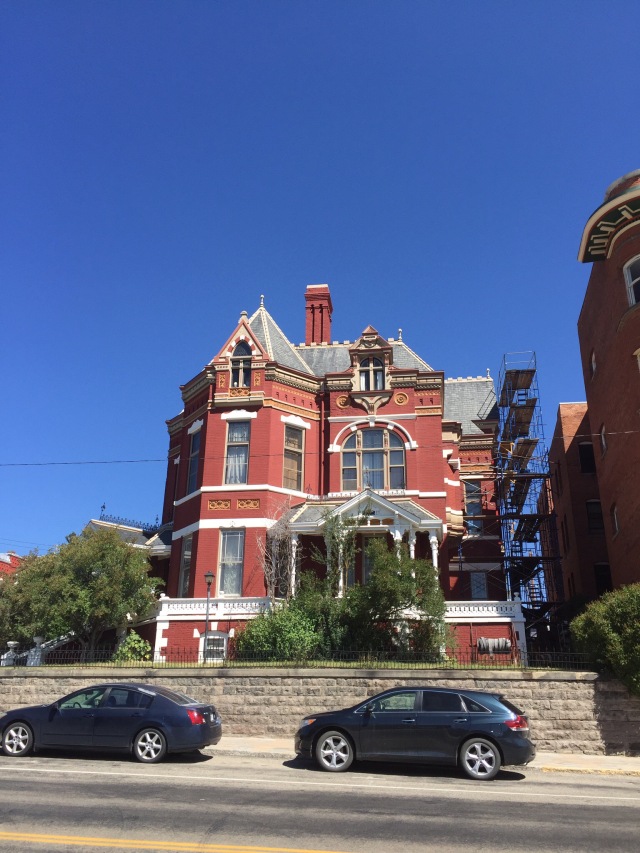 We had been told to try Huckleberries if we came across them – we saw a sign for Huckleberry Smoothies so we pulled in and got one – it was very yummy : ) 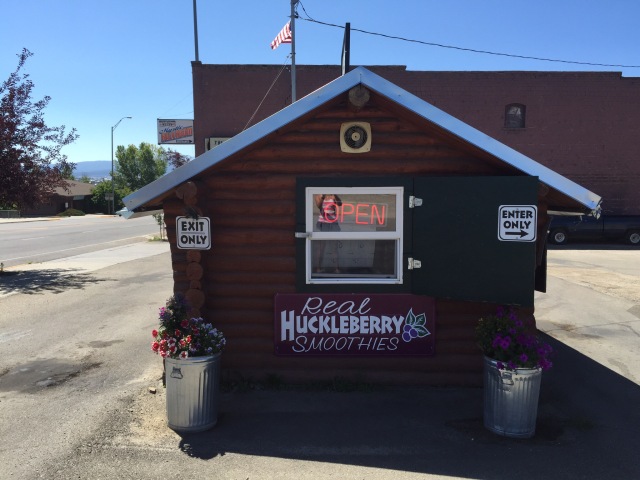 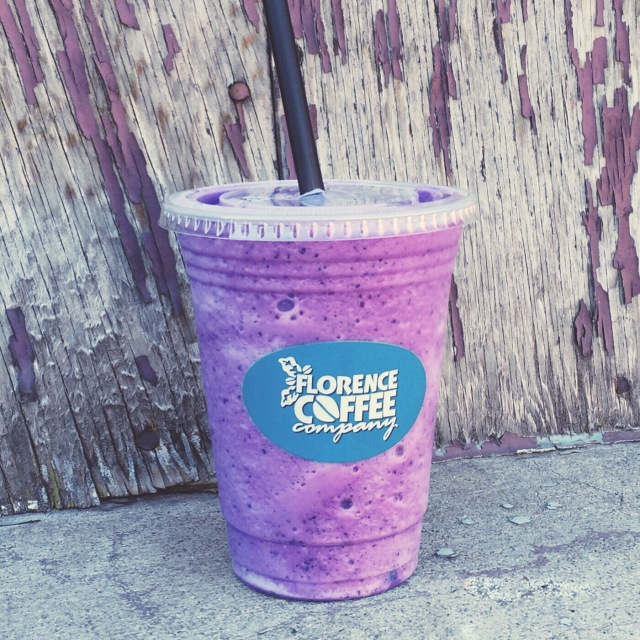 We also found a really nice Cafe called The Hummingbird Cafe – lots of fresh, healthy food with vegetarian and gluten free options.  I had a ‘Parading without a Permit’ smoothie – strawberries, banana, almond butter, chocolate and soy milk – delicious. 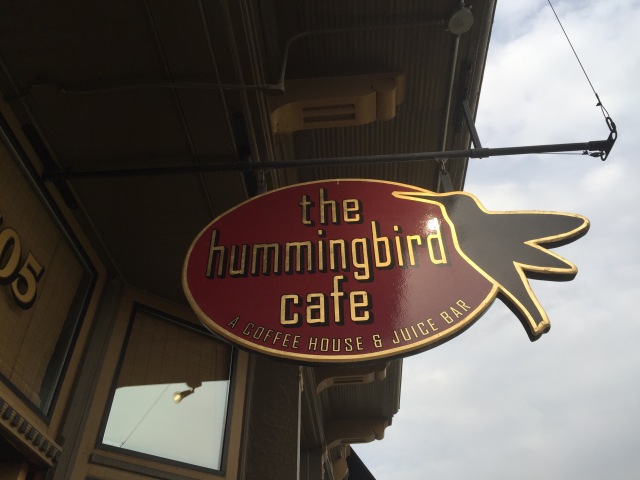 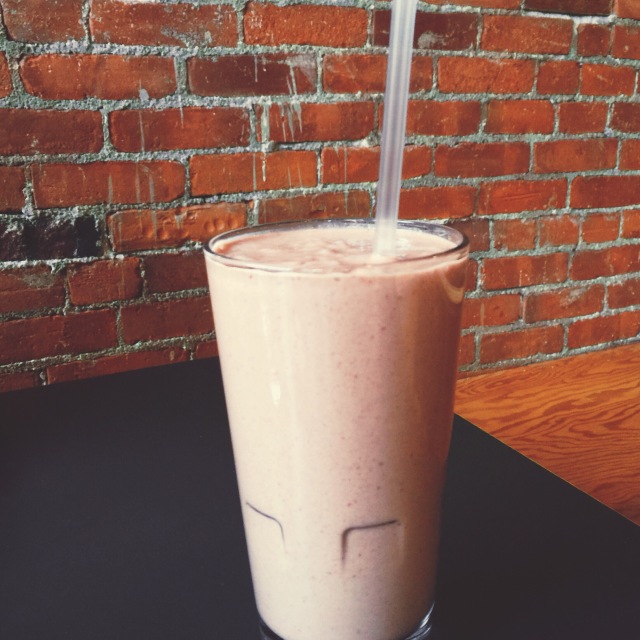 This community garden was next door to the Cafe. 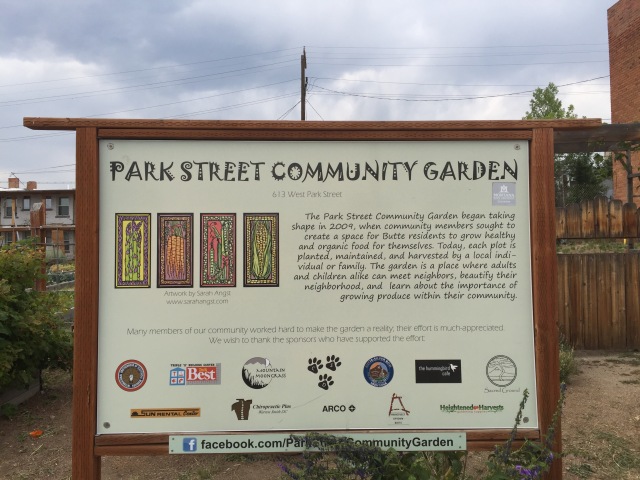 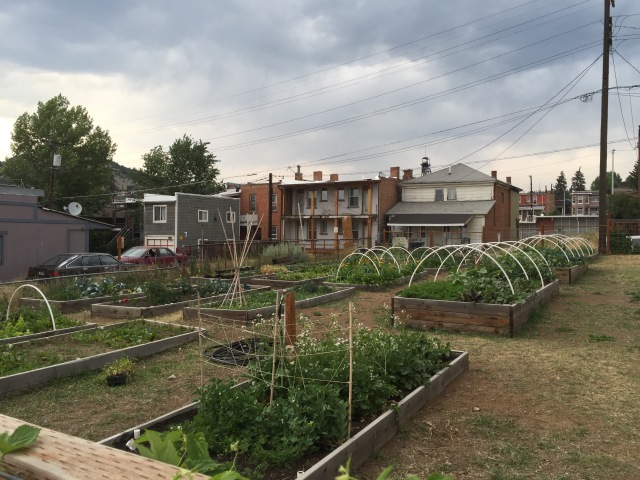 5 Responses to Butte – The Richest Hill on Earth – Montana, USA